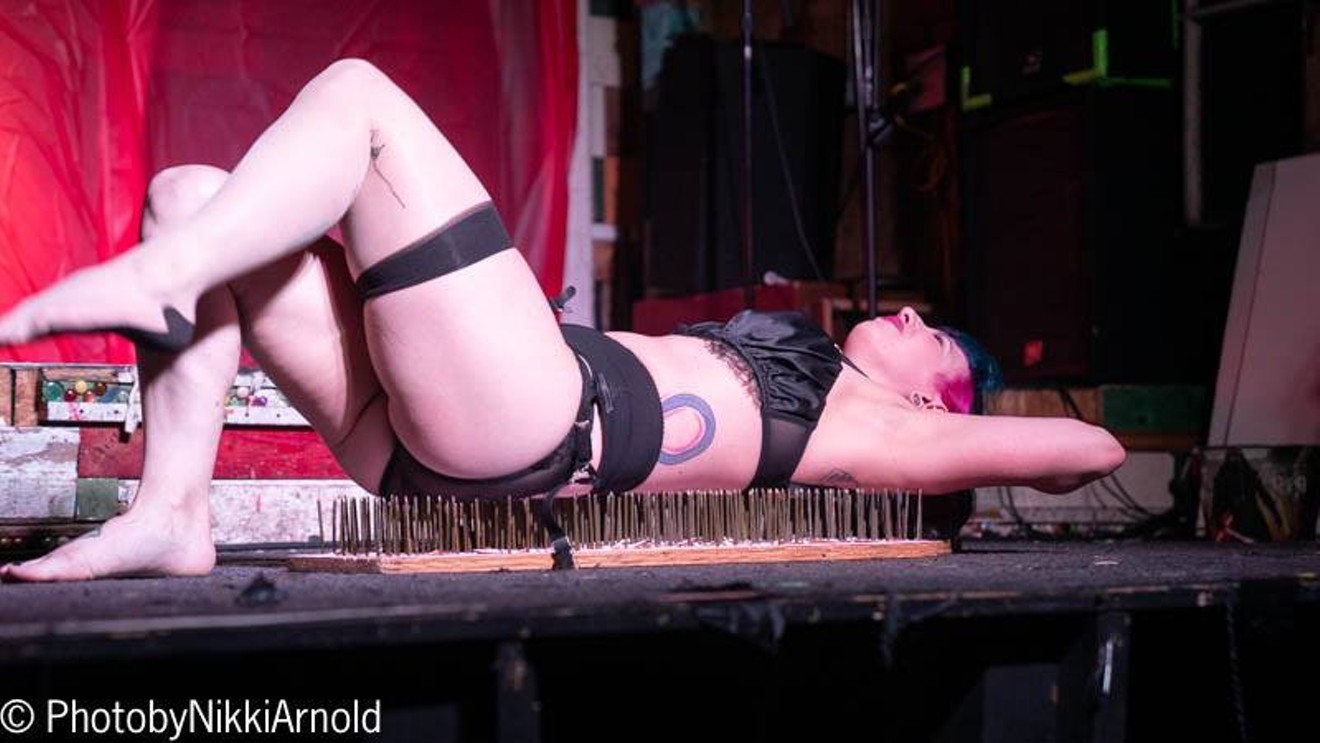 Performer and Deadly Sins Burlesque founder Janie Slash lies on a bed of nails during the show at Wits End in Deep Ellum. Nikki Arnold
The Deadly Sins Burlesque show is a variety show in one of the strictest senses of the word. The monthly burlesque and sideshow showcase held at Wits End in Deep Ellum starts out with beautiful burlesque dance performances. Then it immediately switches to the darker side of entertainment with bizarre acts of human risk — like walking on the sharp ends of swords, jumping on broken glass or, like one performer, snorting a condom through her nose and pulling it out of her mouth.

"We try to keep a variety for some people who want to see more traditional burlesque and the stuff where people ask, 'Why would they do that?'" says performer and show producer and founder Janie Slash. "I like to push the envelope and make them think, 'Is that sexy?'"

It gets weirder from there. The show's emcee is a stilt-walking Satan played by Jay Gavit.

"People were really shocked when we put out our first flyer because we said our show was hosted by Satan," Slash says.

Janie Slash (right) and Ranye Drawps perform a burlesque tribute to the horror anthology film Creepshow.
Nikki Arnold
Deadly Sins Burlesque might sound perfect for the Halloween holiday, but this show runs year-round on the third Saturday of every month at Wits End, and it's been in constant rotation for the last six years. The show started as a "happy accident," Slash says.

"I was starting my burlesque career and ran into a friend [Jyn McCoy] who worked at a bar called Wits End and I had some really cool friends who were burlesque dancers and sideshow performers," Slash says. "I talked to the owner [Matt Adkins], and it went really well and the bar was like, 'Come back two weeks later' and we started putting on a show every month."

The first event drew a massive crowd and the show got subsequently bigger and bigger every month.

"It was supposed to be a one-time thing that turned into a six-year thing," Slash says.

Slash says she got into sideshow performing after becoming a burlesque dancer. One of her venues invited sideshow performer Della Deadgirl, who did all of the sideshow staples like walking on broken glass and lying on a bed of nails in her show. Slash wanted to learn how they were done.

"I remember the first show I looked at her and asked, 'Can you teach me how to walk on broken glass?'" Slash remembers of that conversation with Deadgirl. "She said, 'Sure, let's do it now,' and she took some glass and dropped it on the floor and I'm like, 'Oh, we're doing it now?'"

Slash started learning the tricks of the sideshow trade while risking serious injury and real pain, like the time she punctured a vein while learning how to staple things to her chest. She says she worked through it because she wanted to incorporate both performance art forms into one unique variety show.


"People were really shocked when we put out our first flyer because we said our show was hosted by Satan." — Janie Slash

"It was one of the most awful things to rehearse at first until you get used to it to a certain degree," Slash says. "Burlesque is exciting and empowering and fun, but the sideshow is also empowering because you're showing them something they don't necessarily want to see in a way that's interesting and challenging."

Burlesque dancer Velvet Mystique, who's performed in several dance forms such as ballet and belly dancing, joined the Deadly Sins show two years ago. She says it's unlike any show she's done in the local burlesque community, because the audience is part of the experience instead of separate from it.

"The main difference is the amount of freedom we have in our expression with that type of show because unlike stage shows, you can interact with the audience a little more in an appropriate fashion," Mystique says. "The audience is a lot more enthusiastic just because of all the drinks in them and they tend to reach better in the Deadly Sins show as they do in other big stage shows. The big stage shows tend to have this atmosphere of going to the opera where you have to be quiet until the end of the act. I really, really like Deadly Sins because of that."

Janie Slash stands on sideshow performer Della Deadgirl while she lies on a bed of nails.
Nikki Arnold

The dancers and performers mingle their way through the crowd and get to talk and share drinks with the audience as the looming presence of Satan introduces the act from the audience. Slash says they even let audience members perform sideshow stunts by letting them stick cash tips to their bodies with a staple gun.

"We're encouraging people to be themselves with the audience interaction," Slash says. "We try to bring in the audience whenever it's possible. We get them more involved and let them be part of the show. We try to pull them in and make a part of it rather than just stand there and be an audience."

The shows aren't themed so the audience and even the performers don't know what they're getting into until they physically attend the show, Mystique says.

"One dancer could be dedicated to a video game and another will do a classic burlesque theme that you'd see on a big stage show," she says. "It's not a show where you can go, 'Oh, this is what I expect.' You're always amazed and surprised what you see there."
KEEP THE DALLAS OBSERVER FREE... Since we started the Dallas Observer, it has been defined as the free, independent voice of Dallas, and we'd like to keep it that way. With local media under siege, it's more important than ever for us to rally support behind funding our local journalism. You can help by participating in our "I Support" program, allowing us to keep offering readers access to our incisive coverage of local news, food and culture with no paywalls.
Make a one-time donation today for as little as $1.