Director of Film About 2009 Raid of Fort Worth Gay Club: 'It Could Be Ripped From Today's Headlines' 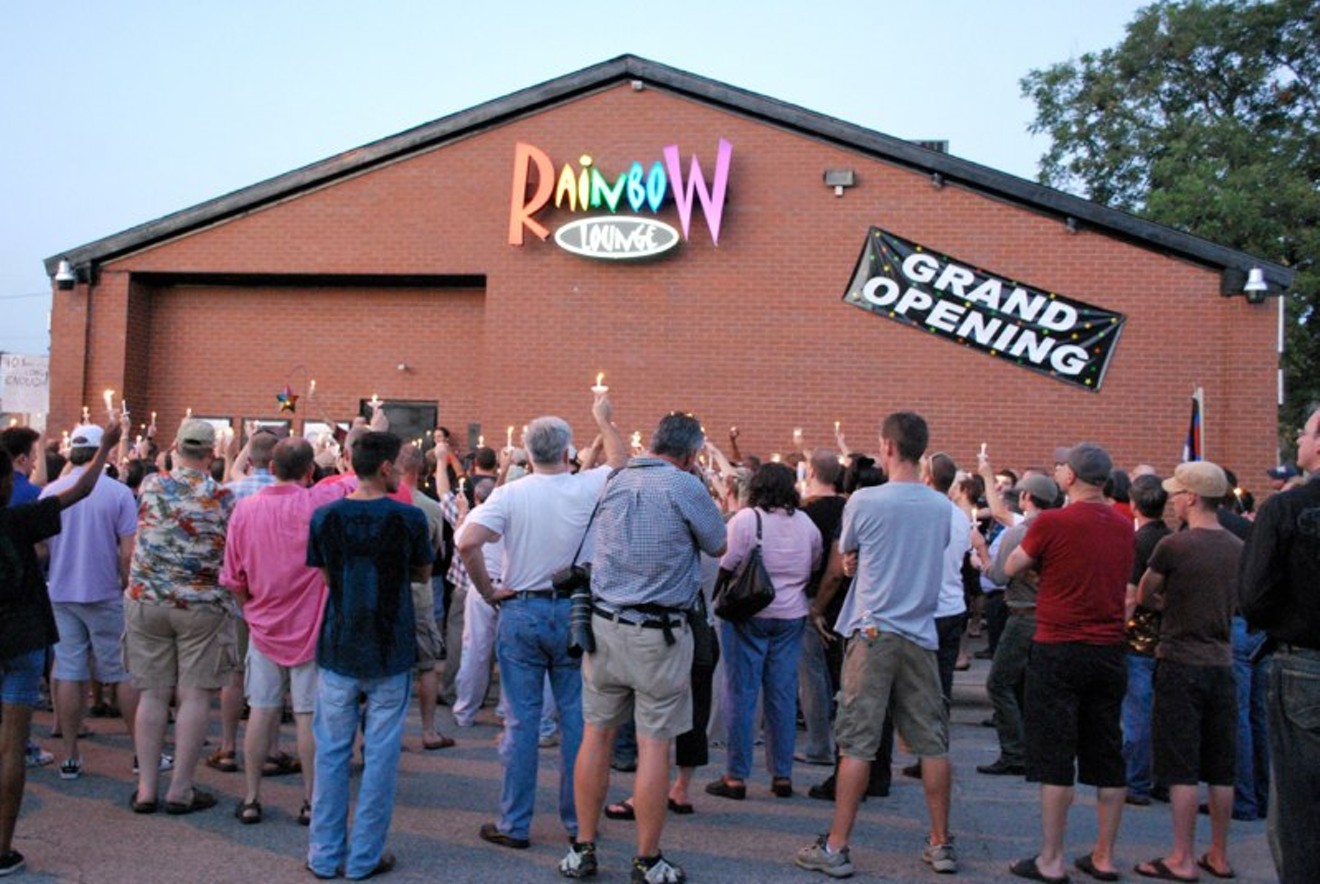 A candlelight vigil took place outside the Rainbow Lounge in 2009 after a destructive raid by the Texas Alcoholic Beverage Commission and Fort Worth Police. Courtesy of Camina Entertainment
Last month, when a fire consumed the Rainbow Lounge in Fort Worth, it meant more than the closure of a beloved dance hotspot. It also marked the final chapter in a story that rocked the city's LGBT community and catalyzed change within the Fort Worth Police Department.

"It was the first day of Gay Pride Month and just shy of eight years after the raid," says Robert Camina says, director of the 2012 documentary Raid of the Rainbow Lounge. "North Texas lost a gay history landmark that day."

In 2009, just two weeks after Rainbow Lounge opened, agents from the Texas Alcoholic Beverage Commission and the Fort Worth Police Department conducted a violent, early-morning raid on the club. Officers attacked several patrons, and one was hospitalized.

The attack, which coincidentally took place on the 40th anniversary of the Stonewall riots, sparked national outrage. Officers claimed their actions were in self defense because the club's patrons were making sexual advances on them.

"I was getting texts and Facebook messages [about the fire] in the middle of the night, and I read them as soon as I woke up," Camina says. Raid of the Rainbow Lounge investigated the raid and chronicled the conversation it sparked between local police and members of the LGBT community.


"The Fort Worth police chief became a huge advocate for the LGBT community. He was at gay pride events and was very approachable with Fairness Fort Worth. He saw [the documentary] three or four times." – director Robert Camina

WaterTower Theatre will host a screening of Raid of the Rainbow Lounge at 7 p.m. Monday, July 10, at the Magnolia Theater in conjunction with its upcoming theater production of Ike Holter's Hit the Wall, which is about the Stonewall riots.

Carmina says the way he learned of the fire reminded him of the raid.

"It was a typical morning for me. I woke up and went to check the news on the computer, which for me was Facebook, and I noticed posts from my friends," he says. "They were friends who I trusted and know wouldn't exaggerate, who had been at the Rainbow Lounge in Fort Worth, which had been open for less than two weeks by then. [The posts said] that agents from TABC and Fort Worth police officers violently raided the bar and started arresting people, dragging them out of the bar and throwing some of them to the floor. One was zip-tied and thrown to the floor and suffered a skull fracture."

Camina says he wasted no time in filming the events that unfolded after the raid — even before he knew he was going to turn the footage into a full-length documentary.

"I was in the eye of the storm," Camina says. "Whenever there was a press conference or a rally, I was there. I wanted to capture these moments as they were occurring. As the movement began, I was already doing interviews with people at the bar because I wanted firsthand recounts and raw interviews untainted by media. I knew that I would interview them later on down the road. After these initial interviews, I wanted to see how they felt and what they wanted to have come out of this raid. Whenever the investigation ended, I wanted to see how they felt about the outcome."

Almost immediately, the officers' accounts of the raid didn't add up, Camina says.

"They claimed it was a standard inspection, but none of the actions that go with standard inspections were performed," he says. "They didn't check licenses. They didn't check IDs of the patrons in there. They just immediately started arresting people for public intoxication inside the bar, and multiple people were arrested. So this raised a lot of questions because it was on the 40th anniversary of Stonewall."

Jeffrey Halstead, the Fort Worth police chief at the time, initially suggested that the patrons provoked the officers into attacking them. This prompted a dialogue between police and political leaders and representatives from Fort Worth's LGBT community that led to the formation of the nonprofit awareness group Fairness Fort Worth.

Halstead later withdrew those assertions about the raid, saying his officers betrayed his trust and mischaracterized the situation. Following an investigation, the Fort Worth Police Department reprimanded three officers, and the TABC fired three of its personnel and reprimanded two.

Camina says Halstead and the city worked to ensure that the dialogue following the raid wasn't just a stream of empty words. Halstead altered the police department's procedures and hired an LGBT liaison officer. The City Council also passed a nondiscrimination ordinance that provided additional protections for transgender citizens. 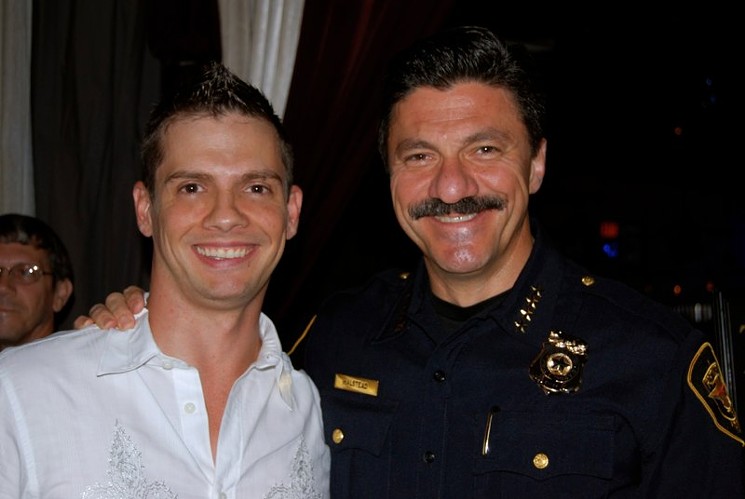 Director Robert Camina (left) says that former Fort Worth Police Chief Jeffrey Halstead became an important ally and supporter of the Fort Worth LGBT community.
Courtesy of Camina Entertainment
Halstead attended several screenings of Camina's film and participated in live Q&A discussions about the steps his police force and the city took after the raid and the lessons learned in its aftermath, Camina says.

"The chief became a huge advocate for the LGBT community," Camina says. "He was at gay pride events and was very approachable with Fairness Fort Worth. He saw [the documentary] three or four times and at the beginning of the film, he's not painted in the greatest light. It shows his character that he's willing to be scrutinized and take questions from the audience, and at the end, he would always get applause."

"I like screening it for LGBT audiences, but when we're screening it at a film festival, I like screening at mainstream festivals because it explains why we're so vocal and it's so ingrained in our history that we've been oppressed and targeted by the police," Camina says. "It's an educational opportunity to explain where we're coming from and that we're not just screaming and yelling for no reason, and I think from a city official or law enforcement official standpoint, it underscores how important it is to be open to conversations with citizens and to be proactive to prevent something like this from happening, because it creates dialogues and it's better to be proactive than reactive."

The raid may have taken place more than eight years ago, but Camina says there are lessons that audiences can still learn from his film and the story of the Rainbow Lounge.

"We're talking about violence in places that are traditionally considered safe spaces," Camina says. "There's been a rise of violence in gay bars, and there's talk about having trust in the police in general and those are themes in Raid of the Rainbow Lounge. Both of those themes can be ripped from today's headlines. Even though it's been eight years since this specific raid, it's still incredibly relevant to today's discussion."