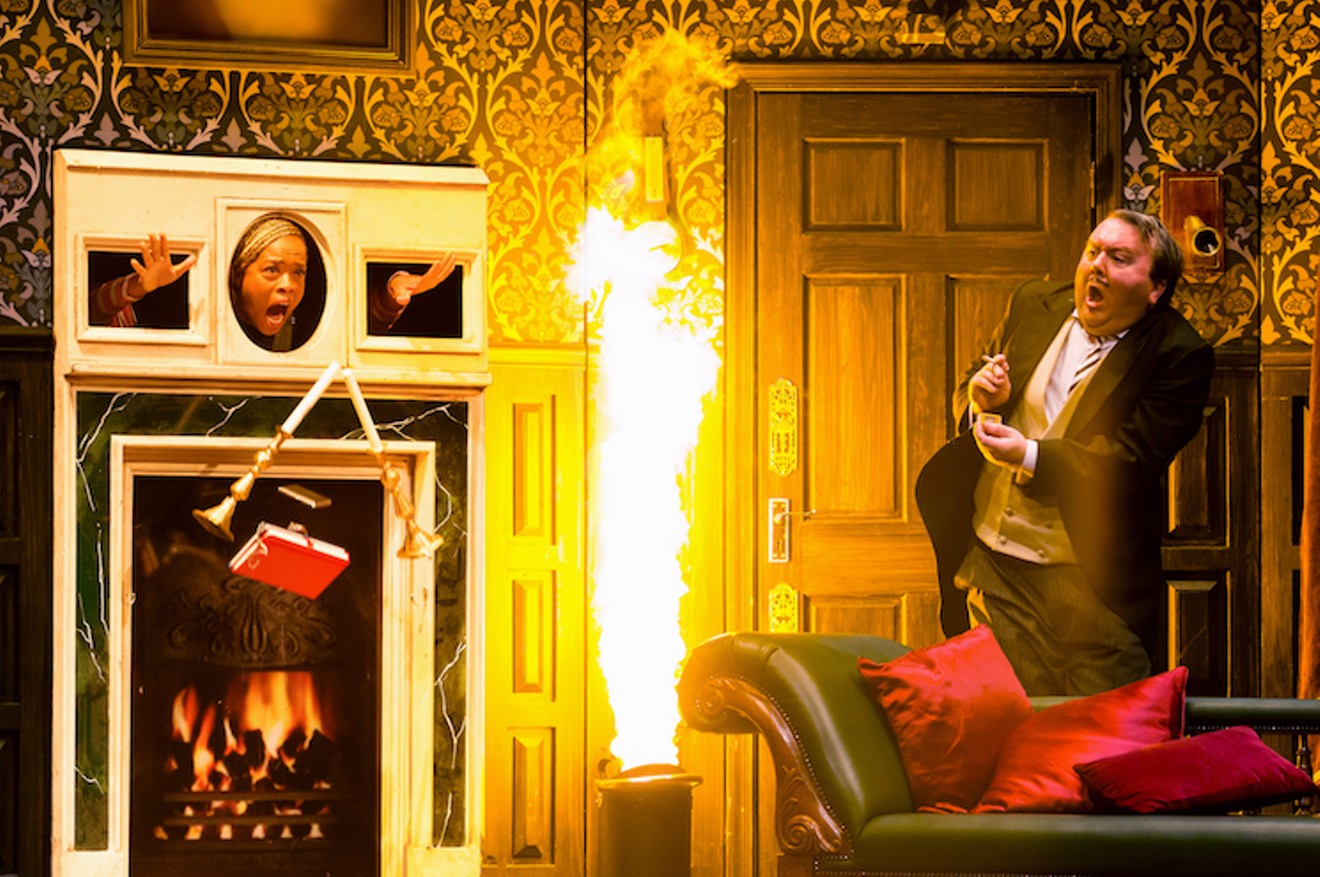 The cast and audience attending the final performance of The Play That Goes Wrong's national tour this month found out when an alarm went off during the middle of the show at the Winspear Opera House.

The Play That Goes Wrong is a fourth-wall-breaking comedy written by Henry Lewis, Jonathan Sayer and Henry Shields that has become a massive hit since its London premiere in 2012. Director J.J. Abrams saw the play during a night off from a hectic shooting schedule for Star Wars: The Force Awakens in London. Abrams loved the play so much that he partnered with Broadway producer Kevin McCollum, who brought hit shows like Rent, Avenue Q and Something Rotten! to the Great White Way, to bring the British comedy to the States.

Cast and crew of the play The Murder at Haversham Manor try to pull an unconscious actress (Jamie Ann Romero) out of the window in The Play That Goes Wrong.
Jeremy Daniel
The American production premiered in 2017 and extended its Broadway run and announced its first American tour more than a year later, according to Playbill.

The Play That Goes Wrong stages a fictional production of a poorly constructed murder mystery called The Murder at Haversham Manor that falls apart on every conceivable level right before an audience's eyes. The cast members forget their lines, misplace key props and break parts of the set. Crew members have to fill in for unconscious cast members and accidentally play the wrong music and sound effects. The performance creates the illusion of a real play by starting well before the first curtain rises as cast members wander the theater and lobby in character and work on the set while the audience is taking their seats.

The Winspear Opera House's alarm system brought a new level of real, fourth-wall-breaking comedy to the show. Cindy Evans, the director of publicity for the AT&T Performing Arts Center, says that a water break in the building's kitchen triggered the alarm during the 7:30 p.m. performance on June 16.

"The house lights came up and there were flashing emergency lights that we could see from the seats," says Brad Justice of Weatherford, who attended the performance. "There was a prerecorded message that said something to the effect of 'Please leave the facility, don't use the elevators' and things like that."

The alarm sounded during the second act of the production and at first, some members of the audience for the first time weren't sure if it was another bit or an actual alarm, says attendee Gary Payne of Fort Worth.


An employee of the theater announced that the alarm was real and asked the cast to clear the stage.

"I got about halfway through Act Two and the alarm started going off again and everybody started looking at each other like, 'Should we leave?'" Payne says. "Even the ushers stood up near the doors, but they didn't open the doors."

An employee of the theater got on the "God mic," a theatrical term for the theater's intercom system, and announced that the alarm was real and asked the cast to clear the stage. Justice says it still felt like part of the show.

"They closed the curtain and just because of the nature of that show, everyone thought it was part of the show," Justice says. "Everyone was laughing and clapping."

Justice says that he started wondering after a few minutes if the stage evacuation wasn't an extended joke.

"Several minutes had passed and I personally started second guessing myself," Justice says. "I thought, 'This is taking awhile. Maybe this isn't part of the show.'"

The audience didn't need to be evacuated, and the cast continued the show right where they left off, Payne says.

"It was great," Payne says. "Everybody loved it, but it was weird. It was a very strange experience."

Justice says the play's comedic nature and the cast's stellar performance still made him second-guess the moment even after he left the theater.

"I wasn't totally sure still once we left so I messaged it to the AT&T Performing Arts Center's Facebook page to ask, 'Hey, can you confirm if that was part of the show?'" Justice says. "They got back to me and said it wasn't part of the show."
KEEP THE DALLAS OBSERVER FREE... Since we started the Dallas Observer, it has been defined as the free, independent voice of Dallas, and we'd like to keep it that way. With local media under siege, it's more important than ever for us to rally support behind funding our local journalism. You can help by participating in our "I Support" program, allowing us to keep offering readers access to our incisive coverage of local news, food and culture with no paywalls.
Make a one-time donation today for as little as $1.