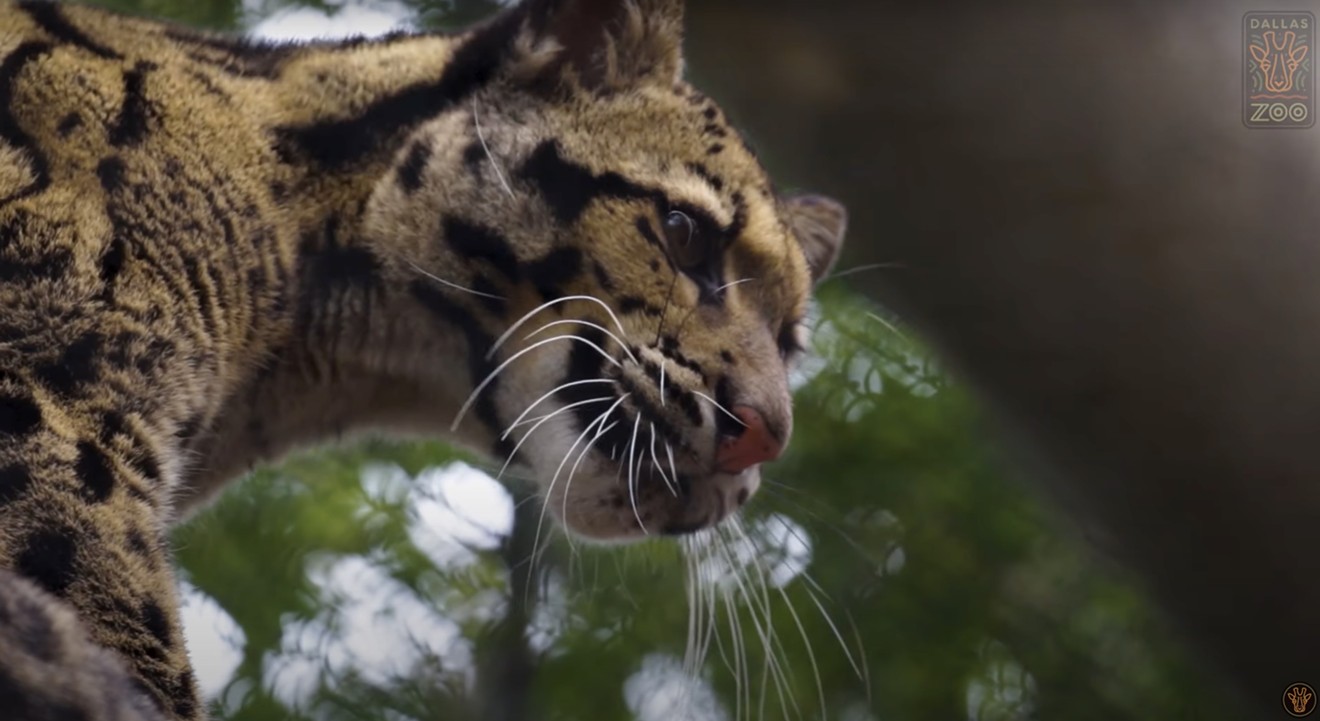 Last year, the Dallas Zoo posted a video of the two clouded leopards it received from the Houston Zoo in 2021. On Friday, one of them went missing. Dallas Zoo, screenshot
What would life be like without Twitter?

Well, for one thing, Elon Musk would have one less way to ruin the world just because someone was mean to him online. Things like context, depth and meaning would have ... well, meaning again. Donald Trump would've had to settle for being an ex-game show host who somehow found a way to make the casino business model — in which people give a business money for the privilege of getting robbed of their money — unprofitable.

Let's put all that aside and just focus on the funny side of Twitter.

We really needed some good jokes after what went down on Friday. The Dallas Zoo had to close Friday morning when a clouded leopard named Nova took her name too literally by fading out of sight. Staff members did their daily rounds and found that Nova wasn't in her enclosure. Dallas Police responded to the missing leopard call and found that someone had cut a hole in the meshed walls of Nova's enclosure.

Fortunately, the leopard didn't roam very far. The Dallas Zoo announced around 5:30 p.m. that Nova had been found safe and sound near her habitat enclosure and brought back home.

The news of the escape was alarming at first, but Harrison Edell, vice president for animal care at the Dallas Zoo, said that clouded leopards are smaller and don't pose a threat to people. However, that doesn't mean you should don a raw meat suit and go for a long, brisk walk in the hopes that you'll get to take a selfie with Nova.

The internet and cats of all breeds go together as well as Trump and bankruptcy. So it's no wonder that so many people pounced on the chance to share their own suggestions and comments about the slightly alarming alert. Here are some of the best responses.

@PhotoCassidy, who was one of the first to respond to the news, set the bar high for Twitter's meme makers with this catty comment (ugh puns, this isn't how my life plan was supposed to work).


Have you tried putting out an empty paper bag or cardboard box? pic.twitter.com/fUCzPa3VK0

Here's another reason to be grateful for Twitter. We've got drive-in movie critic Joe Bob Briggs @therealjoebob to keep us entertained in our darkest times.


Our friends at @TexasTheatre are five minutes away from the Dallas Zoo, which just reported an escaped leopard. This could be bad for box office tonight.

The pub trivia account for TrivWorks had an interesting outsider view of the situation.

@mrsmcglover rolled out an obvious solution to lure the cat back to the zoo even though we now know it didn't get very far.

Dallas Zoo, have you tried setting up a nice shelf with very precious breakable family mementos that you think is on too high for the cat to reach bc he will come back to prove you wrong https://t.co/3TyhcmKNip

Here's another punny one from @corykellerson. If it didn't have a second non-pun angle, we wouldn't have included it.

Finally, this one came from the certified page of the Jurassic World film series. You know someone done fucked up when a park that repeatedly ignores Jeff Goldblum's warnings about enclosing dinosaurs calls you on your shit.