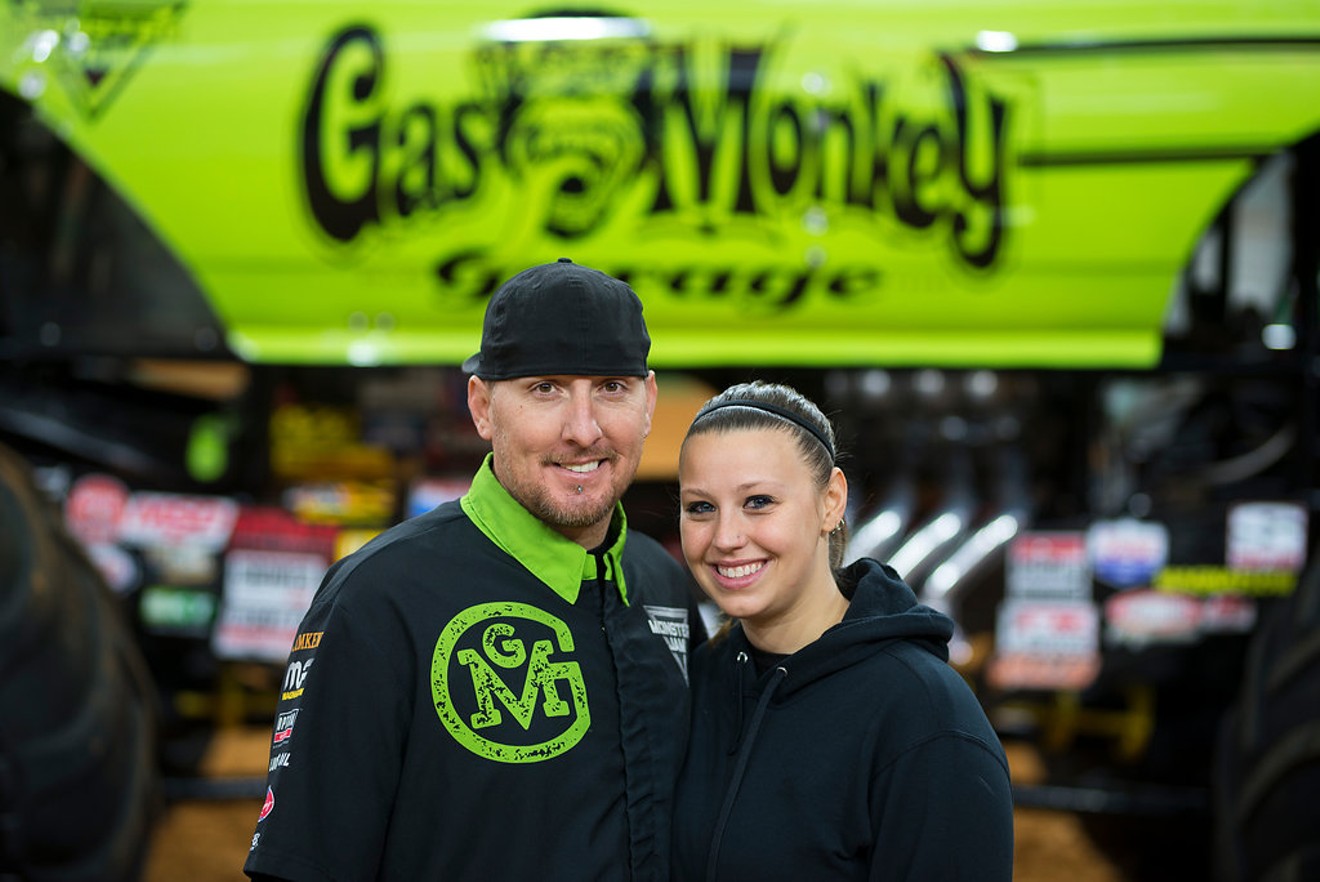 If you tried convincing your significant other to go with you to the Monster Jam monster truck event at AT&T Stadium on Saturday by calling it a "romantic date night," you were probably met with laughter. The word romance usually conjures images of a candlelit dinner, not a stadium filled with 12,000-pound trucks powered by V8 engines, and screaming fans. However, for one couple on the Monster Jam tour it's a dream come true.

The Gas Monkey Garage truck is sponsored by Richard Rawlings' Dallas hot rod shop — made world famous by the Discovery Channel series Fast N' Loud — and runs under the care of soon-to-be married couple B.J. Johnson and Lindsey Hilgendorf. Johnson is the driver and Hilgendorf is the crew chief, one of only three women in the Monster Jam league with that title.

The couple met while working in the professional monster truck racing and stunt league, where they drove and worked on different vehicles, and joined forces in January 2016 when Rawlings decided to enter his truck into Monster Jam and picked them to lead his team.

The hood of the Gas Monkey Garage Monster Jam truck
Brian Maschino
Both had been working on monster trucks since they were young. Johnson had wanted to drive a truck since the first time his dad took him to a monster truck show.

"It's a dream come true that started when I was a little kid," Johnson says. "I always wanted to drive a truck. I actually told my dad when I went to a show that I wanted to drive one and he said, 'Sure, keep dreaming.' So now I give him a bad time because I'm racing in nine different countries all over the world."

Hilgendorf started tinkering with monster trucks when she was still in high school, before going off to college to earn a business degree. She tried working a more normal job but went back to the monster truck world "when I realized I didn't want to work in an office anymore."

Today, she has her own trailer and runs a two-truck team. Hilgendorf says her job gives her lots to do but at least it doesn't involve staying behind a desk the whole time.

"Nothing's typical ever," she says. "It depends on what the damage is from the previous week. We have all week long to fix everything and anything to make sure the truck's 100 percent before the show. So sometimes you're changing shocks or doing a motor swap or just doing routine maintenance just to make sure you don't have any damage before the show."

The Gas Monkey Garage truck
Brian Maschino
Driving such a mammoth machine may look easy from the sidelines but Johnson says there's a lot going on underneath his roll cage that he's spent a lifetime preparing to manage.

"Everybody thinks it's really easy to drive these things and when I started, I didn't have any training," he says. "Basically, I got thrown into a truck and was told, 'You'll figure it out.'"

Monster truck driving requires an interesting mix of automotive preparation, quick reflexes and physical strength for everyone involved from the driver to the crew member who repaints the hood after every race. This year, the league awards to each truck team through a series of timed and freestyle stunt events that will take them to the World Finals this March in Las Vegas, Nevada.

"This is not staged," Johnson says. "This is true racing. When it comes down to the freestyle and wheelies, the fans are judging us."

B.J. Johnson reattaches a front-facing floor panel, which allows him the ability to see through to the ground when navigating the truck.
Brian Maschino
Johnson also depends on his crew to make sure his truck is in racing condition before every show and his crew chief to tell him where he's going. Johnson has to wear seven sets of seatbelts in his custom framed driver's seat that him from moving his head while the car is in motion, whether he's rolling over a string of used Ford Crown Victorias or flying through the air while fighting G-forces that can wreck his body.

"I'm his eyes and ears," Hilgendorf says. "When he's strapped in, he can't move his head from side to side. All he can see is what's in front of him so you don't get to see the jumps and what's going on the outside."

Hilgendorf says Johnson wouldn't know where he's going without her voice in his ear telling him which way to go and how to score the highest jumps from her view in the stands.

"When they come in to do the show, they do their intros and then they all nose into their spots, so he has no idea what the race lanes are doing," Hilgendorf says. "So while I'm up in the stands, I can tell him, 'You're jumping off to the right' or, 'You're nose diving.' So it's a good working relationship between the two of us."

Johnson says driving a Monster Jam show feels like "a two-hour car crash." He loves it, but it can also leave him sore — sometimes for days on end.

Lindsey Hilgendorf is one of three female crew chiefs in the Monster Jam league.
Brian Maschino
"Everybody gets sore and banged up and sometimes you're not really injured or it's not a bad injury but you've got to sit out because of the G-forces on your body when you land," he says. "So you're walking a little stiff all week long."

However, he says his aches and pains still don't compare to what the crew endures as they prep his ride for each show.

"They're the ones who are behind the scenes that bust their butt every week to make sure the trucks are ready," he says. "I have the easy jobs. I drive the truck and I'm sore for a week. Those guys are sore all week long because they're the heart and soul of Monster Jam."

Hilgendorf says having your future spouse as your driver also makes the experience of running a competitive monster truck team even more thrilling.

"It's so much more fulfilling," she says. "It's just exciting when he does so good because first of all, your truck's performing well so you've done your job, and once he goes on the floor, it's up to him, but it's exciting to work together because he'll ask for my opinion and he actually wants my opinion whereas not all drivers do."