Courtney Jacobs
Kimzey’s Coffee opens in Argyle this week. The building’s architecture was heavily inspired by Hugh Comstock’s fairy tale cottages by the sea.
The new building near the corner of FM 407 and U.S. 377 in Argyle looks as if it could have been built by elves. The round window and unusually crooked roof bring to mind fairy tales of princesses in hiding, adventure-shy hobbits and Santa’s workshop during the off-season. Kimzey’s Coffee, the newest addition to this rapidly developing intersection, has been painstakingly constructed to resemble a childhood fantasy, but it’s purpose-built to provide adults what they want most in their real lives: quality coffee and delectable pastries in an inviting atmosphere.

They had so many visitors during their first week of unofficial openings, the demand for food hit capacity almost every day. Fisher is excited about the initial popularity, though he admits the crowd differs somewhat from Denton’s. They had a massive influx of local high school students during the first week, but he also noted a good population of college students, professors, parents with small children and retirees from the nearby Robson Ranch community. 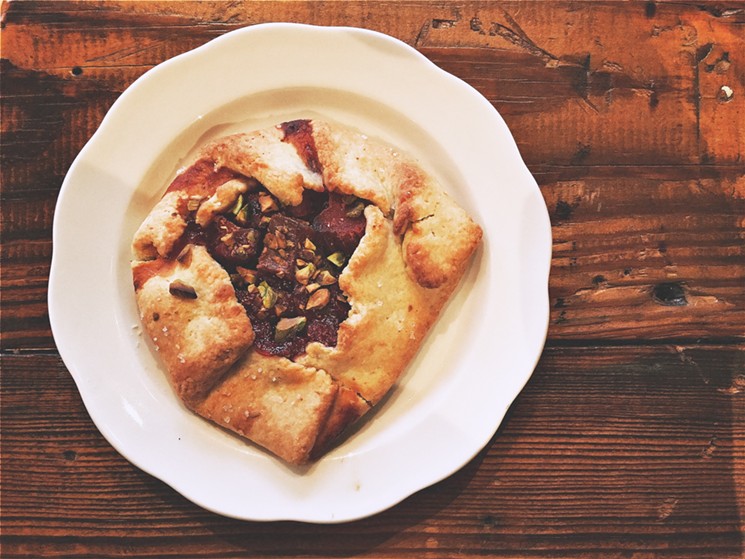 The strawberry rhubarb pistachio galette, served slightly warm, is a hearty treat of rustic spring flavors.
Courtney Jacobs
Fisher considers that a win; it was never his intention to duplicate West Oak, citing the desire to “dial in the pulse of the community” during development. The diversity in clientele and the outpouring of support during the first week are hints that they've hit the mark, Fisher says.

Like its sibling businesses, Kimzey’s tells a story. Next door, Earl’s 377 was developed around the idea of a husband and wife with both Tuscan and Texas roots channeling their passion for travel into their food. Kimzey’s is inspired by the whimsy and imagination of fairy tale cottages. Developers envisioned the building itself as a fairy tale author’s home, a cozy nook where he and his 10-year-old daughter pen storybook adventures by the fireside over hot cocoa. The atmosphere is warm and inviting; sturdy mission-style furniture and iron wall sconces decorate the half-timbered interior for a look that’s more alpine ski chalet than hipster coffee house.

The building itself is meticulously crafted to resemble a Comstock home, a series of whimsical cottages designed and built by Hugh Comstock during the 1920s in a small seaside California town. Inspired by Arthur Rackham’s illustrated children’s books, Comstock’s creations are brick and mortar versions of storybook fantasies. During construction, Comstock purposefully didn’t use a level, so the roofing undulates and the stonework looks as if it were installed with care rather than precision. 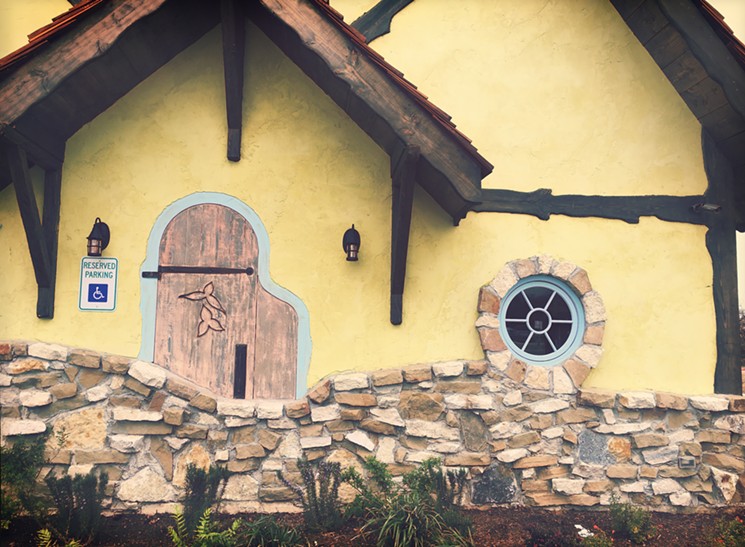 From the hand-hewn roof to the exposed beam ceiling, each of the elements incorporates or pays homage to the craftsmanship and handiwork at the heart of the current maker movement renaissance. “Everything you see, every detail is intentional,” Fisher says.

The commitment to the aesthetic comes through in the details; the eponymous mugs are handcrafted by Deneen Pottery, a second-generation family business specializing in hand-thrown stoneware. The building features not one but two fully functioning fireplaces, both installed by a third-generation chimney builder and his son. With our mild Texas non-winter, we’re not likely to see either one fired up any time soon, but Fisher promises they’re impressive in action. The larger of the two is a 5-by-6-foot firebox that burns 3-foot-long wood logs, producing an intense amount of heat.

Kimzey’s offers standard coffee and tea options; they’re stocking and serving West Oak coffee as well as an assortment of teas and hot cocoa for kids. They’ll also carry a selection of freshly baked, scratch-made baked goods from the commissary kitchen at West Oak, where head chef Amanda Potter is cranking out some seriously delicious pastries. Rather than the traditional pie-slice presentation, her single-serving quiches are towering, individually crusted cups of flaky pastry filled with airy, springy egg. The asparagus in the seasonal veggie quiche was the perfect consistency and didn’t overpower the delicate egg and cheese filling. The tops are broiled slightly before serving, so they’re darker than some would expect, adding a welcome depth of flavor and texture not often encountered in coffee shop quiche. The strawberry-rhubarb pistachio galette delivered a rich, jammy filling of springtime flavors enveloped in a cradle of spot-on flaky crust. Head chef Amanda Potter’s vegetable cheese quiche is a single, satisfying serving of flaky pastry and delicate fillings for $5.
Courtney Jacobs
As at West Oak, menu options at Kimzey’s will change seasonally, and Fisher says he’s working on sourcing more of their ingredients locally. He also has plans to host or support a number of community-oriented events; a weekly children’s story hour is already in the works, and he’s talking to local cycling advocates about a possible group ride between all three shops in the fall.

Kimzey’s is the second coffee shop to open in town, so Argyle residents now have twice the options for their morning jolt. Kimzey’s might just have the edge, though. In addition to the fairy tale-like ambiance, they also offer the one important coffee amenity that can make all the difference in life: a drive-thru.