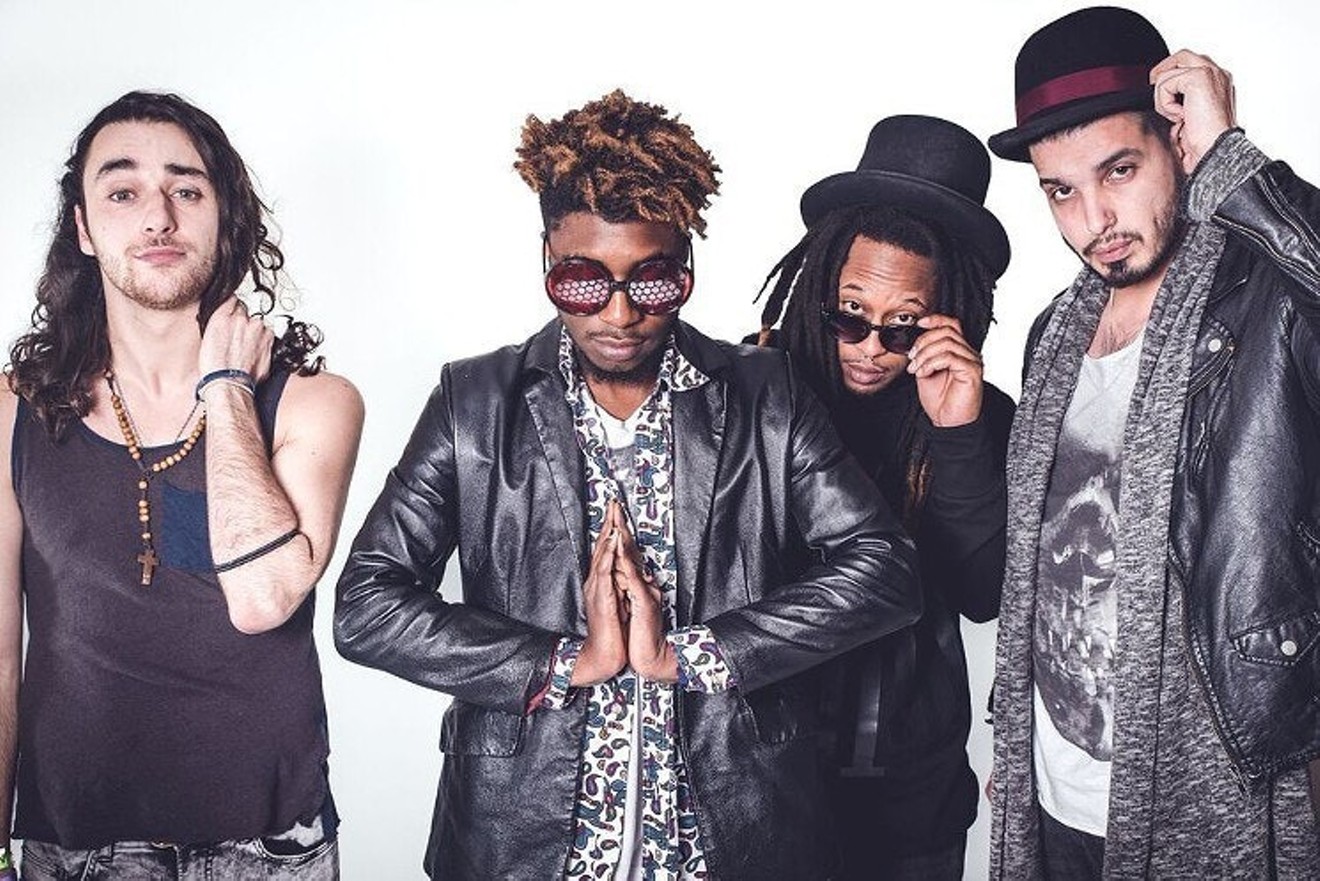 Hip-hop soul group Cure for Paranoia plays Fort Worth's Tilt Vision Art Gallery this Saturday. Gavin Lueking
Every week we do our best to spread our best concert roundup across the week a bit, but this week has an absolutely loaded Saturday night. Felt & Fur opens the week with an intimate show at The Wild Detectives, and things get rolling Friday night with Speedealer at Three Links. Saturday night, though, you're going to have some tough decisions to make. There's a country festival in Irving, a dark folk show in Denton, a hip-hop date night in Fort Worth, rock in Dallas and death metal in Haltom City. Surely this list will help you sort things out for Saturday. Time to make your choices.
Felt & Fur
7 p.m., Thursday, June 24, at The Wild Detectives, 314 W. Eighth St., $10 at eventbrite.com

As part of the Six Foot Love concert series that began early on during the pandemic, The Wild Detectives in Oak Cliff will host an evening with the Denton synth-pop trio Felt & Fur on Thursday. Known for finding the middle ground between darkness and danceability, Felt & Fur combines pleading vocals and dramatic guitar sounds with pounding drums and a pulsing synth to create their unique sound. The show is outdoors and tickets are limited.
Speedealer
8 p.m., Friday, June 25, at Three Links, 2704 Elm St., $15 at seetickets.us

Once known as REO Speedealer before receiving a cease-and-desist order from the classic rock band with a similar name, Speedealer was the toast of the Dallas metal and hardcore scene throughout the '90s, landing tours with Zeke, Fu Manchu, Neurosis and Gwar. The band faded from the public eye in the early 2000s but came roaring back in 2019 with a new album, Blue Days, Black Nights. Texas hardcore bands Reagan Era Rejects and Cashing In support the band this Friday night at Three Links.
Robert Earl Keen
5:30 p.m., Saturday, June 26, at The Pavilion at Toyota Music Factory, 300 W. Las Colinas Blvd., $29+ at livenation.com

This year, the Texas Summer Jam returns for its third installment at The Pavilion at Toyota Music Factory after skipping last year for obvious reasons. Texas music superstar Robert Earl Keen closes out the evening with support from Hayes Carll, Kat Hasty, Tristan Marez and more. Keen made headlines earlier this year when it was revealed that the singer refinanced his home to make sure that his band received payment and health insurance throughout the pandemic. The man is not just a music legend; he's a hero.
Prophecy
6 p.m., Saturday, June 26, at Haltom Theater, 5601 Belknap St., $10 at the door

What began as a streaming-only duo performance between Jim “Reverend Horton” Heath and Jimbo Wallace of The Reverend Horton Heat has transformed into a live and touring iteration with the addition of Slim Jim Phantom, the drummer of Stray Cats. Their show this Saturday night at Trees will be the band's first live performance at a venue in front of actual people. Jimmy Dale Richardson, Lance Lipinsky and Justin Pickard and the Thunderbird Winos open.
Lizzie Boredom
7:30 p.m., Saturday, June 26, at Ruins, 2653 Commerce St., $10 at the door

After waiting an appropriate amount of time for everyone who qualifies to get the vaccine, Barf Wave Records will be hosting a Vaccination Celebration event Saturday night at Ruins in Deep Ellum. Charlie DeBolt of Springtime and The Changes opens with a solo set with additional performances by Mean Motor Scooter and Lizzie Boredom, an all-woman punk rock trio that packs as much power and pissed-off lyrics into their songs as any riot grrrl band from Bikini Kill to Pussy Riot.
Pinebox Serenade
8 p.m., Saturday, June 26, at Rubber Gloves Rehearsal Studios, 411 E. Sycamore St., $5 at the door

Pinebox Serenade has had quite the comeback story. Guitarist Chris Welch suffered a stroke in December 2019 and spent about a year relearning how to play the guitar and how to sing. Earlier this year, the dark folk band released their first new material since 2016's All Is Not Lost, a four-song EP taking inspiration from the dark side of Texas history. Fiddle player Holly Manning will be doing double duty both playing with Pinebox Serenade and leading Holly and The Mystery Lights this Saturday night at Rubber Gloves Rehearsal Studios in Denton. Experimental artist Sarah Ruth is set to open the show.
Cure for Paranoia
8 p.m., Saturday, June 26, at Tilt Vision Art Gallery, 320 E. Broadway Ave., $35-$100 at halebaskin.com

Looking for something a little off the beaten path for your Saturday night concert experience? Something more in line with a date night perhaps? Look no further than the Candlelight Concert taking place at the Tilt Vision Art Gallery in Fort Worth. Tickets for this catered concert come with a bottle of wine and an ambiance created by 550 flameless candles. The third installment in this concert series is themed "East vs. West," with hip-hop and R&B group Cure for Paranoia representing Dallas and blues artist Michael Lee representing Fort Worth.
Smokey Mirror
9 p.m., Saturday, June 26, at Armoury D.E., 2714 Elm St., Free


Dallas psychedelic blues metal band Smokey Mirror made their first reappearance in April 2021 opening for Holy Death Trio. This week they make their triumphant return to Armoury D.E. for what they are describing as a "3 HR LIVE FREAKOUT!!!"  Also playing this long, strange trip Saturday night is Denton's improvised space-gaze trio Maestro Maya. The show is free, and the music is certain to be groovy. So, there's no reason to miss out on live music this weekend.
Fitz and The Tantrums
7 p.m., Tuesday, June 29, at House of Blues Dallas, 2200 N. Lamar St., $32.50 at livenation.com

Los Angeles indie-pop/neo-soul band Fitz and The Tantrums play Dallas's House of Blues Tuesday night. Fitz and The Tantrums' last album All the Feels was released in 2019, while singer Michael Fitzpatrick released his solo project Head Up High earlier this year. That project came together over the course of four months as a way for the singer to cope with the pandemic lockdowns. Denton-born alt-pop star Livingston will be providing opening support.
KEEP THE DALLAS OBSERVER FREE... Since we started the Dallas Observer, it has been defined as the free, independent voice of Dallas, and we'd like to keep it that way. With local media under siege, it's more important than ever for us to rally support behind funding our local journalism. You can help by participating in our "I Support" program, allowing us to keep offering readers access to our incisive coverage of local news, food and culture with no paywalls.
Make a one-time donation today for as little as $1.