Dexter Holland of The Offspring Is Still Pretty Fly 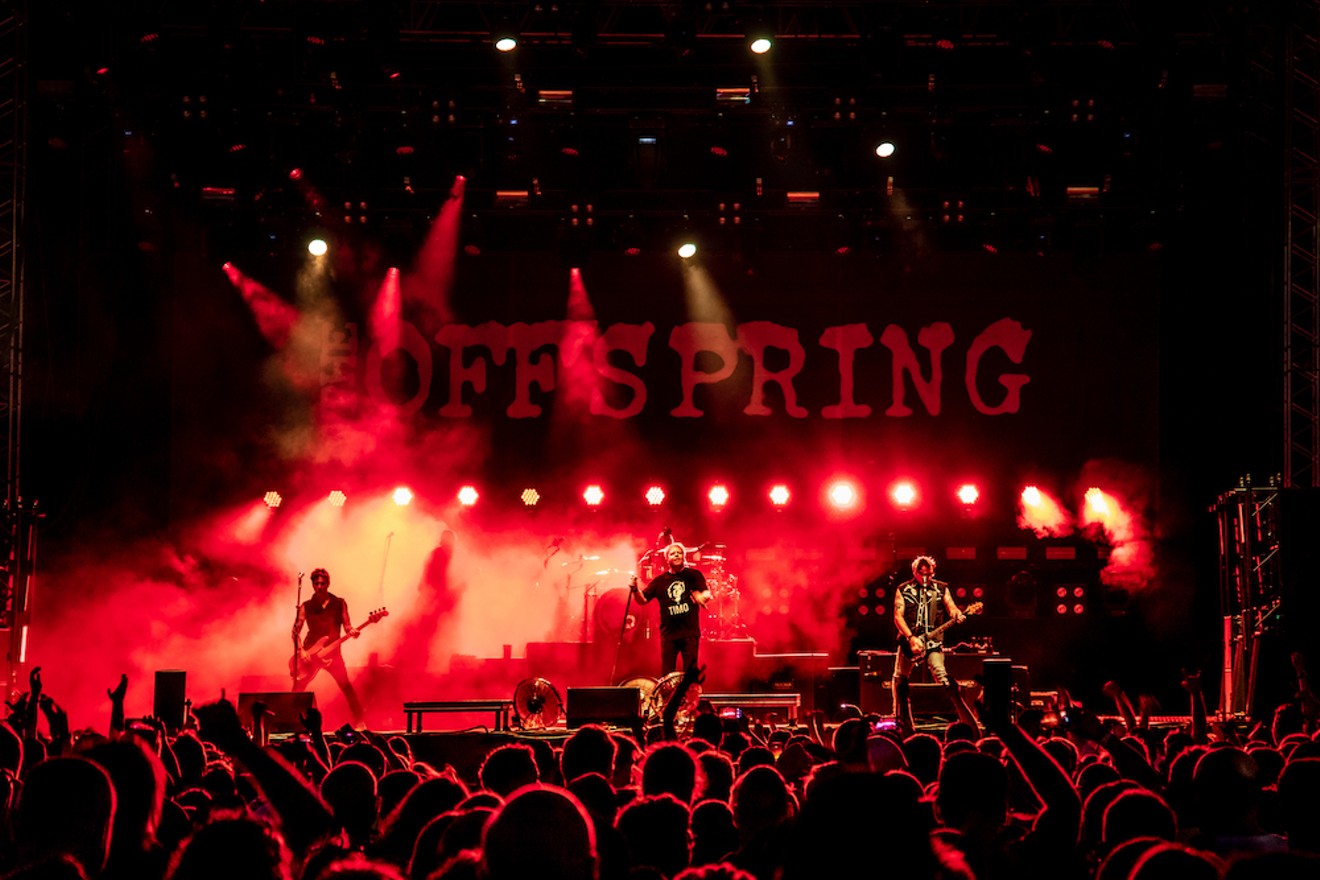 The Offspring brings its Let the Bad Times Roll tour to South Side Ballroom on Tuesday. Courtesy of The Offspring
With 10 studio albums, including the best-selling album ever released on an independent label, more than 30 years of touring and plenty of hits along the way, The Offspring remain relevant today. They just kicked off their 18-city U.S. tour in support of their latest record, Let The Bad Times Roll. Ahead of their stop in Dallas at the South Side Ball on Tuesday, May 3, singer and guitarist Bryan “Dexter” Holland spoke to the Observer about their latest record, touring and some of his personal accomplishments. The front man for The Offspring also has a pilot’s license, a doctorate in molecular biology and is an entrepreneur, starting both a record label and hot sauce company. (The following has been edited for clarity and length.)

Just over a year ago, you released your first record in nine years, Let the Bad Times Roll. What was it like releasing a new record during a pandemic with so much uncertainty on touring?

It seems like a strange thing to release a record right in the middle of a pandemic when you can’t tour. It had been so long since we had done a record, and we didn’t want to wait anymore. We thought, this is what we do as a band, so let’s go ahead and put it out anyway. It wasn’t supposed to be that long. You just get busy with touring, and what else goes on and writing songs. We go into the studio when we can; we don’t really block off like, OK, in six months we’re going to write a record. The songs have to come when they come, so it took a little longer. I went back to school for a while, there were a bunch of things, so we did not intend for it to take that long, but it just did. That was the time when the record was finished and we thought, well, what the hell, let’s get it out!

What are you most excited about being able to go on the road and tour again?

There’s such a feeling that people are ready to get out in the world again, and when you see a concert, it’s just a microcosm of that. They’re so happy to be out doing regular things again, so it makes touring especially fun.

Do you have a favorite song to play live?

I really do love all of our songs in different ways. When we play the songs live, there’s this immediate reaction you don’t necessarily get in the studio. You feel like oh, this song really feels good, and I really like it, but it’s always fun to go out there and see how the crowd reacts. One of my favorites has always been “The Kids Aren’t Alright” because of the way the audience really responds to it.

What about the new record, is there a song you’ve really liked playing live from that record?

We just started playing our new single called, “Behind Your Walls.” That song was something we created during the pandemic, and it was kind of more from this feeling that people are stuck in their homes, and I was noticing that some people were getting a little stir-crazy, right? It touches on that feeling of you’re trying to reach someone who’s kind of gone over the edge and you’re trying to sort of pull them back. People are talking a lot more about mental illness, which is a good thing that people are more open about it, but it’s kind of scary that this is going on. This is an after effect, I think, of the pandemic as well, that people are still kind of finding themselves or trying to find their stable ground mentally. 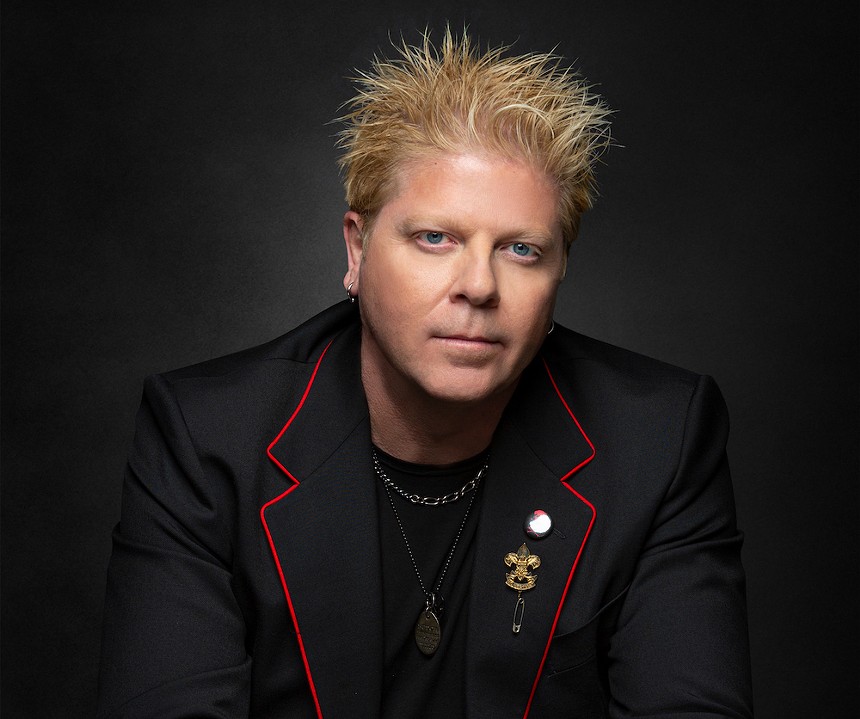 We’ve talked about the Americana thing. It’s kind of funny because these anniversaries become sort of, I don’t want to say arbitrary, but you can pick whatever you want. I saw U2’s Joshua Tree thing, and I think it was 30- or 35-year, so OK, 35, as good a reason as any. I guess we haven’t really thought too much about the Americana thing. Smash was definitely the record that got us known and out there; Americana is obviously something that people seem to really gravitate towards, as far as our records go. Maybe this is a reminder that we should do something for that.

You graduated as high school valedictorian, spawning the nickname Dexter. With the success of Smash in the '90s, you had to choose between college or focusing on The Offspring. You chose the band, but eventually went back to finish school and get a doctoral degree. What made you decide to pursue this when you already had a successful career with the band?

The band was something that we loved. I think we maybe just couldn’t quite admit that we wanted to go for it because it just seemed so unlikely (to make a career out of it). Especially, being in a punk rock band. The biggest punk band back then would have probably been Bad Religion, and we were so stoked to be on their label (Epitaph Records, an independent record label owned by Bad Religion guitarist Brett Gurewitz).

That seemed like that was going to be the ceiling – this was before Nirvana even (gained commercial success). When Nirvana came out, that really changed everything. It was kind of like, this is a fun hobby, and I can’t help but take it as far as I can take the band, but really, we’ve got to have something on the side, because this is probably not going to pan out to be our career. We all had jobs and school and stuff. I was a graduate student in molecular biology, and people would say, "What’s that?" and I would tell people it’s kind of like biotech. Obviously, people are learning a lot more about molecular biology now with COVID.

I kept both of them (school and the band) going at the same time. All of the sudden, in 1994, the band got played on the radio, then MTV, and it was really just off to the races. I remember having a conversation with my manager like, "Could I finish the Ph.D for a couple years and then do this?" and he was like, "No, you’ve got to go out and tour or it’s not going to happen." I put the school stuff to the side for a while.

University of Southern California (USC), my school, was really nice to give me a leave of absence. I stayed in touch with them and eventually, years later, I thought it was a shame that I hadn’t finished the degree because I already had the master’s and was working on the doctorate, which is a really long process. It took me about five years to finish the dissertation because it was hard to find time, dedicating a couple days a week towards it. It was just one of those things that I wanted to finish, and I felt like it was important that I had come this far. Not to sound corny, but when you do research, it’s supposed to be to make a contribution, – and I really wanted to finish that goal that I had started, to contribute something to the field of medical research.

You have a pilot’s license and last year you did a “cockpit karaoke” session, playing “Come Out And Play” from the cockpit of your jet with lead Offspring guitarist, Kevin “Noodles” Wasserman and Jason “Blackball” McLean, the “gotta keep 'em separated” guy. Who came up with that idea?

I guess it was me. I love to fly. We’ve always kept all the other activities off to the side; I don’t talk about it a lot (being a pilot). For this record, we thought let’s branch out a bit and show the band more and what some of our outside interests are. Of course, flying is mine. I thought, there’s this thing called carpool karaoke (recurring segment on The Late Late Show with James Corden singing with celebrities in a car), so let’s try something called cockpit karaoke.

We kind of thought that James Corden might go for it, but he didn’t. I said, "Come on, we’ll get him on the plane, we’ll do our thing,” and they (management) were like,"You have to understand, there’s no way in hell CBS, with their lawyers and their liability, is going to let James Corden get in a plane with a fuckin’ punk rock singer guy and do this." We thought, well, we’ll just record one anyway and if he likes it, he likes it, and if not, it’s also just kind of funny and fun to put it out. We had such a blast doing it, it was so great and so much fun, and it really got a lot more attention than I thought it would.

Between starting a record label (Nitro Records) and a hot sauce company (Gringo Bandito), it seems like you’re always up to something new. Since you haven’t been able to tour as much the last two years, what did you do to keep yourself busy? Are there any bucket list items you were able to achieve with the extra time at home?

Triathlon, that was the latest thing. I ran a couple of marathons; I like distance running and endurance sports, and I thought it would be cool to try something like that. I did a couple of those (triathlons) and I’m going to keep that up, I hope.

Anything else you want to let the concertgoers or fans know prior to the shows?

It’s so great to be back out there, and our new album, Let the Bad Times Roll, is something that we are
really excited about. We still want to talk about it even though it’s been out for a while, and I hope
everyone gets a chance to check it out and we can’t wait to see them on tour.