In a Barbecue Bind? Costco Might Be Your Savior. 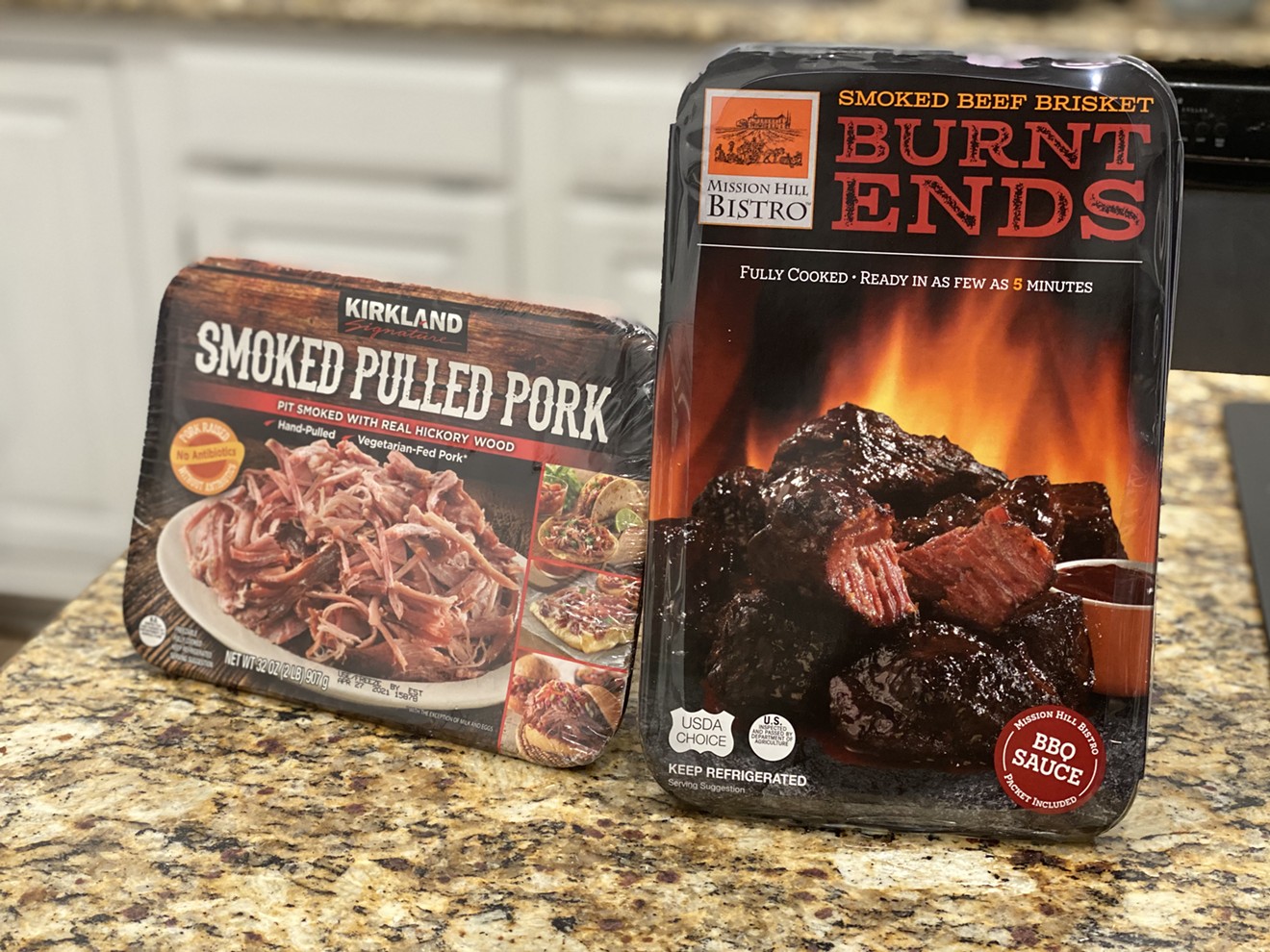 We can add barbecue to the wide variety of food and merchandise you can buy at your local Costco. Chris Wolfgang
There's no denying the appeal of Costco. The warehouse store has legions of loyal customers who gladly hand over $60 a year (or more) for access to the retailer's wide variety of merchandise. We get it. Where else can you buy a month's worth of toilet paper, tires for your car and an 82-inch television all in one stop? Costco also deserves high marks for paying their employees well, and Business Insider recently noted that the company quietly bumped up the hourly pay for warehouse staff during the pandemic.

One of the great things about Costco is the surprising variety of merchandise that makes appearances at the warehouse. We were doing some shopping the other day in the West Plano location, and two food items caught our eye: prepackaged pulled pork and beef burnt ends.

Truth be told, we're already fans of Costco's meat selection. The store is a go-to for many home barbecuers for steaks, ribs, pork and prime brisket, ourselves included. We don't think it's a stretch to say most barbecue fans would be wary of store-bought precooked barbecue, but Costco's reputation for only stocking quality products piqued our curiosity. We grabbed a package of each to take home for a taste test.

The burnt ends are packaged by Mission Hills Bistro and retail for $9.59 a pound, which is at least half the price of what you would pay at any of the area's top barbecue joints. Our package was just short of 2 pounds, and the label promised USA choice beef, fully cooked and ready in 5 minutes. The burnt ends are vacuum packed in a microwavable tray, and at first glance, seemed a little light of the 1.8 pounds listed on the label. Then we found the packet of barbecue sauce under the meat pouch; it seems that the per-pound price also weighs in the sauce packet, which is worth keeping in mind if you're feeding a crowd.

Costco's pulled pork, branded under their Kirkland label, also comes shrink wrapped in its own microwavable tray, but the instructions ask for 7 minutes of your microwave's time to fully heat two pounds of shredded pork. Kirkland pulled pork is a veritable bargain, just $10.99 for a full 32 oz. package (and you're on your own for sauce). 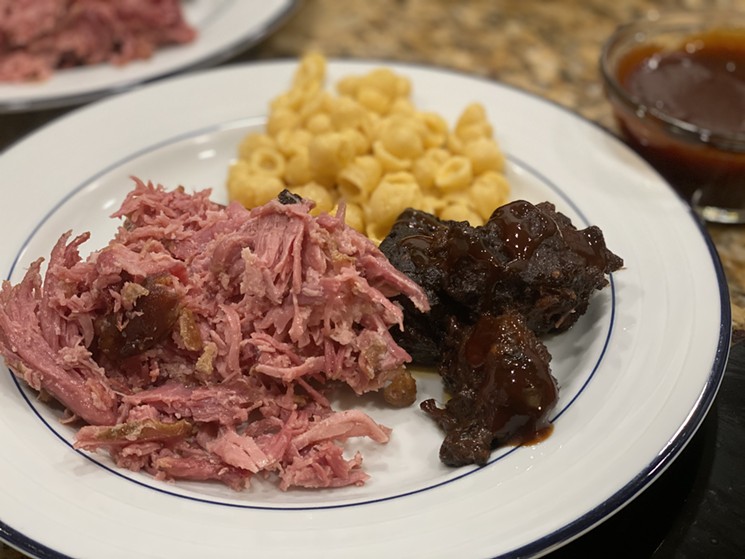 Costco's pre-packaged barbecue is a reasonable approximation of the real thing, but not a full time substitute.
Chris Wolfgang
Both packages of meat come out of the microwave oozing melted fat from the packaging. On the plus side, we generally equate rendered fat with flavor, and neither protein appeared to be dried out when microwaved according to the directions. Just expect messy hands while extricating the meat out of the packaging for serving (and maybe pick up a 12-pack of paper towels while you're at Costco, just in case.)

Once plated, Mission Hills' burnt ends look the part. Each hunk of beef is cloaked in an impressive bark, as if you spent half a day laboring over them with your smoker. On the other hand, the Kirkland pulled pork is impossibly bright pink, almost the color of ham instead of pork shoulder. It's natural to get bits of pink meat in a smoked pork shoulder, but Kirkland's uniformly rosy hue is like nothing we've seen in the wild.

Fork in hand, we jumped in to our plates. Mission Hills attempt at burnt ends isn't half-bad. Each of the hunks of brisket point are tender, and the bark and smoky flavor are reasonable approximations of the smoky delicacy we've ordered across DFW. However, a microwave is a poor approximation of a smoker, and the soggy bark only reinforces that reality.  The package instructions also provide some reheating directions on the stove top, which might firm up the bark.  Mind the instructions; we reheated some leftover burnt ends the following day, and overcooked them to the point of being tough and chewy.

Color aside, Kirkland's pulled pork is perhaps a bit closer to barbecue truth. According to the package, the pork is smoked over hickory for 10 hours before being shredded, and we definitely picked up the smoked flavor. But, the pork was extremely greasy, more so than any pork we've been served at a restaurant. And it's tough to get over the blushing ham color.  The next day, we added pulled pork onto some nachos and popped them in the oven, which seemed to cook off the excess grease and made a quick and tasty meal. 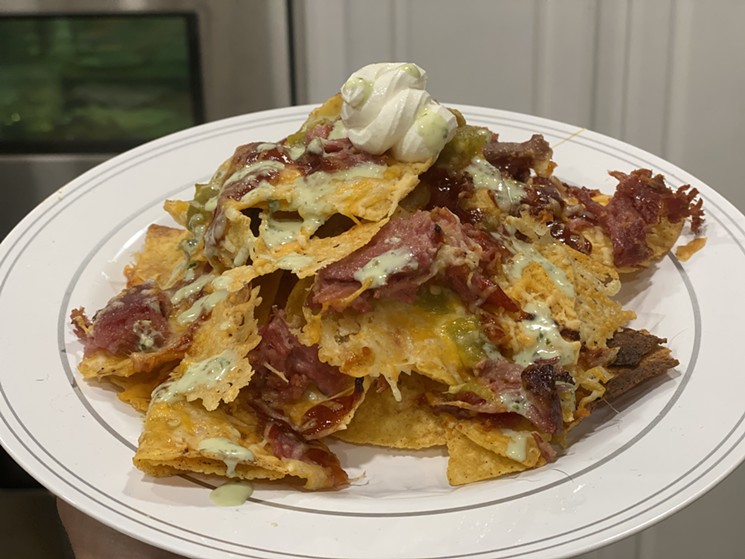 We elevated our nacho game with some Costco pulled pork.
Chris Wolfgang
There's no denying the convenience of having some barbecued meats on hand, particularly measured against   standing in line at a popular joint or spending hours tending a smoker. In that regard, Costco's prepackaged barbecue could add a little variety to an otherwise pedestrian weeknight meal.

We're fortunate to have eaten some truly sublime barbecue in our travels across the area, but we've also sampled fare that has left us wanting. Costco's prepackaged barbecue options land somewhere in the middle of our experiences: better than we expected, but they shouldn't replace a visit to your favorite establishment, either.
KEEP THE DALLAS OBSERVER FREE... Since we started the Dallas Observer, it has been defined as the free, independent voice of Dallas, and we'd like to keep it that way. With local media under siege, it's more important than ever for us to rally support behind funding our local journalism. You can help by participating in our "I Support" program, allowing us to keep offering readers access to our incisive coverage of local news, food and culture with no paywalls.
Make a one-time donation today for as little as $1.