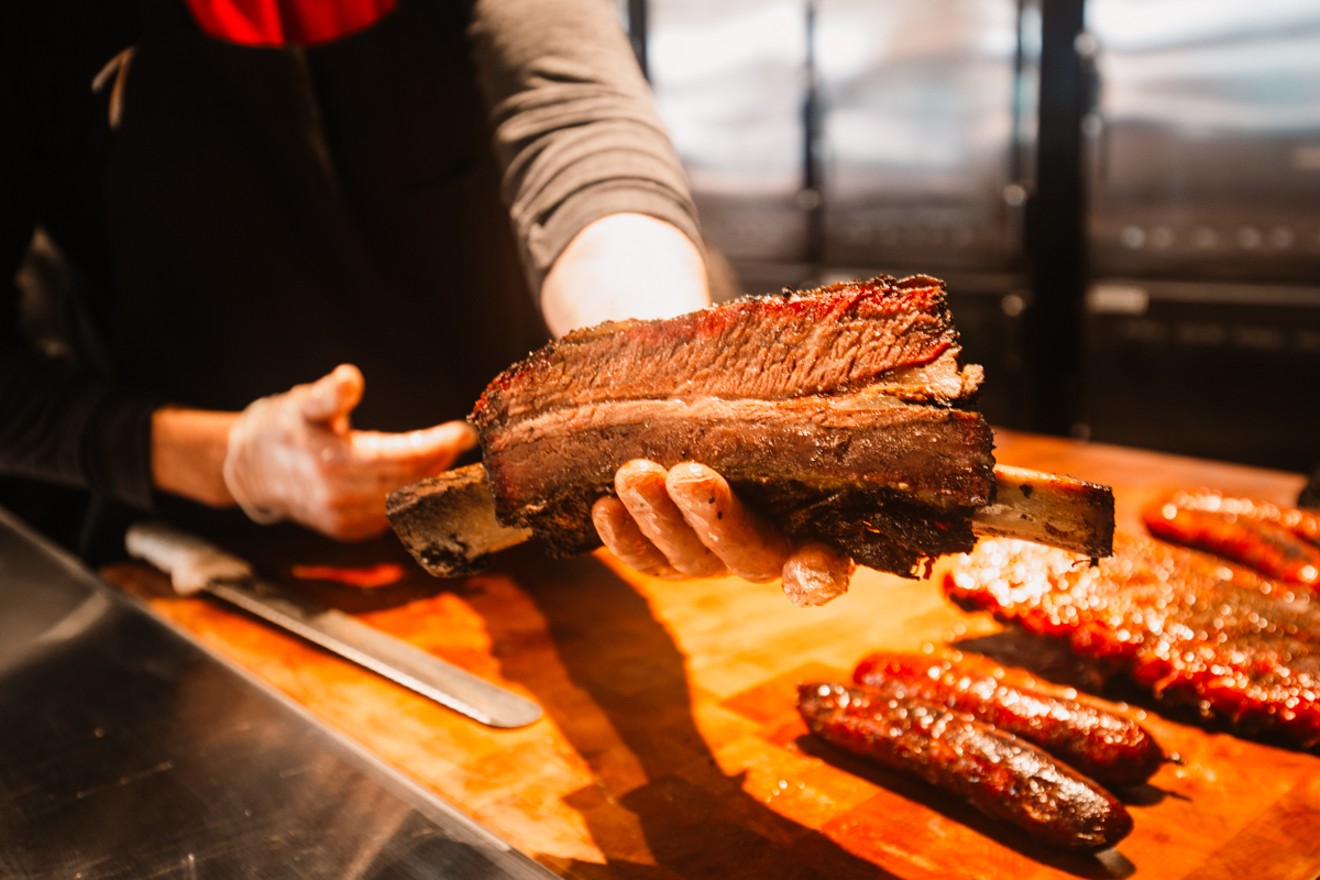 Beef ribs make great photo models. Chris Wolfgang
It feels like an eternity ago when Pecan Lodge moved to Deep Ellum. Five and a half years is a long time in restaurant years, yet Pecan Lodge is still drawing a crowd, with the line in front of their Main Street digs rivaling the red neon Pegasus and the grassy knoll as icons of the city. 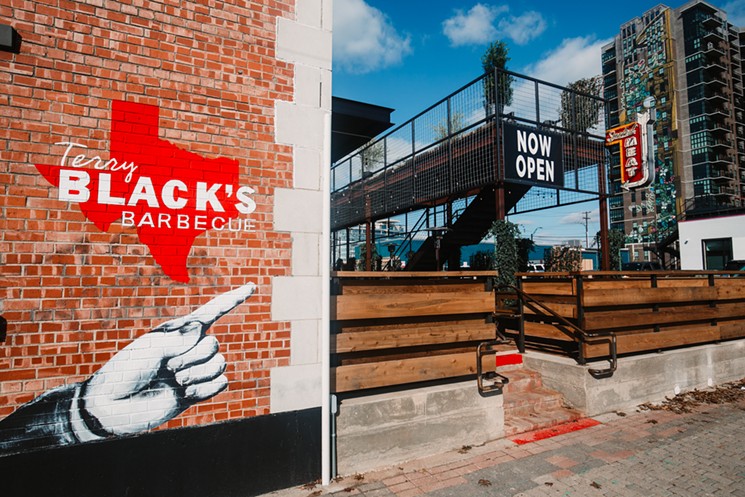 Follow the signs (and your nose) to Terry Black's BBQ in Deep Ellum.
Chris Wolfgang
It's an audacious move to open a barbecue joint just three blocks down the street from arguably the most famous barbecue institution in Dallas, but that's exactly the path Terry Black's BBQ has chosen for their first foray into the city. 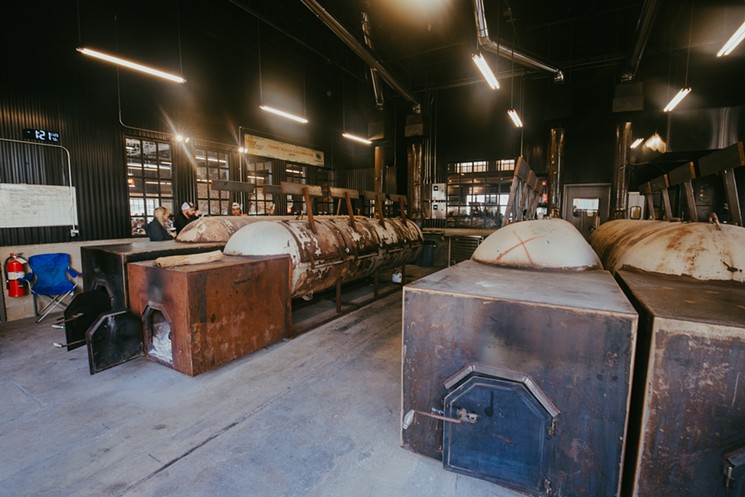 Don't miss the chance to tour the pits of Terry Black's BBQ — you may just learn a thing or two.
Chris Wolfgang
The venture hasn't been without some turbulence. Terry Black's had their eye on the space at 3025 Main St. since late 2017. The building had a tenant, though, in the form of the Dallas Comedy House, whose owner Amanda Austin had two years remaining on her lease of the space. Terry Black's owners made a buyout offer to DCH, which Austin politely declined.

Undeterred, Terry Black's parent company bought the building in 2018, then brought a litany of lease violations and an eviction notice to bear against DCH. After a year of back and forth, DCH moved to a new spot a block away on Elm Street, and Terry Black's began work on the new restaurant, which softly opened last week. 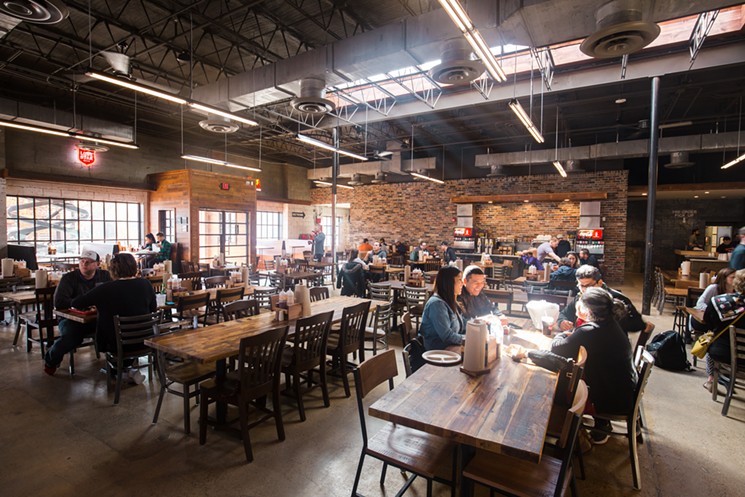 Terry Black's sports plenty of dining space both inside and out at their Deep Ellum establishment.
Chris Wolfgang
Controversy aside, Terry Black's is an impressive venue, with barbecue chops to match. Not only is there a spacious dining room indoors, but Terry Black's also sports two levels of outdoor patio space. Patrons are also invited to tour the pits and get a sneak peek of the work that goes into creating barbecue. It's definitely worth taking a few minutes to talk with the pit crew; and who knows, maybe you'll learn something for your own at-home cookouts.

Inside, it's cafeteria-style service that's a mainstay of barbecue restaurants. Curiously though, sides are picked first when you queue up here. At just $2.50 per side, you can afford to be adventurous. The green beans looked amazingly bright and fresh, and after the server confirmed they tasted as good as they looked, we settled on the beans and some macaroni and cheese, then headed to the meat cutters. 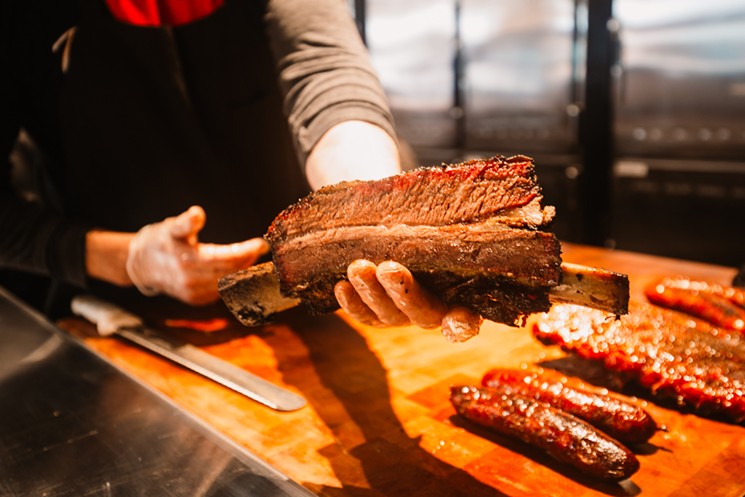 Beef ribs make great photo models.
Chris Wolfgang
Terry Black's continues to educate on the barbecue experience when choosing your meats, and the meat cutter will gladly chat you up to make sure you understand what you're ordering, or in our case, help set up a photo opportunity with a mammoth beef rib.

All meats are cut and weighed to order, so diners can order as little or as much as desired. In our case, our desires were strong, and we built a tray of the barbecue trinity, with both lean and moist brisket ($22.98/lb), a pair of pork ribs ($18.98/lb) and a link of Terry Black's house-made original sausage ($16/lb). Tray sufficiently loaded, we made our way to an open table.

We thought we were being modest by ordering just two slices of lean brisket and one slice of moist, but we still ended up with half a pound of beef. Not that we're complaining: Both cuts of Terry Black's brisket impressed with tender, smoky flavor. If we have one complaint to make, it's with the temperature of the brisket, which registered just slightly above lukewarm. Perhaps ours had spent just a shade too long on the cutting board, and was also just a tick on the dry side; fresher (and hotter) slices would likely bring that melt-in-your-mouth goodness we craved. 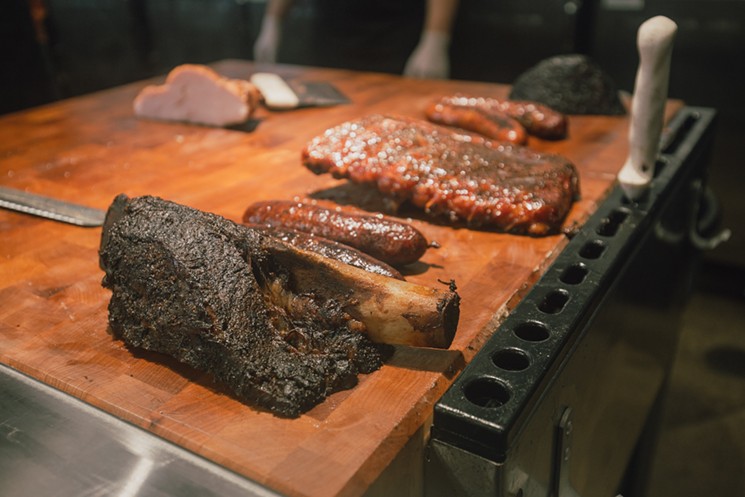 Terry Black's BBQ honed their barbecue chops in Austin, and now bring their fare to Dallas.
Chris Wolfgang
The ribs were also smartly cooked. Anyone can boil a rib to the point of mushiness where the meat slips effortlessly off the bone; to smoke a rib to perfect tenderness and still have a bit of tooth takes some real skill, and that's the case here. They were glazed in a sticky and sweet sauce that tasted almost like Dr Pepper, but not so sweet as to mask the flavor of the pork.

We were equally impressed by the sausage, with a delightful snap to the casing and a mild spice that balanced nicely with each smoky and juicy bite.

The verdant green beans kept drawing our eyes, and our fork. Despite coming from a chafing dish, the beans were perfectly prepared, neither soggy nor undercooked, and well-seasoned with small dices of caramelized onions. The mac and cheese, with its oversized pasta elbows in a creamy cheese sauce, is a competent example of the fare. 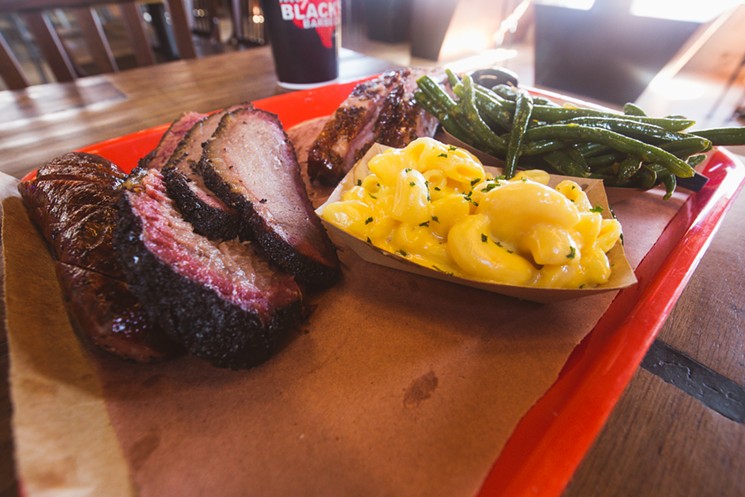 Terry Black's turns out a highly competent barbecue trinity.
Chris Wolfgang
Perhaps the most enjoyable aspect of our visit to Terry Black's was the ability to walk right in and grab plenty of food, just after the peak of a Saturday lunch hour. Meanwhile, three blocks away, the line at Pecan Lodge stretched down the sidewalk when we drove down Main Street and was still present when we left.

We can see multiple factors at play here. People love Pecan Lodge, and it's rightfully earned a place as a Dallas dining destination. Terry Black's is a big name in Austin, but still new to Dallas. And maybe there's still some hard feelings from locals about Terry Black's less than glamorous entrance into the neighborhood.

We hope that's not the case. As trite as it sounds, we're willing to let bygones be bygones. Particularly when those bygones come with another option for craft barbecue; and in that regard, Terry Black's delivers the goods.

Terry Black's BBQ, 3025 Main St. (Deep Ellum). 469-399-0081. Open 11 a.m. to 9 p.m. Monday through Thursday, 11 a.m. to 10 p.m. Friday through Saturday, 11 a.m. to 9 p.m. Sunday.
KEEP THE DALLAS OBSERVER FREE... Since we started the Dallas Observer, it has been defined as the free, independent voice of Dallas, and we'd like to keep it that way. With local media under siege, it's more important than ever for us to rally support behind funding our local journalism. You can help by participating in our "I Support" program, allowing us to keep offering readers access to our incisive coverage of local news, food and culture with no paywalls.
Make a one-time donation today for as little as $1.