Second Rodeo made its debut this September in the Mule Alley section of the Fort Worth Stockyards. Inspired by outlaw country music renegades and the outlaw cowboys who worked in the second rodeo (the prison rodeo), you’ll find homages to these folks on the walls as you enter the brewery. The 14,000-square-foot spot houses two levels of bar space, including a Folsom prison-inspired upstairs, an enclosed beer garden with a retractable roof, a large pet-friendly patio with a double-sided fireplace and a small side patio with outdoor games.

Large outdoor spaces are both family and pet-friendly.
Amy Meyer
The beer garden offers a stage, a small dance floor and kitschy furniture constructed from kegs and car carcasses along with a brightly colored porch and patio chairs. The bar garden is where most of the action is happening, with the crowd gathered to enjoy live music, knock back some cold ones, and order food from one of the dining windows. The stage has three sets of music daily; there is never a cover charge, and the music is outlaw country, Western swing and Texas blues.

In terms of eats, owner, chef and restauranter Jason Boso added Truck Yard’s famous cheesesteaks to the menu, but Second Rodeo’s focus is on unique flavors of wings, such as Lime in the Coconut, which has lime and coconut glaze and a sprinkle of graham cracker salt. The Mandarina has a Mexican orange soda glaze topped with Tajin. All are served with a side of fries. The Texas Cherry Cola wings are tender, doused with a generous amount of cherry cola glaze and a side of Pop Rocks to sweeten things up. 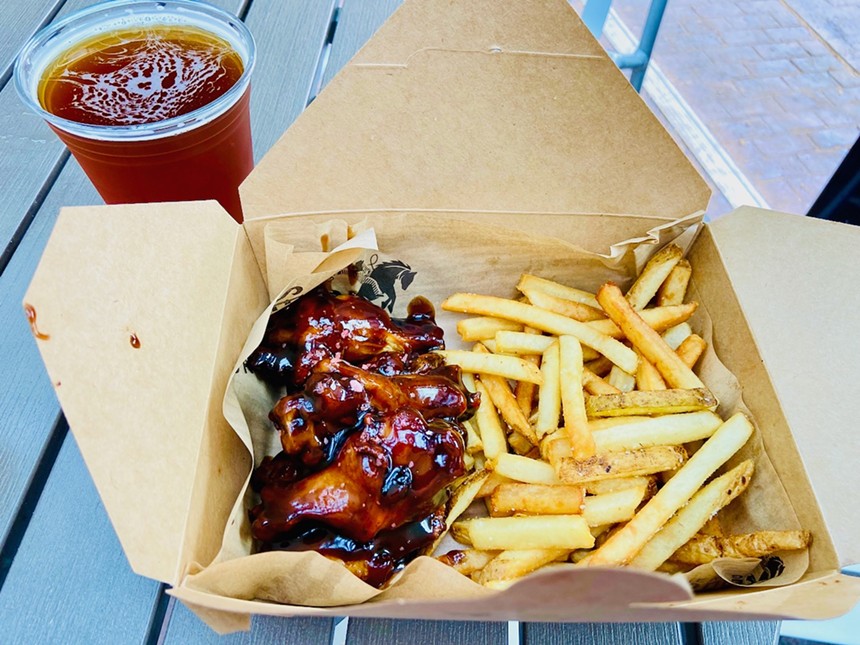 Second Rodeo houses a full production brewery in-house, so you’re always guaranteed a fresh brew. The lineup includes mainstays such as Big Buckle IPA and Barrel Queen Blonde, but they also offer some unique beers from their sister concept, Beard Science Sour House, like the Lemon Cucumber Sour. They do not offer flights but are happy to give you a taste before committing to a full pour. They also do growler fills to send you home with your favorite brew.


The brewery also has a wide array of guest breweries on draft, frozen and craft cocktails on tap, canned beer and seltzers, wine, and plenty of hard liquor. The Banana Bailey's Colada featuring rum, pureed banana, Irish cream, Coco Lopez was tasty, but instead of coming out as an icy, blended frozen concoction, it was light and fluffy, more reminiscent of whip cream.

You’ll find a large selection of rotating house-brewed beers and cocktails, “funkified” chicken wings, and you’re almost always guaranteed some live music with three sets daily. Take a look around, the décor is carefully curated with nods to country’s infamous outlaws throughout the space and some surprises as well (don’t leave without a trip to the bathroom).

Second Rodeo Brewing Co., 122 E. Exchange Ave., No. 340 (Fort Worth), 11 a.m. - 12 a.m. Sunday-Monday and Wednesday-Thursday. 4 p.m. - 12 a.m. Tuesday., 11 a.m. - 2 a.m. Friday - Saturday.
KEEP THE DALLAS OBSERVER FREE... Since we started the Dallas Observer, it has been defined as the free, independent voice of Dallas, and we'd like to keep it that way. With local media under siege, it's more important than ever for us to rally support behind funding our local journalism. You can help by participating in our "I Support" program, allowing us to keep offering readers access to our incisive coverage of local news, food and culture with no paywalls.
Make a one-time donation today for as little as $1.