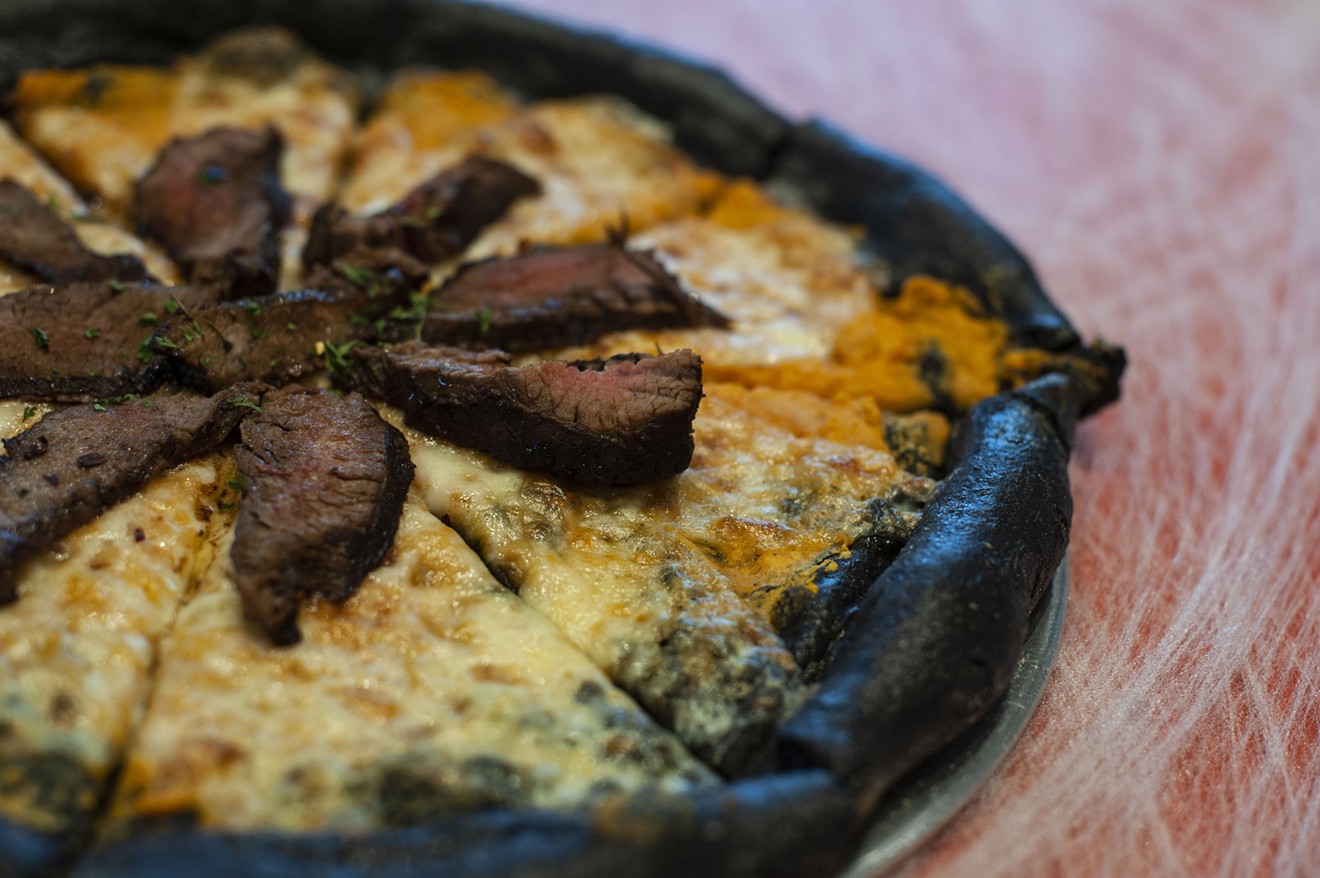 Specialty pizzas, like the RIPizza made for Halloween, helped keep Vector Brewing alive. Courtesy of Vector Brewing
Until about a year ago in Dallas, a local distillery, brewery or brewpub taproom was a great place to while away an afternoon. Most were family-friendly during the day, several had nice patios and many hosted pop-ups or food trucks for special events.

Then came the pandemic and a roller coaster ride of closing, opening, closing again and then reopening, but only if they served food. Tapping into a reservoir of resilience, they sailed over this hurdle, and food programs from makeshift to magnificent were born.

When given a chance to thank someone who helped her business through the obstacles, Molly Reynolds, owner and creative director of Celestial Beerworks, mentioned Rudy Peña of Roodie’s Shack, whose pop-ups were popular at other breweries too. All of the Dallas beer industry businesses adapted in the best way they knew how, and the fledgling Lockwood Distilling Co. did the same.

Now that taprooms are allowed to be open again (with or without food service) many partnerships formed out of necessity are here to stay. For these businesses and for us, it feels like waking up from a yearlong nightmare just in time for patio season.

When you’re ready to venture out, make your way to these four craft-beer businesses and what I like to call the little distillery that could. They’re all serving phenomenal food that’s worthy of your attention, even if you’re really just there to drink. 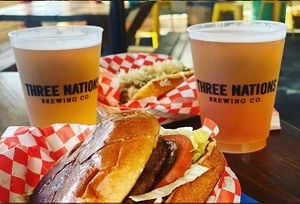 In September 2019, 3 Nations Brewing moved from Farmers Branch to Carrollton and opened a spacious new taproom complete with an outdoor patio Biergarten. The outdoor space was a saving grace last summer when a food program became essential to opening for business.

In order to offer the food necessary to open, the brewery hired long-time Texas caterer Tom Grace, of TCG Food Services, to open the 3 Nations Biergarten Grill on the patio. If that name sounds familiar, it might be because Grace is the creator of the Big Tex Choice Award-winning funnel cake queso burger and a long-time food vendor at the State Fair of Texas.

“The 3 Nations Biergarten Grill is a full-service restaurant that offers quality food that pairs well with our fresh brews,” John Royer, a business manager and investor in 3 Nations says. “Once a way to satisfy TABC requirements, the Biergarten Grill has become so popular that we are working with the city of Carrollton to formalize this successful relationship into a permanent on-site kitchen.” 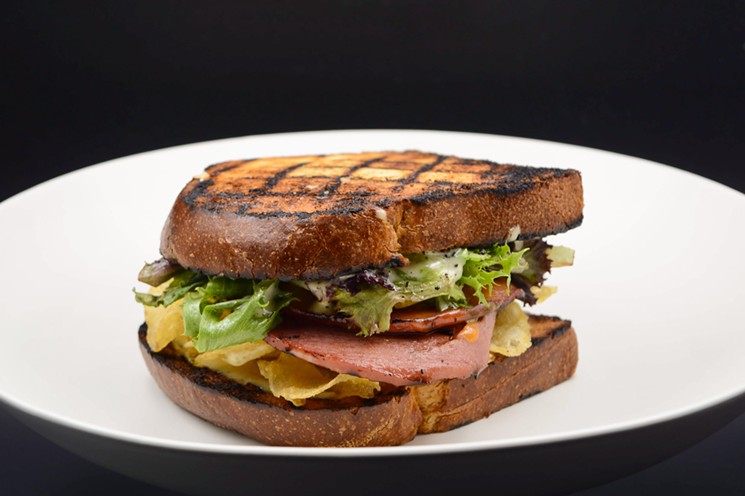 Lockwood Distiling Co.'s bologna sandwich looks better than any we ever whipped up.
Zealyn Julka

506 Lockwood Drive, No. A, Richardson

Sally and Evan Batt opened Lockwood Distilling Co. almost a year and a half ago, and their intent for the neighborhood distillery in a residential area was to offer great food with cocktails made from their vodka and other liquors. They hired local chef Justin Box to create the menu.

The distillery was barely up and running when the pandemic prompted them to switch to making hand sanitizer, at first to donate and later to sell. Their next shift had them offering takeout food and drinks.

What helped their business take off was inviting local musicians to come play for customers who were picking up to-go food. “As things started opening up, the musicians stayed. We had people showing up with lawn chairs in the parking lot. The next week, more came and their tailgating game improved. Dogs, baby tents, even table decor. We had ourselves an outdoor concert venue,” co-owner (and table busser) Sally Batt says.

Fast forward to now and Lockwood’s liquor is on shelves in local stores and the distillery still hosts live music on the weekends. Julie Campbell runs the bar program and Julio Ortiz heads a kitchen turning out some pretty fantastic food.

Highlights of the food menu include wagyu beef burgers with Boursin cheese and Dirty South Tots with house-made hot sauce and pimento cheese, sour cream and green onions. Stellar sandwiches include a smoked bologna sandwich and the Ray’s pastrami made with brined and smoked Texas brisket, fresh sauerkraut and swiss cheese on rye bread.

Cocktails are creative, and for spring, the Mr. Sean stands out. Made with Lockwood’s Hibiscus Vodka infused with jalapeño, the drink is finished off with Topo Chico and lemon. You can also order wine (but no beer) inside or on the patio.

It’s been a journey to get here, but the Batts are happy with where things have ended up for the moment. “Through COVID, our community showed us who they wanted us to be, and we are so thankful for it,” Sally says. 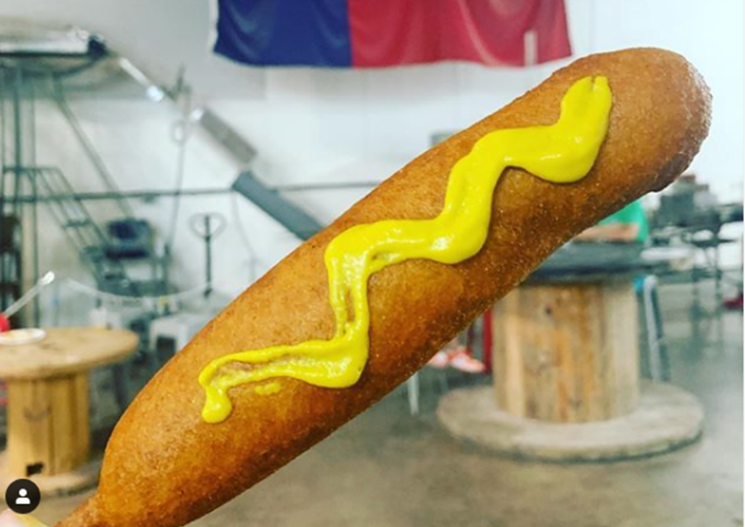 Oak Highlands Brewery has been pairing with partners to offer food since 2015. Food trucks came often, and creative events like doughnut pairings were on the menu of events. Then came the pandemic.

“At the beginning of the pandemic shutdown, we were only allowed to sell beer to go,” Ryan Childers, marketing and events director says. “We partnered with local restaurants to have family meals to go as well. This was popular and helpful for other local small businesses.”

“Once we were able to open for on-site sales, we were required to have a food option. This is when we expanded our food truck vendor program,” Childers says.

Joey Pena from Double M Barbecue was an early partner, and Cane Rosso and Cousins Maine Lobster have been popular with patrons.

The most impressive part of the program may have been the ordering and group number/ticket number system the brewery set up for their pop-up with Fletcher’s Original Corny Dogs in their large parking lot. The brewery accommodated hundreds of people waiting for the iconic Dallas food on a 107-degree day and made the wait enjoyable, or at least tolerable, by eliminating long lines.

Now, the food truck program continues. “We enjoy partnering with local restaurants and food trucks as much as possible. We try to have different styles of food every day that we are open,” Childers says.

Before the pandemic, TUPPS Brewery invited different food vendors out each weekend and only had food on-site Fridays and Saturdays. Their sales team also took the beer to the food, partnering with bars and restaurants for tastings, pint nights and beer dinners with different courses of a meal paired with different TUPPS beer.

When TABC allowed taprooms to open as restaurants, the brewery tapped into existing relationships with food trucks to keep the doors open. “Cousins Maine Lobster would come to sell during our beer-to-go hours, and Fletcher's Original Corny Dogs came out for the release of our Cotton Candy Shandy,” says Nicole Wright, who’s in charge of taproom events and marketing. “Both were helpful with a little boost during tough times.”

The brewery also partnered with Barley by Rye, a “gastrovan” serving locally sourced food and made it a permanent fixture. “Barley by Rye is on-site full time with us here at the brewery,” Wright says. “Their trailer is actually permanently installed here at TUPPS (with electricity and water), so it never leaves. They are open with us 5 days a week.”

“Having food on-site full time has really increased the value in our taproom experience, so we will definitely continue to have food available to patrons on days we are open. In the first half of 2022, we will be moving to our new facility and plan to have a restaurant of our own there. The goal is to craft our own recipes and offer a lunch and dinner menu seven days per week and increase the frequency of beer pairings and dinners at the brewery,” Wright says. 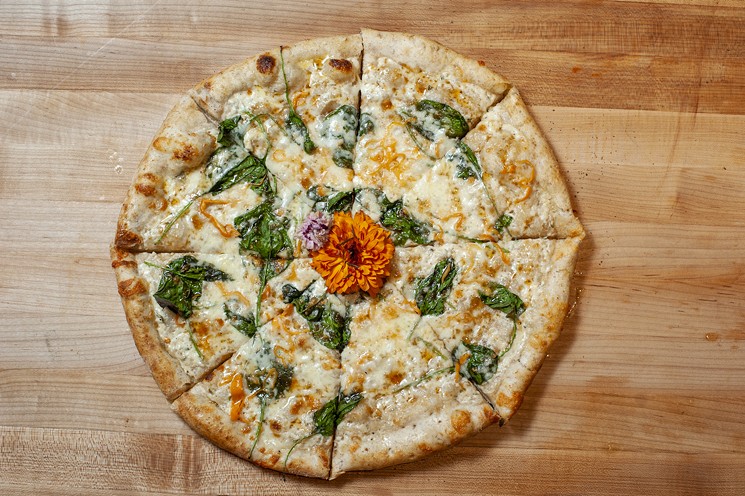 We're not sure what the habanero-infused glitter honey on Vector Brewing's Angry Bee pizza is, but we want it.
Courtesy of Vector Brewing

The gourmet sourdough crust pizzas and other scratch-made food at Vector Brewing are much more than just something to munch on with your beer, and they almost never happened. The federal government shutdown in December 2018 nearly wrecked the brewery’s funding opportunity.

“We originally weren’t even going to have food. The plan was to be located in a shopping center surrounded by restaurants,” Veronica says. But then, the opportunity presented itself.

“While our focus is indeed beer — we are a brewpub, after all — we couldn’t just let food be a second thought. This is Dallas. It’s a major food city with some of the best restaurants in the country. If our food sucked, no one would care about our beer. So, much like our beer, we wanted to have fun and do something unique,” Veronica says.

The Bradleys had always considered pizza as an option for food at the brewery, and it seemed destined when chef Brittany Bryant approached them. Bryant, known to many as Chef Rii, invented the creative pizza options and has been hands-on in the scratch kitchen since the food program began.

“She came in one day with this bowl of goo (turns out it was a sourdough starter), started baking crust left and right, and our crust has continued to get better and better over time,” Veronica says.

“Our starter was created last February and quickly grew from 6 cups to 5 gallons,” Bryant says. “Our pizza is in such high demand that by last May a second starter had to be developed. Now for every batch of dough, we alternate between the starters so they both stay properly fed and rested.”

The dough is just the beginning, and these pizzas are begging to be tried. The Angry Bee is an Alfredo pizza with habanero-infused glitter honey, spinach, shaved habaneros and an edible flower. The vegetarian Keep Calm and Curry On pizza has a red curry base topped with Vector cheese blend, tempura-battered fried tofu tossed in spicy agave, cilantro, chevre and a side of house tzatziki.

All of the signature pizzas, as well as the build-your-own, are better when paired with a variety of Vector’s brews. The menu also includes pastas, salads and better-than-bar-food shareables like Brussels sprouts with blue cheese dipping sauce, spicy beef meatballs and Southern-fried onion strings.

There’s a kids menu and special rotator pizzas for fun. St. Patrick’s Day brought a pizza with scalloped purple potatoes, shaved corned beef and beer-braised cabbage. For Halloween, the RIPizza had a crust blackened with squid ink and flat-iron steak and sweet potatoes on top.

The brewery, with its expansive patio, is also serving brunch on Saturday and Sunday. Even if you don’t drink beer, you’re going to want to try the Big Bad Biscuit or Migas pizza.
KEEP THE DALLAS OBSERVER FREE... Since we started the Dallas Observer, it has been defined as the free, independent voice of Dallas, and we'd like to keep it that way. With local media under siege, it's more important than ever for us to rally support behind funding our local journalism. You can help by participating in our "I Support" program, allowing us to keep offering readers access to our incisive coverage of local news, food and culture with no paywalls.
Make a one-time donation today for as little as $1.