At the New Hudson House, Skip the $90 Seafood Tower and Treat Yourself With a Killer Burger 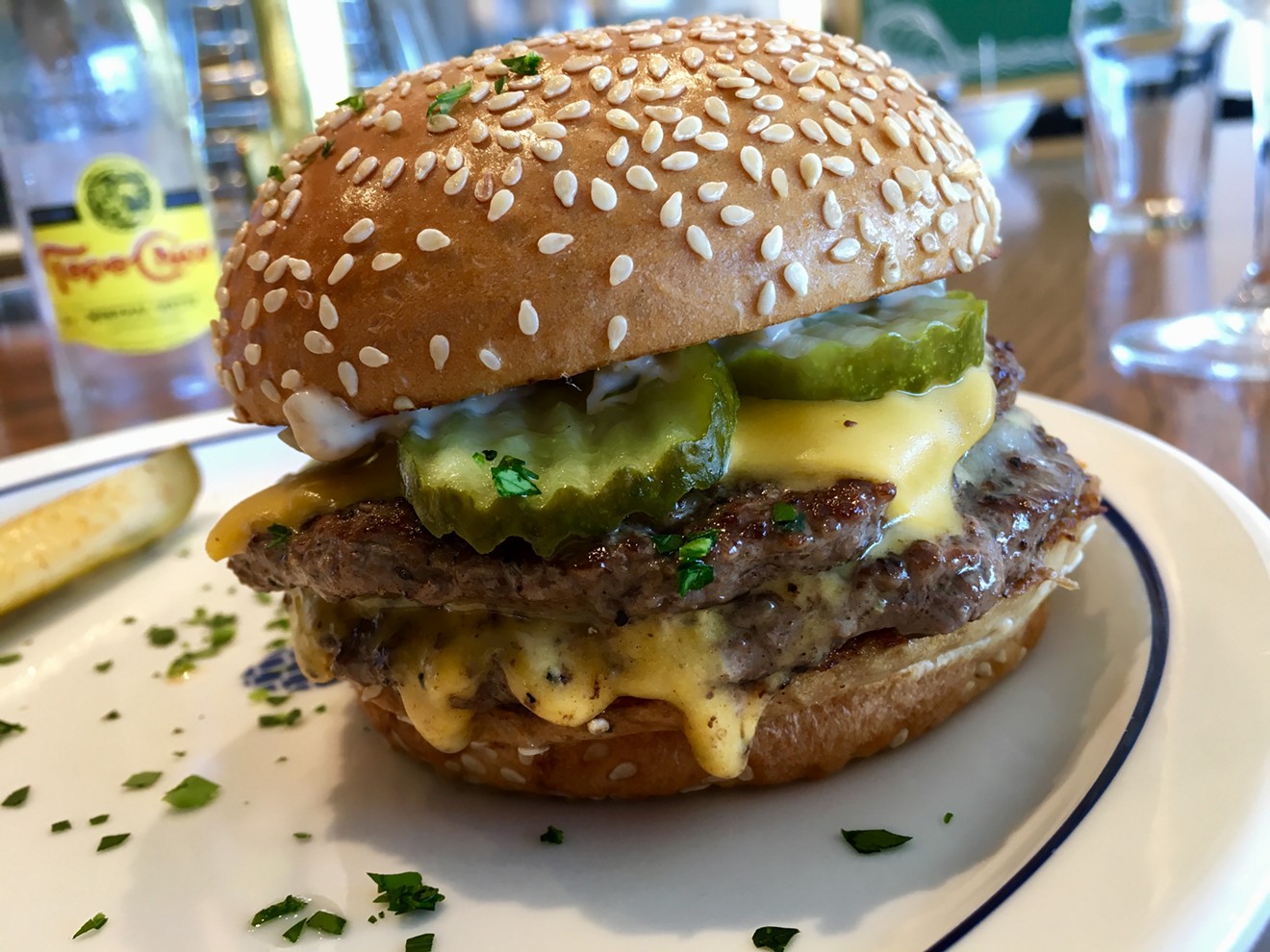 Pickles, American cheese and a jalapeño-spiked dressing are all the toppings you'll need for the burger at Hudson House ($12 at lunch). Nick Rallo
Hudson House is like the opera: You need to go at least once. It feels inevitable that you’ll be eating there. The Inwood eatery from the people who brought us such yachty sandwich joints as East Hampton Sandwich Co. will draw you through the doors with Instagram-sharp shots of lobster rolls, champagne jammed into ice and piles upon piles of oysters.

Sitting at the bar, a trance takes hold: The Blue Point and Chappy oysters from Martha’s Vineyard are big enough that they look like footprint casts from Sasquatch. I actually said “wow” out loud when in the shadow of their presence. Near the crusty shell pile are wedges of lemon and brisk sauces to ease their giant bivalve passage into your body. Then, there are the sandwiches.

The cheeseburger emerges from the kitchen confidently, on a plate loaded with petals of parsley like the roses in American Beauty. A neat distribution of sesame seeds adorns the bun as if they’ve been individually added, and it’d all be oh so precious if it didn’t taste so damn good.

Hudson House, from Hunter Pond and his merry men, opened at the end of July. You can sample oysters at the bar or inhale a $90 tower of the stuff called The Royal. (It comes with a whole 2-pound lobster and king crab.) Waiters wear bow ties, and the plates rest on triangle-folded white napkins. The restaurant will trick you into thinking there's a boat waiting for you to climb on before it shoves off. 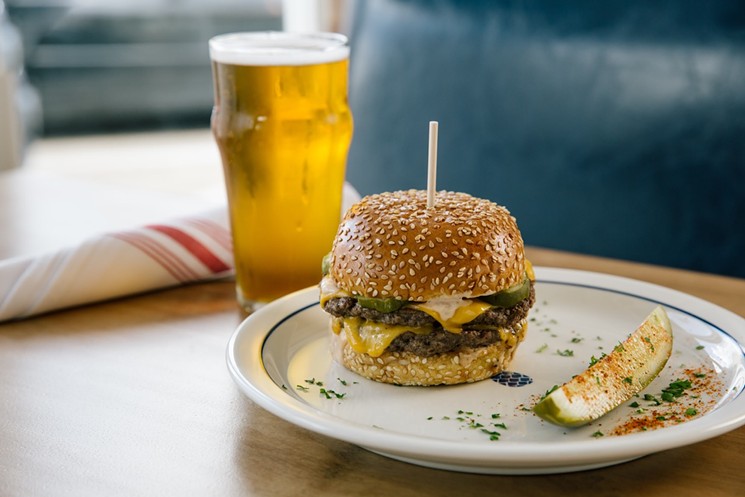 The Hudson House burger features two thick, 80 percent prime beef, 20 percent fat patties.
Courtesy of Kelsey Foster/Hudson House
The cheeseburger is structured more humbly: Crinkle-cut pickles, vinegar bit and a little sweet; a sparky Million Island sauce (a thousand island dressing amped up with jalapeño); and American cheese are all you’ll need to be wrapped up in a good meal. Fries don’t come with it, but you’ll get a seasoned pickle spear. Even at $12, I didn’t miss the fries. Good burgers with American cheese just need acid, and the pickles oblige.The sesame seed bun is a superbly chewy but light brioche, a network of porous but buttery structures inside the crust.

The nutty chew and pop from the seed counterweights the American cheese and spicy sauce. Two thick — but not too thick — 80 percent prime beef, 20 percent fat patties get the now ubiquitous melt of American cheese. There’s texture and heat. You’re going to like this burger. Polishing off the first half of the sandwich, using my finger to dab sesame seeds, I found I needed to convince myself to slow down. We're on a boat, after all. We are on a boat, right?

Hudson House hosts the kind of burger addition to Dallas that no one really asked for, but sitting with one, next to wood newspaper sticks and the oyster bar that’ll make you feel like the salty, cold ocean dock is nearby, you’ll welcome the sandwich with open arms. There’s a tower of shrimp, champagne, clams casino and American cheese. Why waste energy contorting yourself into a devil’s advocate? This is, simply put, a delightful cheeseburger. Halfway through, I felt like embracing the burger as a solid sandwich at a neighborhood seafood joint.