Last Look: One Last Brunch at Henry's Majestic Prior to Closing (for Now) Henry's Marrow Spiked Burger, for those who can never get enough bone marrow in their diets. Hank Vaughn
After eight years, Henry’s Majestic on McKinney Avenue (along with its Atwater Alley speakeasy) is closing up shop on October 30. In what has unfortunately become an all-too-common occurrence, the landlord has decided to sell the building to developers.

This follows in the wake of big-money buyouts and the subsequent closings/relocations of Dallas favorites such as The Grapevine and Ten Bells Tavern, which have already closed or will in the next year. It's all in the name of "progress," but one wonders whether yet another mixed-use shopping and high-end apartment living complex can really be considered moving the city forward.

Henry’s Majestic, like The Grapevine and Ten Bells, plans to eventually reopen. We recently visited for a fresh look, which has since turned into a last look — for now. You have until the end of the month to swing by. 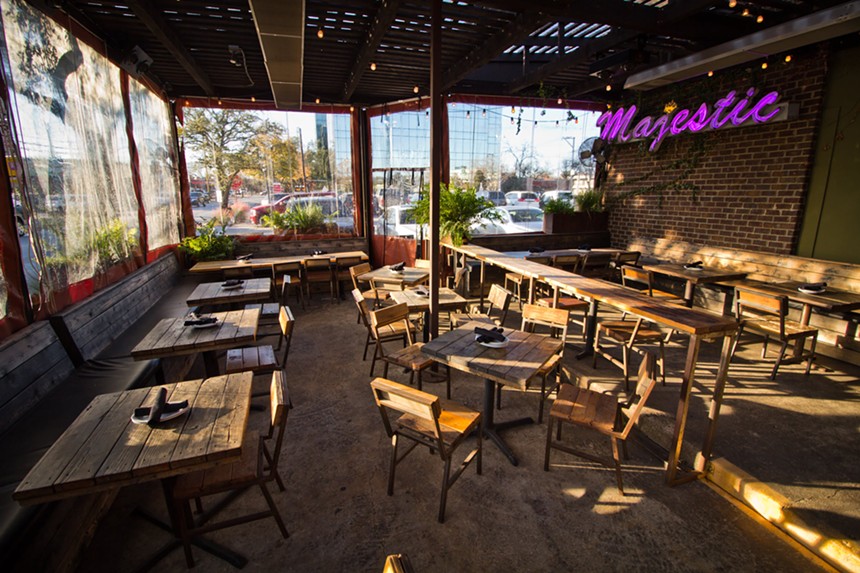 A warm and inviting patio always awaited you at Henry's Majestic on McKinney Avenue.
courtesy of Henry's Majestic
We went on a sunny day with a nice, light breeze, allowing us to take advantage of the outside patio seating. The patio is dog-friendly (cats are out of luck), and we got to watch a white furball of a puppy frolic while we sipped on our beverages, a garden bloody mary and a frozen Tito’s cocktail with raspberry and lime. 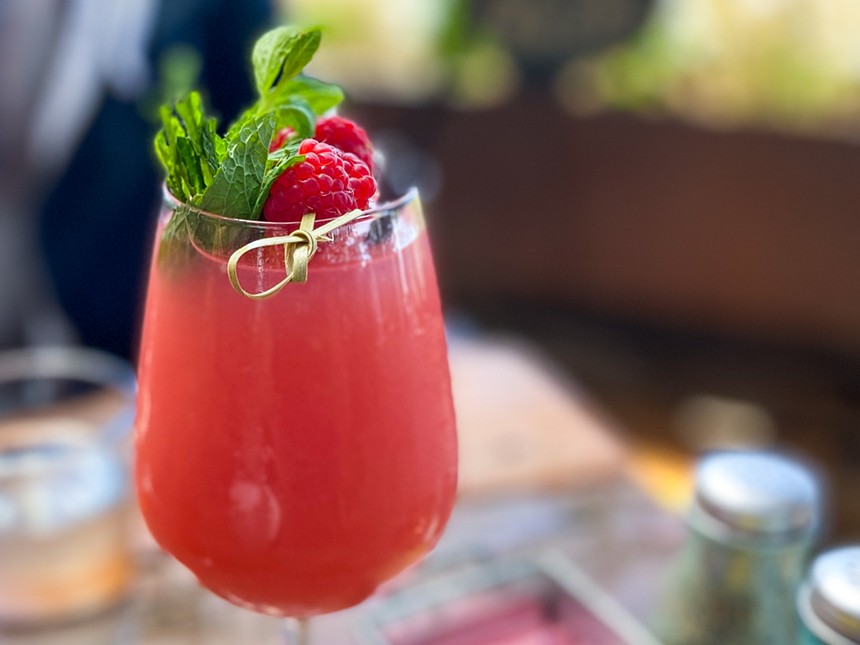 Nothing at all wrong with this frozen Tito's drink with a touch of lime and raspberry.
Hank Vaughn
Both were bright and light and refreshing, and the right size to enjoy without worrying about the drive home. The bloody mary was garnished with fresh dill and cucumber and flavored with Henry's home-made hot sauce; the frozen Tito’s had raspberry and lime with some fresh mint leaves as garnish. 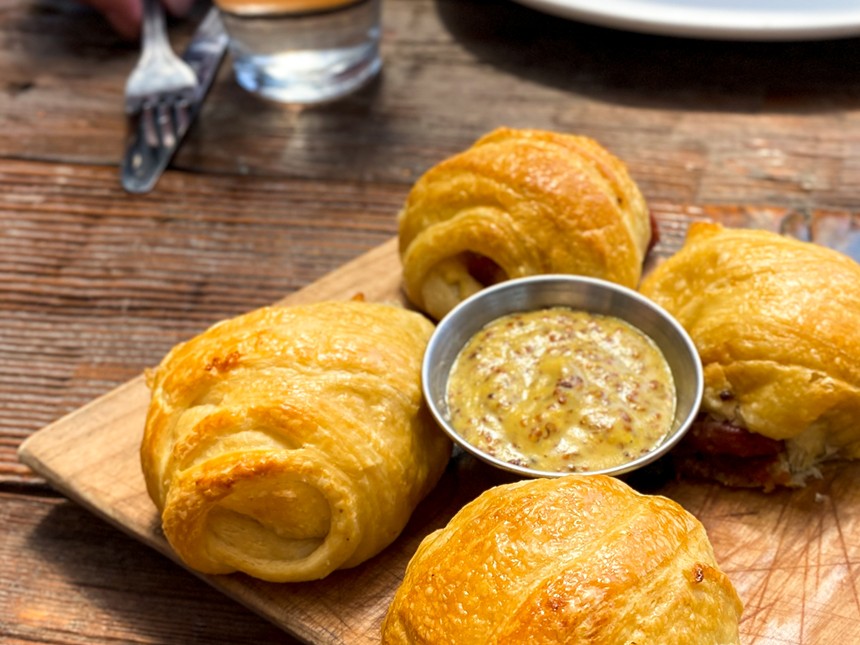 Pigs in puff pastry.
Hank Vaughn
The puppy was still bounding around the space when our pigs in puff pastry arrived. These little darlings, which come four to an order, are jalapeño cheddar sausages wrapped in a golden-brown pastry with some house mustard on the side for dipping along with some onion jam. 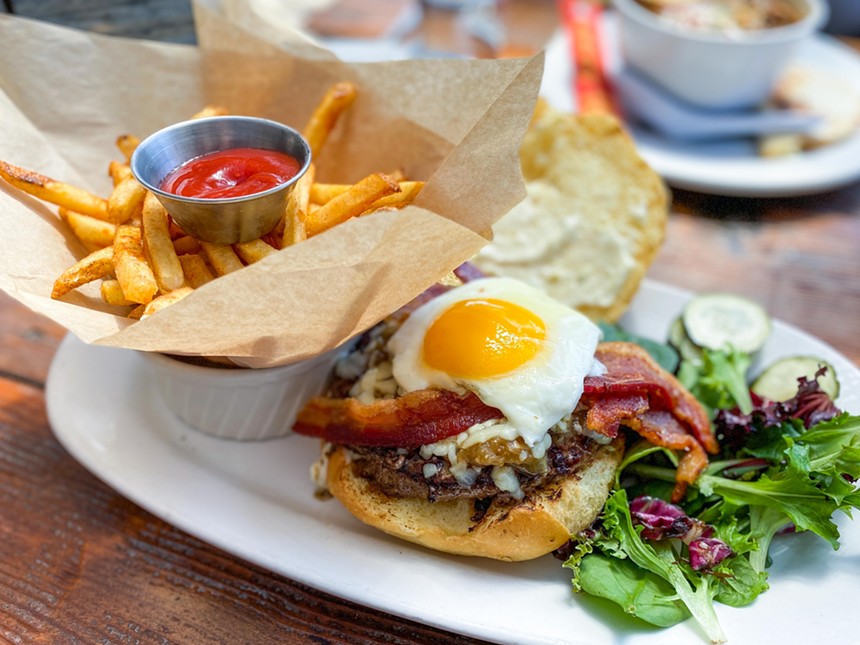 Henry's Marrow Spiked Burger, for those who can never get enough bone marrow in their diets.
Hank Vaughn
We were on a bone marrow kick at the time (still are, to be honest), so we had to try the marrow-spiked burger, which was ground Akaushi beef mixed with bone marrow topped with bacon and a fried egg, with onion and cheddar cheese and a small side salad of mixed greens. The bone marrow didn’t really stand out as a noticeable component to the patty but rather added an extra richness and umami beef flavor that would have been absent without it. The egg was perfectly cooked. 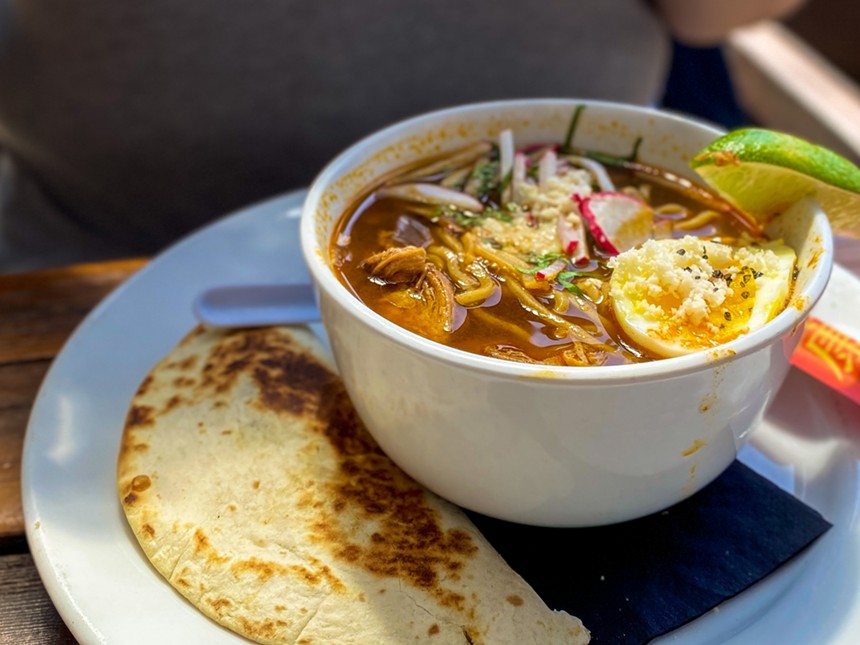 Birria Ramen and side taco.
Hank Vaughn
Our other main was a small bowl of birria ramen, which consisted of braised pork, cotija, egg, cilantro and lime, all in a rich ramen broth that did the job on a breezy late morning. It came with a taco.

We never got a chance to try out the speakeasy, Atwater Alley, which is a shame considering the Observer named it the best speakeasy of 2022. We didn’t really visit Henry’s as much as we’d have liked, either. We all have just a few more days (and a couple of brunches) left before the place (hopefully, temporarily) closes down on October 30.

Co-owner Andrew Pop remains optimistic, "We hope that our customers will come by and dine one last time in this amazing space over the next few weeks! Our plan is to reopen Henry's Majestic in a new location, so the hunt continues for a space! Stay tuned."

Agreed, and here’s hoping that deep-pocketed investment groups leave a little bit of Dallas that is unique and exciting around for a bit longer.

4900 McKinney Ave, Dallas. 3 p.m. – 10 p.m. Wednesday – Thursday; 11 a.m. – 11 p.m. Friday; 10 a.m. – 11 p.m. Saturday; 10 a.m. – 10 p.m. Sunday; bar: 6 p.m. – 2 a.m. Thursday – Sunday.
KEEP THE DALLAS OBSERVER FREE... Since we started the Dallas Observer, it has been defined as the free, independent voice of Dallas, and we'd like to keep it that way. With local media under siege, it's more important than ever for us to rally support behind funding our local journalism. You can help by participating in our "I Support" program, allowing us to keep offering readers access to our incisive coverage of local news, food and culture with no paywalls.
Make a one-time donation today for as little as $1.