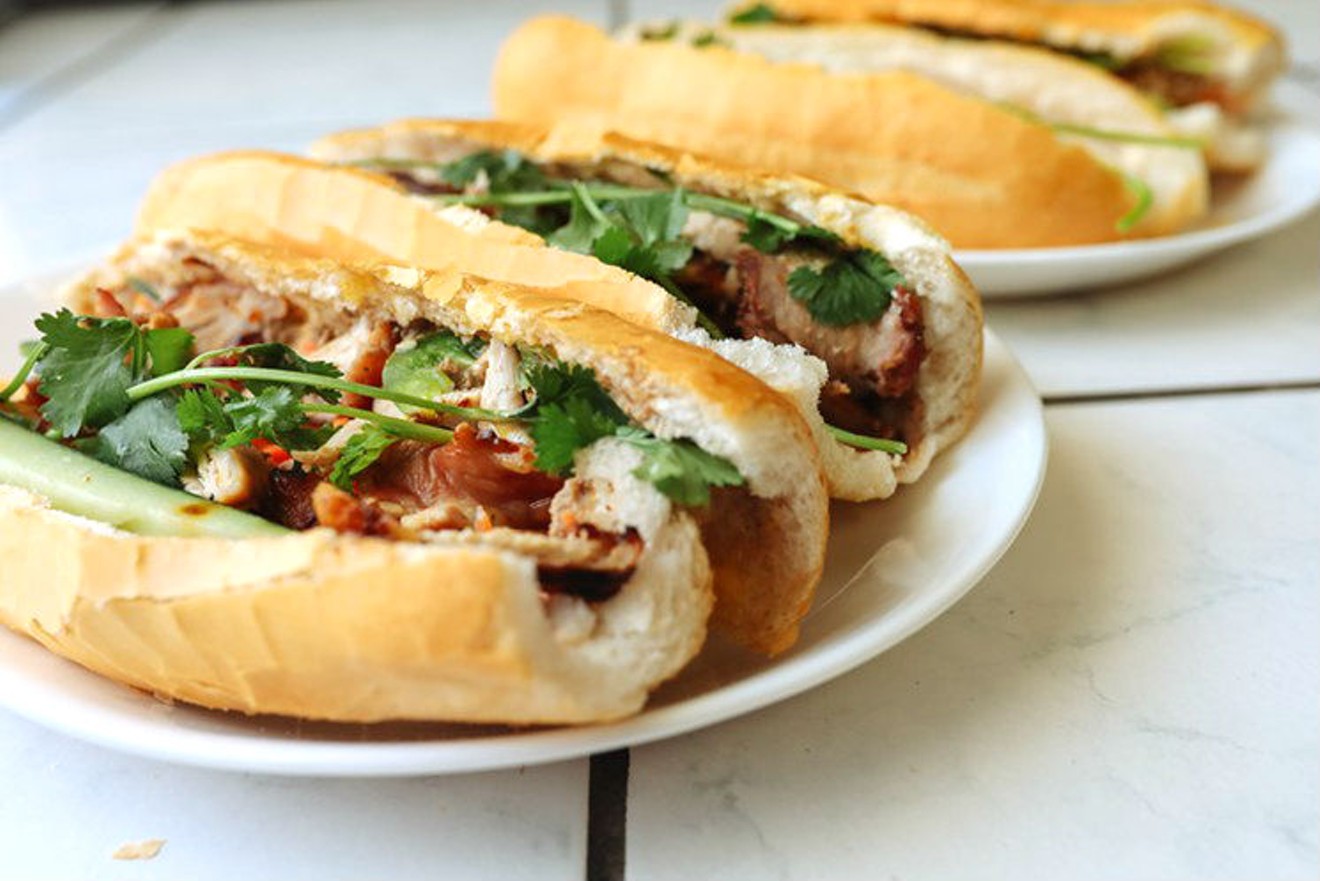 Quoc Bao Bakery doesn't fill sandwiches like the rolled ham sub out to the ends, but the loaves are so good that nobody complains. Kathy Tran
Every so often, excellence is so concentrated in one family or location that it feels like the product of incredible fortune or divine favor. We tend to take these events for granted instead of stopping to think about how unlikely they are.

Two of the best tennis players to pick up rackets are sisters who learned the game together on a public court in Compton. For decades, America’s confused letter-writers got help from two advice columnists, Dear Abby and Ann Landers, who were, in fact, identical twin sisters named Pauline Esther Friedman and Esther Pauline Friedman. And 85 percent of Hollywood blockbusters from the past seven years star at least one blond Australian named Hemsworth.

But I wanted to know: Which one is better?

The answer is not so simple, of course. Quoc Bao and Saigon Deli are equally great but for different reasons, and any diner’s preference will depend on taste. It all boils down to the fundamental question which professors in Dijon-stained tweed jackets ask on the first day of Sandwich Philosophy 101: Which is more important to the sandwich, really great bread or really great filling?

For those who answer “bread,” Quoc Bao Bakery awaits. This isn’t exactly surprising, given that Quoc Bao is a genuine working bakery which happens to sell sandwiches. On my visits — and there have been many of them — Quoc Bao is always full of 6-foot-tall racks with rows of freshly baked baguettes, lined up perfectly straight from the ovens. Each cart holds up to 400 baguettes. It’s a breathtaking sight and a joyous smell.

Quoc Bao’s bread is like none other, with cracks that run both along the top and across. A loaf here looks like a cubist painting of bread. And the crust is ultracrisp, its little pieces shattering off oh-so-satisfyingly between the teeth. The bread at Saigon Deli is more conventional; it’s very good, too, but with more crunch than crisp and without the same snap.

Quoc Bao knows what it has in the house bread; it doesn't fill sandwiches out to the ends, but the loaves are so good that nobody complains.

Both of these banh mi shops offer about a dozen types of sandwiches — 10 at Saigon, 14 at Quoc Bao. Both charge $3.50 to $3.75 for each sandwich, and one sandwich — the same size at either place — is enough for a filling meal. Both offer a buy-three, get-one-free discount. Both ask customers if they want all the veggies included: cucumbers, pickled carrots, jalapeño slices, whole cilantro stalks.

But there the similarities stop. Quoc Bao, despite its longer menu, sticks to varieties of pork, barbecued meat and an extensive list of combos; Saigon Deli adds less-typical fillings like sardines, fried fish cakes and “pork organ grill” (liver and tripe).

Quoc Bao offers 14 types of sandwiches.
Kathy Tran
I’ve got two favorite orders at Quoc Bao. Sandwich No. 8 ($3.50) combines seasoned, grilled pork with sliced-up meatballs; sandwich No. 14 ($4) combines slices of “white ham” with roasted chicken. The barbecue meat rub is gently spicy and savory all the way through. White ham is exactly what it sounds like, but the roasted chicken — though not the tenderest chicken I’ve ever tasted — is cooked in a beautiful sweet-savory, soy-pepper marinade that makes the meat addicting. I have to stop myself from pulling bits of chicken out of the sandwich.

Some of my Quoc Bao sandwiches come with big gobs of bright yellow mayonnaise that drop out onto the butcher paper. Saigon Deli is a little easier on the mayo and a little heavier on just about every other filling. Indeed, the sardine sandwich ($3.50) sports two enormously meaty sardines, the fillets more or less whole and each a good inch thick, pushing the pickled carrots, cucumbers and cilantro stalks out the edges of the baguette. If only the sardines came in the traditional tomato-chili sauce, the sandwich would be peerless.

There’s a darn good barbecued pork sandwich ($3.50) at Saigon, though, as well as some killer pate ($3.50). The huge jalapeño slices here, cut diagonally for extra surface area and seeds, play especially well with a fatty schmear of bright pink pate that might taste excessive by itself.

Finally, both restaurants offer bonuses of different kinds. As a bakery, Quoc Bao is ready to provide treats like gigantic muffins or soft, subtle, not-too-sweet coconut macaroons ($2.50 for a little tub of a dozen or so). 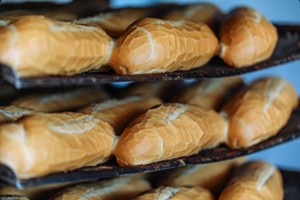 Quoc Bao is always full of 6-foot-tall racks with rows of freshly-baked baguettes, lined up perfectly straight from the ovens.
Kathy Tran
Saigon Deli offers a fuller dessert menu, plus tea, smoothies and other drinks, and it also has tables and chairs to sit and eat. The atmosphere at Saigon, with bright colors and bopping Vietnamese pop songs, is a stark contrast to the working bakery at Quoc Bao, which has no tables and only enough chairs for customers waiting on their takeout orders.

Why is it worth driving out to Garland to get a $3 sandwich? In the cases of both these restaurants, the answer is exceptionally fresh, crusty bread that has a character of its own, plus unusually generous, filling toppings. And, unlike many restaurants in Dallas proper, Quoc Bao and Saigon Deli treat banh mi not as one sandwich but as an entire genre. In other words, they’re about as close as Dallas gets to Vietnam.

But which one is better? In the end, it still comes down to that basic question of sandwich philosophy. Is a more diverse, more generous filling of meats and stronger contingent of hot peppers worth the more ordinary baguette? Or does the better loaf balance out the narrower choices of chicken and pork?