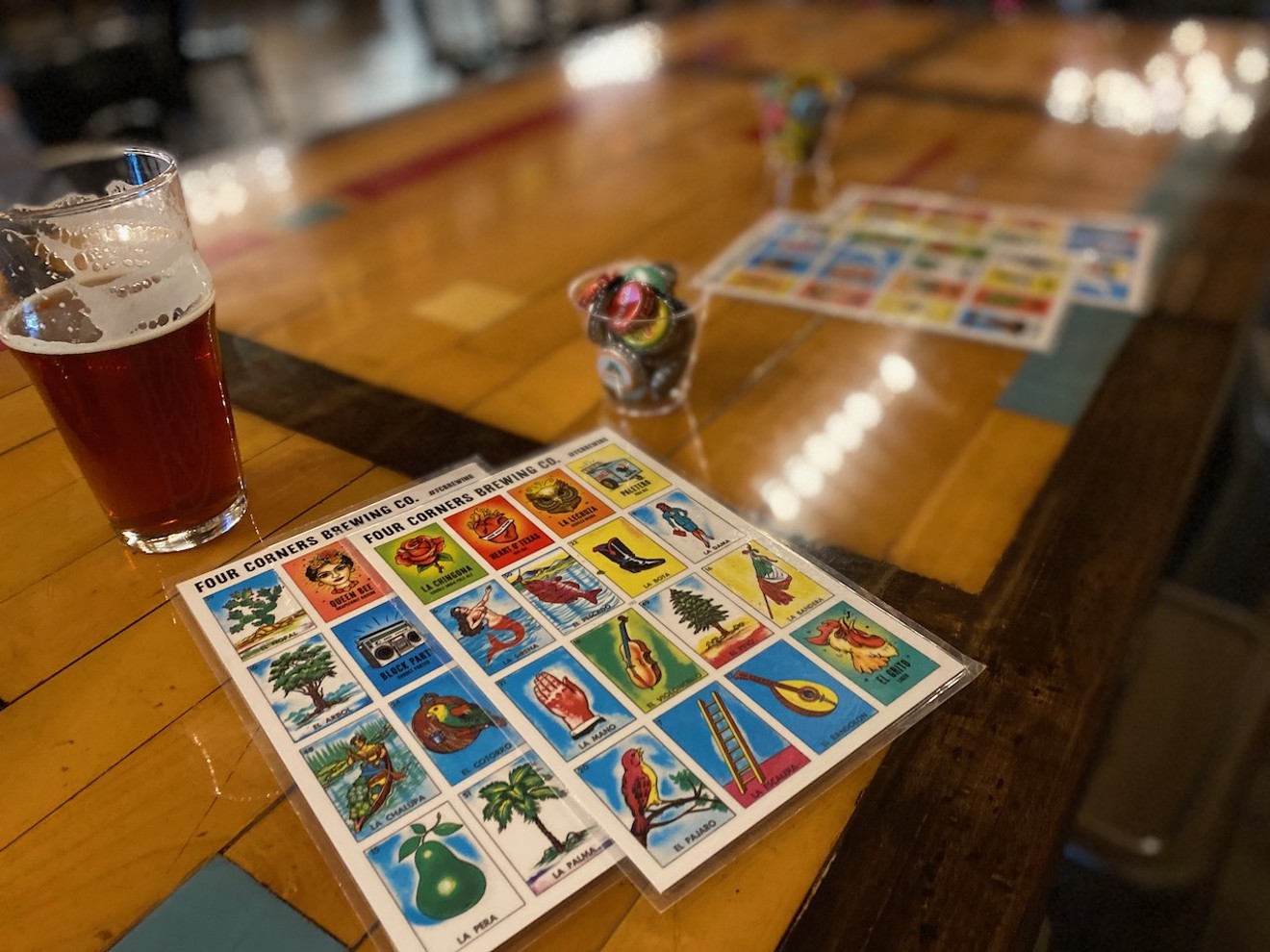 Four Corners hosts lotería on Thursday around 7 p.m. Lauren Drewes Daniels
When Four Corners started in the craft beer business in 2012, just a handful of breweries were operating in North Texas. Skip ahead 10 years, and now it's a thriving scene that weighs in with around 100 breweries, and Four Corners had a big hand in that.

Specifically, the founders tackled the city code as it applied to breweries in Dallas. Not very sexy, but certainly necessary.

"We literally opened the code," co-founder George Esquival said recently. "We spent some of our seed money that we could have bought an extra tank with to instead open the city code, to change the code, to define breweries for the city of Dallas. And that was a big bet early." 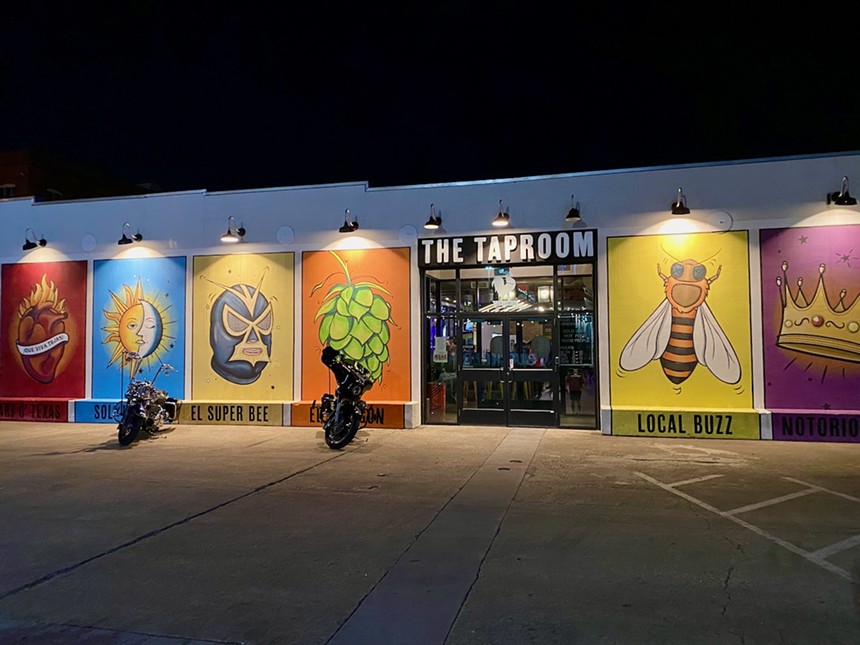 Four Corners taproom in The Cedars neighborhood.
Lauren Drewes Daniels
By big bet, he's referring to an early belief that Dallas should — and could — be a true craft beer city.

Esquival and his partner, co-founder Gregg Leftwich, took a gamble, hired a lawyer and went through several rounds with the city. Leftwich's signature is on the actual city code that allows brewing in Dallas. 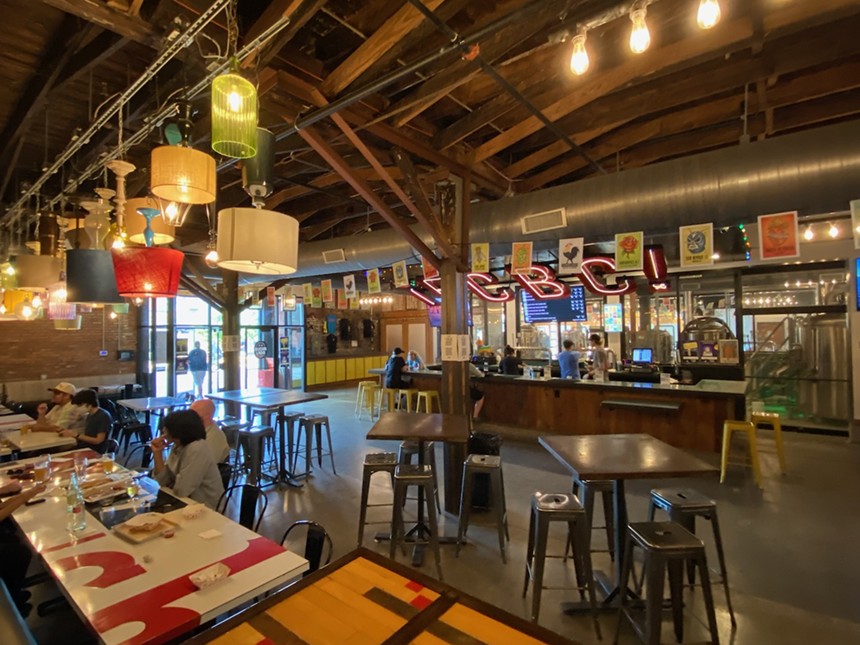 Did the gamble pay off? By the looks of things, tenfold. They grew out of their initial brewery in Trinty Groves and, in 2017, graduated to their current bigger space in The Cedars that has an 18,000-square-foot production facility and a 10,000-square-foot taproom along with a kitchen and large biergarten in the middle of it all. Four Corners' beers are found in stores, bars and restaurants throughout North Texas.

More important, they've built a community, which might be best demonstrated through lotería. 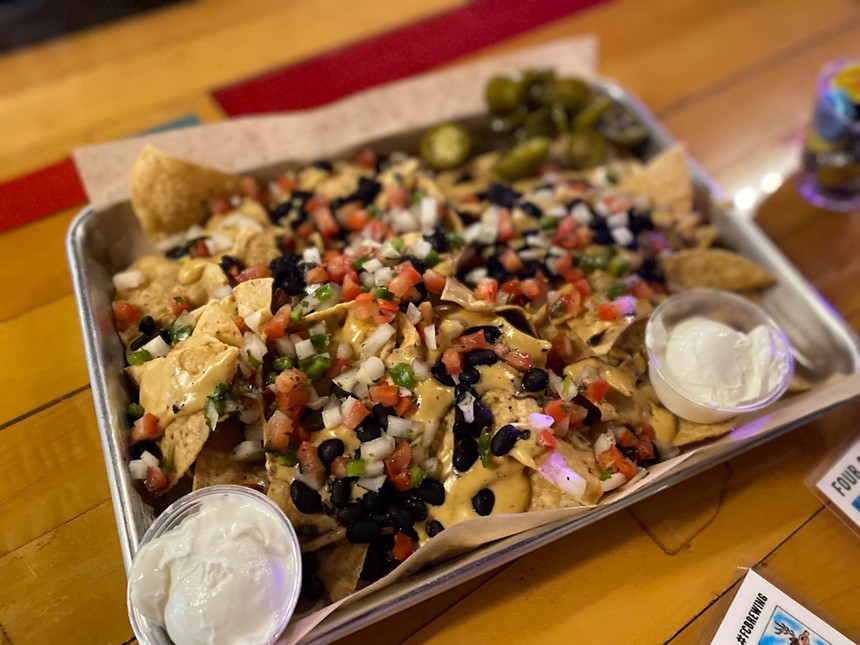 We got vegetarian nachos, but they also come with chicken.
Lauren Drewes Daniels
We recently headed over on a Thursday evening to play and, of course, have a few beers and some nachos. Lotería is a Mexican game much like bingo, except instead of playing with your grandma at the VFW at a table with overfilled ashtrays, it's a brewery with a much younger crowd, and the music and beer is way better.

Four Corners started hosting games in 2017, and they've garnered a devoted following since. Every table in the taproom was taken. Facebook says it starts at 7 p.m., but that's more like a suggestion or goal. The game actually gets going closer to 8 p.m. 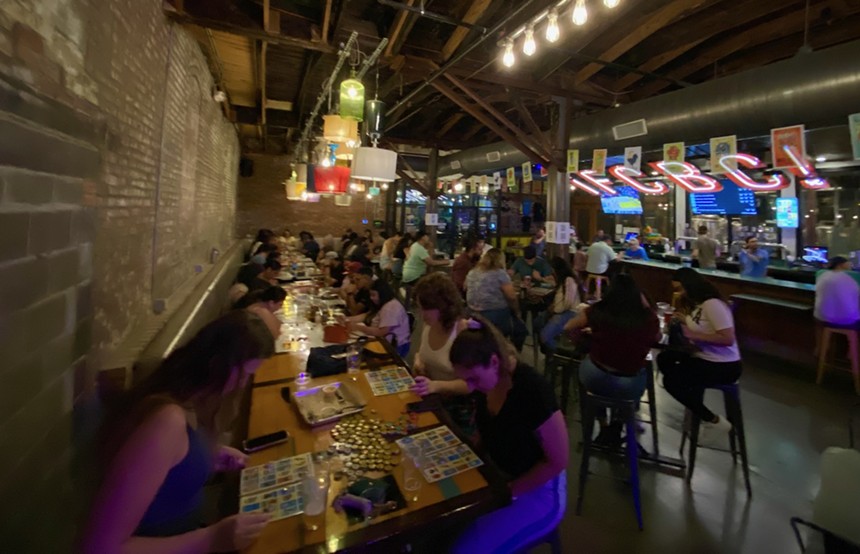 When the game is actually going, there's not a lot of chit-chat. It goes fast and you have to pay close attention.
Lauren Drewes Daniels
If you've never played before, it's pretty simple: grab a couple of lotería tablas, or cards (two at most), and a cup full of bottle caps. The emcee will explain the rules, which they make as they go. One game might require all four corners to win, the next may call for a horizontal or diagonal line. Guys at a table next to us who are regulars explained that traditional lotería requires the entire board to be covered, but just four squares allow the games to go faster.

The game moves fast once it starts. Squares are called in quickly, and you might have a hard time understanding at first, but it becomes easier as you become more familiar with your card and learn terms like paraguas (umbrella) and escalera (ladder). Photos and numbers help (sometimes). At times everyone yells out together (like when the ladder card is called for some reason) and for another card, everyone toasts.

They have swag bags for the winner of each game. We never won, so can't say what exactly the loot is, but it's along the lines of a T-shirt or koozie. For the final game, the prize was a large tin decorative lotería tabla.

To win you have to yell, "Lotería!" (never "Bingo!"). As the night goes along you'll need to be louder. The emcee checks prospective winning cards, if you actually do win (surprising how many people thought they had won, but didn't) you get booed walking back to your seat.

There are five-minute-ish breaks between games to grab another beer, catch up on the latest gossip or get tacos. It lasts just a couple of hours and makes for a fun Thursday evening.
KEEP THE DALLAS OBSERVER FREE... Since we started the Dallas Observer, it has been defined as the free, independent voice of Dallas, and we'd like to keep it that way. With local media under siege, it's more important than ever for us to rally support behind funding our local journalism. You can help by participating in our "I Support" program, allowing us to keep offering readers access to our incisive coverage of local news, food and culture with no paywalls.
Make a one-time donation today for as little as $1.