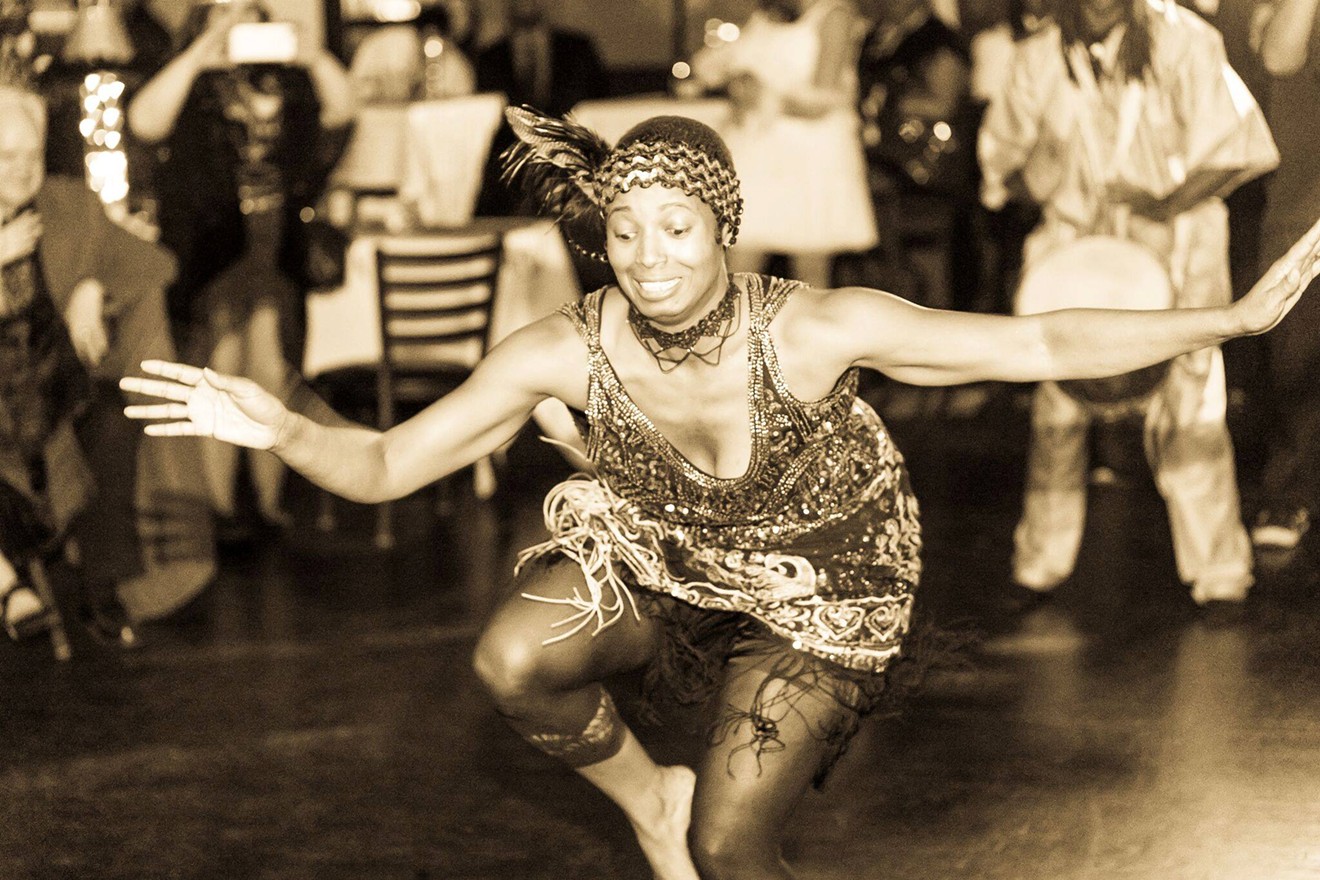 BeatStreet Live is a lively, weekly open mic by performance artist Verb Kulture. Steven Lee
Think of a night out when you’re not offered a show, but an experience — a place with earth-rumbling beats where audience members are encouraged to express themselves through music, spoken word and dance as the lines between performer and audience blur. Before the end of the night, not even the most reluctant observer can resist moving to the drums, bass and sax.

This is BeatStreet Live, the open mic brainchild of performance artist Verb Kulture, who came to Dallas from Chicago 13 years ago for a change and to bring her vision of her own self-expression to life.

Verb Kulture was the name of the organization for her poetry and spoken word events, but it soon stuck and became her identity. Now it is both her events organization and her performance name.

“Myself and a friend of mine were trying to figure out ways to do poetry and were trying to find a name to promote our poetry,” Kulture says. “People started seeing me and calling me Verb and that’s how I got branded as an artist.”

Kulture wanted to avoid halfway-interested crowds with no intention of participating and created a space filled with good energy, social interaction and a flexible structure of performance. It was then that she came up with BeatStreet to bring some of that Chicago arts flair to Dallas.

“Being able to bring that with dance, poetry, there’s rhythm,” Kulture says. “I wanted the b-boys, the breakdancers, drummers and everybody in the conversation happening. Part of the reason I do socially interactive events is that I believe that everybody should be part of the moment and create that moment together.”

Now in its sixth year, the event has been hosted by many Dallas venues, but is at The Free Man in Deep Ellum every Sunday evening. BeatStreet is for the artists — from the beginners to the world- touring, award-winning kind. The pressure of feeling obligated to perform every time is absent in this safe-space environment.

Kulture organizes the weekly event and acts as a one-woman show with her spoken word, singing and dancing, going with the flow of the music as it comes to her. She's also the frontwoman of the funk band Revolution and Funk Project, which she formed during the pandemic.

For Kulture, Revolution is a platform to provide commentary on societal issues and influence change. The band consists of seasoned artists who’ve won Grammys and toured with music legends.

"Part of the reason I do socially interactive events is that I believe that everybody should be part of the moment and create that moment together.” – Verb Kulture


“I did a lot of poetry with music and dance, lots of different art forms, but I wanted a band that was inspired by James Brown, Marvin Gaye, Curtis Mayfield and a lot of the artists that spoke out against things that's happening in the world, especially social justice,” she says. “I do like to be in a position to be able to bring awareness to things and do it in a manner that people are able to accept it, listen to it and just kind of do some self-reflection and self-evaluation on [their] part of the problem.”

Of course, this doesn’t overshadow the talent of other creatives who frequent BeatStreet, like professional dancer Daunte “Cheesy” Borner, who’s danced at BeatStreet for the past five years.

Borner likes the freedom to be unpredictable, yet meaningful, with his movements and to invite members from the audience to dance. If he catches you sitting, he’ll fix that.

“My purpose is not to intimidate but to invite,” Borner says. “I always remind the audience this is not Cinemark. Why are you sitting watching? We are inviting you past the fourth wall. Don’t watch us, join us.”

Bassist Jay McK, who met Kulture a few years ago, adds another dimension through the drums beating through the night. He found out about BeatStreet during a gig at the Green Elephant when he was asked by a fellow musician if he would play bass alongside the drummers.

“[The atmosphere] is very friendly, it’s open, it’s creative,” McK says. “It’s free, where you can be yourself.”

That version of yourself should be the best, however, the one that uses creative, clean language. BeatStreet Live redefines (and sanitizes) the open mic concept, and patrons don’t have to worry about covering the kids’ ears: Profanity and explicit content are not allowed at this family-friendly affair.

In these times, having a space like this for self-expression can be a life-changer as a judgment-free zone. For Kulture, making sure that’s possible is worth the stress as an organizer.

“I'm willing to put in the work with the people well at the end of the day to hear people saying they had a great time," Kulture says. “But I have a passion for what I’ve been doing with Verb Kulture, which is why I've been doing it for so long."
KEEP THE DALLAS OBSERVER FREE... Since we started the Dallas Observer, it has been defined as the free, independent voice of Dallas, and we'd like to keep it that way. With local media under siege, it's more important than ever for us to rally support behind funding our local journalism. You can help by participating in our "I Support" program, allowing us to keep offering readers access to our incisive coverage of local news, food and culture with no paywalls.
Make a one-time donation today for as little as $1.