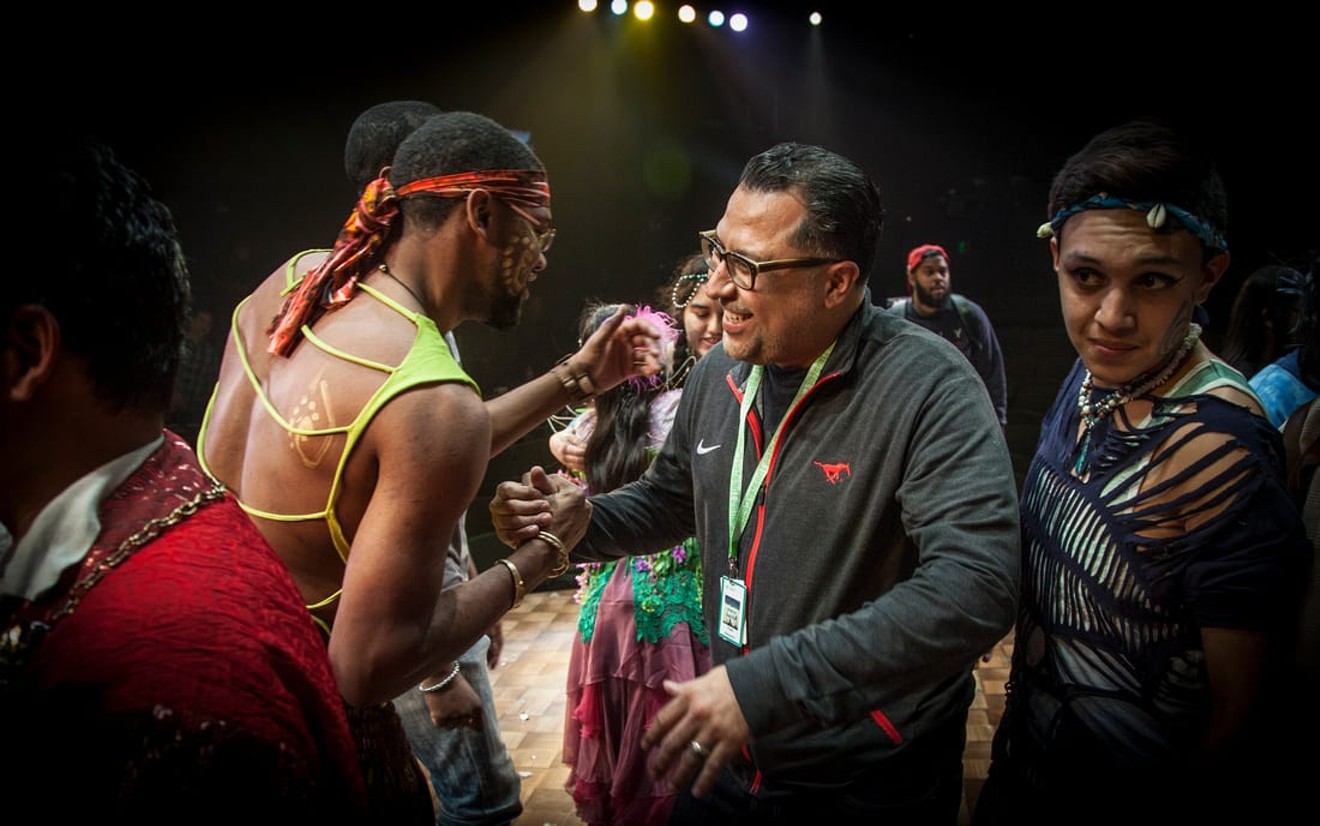 SMU's new program Ignite Arts, directed by Clyde Valentin, focuses on the artist's road taken, not the destination reached. Kim Leeson
Dissecting Clyde Valentin’s mind is much like looking at a city's map. There are divisions and crossroads and, mostly, the bridges that he wants to cross. He builds by day, charts unmapped territory and finds ways to see the city of Dallas through an unfiltered lens. His most steadfast effort of late is directing Ignite Arts, a Southern Methodist University program meant to meld art and communities together by making space for those who had none.

Valentin got his start in the arts in New York, through hip-hop. He grew up in Sunset Park, Brooklyn, where, at the time, gang violence filled the streets. Then, a change swept through the neighborhood and violence turned to dance and rhyme. The city became full of movement, color and words, often written on subway trains. “Not so much the tags, but the pieces, the elaborate, color-based graffiti pieces,” Valentin says, were free for young people like himself to learn from.

In high school, he became infatuated with Shakespeare, and by college he'd started producing performances of himself and his friends. “We weren’t formally attached to the (school’s) theater department, but it was important,” Valentin says.

Through this effort, Valentin and his friends brought in students of all backgrounds, eager to see shows about people who looked like them, as opposed to the more “professional” theater department, where that similitude was scarce. That experience, mixed with William Upski Wimsatt’s 1994 radical culture critique Bomb the Suburbs, opened doors for Valentin regarding what was possible within the boundaries of the arts, and propelled him to pursue his own progressive projects, like the conception — in partnership with a collection of other free-thinking, raised-on-hip-hop creatives — of the 1990s' Stress Magazine.

“That was the beginning for me — the beginning to the power of storytelling,” Valentin says. Culture, fashion and photography combined with business and economics forced Valentin into a different sort of education. He learned how to produce, organize and stay abreast both culturally and politically on the fly, preparing him for his next endeavor: the internationally renowned Hip Hop Theater Festival.

“It was about creating space for other people and us, along the ethos of hip-hop,” he says of the project. “We weren’t necessarily interested in owning anything. It was more about, ‘Can we create a platform for you to get to that next place.’” Considering the careers of festival alumni Lin-Manuel Miranda, Dominique Morrisean, Kamilah Forbes and Chadwick Boseman, the festival achieved its goal. “The hip-hop generation was almost a precursor to 21st-century culture,” Valentin says. “We practiced a level of inclusivity across culture and race that I think the generation today operates almost intrinsically.”

“We always want to recognize and begin to train the folks around us to think plurally.” — Clyde Valentin

In 2014, Valentin founded Ignite Arts within the Meadows School at SMU. The program's mission, in Valentin’s words, is “to ignite the imaginations of our students and citizens to imagine more just and vibrant communities, through making, complimenting and creating exceptional experiences.”

The way the initiative achieves this is by focusing on the practice, specifically, the process of creation as opposed to the end product. In its early years, Ignite Arts “blurred the lines between professional artists and Dallas community members” with Public Works Dallas, a yearly theater performance enacted by non-actor members of the community. It also awarded grants to young artists of color looking to start movements.

Valentin was tasked with the direction of the program almost immediately after the university's previous dean —who’d originally hired him for the job — left the school. A restructuring of administration changed his outlook on the program. Fresh out of New York, he found a challenge and opportunity to apply what he’d learned in a completely different context.

Now, Ignite Arts is placing arts and culture at the center of city and social infrastructure through the San Francisco-based Culture Bank. The objective of the initiative is to find ways to work with local artists who understand cities intimately and draw upon the power of creativity to shift a landscape’s narrative.

They’ve also assembled a cohort of artists — five female, one male — to “co-learn” with SMU Meadows students and faculty. The artists range from visual to culinary, and their goal is to focus on the road taken, rather than the destination reached. “They all speak to larger levels of the environment and community development. It’s about helping us continue and advance the conversation,” Valentin says.

Ignite has a few commissioned projects in the works. One is a play by Janielle Kastner and Brigham Mosley, about journalism and its “existential threats.” Another is a cross-country collaboration between the Pangea and Sipp Culture theaters, on a performance about the metaphor that exists within a river — the Mississippi River being the only true binding characteristic shared between the theater companies. Finally, Ignite is planning a conversation between arts integration leaders and progressive theologians to discuss the intersection of arts and religion — yet another bridge to be crossed.

The overarching idea within Ignite is to break down the barriers between each of Dallas’ communities. “We’ve always pluralized ‘communities,’” Valentin says. “We always want to recognize and begin to train the folks around us to think plurally.”

Valentin wants art districts in every community, in addition to the hub downtown, with arts education and public transportation connecting the dots between the likes of Highland Park all the way to South Dallas. In a city where physical concrete lines seem to create vivid cultural divides, plurality makes sense for Valentin. He believes the individuality within each community is what sets cities apart. He comes back to the idea of doing the work, socially and physically, in order to make way for the two main functions of Ignite: education and growth.

“We have to create the conditions and opportunities,” says Valentin. “We can provide guidance, and that, then, becomes an education within itself.”
KEEP THE DALLAS OBSERVER FREE... Since we started the Dallas Observer, it has been defined as the free, independent voice of Dallas, and we'd like to keep it that way. With local media under siege, it's more important than ever for us to rally support behind funding our local journalism. You can help by participating in our "I Support" program, allowing us to keep offering readers access to our incisive coverage of local news, food and culture with no paywalls.
Make a one-time donation today for as little as $1.