Texas Police Chief With One Wife, Two Fiancées and a Girlfriend Arrested by Texas Rangers 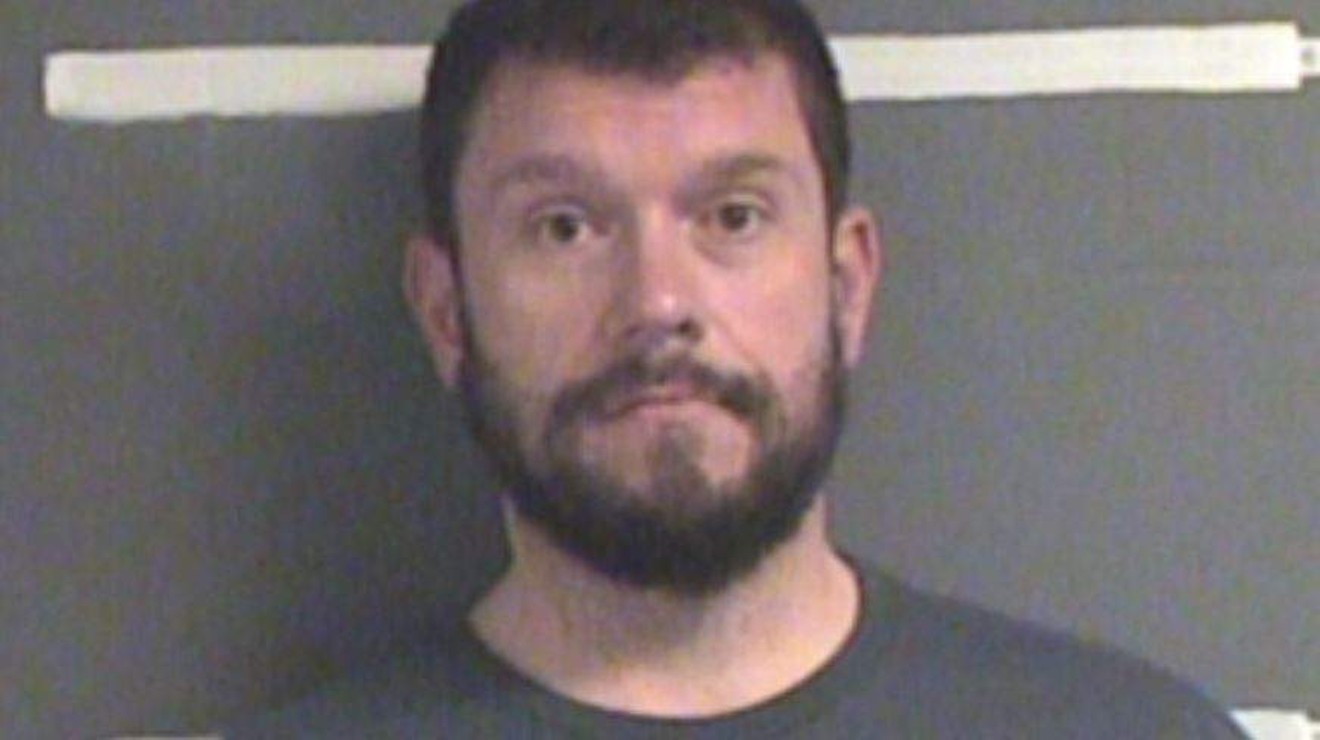 Former police chief Jason Collier was arrested Thursday on charges of forging government documents to show one of his fiancées that he was no longer married. Hutchinson County Sheriff's Department
Some men have trouble committing. Jason Collier is not one of them. In fact, he loves commitment so much that he has a wife, two fiancées and, allegedly, one girlfriend.

At this point, it seems, the whole world has heard of three-timing (maybe four-timing) police chief Jason Collier from a Texas Panhandle town called Stinnett, whose excessively generous love life blew up in his face — and everyone else’s feed — in an epic made-for-Facebook drama.

Stinnett is a small town in Hutchinson County with less than 2,000 residents 60 miles northeast of Amarillo. Collier ventured far out of his town, courting and getting betrothed to women in different cities and states.

The story goes that Collier is married to a woman named Opal, with whom he raised his two children and two step-children. In November, he proposed to his girlfriend, Cecily Steinmetz from Amarillo. And, one month later, he proposed to a Kansas woman named Kristi Shaffer, according to statements from the women made on social media and to local reporters.

The women believed they each were in a monogamous relationship until his love quadrangle was found out, of course, on Facebook.

Collier ran the Stinnett Police Department’s Facebook page (which now appears to be shut down); one of his fiancées, Shaffer, left some comments on the page. One of Steinmetz’s friends saw Shaffer’s comments and noticed Collier in her profile picture. She creeped Shaffer’s profile and discovered Shaffer was also engaged to her friend’s fiancé. 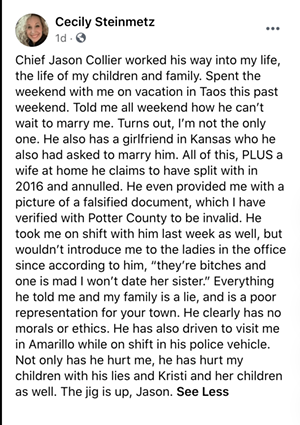 Cecily Steinmetz posted about her relationship with Jason Collier.
Screenshot from Facebook
Steinmetz made a public post on her own page relaying the ways she’d been duped by Collier.

“Chief Jason Collier made his way into my life, the life of my children and family,” the post reads. “... Turns out, I’m not the only one. He also has a girlfriend in Kansas who he also had asked to marry him. All of this, PLUS a wife at home he claims to have split with in 2016 and annulled.”

Shaffer replied to Steinmetz and the two compared stories and screenshots while uncovering Collier’s discrepancies in his communication with both women. Collier, according to the women’s exchange, habitually lied about his whereabouts and details of his life, like having a disabled brother, a side job where he policed out-of-town events such as protests and a gunshot injury sustained in the line of duty.

One of the things we learned through the post is that the old-fashioned Collier, an ordained minister, wanted to make honest women out of his girlfriends by asking all their fathers for their daughters’ hands before proposing.

Their entire exchange unfolded in front of a virtual audience, and Collier’s story made international headlines.

One of the biggest accusations from Steinmetz was that Collier sent her a document (a photo of which she posted online) appearing to be a marriage annulment between Collier and OG wife Opal.

At first, Collier was reportedly placed on administrative leave.

On Tuesday, Texas Department of Public Safety Sgt. Cindy Barkley said that the Hutchinson County District Attorney had asked the Texas Rangers to conduct an investigation about Collier's alleged forgery of government records.
click to enlarge

A photo of a document posted by Steinmetz, which she says she received from Collier.
Screenshot from Facebook

“Collier allegedly sent a text message to the victim with a fraudulent government record attached. The document was a fraudulent marriage annulment,” Barkley said.

On the same day, Collier was arrested by the Texas Rangers, charged with tampering with a government document with the intent to defraud, a state felony, with a bail set at $10,000, Barkley said.

“So, I’m one of his girls, apparently,” Berry Carter wrote on Facebook. “We started talking about a month ago. He came to see me in Abilene the weekend of the 15th. Said he was on assignment last weekend in Oregon.”

Three days ago, Steinmetz commented on her own profile photo, where she’s seen smiling with Collier: “Oh hey ... might want to make sure mutual friends don’t know your WIFE.” Since then, her photo has been shared 93,000 times.

Steinmetz later shared a video she received from Collier where he called himself "the biggest piece of shit."

Collier's entanglements have prompted mass curiosity online. Forget the Gamestop stock investors, and let us seek Collier’s financial advice — how does a small-town cop with children to feed manage to afford this kind of travel time, not to mention engagement rings?

The internet is of course having its fun at Collier's expense. Steinmetz has begun posting updates to a Facebook group called Jason Collier Netflix Series where users suggest actors such as Dane Cook play Collier in a TV show.
KEEP THE DALLAS OBSERVER FREE... Since we started the Dallas Observer, it has been defined as the free, independent voice of Dallas, and we'd like to keep it that way. With local media under siege, it's more important than ever for us to rally support behind funding our local journalism. You can help by participating in our "I Support" program, allowing us to keep offering readers access to our incisive coverage of local news, food and culture with no paywalls.
Make a one-time donation today for as little as $1.