The Mavericks ManiAACs Started as a Joke, Now They're the Backbone of AAC's Spirit 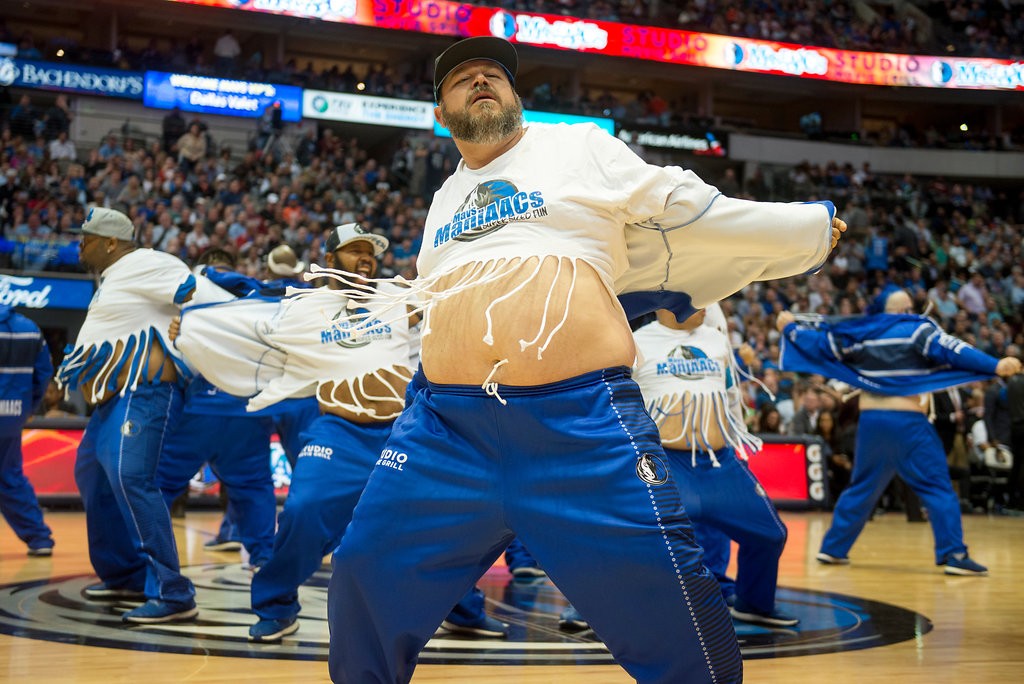 Brian Maschino
The Dallas Mavericks' ManiAACs have been around for 16 years as the male cheerleaders the NBA needs.
Performance night for the Mavericks ManiAACs, the all-male dance team that has spent the last 16 years shaking their exposed guts for adoring crowds at American Airlines Center, starts long before the ref throws the opening jumpball.

At last Wednesday's game against the Oklahoma City Thunder, the ManiAACS' duties began as soon as they passed through the press entrance's metal detector. Fans of all ages and genders who recognize the dance team with their wide frames, personalized bling and outlandish uniforms came up to them to ask for autographs, take pictures or just talk about the team.

Rob "Big Rob" Maiden, the team's captain and one of the team's founding dancers, wasn't more than 10 feet away from the arena door before a group of kids recognized him and pulled him into their debate. "Who's better?" one of the kids asked. "Lebron or Kobe?" Maiden, who's decked out in a ManiAACs jumpsuit with an iPad Mini playing videos of the team hanging from a gold necklace, gives props to both NBA legends.

A few more team members showed up and before they could even pass through a second door just a few feet away, they'd high-fived, taken pictures with or gotten in conversations with five groups of fans. The interactions didn't stop at the door with the "Staff Only" sign. The AAC's behind-the-scenes staff react the same way: a friendly greeting, big smiles on their faces and even a few phones for selfies and group photos.

Having to stop every 20 feet to interact with someone just to get to the locker room sounds like an inconvenience, but team member Clay "Westy" Westmoreland says this is why they put everything they've got on the court each night. There is no better way to psych the team up before a big show than knowing they've got an arena full of fans who adore them as much as they adore their home team.

"The interaction with the crowd is one of the things we enjoy the most," he says. "We love fans coming up to us asking to take pictures and asking for posters with our autographs on it. We're all Mavs fans, and we love the team and watching the team and getting to know the team, but we know we love the fans the most. The fans are why we're here." 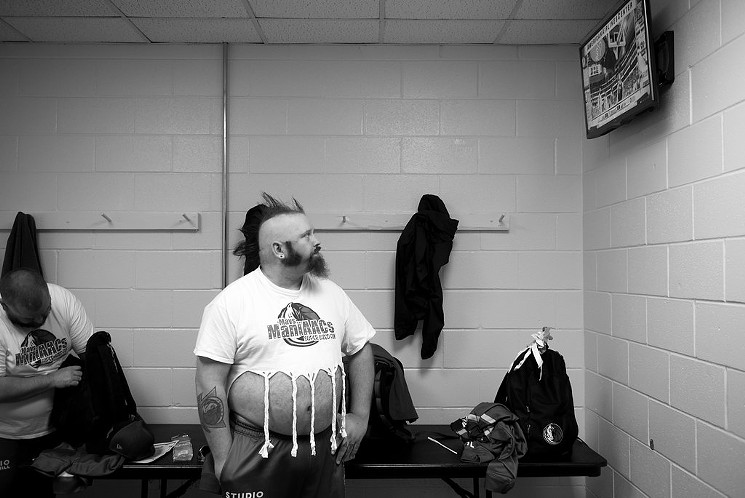 The Mavericks ManiAACs are almost as old as the arena embedded in their team name. Shortly after Mavericks owner Mark Cuban purchased the team from previous owner Ross Perot Jr. and moved into their current home, the team held open auditions for male dancers to perform during a playoff game in 2002. The team of uniquely shaped male dancers shaking their booties to high energy dance music and sexy slow jams in shredded, cut-off shirts was supposed to be a one-time joke to keep the crowd's spirits high late in the game. Instead, the ManiAACs became the first all-male dance team in the history of the National Basketball Association. Sixteen years later, they are still shaking their tailfeathers at every home game.

The ManiAACs are an integral part of Mavs' fandom, with live appearances and performances throughout the city and even on the national league level with four appearances during the NBA All-Star game. The most recent included post-performance congratulations from Queen Latifah and Fergie and even a TMZ Sports reporter who caught them arriving at the airport.

"We left just thinking it was all over, and we got a phone call and letters asking if we would consider coming back for a season because it was such a hit," Maiden says about the team's beginnings. "We were all just elated, and from there, we just ran with it. We decided let's put crystals on these shirts. Let's come up with chants and be the rowdiest college atmosphere group you'll ever see at a professional game. Let's make the Mavericks think they can't live without us."

"Our goal is to make it look like it's just fun," Davis says, "but there is a lot of work that goes into having fun."

Davis took over dance design duties for the ManiAACs when the team's original choreographer Stella Sattler, who also coached the Dallas Mavericks Dancers, retired in 2010. The ManiAACs take up space in the team's other practice court in the arena to run their routine. Using a regulation court gives Davis an ideal space to keep his dancers in order and help them nail down their steps through a series of over-the-top, dance floor classics like the Leash, the Bus Stop and a team-synced Arm Wave.

The dance mix that drives their moves contains samples from club tunes like Flo Rida and Sage the Gemini's "Goin' Down for Real" and classics like Marvin Gaye's "Let's Get It On," the latter of which provides the "blowout" moment when the dancers' rip off their sweat jackets and let their flabby bellies fly.

"It started out with a dance song they can really dance to and the last song is what brings it home, where we can mix in a lot of dance and comedy," Davis says. "I can hear a song and say I want to build something around that. I can see something on the court and see how it's funny and how can I build everything around that. It's really just me living my everyday life and hearing a song and wondering how can I make that into a dance."

The second-half dance isn't the only item on the team's to-do list. The dance team had a tightly packed schedule surrounding their big dance. They also greeted a group of kids from the Forerunner Mentoring Program in Lake Highlands who got to go to last Wednesday's game. Then they met the Mavericks on the "High Five Line" with the fans who greet them as they enter the court so the ManiAACs can bless each player with their own chant. Then the dance team splits off into two groups. One goes to "The Stage" overlooking the lowest west side of the arena where the dancers spend most their time; a second smaller group leaves to do a T-shirt toss and fan greet during the first quarter. The only time any of them get to take a seat is during halftime. 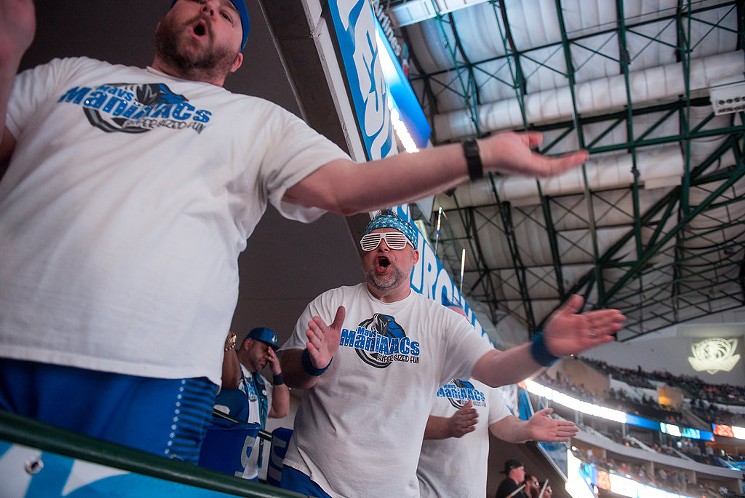 "You kind of get used to it," says Thomas "Pharoah" Ghetubah, a dancer who wears an Egyptian pharaoh hood in tribute to a nickname he picked up from his college fraternity. "What it boils down to is if you think about it, then it becomes an issue. It's a job we do, but none of us look at it as a job. If you have that love and that passion for it and you're up there having fun and being entertaining, your legs won't get tired and you won't need to sit down."

The dancers tag each other into the main stage line after each quarter where they chant and cheer for the Mavs and react to the game's key moments. Maiden says the team has an arsenal of around 25 memorized chants for everything from celebrations for Mavs' three-pointers to taunts during their opponent's free throws.

"If any guy had a unique sound to his name, we would come up with these chants so the crowd would get our attention," Maiden says. "[Former Dallas Maverick] Devin Harris, who was a young guy back then, one guy said, 'He got embarrassed by Devin Harris!' We were like that's an awesome chant. We're going to say that every time."

The players also have their own signature dances they can call for the team. Julio "Don Julio" Magana yells "Don Julio style!" and the team performs a coordinated move as if they are suffering from what appears to be a painful bout of kidney stones.

"One time during a free throw [last year], I got a cramp and was holding my side," Don Julio says. "So they all started pretending to hold their sides and yell out in pain."

At the halftime buzzer the team headed down to their two-room locker room to prep for their big performance. The cheers follow them all the way down to the locker room despite the fact that the Mavs are going into the third quarter with a 9-point deficit. They do one more run-through of their routine in front of their locker room and nearly everyone passing by stopped to watch or record it on smartphones. 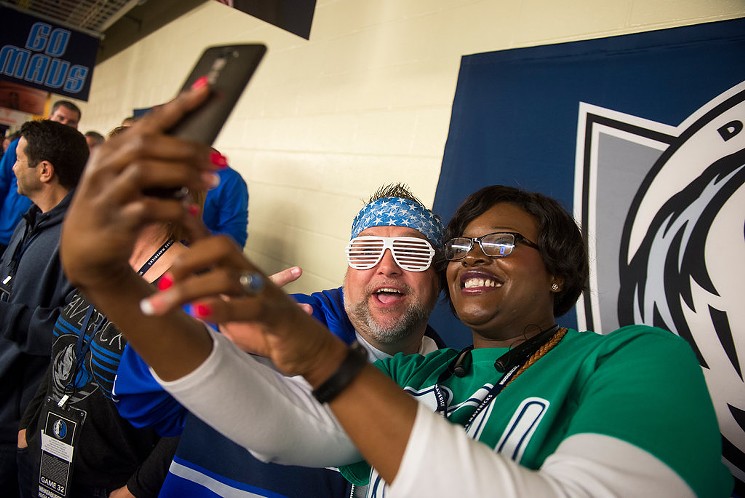 "I just think they're hilarious," says McKenzie Shay, a high school senior who went to the game with her friend Jack Adams and caught their pre-performance rehearsal while grabbing a soda from the vending machine. "They're fun, they have a lot of energy and a lot of camaraderie."

Dancer Zac "Pro Zac" Elliott says the friendships he's made is one of the team's biggest perks.

"We're a big brotherhood," Elliott says. "Most anytime if I need something, I can call just about any one of them and they'll be there for me for whatever I need."

Knowing the guy who's holding your imaginary leash also has your back is also part of the ManiAACs successful formula, Jacob says.

The ManiAACs finally headed out to the court to perform the routine they've been learning for three weeks. One of them notices that former Dallas Cowboys quarterback Troy Aikman is sitting two rows from the sideline but it doesn't throw them. Pope Francis I could be sitting in the front row and the team would still run out and throw everything they are carrying with them onto the court.

The announcer intros them and the crowd gets louder as the team starts their dance. The noise crescendos and stays there at the "blowout" moment. The arena turns into a noisy cloud of high pitched screams, cheers and collective laughter.

"When they see us do it for the first time, it's just an adrenaline rush and we're proving to people that the stereotype that a big guy can't dance or a white guy can't dance," Elliott says. "Being able to bust that stereotype is a big part of it. The adrenaline part erases that part of your brain that says all the negatives of 'No, you can't do this' or 'You can't do that because you're too big.'"

The game ends with a disappointing one-point loss for the Mavericks thanks to a clinching three-point shot by the Thunder's Russell Westbrook, but it doesn't affect the dancers' spirit or the fans as they encounter them on their way out of the arena. The team stays well after the game to make sure everyone leaves the place with a smile.

"We just found the perfect niche," Maiden says. "Because we're bigger guys, the guys are not upset seeing us because we don't have six packs and the ladies scream for us. We've got men out here dancing and they can hoop and holler and the kids can laugh at us. You literally get love from all three groups. I got that feeling from that first dance, and we've never wanted it to go away."