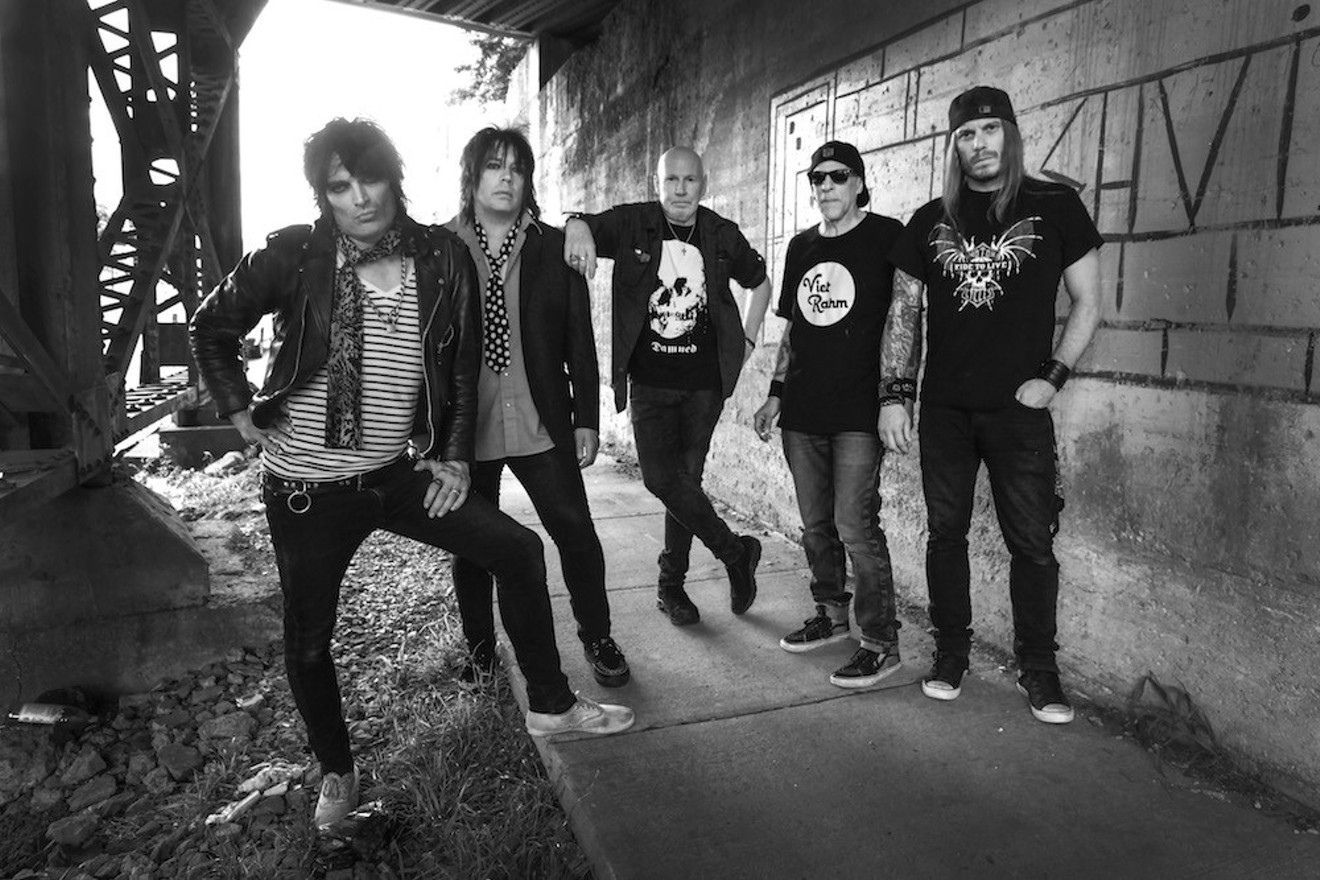 See Dead Boys at Three Links. Jeff Fasano
In October 1977, Dead Boys released Young Loud and Snotty, which peaked at 189 on the Billboard 200 and shaped the direction and sound of American punk.

“It was a dangerous scene, and we partied pretty dangerously,” remembers Cheetah Chrome, guitarist for the legendary punk band, which makes a stop in Dallas this Saturday at Three Links.

Originating in the New York punk club CBGB’s next to the likes of Blondie, Ramones and Talking Heads, Dead Boys were notorious for playing some of the wildest, most violent shows of their time. While other bands from that time and place have become household names, Dead Boys remain underground icons for those who take punk seriously.

Now heralded as one of the greatest punk albums by those who really know and respect the genre, Young Loud and Snotty has been rerecorded with a new lineup and brought back as Still Snotty: Young, Loud and Snotty at 40.

The group took brief break in the tour for Chrome to recover from kidney stones and back problems, but the guitarist says he is “feeling better now after seeing some new doctors” and is ready to get back in front of audiences.

The crowds have been enthusiastic, and “the lineup is as good as the old band used to be,” he says.

By all accounts, Hout’s performances pay homage to the band’s original singer, Stiv Bators, who died after being struck by a taxi in Paris in 1990. Hout earned his position in the new Dead Boys lineup after playing in a Dead Boys tribute band called the Undead Boys. Chrome thought he sounded enough like Bators to fit the group but kept enough of an original stage presence to keep it interesting.

“Jake is a great lyricist,” Chrome says. “We’re still planning and writing new Dead Boys material, and we plan to start recording at the end of the year or early next year. … We’ve already got a lot of material picked out.”

Until then, the band will tour mostly Southern states before Chrome takes some time off in October to play some shows with Señor No in Spain.

Chrome is looking forward to Saturday night’s show and excited to be returning to Dallas.

“I like Dallas,” he says. “It’s a good town, and I’ve got some friends that live there. The past few shows I’ve played there have been good. There are a couple bars there I really like. I can’t remember the name of this one, but it’s around the corner from Curtain Club and it has Guinness on tap.”


"There are a couple bars there I really like. I can’t remember the name this one, but it’s around the corner from Curtain Club and it has Guinness on tap.” – Cheetah Chrome

He laughs as he tries to remember the name, but admits, “Whenever I’m there, I’m not driving, so I’m just following people around.”

Chrome says he is “glad to see [Deep Ellum] coming out of its slump” and he’s looking forward to playing at Three Links with Dallas punk bands Drawer Devils and American Shit Storm.

Although Dead Boys is playing with other punk bands, Chrome says he doesn't think there is a punk scene today.

"I'm just an old guy who doesn’t know anything,” Chrome clarifies. “I like to see all of the bands who are still out there doing it, but I wish some would get more attention. I’m waiting to see someone shake things up again. It doesn’t feel dangerous anymore, and the kids just don’t seem to have the energy that they used to. Maybe it’s just not possible anymore. Kids are in a bad spot. You have to put in the effort [because] there’s no money in records anymore.

“DIY costs money, and it costs a lot, but it needs to be done.”

After 40 years in the punk scene, Chrome says that what keeps him going in spite of all the challenges facing young and old punks alike is that he loves playing and being on the road.

Dead Boys play at 9 p.m. Saturday at Three Links. Tickets start at $12.
KEEP THE DALLAS OBSERVER FREE... Since we started the Dallas Observer, it has been defined as the free, independent voice of Dallas, and we'd like to keep it that way. With local media under siege, it's more important than ever for us to rally support behind funding our local journalism. You can help by participating in our "I Support" program, allowing us to keep offering readers access to our incisive coverage of local news, food and culture with no paywalls.
Make a one-time donation today for as little as $1.