Stay Crafty, Dallas: Our Thirst for Local Beer Continues More Than a Decade into the Craft Brewery Boom

Community Beer Co. recently moved into a new 70,000-square-foot brewery. Nathan Hunsinger
Strong gusts whipped through Community Beer Co.’s large biergarten just northwest of downtown Dallas on an overcast Saturday afternoon in April. A glass of beer toppled off a table and bounced on a bench before breaking. Throughout the multilevel indoor and outdoor brewery, friends, coworkers, dates, toddlers, strollers and countless varieties of doodle dogs gathered around tables.

Two food trucks sat nearby, and a delivery driver dropped off a stack of pizza boxes to one of at least three birthday parties being held, all for adults. A few games of cornhole were getting serious; in one, a 2-year-old was dropping bags straight into the hole. Cheater.

All of it was washed down with one of 24 Community beers pouring through the taps, made on site.

This February, Community moved from a 14,000-square-foot warehouse in the Design District to this new stand-alone sprawling two-story behemoth that is five times bigger than the original brewery. They were outgrowing their original space before the pandemic hit and switched to a production-only space for most of 2020 and 2021. With this new location, they’re back and bigger than ever, a flagship example of Dallas’ craft beer culture. 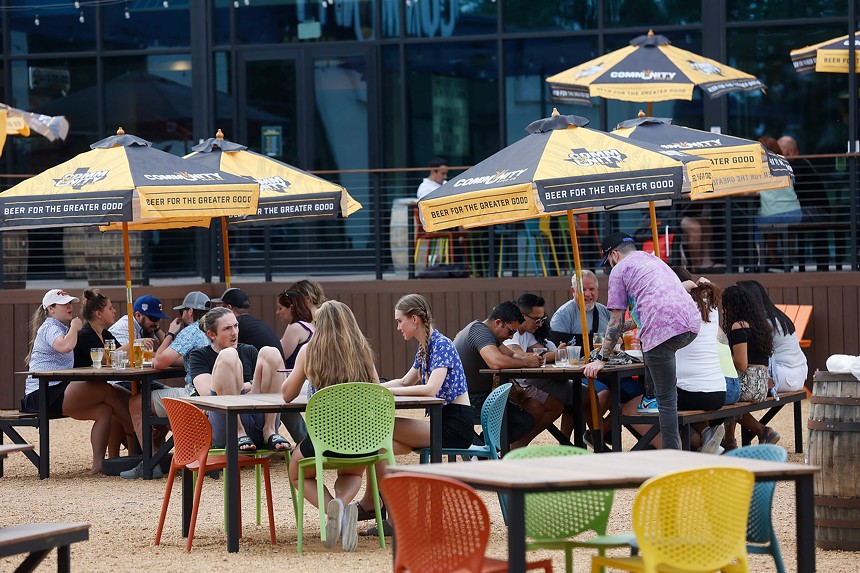 Community Beer Co.'s massive courtyard is a destination for craft beer enthusiasts and their families.
Nathan Hunsinger
On that same windy day, just a couple of miles east, a sporty group wearing tight shorts and tank tops gathered in a field across from Celestial Beerworks. It was the brewery's 2nd Annual Field Day, when jocks, nerds and everyone in between relived the best day of each year in elementary school. Inside the taproom, others loaded up on four-packs or sipped draft beer that was made just feet away. Celestial is also working on a “satellite” that will allow them to increase production and distribution while freeing up “space” at this ground control facility.

Ten years ago, events like these weren’t allowed at local breweries. Laws that favored mega producers stifled any craft beer buzz Dallasites hoped to get. Before 2010, Rahr and Sons Brewing Co. in Fort Worth and Franconia Brewing Co. in McKinney were the only craft breweries in North Texas.

In 2011, when Peticolas Brewing and Deep Ellum Brewing Co. opened, they were only allowed to give samples to visitors who paid for a tour. (Remember sample cards?) They couldn’t serve a pint. Nor could they sell cans from their own brewery to take home. Instead, they had to sign a contract with a distributor and land space on a retail shelf.

Meanwhile, the city of Dallas was trying to rein in the blossoming industry as brewers tried to explain to code inspectors that they didn’t need grease traps or ice machines. Micheal Peticolas had to get approval from both the City Plan Commission and City Council before he could start production.

Peticolas says he had some city staff come to the brewery one day to give them a tour of what a production brewery entails. It wasn’t until 2012 that the City Council officially allowed breweries to operate within the city limits. Then, in 2013, legislation passed that allowed taprooms to open.

According to the Brewers Association, in 2014 there were 117 craft breweries in Texas with an economic impact of $3.7 billion; in 2019 those numbers had grown to 341 breweries and $5.4 billion. Impact per capita across the state has risen from $205 to $270 over that five-year span. After a pandemic slump, breweries are almost back to those 2019 numbers.

By 2021, the number of breweries jumped to 406, with North Texas accounting for about a quarter of the total.

After years of wrestling for updated state legislation, the craft beer industry scored some wins that allowed them to sell beer in their breweries (2013) and beer-to-go (2019). That has led to biergartens full of locals drinking local beers. Additionally, craft beers line the coolers at stores, and it’s no longer unusual for a bar to have local options on tap. Today, the question isn't, “Do you have anything local?” but rather “Which local beers do you have?”

Breweries are finding ways to thrive by creating community spaces, offering unique experiences and food along with craft beer to build loyalty to a place as much as a particular beer. While some question the strategy of pandering to Dallas’ fickle palate and valuing engagement and experience, it appears there’s room for everyone at the tap. 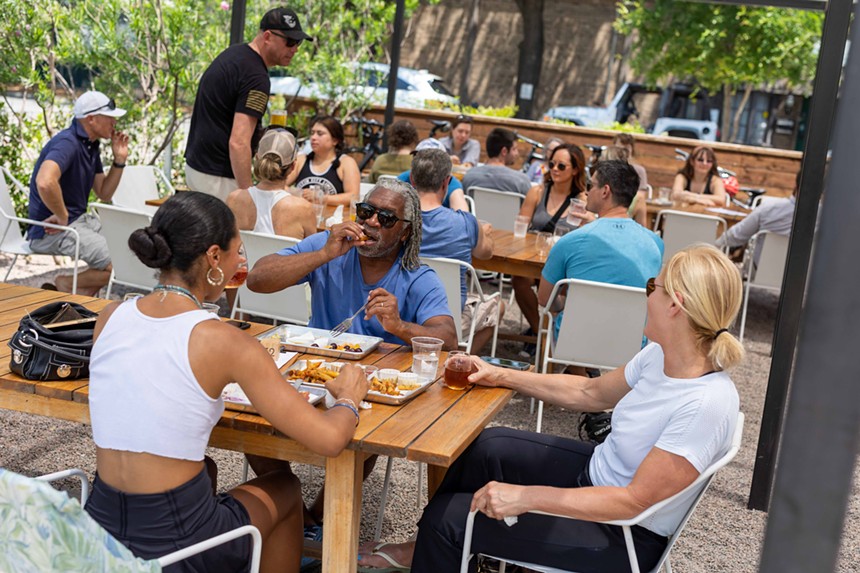 Manhattan Project Beer Co.'s courtyard in West Dallas
Nathan Hunsinger
Perhaps you remember the first time you sipped a Blood and Honey from Revolver Brewing Co. Or maybe your ah-ha craft beer moment came with a glass of Velvet Hammer. At the beginning of the local craft boom, there were gateway beers leading a goodwill campaign, charming anyone who would imbibe.

As the beer industry has grown across the state, with some 90 breweries across North Texas alone, new beers are tapped weekly. It’s a busy field, and there’s a need to stay relevant and stand out.

Is that good or bad for craft beer? The answer depends on whom you ask.

“What’s hip today might be nothing tomorrow,” says Dennis Wehrmann, who founded Franconia Brewing Co. in McKinney in 2008 but has since sold his stake in that company and now keeps himself busy brewing at Beard Science Sour House at The Truck Yard in The Colony.

Wehrmann thinks the evolution of the craft beer scene over the past 10 years is good but worries that breweries are missing a chance to establish their own brand by trying to keep up with fads.

“The customers couldn’t make a decision. Now there’s this place, maybe we need to go over there. There’s another new brewery, now let’s try this one out. None of these breweries had a chance to establish their brewery and brand. They didn’t have a chance to establish customer loyalty,” Wehrmann says.

With monthly and sometimes weekly new beers, Wehrmann says, overproduction of beer styles got out of control. “Crazy stuff happened," he says. "If you look around in the market today, what is considered beer, it’s not actually beer anymore. It’s fermented water with carbonation in it and called seltzer."

Brian Brown runs a website BeerinBigD.com, which documents the craft beer scene in North Texas. Brown agrees that drinkers are “always in search of the shiny new penny.”

“Brand loyalty is fleeting with some favoring whoever stays on top of the latest trends. Plus, demand calls for a steady flow of new releases,” Brown says. “You're doing it wrong if you focus on classic styles brewed year-round. It's unfortunate, because it feels like the timing of these factors has hindered the area's ability to develop into a nationally recognized craft beer destination.”

At Celestial Beerworks, a steady flow of new beers is part of their identity. In addition to field day, science fair projects, space and art (and all of those mixed together), part of the experience they offer is a continually fresh menu beer.

Peticolas is more optimistic and compares the growth over the past decade to ships that rise together at high tide.

“Dallas has a beer identity now,” Peticolas says. “And the quality of beer we have here is really, really good. We have some breweries that are making outstanding beers.” 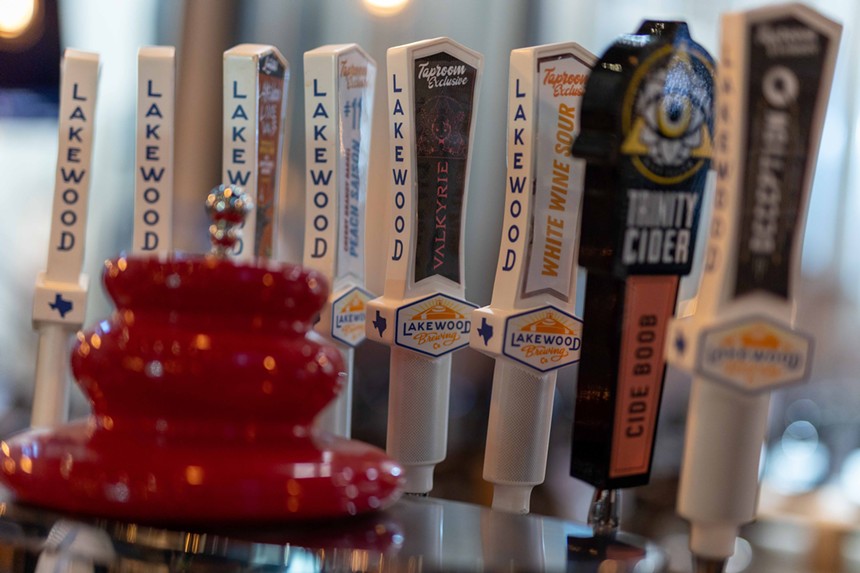 Lakewood Brewing Co. is celebrating 10 years of craft beer this year.
Nathan Hunsinger
It’s hard to say if the industry has reached a high-level mark. New breweries continue to open while others close, although openings far outpace closings. BeerinBigD.com lists almost two-dozen variations of brewhouses, pubs and breweries on its “In Development” page. Even during COVID-19 shutdowns, new breweries continued to open at a decent clip. There were a total of 341 craft breweries statewide in 2019, 364 in 2020 and 406 in 2021, representing 20% growth over almost two years of a pandemic.

Loyalty might not be for a style of beer, but for the community and engagement found in Celestial’s field day and in Community’s large new courtyard. Vector Brewing is a family-owned brewery in Lake Highlands that opened in 2020. It’s regularly packed with families; the brewery has even had to set a curfew for kids.

For new brewery Siren Rock Brewing in Rockwall, community was the mission. Eva Cannon is the founder and vice president of marketing.

“When we sold our technology company in 2017, we wanted to be part of the craft beer industry not only because of our love of craft beer but because the industry as a whole was unique in that it was a true community,” she says.

She says the vision for Siren Rock Brewing was a cross between Napa Valley and a modern production brewery. A chef-driven kitchen and open dining room that spills out into a courtyard, where they host morning yoga sessions and live music on weekends, help achieve that.

“Our vision included an elevated yet comfortable place that the community could hang out and tell their out-of-town friends to visit when they come in,” Cannon says.

If North Texans are looking for a locally made beer or a community space, they win either way. While the craft scene might loose some technical points for lack of classic style brews to sail it through good and bad times, it gains points for ingenuity.

While there’s no sign of this ship slowing down, that doesn’t mean the sailing is always smooth. Armadillo Ale Works had been operating since 2010 in a large brewery in Denton but closed this year, as did Legal Draft Brewing in Arlington, even after receiving hundreds of thousands in pandemic assistance.

Despite it being a tough business to predict, Bens says people get into craft beer not for the financial rewards, but rather because of a passion for the craft and community, “and that’s what keeps people going as small, independent craft beer producers.”

That and birthday parties, doodles, biergarten yoga and the whole family packing up to head to the brewery on a Saturday afternoon. Or getting sweaty at field day while sipping a beer that was made a stone’s throw away.

This leads us to a handful of our favorite craft breweries in the Dallas area. The highlight reel here focuses on good beer, convivial spaces and perhaps even some good grub to soak it up.

Click this link to see the full list.
KEEP THE DALLAS OBSERVER FREE... Since we started the Dallas Observer, it has been defined as the free, independent voice of Dallas, and we'd like to keep it that way. With local media under siege, it's more important than ever for us to rally support behind funding our local journalism. You can help by participating in our "I Support" program, allowing us to keep offering readers access to our incisive coverage of local news, food and culture with no paywalls.
Make a one-time donation today for as little as $1.