Good to Go: The Fantastic Onion Rings and Burgers at Blues Burgers 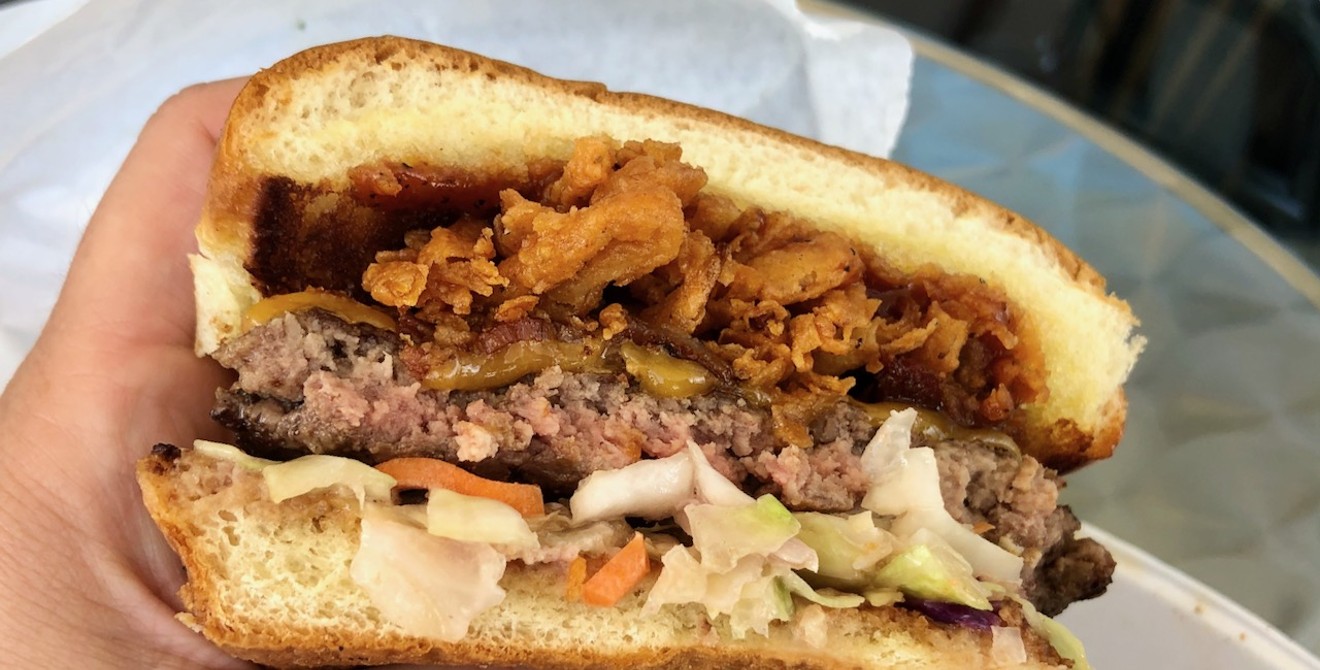 Smokey John’s Bar-B-Que had been selling shoebox lunches, symbolic of oppression during the age of Jim Crow. I had intended to get one, but so had hundreds of others that day. The line wrapped through the inside of Smokey John's and out the door. Pressed for time, we started to head out of the parking lot, then noticed Blues Burgers and pulled back in.

Howard Baldwin is the founder and owner of Blues Burgers, which he runs with the help of his wife, Catherine, and their son Brooks. The walls inside the restaurant are adorned with photos from concerts, all of which took place in Dallas, aside from the Beatles photos. When I asked Baldwin if he'd ever dabbled in music, he got very bashful and wouldn't say much, but it's safe to assume he's an ardent fan of live music.

But the food at Blues Brothers is a show-stopper. All of it. There are highly indulgent dishes: fried mozzarella bites served with a house-made ranch; King Rings, hand-battered buttermilk onion rings; Bad Pennies, which are skewered tater tots layered with jalapeños, wrapped in bacon, fried and slathered with melted cheddar.

While not everything is made in-house, Baldwin says he sources locally as much as possible, such as the prime Angus beef used in the burgers that's ground locally with his specific spices, and the brioche buns that are baked at a local baker. They do, however, make their own chips to go along with their bowls of queso.

One of the most popular items on the menu is The HMF burger, which is topped with applewood-smoked bacon, ghost pepper cheese, grilled jalapeños and onions, plus their spicy Blues Sauce on brioche buns.

Everything is made to order and is handed over hot. The patty on my Slow Hand burger was seared on the outside, a touch crisp, with a slightly pink middle. Perfect. Onion rings squished between the bun and beef added crunch. And the combination of the barbecue sauce and bacon gave it a smoky, sweet flavor.

If you can make it home without eating a side order of onion rings, then you deserve a gold star for restraint.


If you can make it home without eating a side order of onion rings, then you deserve a gold star for restraint. The light, crispy and perfectly seasoned onion rings were exceptional. Come to think of it, I'd never take those home; they're not something I'd want to share. Not even for a gold star.

If the weather is decent at all, it’s hard not to open the to-go boxes at one of their outdoor tables to enjoy the meal. Inside, seats are socially distanced and there are partitions between booths. The staff is cognizant of the safety protocols for right now. Plastic utensils are kept in the back, and tables are wiped down quickly.

Blues Burgers serves Dublin sodas along with beer, some of which are local. I regretfully realized after my visit that they also make their own fried pies.

When asked if they’ve been doing OK the last few months, Baldwin scoffed and said it’s been horrible. He has his eyes on the future, though. He’s looking toward opening a new, much larger space, called Local Tap and Table along the Katy Trail, near the Coors Light waterfall sign.

He also hopes to expand the Blues Burgers brand once all this has passed over, which is great news (both that there will be more burgers and someone expects this to all pass at some point). Until then, eat more onion rings.

Blues Burgers, 1820 W. Mockingbird Lane, Suite 44 (Medical District). Open for takeout and limited dining 11 a.m. to 8 p.m. Monday through Saturday.
KEEP THE DALLAS OBSERVER FREE... Since we started the Dallas Observer, it has been defined as the free, independent voice of Dallas, and we'd like to keep it that way. With local media under siege, it's more important than ever for us to rally support behind funding our local journalism. You can help by participating in our "I Support" program, allowing us to keep offering readers access to our incisive coverage of local news, food and culture with no paywalls.
Make a one-time donation today for as little as $1.