Underneath the new upstairs mezzanine at Desi District in Irving. Brian Reinhart
For years, one of my favorite spots to get a quick lunch in Irving has been Desi District, a fast-casual Indian restaurant and grocery with modern branding, scrumptious snacks, fusion “taco-dosas” and a case full of subcontinent-flavored cupcakes.

As Desi District gained renown in Las Colinas — including a two-star Dallas Morning News review — they got ever busier, and snagging a table became difficult. This year, they took action, and now one of Irving’s most exciting restaurants is enjoying an expansion and redesign of the original location.

This week, Desi District opens a second location, 20 miles north of the original in Little Elm. The new place includes a restaurant, butcher shop and banquet hall for events.

“Slowdown actually gave us an opportunity to expand and start planning for other places,” says co-owner Sheetal Liddar. “We did more than renovation. It was planning our expansion across Dallas.” That plan includes ideas for as many as five or six new Desi Districts in the next few years.

At the Irving original, the dining room has been redesigned with care. The walls are painted with menu item names, food pictures, slogans and advice. On the right-hand side, there’s a new upstairs section that complements the industrial-chic design of the space, with its metal chairs and exposed light bulbs.

“We planned for a two-level concept to seat more for two reasons,” Liddar explains. “COVID, we wanted to keep folks spaced for safety reasons. And second, if people wanted a rental space for events and large families, we could have that.”

The small grocery section was relocated to its own huge space one spot down the strip mall. Desi District’s grocery now has room for fresh produce, spices, frozen Indian meals, a halal butcher case (need any goat hearts?), a fresh roti-making station and even live tanks for seafood. 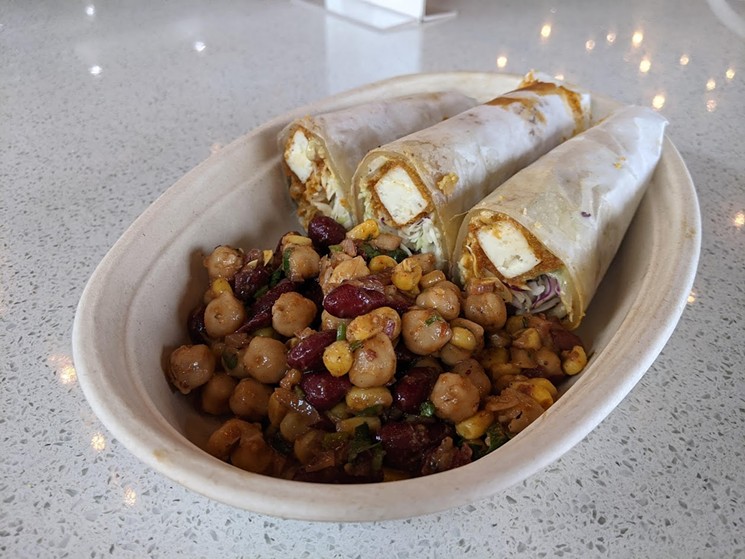 An achari paneer kati roll at Desi District.
Brian Reinhart
The Little Elm location, which soft-opened last week and debuts fully on June 4, will have a butcher counter, too, although there is another Indian grocery in the strip mall already which Desi District doesn’t want to compete with. Instead, they’ll focus on a full-service banquet hall, which is already booked up through June. There’s actually a third location in Plano already, but it’s just a small meat market the owners hope to expand. (Desi District’s meat markets are halal, and animals are butchered on-site.)

Up next, the budding chain is targeting Frisco and McKinney, with an eye to eventually reaching the city of Dallas itself. But a good Dallas location might take a while to find.

“Trying to find that ideal location is a key,” Liddar says. “Finding a place where we could attract the office crowd in the afternoon, and in the evening a bar-hopping crowd who could come for some food. That has been the challenge.”

Lest there be any doubt, the kati rolls, veggie bhajis, dosas and chaat at Desi District are just as good as ever. To be sure, a couple of weeks ago I stopped by and ordered a selection for lunch, including a basket of perfectly crispy mixed-vegetable bhajis speckled with strips of onion and red hot pepper.

The kati rolls — mine was achari paneer, paneer cubes battered, fried and coated in a gently spicy sauce — are still a wonderful lunch, and they come with a refreshing salad of chickpeas, red beans, corn, red onions and lime juice. I even enjoyed the samosa chaat taco, which deconstructs a samosa and reassembles all the ingredients inside a tortilla with a gentle hat of slaw.

With both the dining room and grocery greatly expanded, there’s never been a better time to visit the original Desi District. But if it’s a long drive away, don’t worry: They’ll probably open one near you soon.

Desi District, 6451 Riverside Drive, #100, Irving, and 1630 FM 423, #100, Frisco
KEEP THE DALLAS OBSERVER FREE... Since we started the Dallas Observer, it has been defined as the free, independent voice of Dallas, and we'd like to keep it that way. With local media under siege, it's more important than ever for us to rally support behind funding our local journalism. You can help by participating in our "I Support" program, allowing us to keep offering readers access to our incisive coverage of local news, food and culture with no paywalls.
Make a one-time donation today for as little as $1.