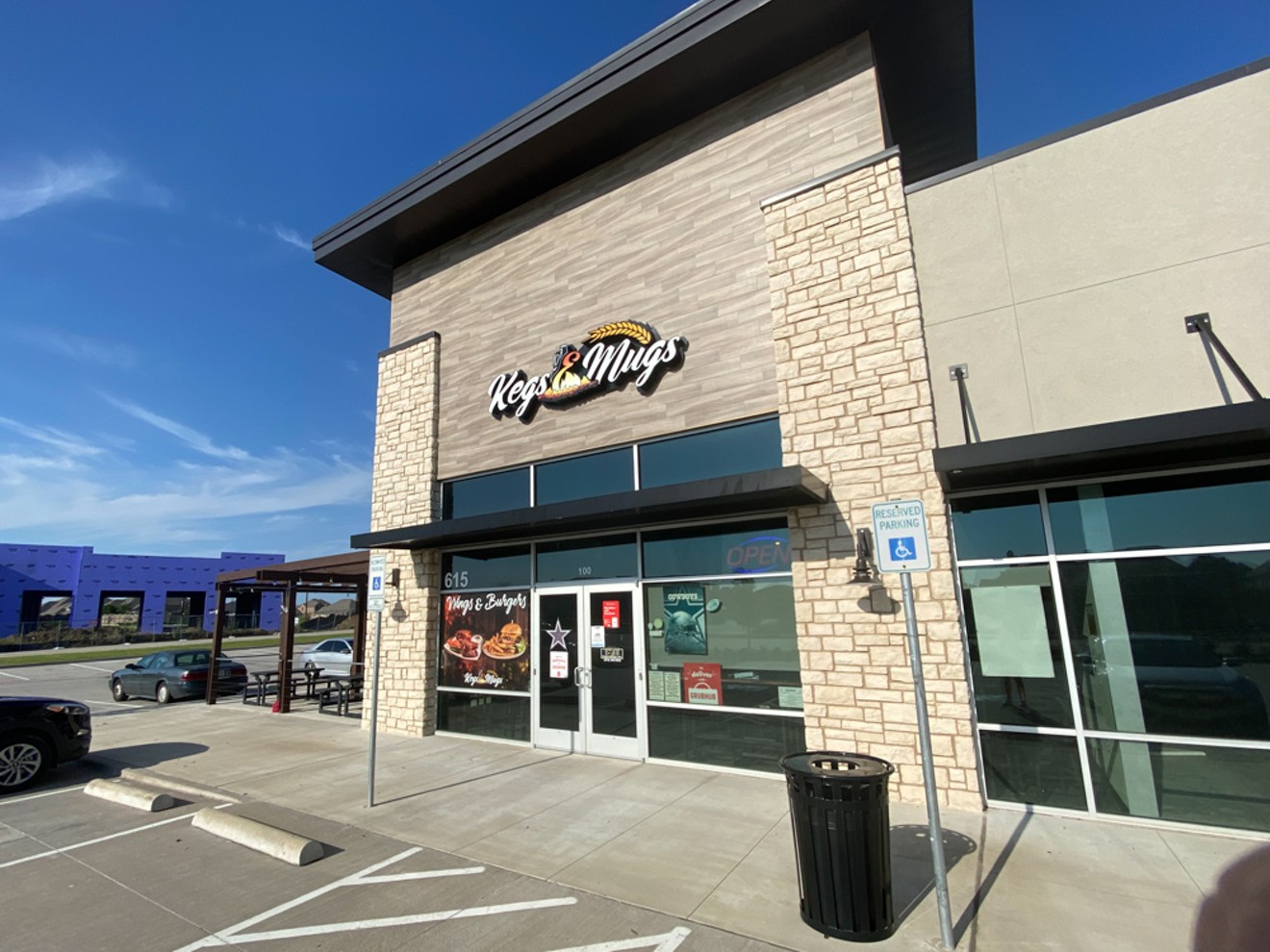 Kegs & Mugs brings much needed craft beer to Castle Hills. Chris Wolfgang
For every check in the "pros" column for living in the suburbs, it's just as easy to come up with something on the  "cons" side of the ledger. Is your bigger yard worth living in a neighborhood where everything looks the same? Do you want to leave your old neighborhood bar in the city for easier access to the freeways and better schools?

OK, so equating a bar to your child's education probably isn't the best comparison, but you didn't come here for parental advice, either. But it's possible to live in an upscale suburban neighborhood like Castle Hills, a master-planned community in eastern Lewisville, while still finding a local watering hole that serves up beer from the area's best local brewers. That's where Kegs & Mugs comes in.

This isn't the first craft beer spot to make Castle Hills its keep. TKO Libations spent two years in the Castle Hills Village Shops before closing in January 2020. But their location was buried deep within the winding neighborhoods of Castle Hills, and on our visit in 2019, we noted an "almost zero chance a beer-lover will just casually stumble upon this place" unless you knew someone who lived in the neighborhood. A neighborhood bar that you could also bring the family to — Kegs & Mugs knows their demographic.
Chris Wolfgang
Nestled at the end spot of a newly built strip mall on Old Denton Road, Kegs & Mugs location seems better primed to catch passers-by than TKO, given its location on a major thoroughfare and proximity to the Sam Rayburn Tollway. The location seems to work, as we first noticed it ourselves on one of our multiple trips through the area. Also, the end spot of the strip mall allows Kegs & Mugs to set up a small dog-friendly patio, adding to their appeal.

Inside, the main bar occupies the back wall, while a long bar-height table neatly bisects the rest of the dining room. Light fixtures over the center of the dining room are made from empty beer kegs, while walls of windows on two sides keep the space bright. A couple of large TVs will surely garner the attention of sports fans on game days. Kegs & Mugs isn't a dimly lit dive-bar bar, but a place where you can bring the family, which fits into the area's demographic. Summer isn't stout season for most people, but we're suckers for a dark beer, like this peanut butter milk stout from Belching Beaver Brewery.
Chris Wolfgang
We've no family in tow today, and we're here for a beer. Kegs & Mugs has almost three dozen offerings on tap, stocked heavily with local brewers like Hop & Sting, 3 Nations and Texas Ale Project. And in researching this story, we came upon a technological twist to the local brewpub: Kegs & Mugs publishes their tap list online and updates it in almost real-time. At a glance, you can see if your favorite pint of suds would be available, along with a visual representation of the keg's status. The digital tap list also powers the menu board over the bar, with the same color-coding status of the kegs, and it's so brilliant that we wish every restaurant that serves beer would use it.

With our dark beer needs satiated, we stayed lighter and local for the rest of the evening. Hop & Sting's Miracle Wheat with Blood Orange (5.5% ABV) has a citrus flavor that shines more brightly than Revolver's Blood and Honey, while their Funkadelicious (6.3% ABV) sour neatly balances tart berries with a subtle hint of vanilla. Hop & Sting's Miracle Wheat is a brighter take on Blood and Honey, while Kegs & Mugs' bar fare is as expected.
Chris Wolfgang
Food-wise, Kegs & Mugs' menu leans bar-traditional, and burgers, wings and tacos rule the day. Creatively, little new ground is broken, but the food choices are solid (and necessary if you plan on more than a few beers.) Two of us shared an order of 15 wings ($18). The wings were crispy, if a bit heavily sauced, but the Buffalo sauce needs more kick. We asked for a side of the Lightning sauce, which we were told was based on Dave's Insanity Hot Sauce, which kicked up the heat to almost unbearable levels. Even our capsaicin-loving friend who joined us for the evening declared the sauce "quite hot."  A middle ground would be nice here.

Burgers are a safe but smart choice. All of them come on a slightly sweet Hawaiian-style bun, and the fries, while being the slightly thicker wedge cut variety, were battered before frying, which resulted in a very light and crispy fry that had us coming back for more.

There's no reason that a local beer bar can't find a home in the suburbs. Chain restaurants aren't the entire norm when you leave the city, and it's possible to find gems where you may not expect them. Suburbanites still need good beer on occasion, and we're glad to see spots like Kegs & Mugs filling this gap nicely.

Kegs & Mugs, 615 FM 2281 (Old Denton Road), Suite 100, Lewisville, 4 p.m. - 10 p.m., Monday-Wednesday, 4 p.m. - 11pm Thursday, 11:30 a.m. - midnight Friday - Saturday, 11:30 a.m. - 10 p.m. Sunday.
KEEP THE DALLAS OBSERVER FREE... Since we started the Dallas Observer, it has been defined as the free, independent voice of Dallas, and we'd like to keep it that way. With local media under siege, it's more important than ever for us to rally support behind funding our local journalism. You can help by participating in our "I Support" program, allowing us to keep offering readers access to our incisive coverage of local news, food and culture with no paywalls.
Make a one-time donation today for as little as $1.