On a Bustling Corner of Henderson Avenue, Stellar is Anything But 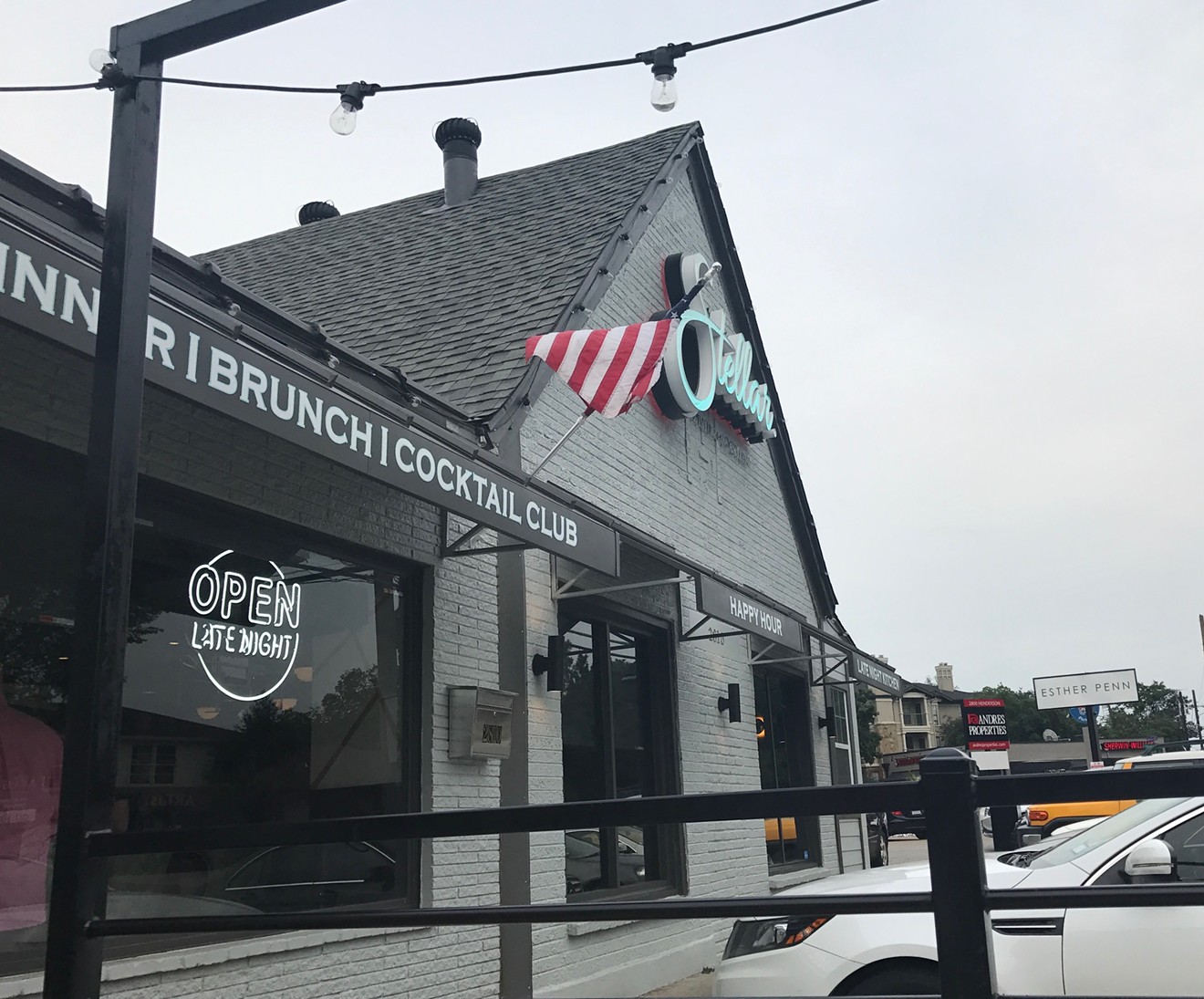 Stellar opened April 29 in the Knox-Henderson space that used to be Vickery Park. Beth Rankin
It was one of those restaurant visits so bad, you start to wonder if you're on "Candid Camera."

It started with a server wearing less than what most people wear to the beach; her lacy lingerie top (a black bra with sheer black lace covering a small portion of her midsection) was complemented by black shorts smaller than most underpants. The shorts — which had ties up the sides, exposing even more flesh — were so short, she constantly grabbed at her crotch in an effort to stop them from crawling up inside of her, never to return.

After one visit to Stellar, a new bar and restaurant in the Knox-Henderson space that used to house Vickery Park, we're inclined to take a cue from her shorts and high-tail it out of there, never to be seen again.

To be fair, the staff at Stellar were sweet as pie. Our server — who was actually a bartender who'd been asked to fill in on the floor, she said — was kind and attentive, perhaps even a bit too attentive since, at prime happy hour on a beautiful Friday afternoon, this new "hot spot" was suspiciously quiet save for the months-old baby screaming relentlessly next to the bar. 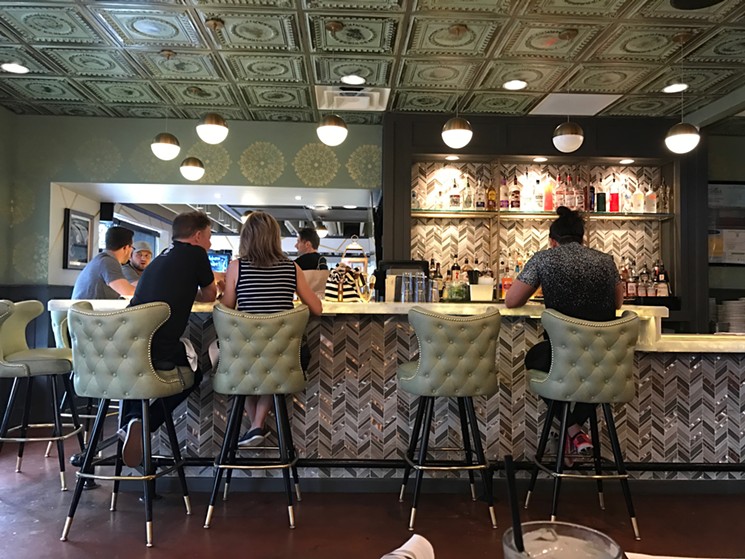 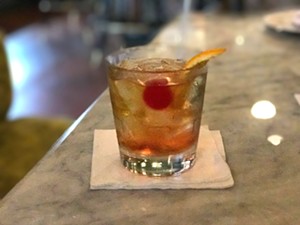 The Word from the Bird ($10) tastes of watered-down Makers Mark and little else.
Beth Rankin
Stellar's space, heavily redesigned, is perky and cheerful but, save for the lighting, in no way midcentury modern; the buildout is far too reliant on current design trends to fit the MCM aesthetic. The bar area features a glowing white marble bar and good lighting, but the attractive bar is marred by the addition of several comically large televisions. Stellar is not even remotely a sports bar, so why bother with such massive TVs? It's one of the first signs that this place is having an identity crisis.

The drink menu is small but affordable, relatively speaking, with $10 to $12 cocktails. That's where the good news ends, however, because after sampling three cocktails, we can safely say that this cocktail program needs serious help. Hell, even the word "bitters" is spelled wrong, which doesn't exactly inspire confidence. The Word from the Bird ($10), Stellar's take on an old fashioned, made us wilt as soon as it hit the table. It looked watery and sad, a single cherry bobbing in the glass. It tasted of watered-down Makers Mark and little else; the "flaming orange peel" garnish was merely a hunk of fresh orange peel sitting atop the excessive ice.

The What's Buzzin Cousin ($9) was, perhaps, one of our least favorite things, as we derived exactly zero pleasure from having to say obnoxious phrases just to order a goddamned drink. Our server warned us that it was "very orange," and she was not lying. Made with Ketel One, mandarin liqueur and organic orange juice and garnished bizarrely with a rosemary sprig perched on top of the glass, it did, in fact, taste like orange and nothing else, and the addition of rosemary contributed nothing to the already lackluster experience.

Paging Carrie Bradshaw: This drink looks like it would be right up your late '90s alley, but it tastes like a cleaning spray.
Beth Rankin
The cocktail menu looked like amateur hour from the start — most of the drinks included Wild Turkey, Grey Goose Le Citron, Crown Royal Vanilla and Smirnoff Blueberry, which may be the most basic Dallas girl liquors on earth — but we tried again with the Pinky's Out of Jail ($12), another bizarrely named cocktail that proved so disgusting, it sat on our table untouched for the remainder of our stay.

It was made with Le Citron, lemon juice (if you really have to advertise that your lemon juice is "fresh-pressed," that sets the bar pretty damn low), Champagne and blueberries shaken and "served chilled over a cloudy layer of dry ice." If dry ice was involved, we didn't see it; what arrived at our table was a dated-looking pink cocktail with blueberries sunken in the bottom of a martini glass. It looked like 1997 and tasted like Pine-Sol.

We tried some food, but the experience didn't get much better. The Texas poutine ($14) involved ho-hum french fries (advertised as Parmesan truffle fries but with none of those flavor characteristics) covered in a "Southwest cheese sauce" that looked and tasted like ballpark nacho cheese. The shredded brisket was dry and flavorless, the microgreens seemingly useless. The edamame hummus ($8) was innocuous but boring, and it came bizarrely garnished with a purple orchid. 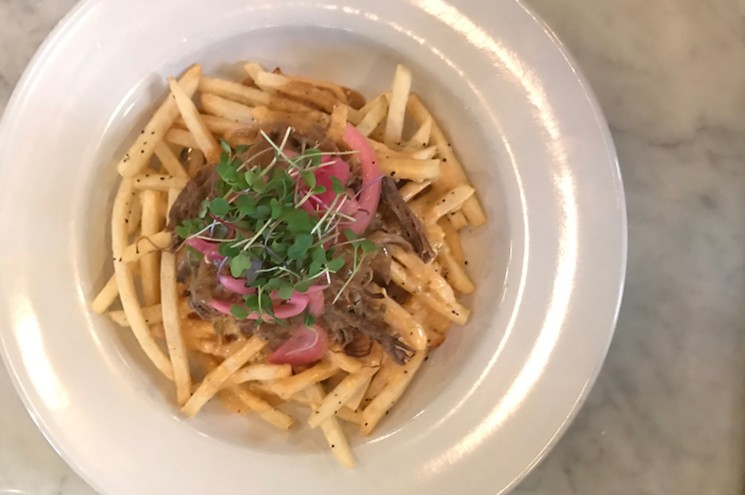 The Texas poutine ($14) includes ho-hum french fries covered in a "Southwest cheese sauce."
Beth Rankin
Toward the end of our meal, while food and drinks were still sitting on the table, things got even more bizarre when a member of the staff did a round through the building, spraying a disinfectant spray on the floors along the edges of the room. At one point, he passed our booth, spraying chemicals so close to us that I had to check my shoes for errant spray. 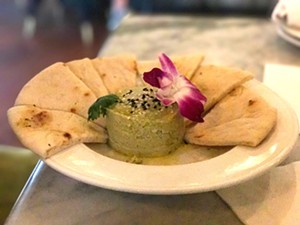 The edamame hummus ($8) is bizarrely garnished with a purple orchid.
Beth Rankin
If someone comes by spraying a harsh, odorous disinfectant at your feet in the middle of Friday dinner service — the absolutely worst moment to flood your dining room with harsh chemical odors — it's worth getting nervous about. What invisible problem was so pressing that it compelled Stellar's staff to risk dumping Lysol on patrons? Whatever that problem is, we don't want to know about it.

Stellar has been open less than a month, so it's possible that things could turn around. But first, it'll have to decide what, exactly, this place is meant to be — a nightclub with scantily clad servers, a place to watch the big game or an "American cuisine" restaurant serving poutine and hummus. Whatever Stellar is right now, it isn't working. And in a bustling food and drink neighborhood like Knox-Henderson, there's no surviving without a sense of identity. Once Stellar finds its, we'll be back to give it another shot. Until then, we'll be busy trying to remove the smell of Lysol from our shoes.