Hey, Bigfoot Believers: the 2018 Texas Bigfoot Conference Is Coming Up 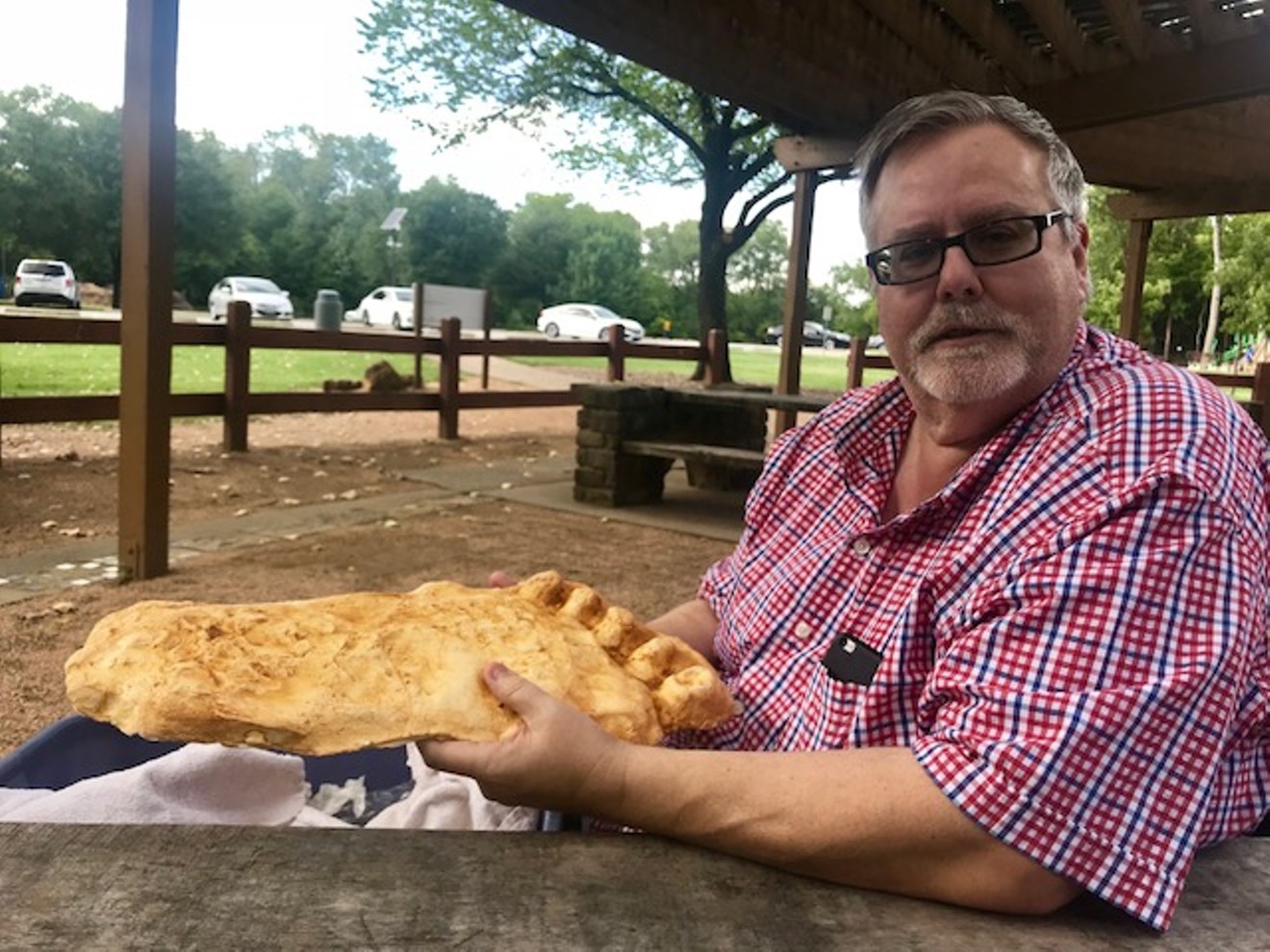 Craig Woolheater has a foot cast he believes to be evidence. Karen Gavis


Wearing a short-sleeved, plaid shirt and black-rimmed glasses, Craig Woolheater didn’t look much like a hoaxter.

The 58-year-old Euless resident and co-founder of the Texas Bigfoot Research Center sat at a picnic table in Arlington’s River Legacy Park recalling how he was just a kid visiting his grandparent’s house in Fort Worth during the summer of 1969 when the “Lake Worth Monster” was making headlines.

“We were a week-and-a-half away from landing on the moon, and on the front page was about some creature that was seen out at the lake,” Woolheater says about whatever it was people say they saw that summer.

Lots of towns have localized “monsters” that are sighted near bodies of water, Woolheater says, and people have different names for them, such as the Lake Worth, Turkey Creek or Big Cypress Bayou monsters, but they’re generally regarded as some type of “bigfoot.”

Woolheater, who’s gearing up to host the 2018 Texas Bigfoot Conference on Oct. 19-20 in Jefferson, Texas, was fascinated by the Lake Worth Monster as a kid, he says, even trading another kid for a book with a chapter about bigfoot. His interest was further piqued by The Legend of Boggy Creek, a 1972 docudrama about a bigfooted creature around Fouke, Arkansas. The movie, which was popular on the drive-in circuit, grossed $25 million.

Then on Memorial Day weekend in 1994, while driving back to Dallas from New Orleans, Woolheater says he thinks he may have seen one himself.

“I know what it wasn’t,” he says, adding that “it was something I didn’t have a reference for.”

Woolheater and his girlfriend at the time, along with another passenger who was asleep in the backseat, were driving along Highway 71 around 11:30 at night. The weather was nice, and they were in an unlit, swampy area about 10 minutes south of Bunkie, Louisiana. To the right was a tree line about 35 feet out, he says, and that’s where they saw something walking parallel to the road about halfway to the trees.

“It’s something that’s about seven foot tall,” he says. “It’s covered with hair. The hair looks gray in my headlights. And it’s actually moving. It’s walking.


“As we passed it,” he continued, “we both turned to each other and simultaneously said, ‘Did you just see what I just saw?’ and we said, ‘Yeah.’”

Woolheater, who works as a water conservation consultant by day, says the figure had been walking forward with its back to them, kind of slumped over with its head down. He says he wanted to do a U-turn and try to get a closer look, but his girlfriend said “Hell no!”

Woolheater didn’t talk much about what he saw until he got on the internet in 1997 and was able to connect with others who had similar experiences. And that’s pretty much what the Texas Bigfoot Conference is all about. In October, Bob Gimlin, a living legend among bigfoot researchers, will come to Jefferson for the first time for a catered tribute dinner and program on Oct. 19. Gimlin, a rancher who will turn 87 the week of the conference, is world famous among bigfoot believers for the one-minute, 35mm Patterson-Gimlin film that captured what appears to be a bigfoot-like creature in 1967 in Northern California.

The conference, which will run Friday night and all day and into the night on Saturday, will also feature “evidence” such as foot casts as well as T-shirts, bigfoot paraphernalia and DNA collection kits. Another catered dinner will be available Saturday night, along with a special screening titled American Monster Tour by cryptid investigators Ken Gerhard and Lyle Blackburn. VIP tickets cost $75 for each day of the conference and will include reserved seating, dinner and presentations. Those planning to go should buy their tickets early, Woolheater says, because the event sells out.

A few cities have tried to lure the Texas Bigfoot Conference away from Jefferson in the past, Woolheater says, but he’s brought the event home where it began.

“That’s where his mom started it,” says girlfriend Tammy Allen, who helps with the conference, which is about three hours east of Dallas and draws hundreds of people annually to the town of about 2,000 people.

“Jefferson has now been declared the Bigfoot Capital of Texas as of this year,” she says.

Woolheater says a Texas Bigfoot scholarship fund in honor of his mother, Dona Reed, who died in 2009, was established last year for Jefferson High School students studying some brand of science.

“I never would have been able to start this thing and get the ball rolling if it hadn’t been for my mother and stepfather’s assistance,” says Woolheater of the former bed-and-breakfast owners.

Woolheater says Native American legends about bigfoot persist and there are documented accounts of Texas sightings in the 1800s. While everything’s basically theories with no proven facts, he says he’s talked to hundreds of people from all walks of life, including people in law enforcement and the military, who say they’ve seen a bigfoot. There are even tales, he says a bit unassuredly, “of women being dragged off and mated with bigfoot.”

A preacher once told Woolheater that he’d been driving with his wife along a desolate road in a Ford pickup when a bigfoot crossed the road in front of them causing him to slam on the brakes to keep from hitting it. Woolheater says the minister told him the creature was so close that its hand grazed the hood of his truck and he later regretted selling the truck “because it had been touched by bigfoot.”


“I feel like at least a percentage of those people were relaying the truth as they knew it about what happened to them." – Craig Woolheater


“I feel like at least a percentage of those people were relaying the truth as they knew it about what happened to them,” says Woolheater, adding that some people might be lying, hoaxing, impaired or misidentifying known wildlife or humans, but even if one person is truthful “there’s something out there that’s unexplained and uncatalogued and undiscovered by science as far as we know.”

Woolheater believes the creatures are pretty rare, but he says there would have to be a breeding population to sustain the number of sightings reported in North America. And like any wildlife, they’d need an abundant water and food source as well as shelter, which he says explains why sightings commonly occur along waterways like the Red River and in heavily wooded areas.

Woolheater was living in a loft at Walton and Commerce in Deep Ellum when he began the Bigfoot Research Center in 1999, he says. He’s since been approved for long-term camera projects through several governmental agencies. He’s worked in conjunction with the National Park Service and Texas Parks and Wildlife as well as the National Forest Service. He’s also helped with museum exhibits like "Bigfoot in Texas?" at the University of Texas at San Antonio's Institute of Texan Cultures.

Woolheater says for him, it’s harder to believe that everybody is lying than it is to believe that there’s an uncatalogued “bipedal hominid out there that lives in the woods.”

He doesn’t believe they’re supernatural beings, he says, which would require him to try and explain one mystery using another mystery. And he insists that he wasn’t an avid hunter, fisherman or outdoorsman, although he and a group of others did find 16-inch tracks with toes in a grassy meadow near Lake Tawakoni in 2001 in 30-something degree weather during a mist.

“My outdoor experience was as a Boy Scout,” he says. “But I had seen something that I can’t explain, and I was seeking answers.

“I don’t know for sure 100 percent what it was,” he continued. “I don’t have a bigfoot arm that I can go get tested.”

Allen says although she’s never encountered a bigfoot, she has talked with respected scientists and researchers, none of whom have claimed bigfoot is out there, but have all said “I can’t prove that it’s not.”

And for now, that search continues.

Tickets are $75.
KEEP THE DALLAS OBSERVER FREE... Since we started the Dallas Observer, it has been defined as the free, independent voice of Dallas, and we'd like to keep it that way. With local media under siege, it's more important than ever for us to rally support behind funding our local journalism. You can help by participating in our "I Support" program, allowing us to keep offering readers access to our incisive coverage of local news, food and culture with no paywalls.
Make a one-time donation today for as little as $1.