Appetizers are nice friendly little things, like shrimp cocktails and fried crab cakes that look like powder puffs. But fried jumbo asparagus? What a freak. Served on a bed of field greens and roasted corn relish with an addictive, smooth mango-serrano chili cream sauce, these battered and fried asparagus stalks look like battle-hardened insect legs. Yet you must never judge asparagus by its duds. The stalks are delicious, with a brittle, crisp coating and a snappy stem that didn't dry out or go mushy after a trip to the fry bath. Don't try this with a carrot. 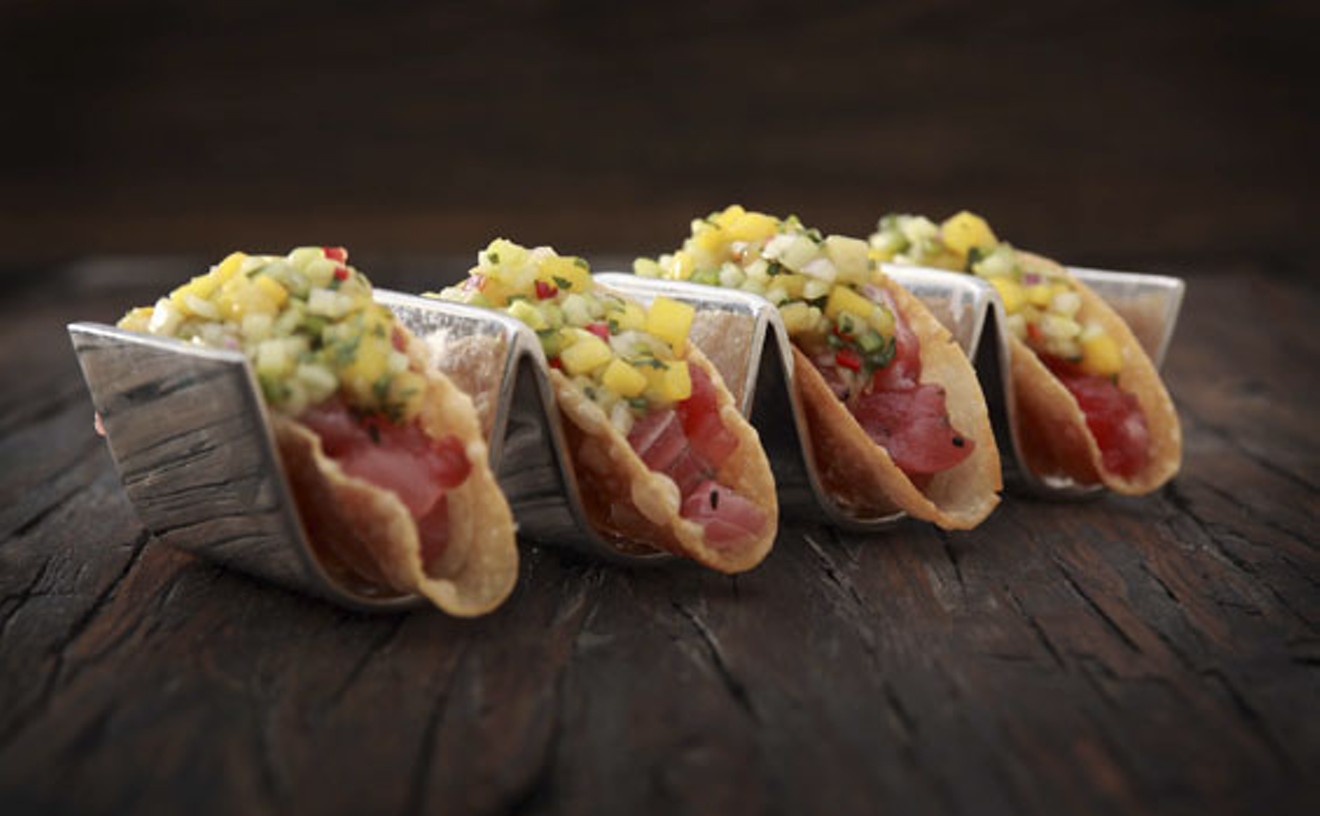 Dragonfly's white bean soup is as beautiful as it is tasty. It's assembled at the table with bowls of ingredients--tomato, tiny crouton cubes, smoked bacon and white beans--ceremoniously transferred to a serving dish. This soup is a smooth, piping-hot blend with a creamy texture and a delicate racy aroma from pureed fennel, while the rough bean grip is pleasantly pronounced. It's as nourishing to the paunch as it is captivating to the noodle, which is pretty good for a bean.

Nikita is a hash of Soviet Bloc funk twisted and sanitized into Red hip, which means it serves caviar and James Bond flicks. But it also has one swell innovation crafted with a lowly proletariat root--the beet, progenitor of borscht. Nikita's golden beet and goat-cheese salad, feathered with arugula and planked with petite green beans, is a masterpiece. Slightly sweet and tangy pink beets loiter on the edges of a plate puffed with greens and doused in horseradish vinaigrette. Add a flight of vodkas, and it will send you into orbit like Laika the Sputnik 2 space dog.

La Dolce Vita
Take a break from overpowering, burnt-cheese-laden, tomato paste-centric Italian food with a light dish from La Dolce Vita. While they do serve classic pastas and pizzas, we often opt for the salads. The caprese, one of our favorites, is flavorful with juicy tomatoes, red onions and fresh, delicate mozzarella mixed with field greens and the house vinaigrette. We adore the arugula salad--crisp, peppery arugula and shaved lettuce drizzled with lemongrass olive oil. The fact that you can dine here without feeling like you ate a bread truck makes it a great lunch spot.

Back in the '90s, when Seinfeld dominated prime time, one of the things Elaine really wanted was a big salad. Sounds easy enough, but apparently it's more difficult than one might think, and Elaine's not the only one who's come up short. Dallas menus are laden with subpar salads--limp lettuce, bland dressings and sparse ingredients abound. But not at Baker Bros. These guys do it right, and they do it big. All five offerings on the deli's salad menu are excellent, but the Santa Fe chicken salad is a standout. A mix of greens sown with roasted chicken, cheddar cheese, tomato, red onion, green onion, black olives, cilantro and spiced pecans, the Santa Fe is a meal within a meal. Just when you think you've picked out all the good stuff, a quick flick of the fork reveals another layer of once-hidden heaven. And topped with Baker Bros.' Southwestern honey mustard, well, it's just too hard to talk about. 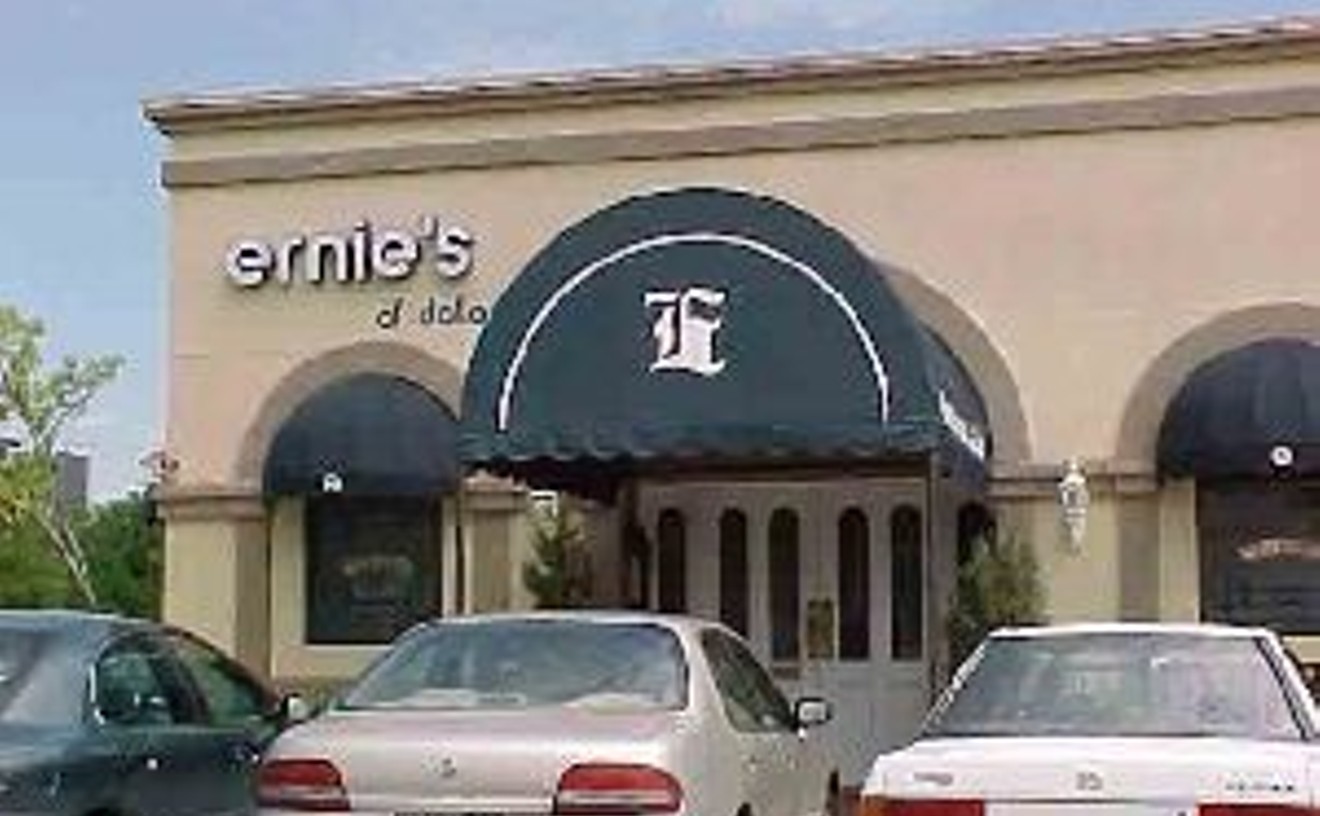 Veal piccata, a thin veal escalope that's dredged in flour, seasoned, sautéed and sauced in lemon, takes on many forms in Dallas. Sometimes it's pasty, sometimes thick. Sometimes it's drowning in lemon to the pucker point. But Ernie's, a supper club with dancing and avocado crab salads, gets it right. Pounded into a skinny scaloppine and drenched with a bracing butter, wine and lemon sauce seriously studded with capers, the meat is tender and juicy. Plus, the flour dredge on the veal never congeals into that slimy Lake Ray Hubbard mucus that is so common in many Dallas preparations.

Wine flights, even in rooms posing as wine bars, are often a rarity. When they are offered, they arrive as laser-printer sheets of paper with little circles so servers can bull's-eye the glass bases in proper flight formation. But at Mercy, flights are delivered in 6-ounce crystal carafes dangling from custom-hewn loops of iron with little hooks fastened inside the carafe handle. Tasters can pour wine from the carafe to the glass at their leisure. Looking is half the pleasure of wine tasting--at least until your vision blurs--and this contraption is stunning. And far be it from us to suggest anything illegal, but they can also be used to hang tiny little pots, thus making swell windowsill herb gardens.

It's truly weird when a bit of hog can outflank a steer in an upper-crust steak house. It's even weirder when that pork piece is not a loin or a chop, but a shank. It looks like a battered, partially deflated deep-fried soccer ball: in other words, butt ugly (which is no way meant to denigrate pork butts). But Smith & Wollensky's crackling pork shank is a beautiful thing in the mouth. Sitting in a rat's nest of sauerkraut studded with poppy seeds, this crusted, crunchy brown ball is a hive of lusty rich flavor delivered by moist, tender pork flesh. And its preparation is just as ugly as its appearance. The shank is scored, cured in salt and sugar for a day or two, braised in beef lard and deep-fried in oil. The deep-frying sheathes it in crisp crust (leaking fat with every chew--yum) that seals in the juices, allowing the pork to come off like silk. You can feel your arteries quaking in fear as your tongue waters in anticipation. Get in there and get one quick, before the National Institutes of Health sends in a SWAT team and puts a stop to this vicious health crime.

Best Dallas Restaurant That Ended Up in Podunk

OK. Glen Rose isn't Podunk. It's a swell little quaint town with lots of rejuvenating hospitality and giant fiberglass dinosaurs. But the restaurant in Rough Creek Lodge, an executive retreat with activities ranging from bird-watching to hunting wild boars, has a profoundly delicious menu--so delicious, it would do any haughty metropolis proud. Sherry-maple-glazed Texas quail is the best version of this bird (Nosh it or shoot it? You get to pick!) you're likely to find. Likewise, the porcini mushroom-crusted salmon elevates this stately fish to new levels. Peppercorn-crusted fillet of beef is pure silk. Pack your spyglasses or your Remington. But don't forget your refined sensibilities.

Even if Dawat didn't serve the exotic and sensually complex cuisine emanating from India, it would be an absorbing experience. Couched in a former General Cinema multiplex theater, Dawat is the creation of a pair of Richardson businessmen, one Pakistani, the other of Indian descent. They cobbled together 47 investors and $6 million to turn the place into FunAsiA, a complex featuring banquet rooms, a concession stand, an ice cream parlor, a fast-food outlet, an arcade, an advertising business, a theater that shows Bollywood films and an office where a free monthly magazine (FunAsiA) is published. The food is exquisite, even when left to the horrifying tortures of the buffet table, a ubiquitous staple in Indian restaurants that may in fact be a requirement under Texas state restaurant statutes. Chicken boti is moist (as are the lamb and beef dishes) with an army of flavors--lemon, coriander, garlic, ginger, cumin, garam masala (spice blend)--that seem to line up for dazzling choreography instead of a fighting formation on the tongue. Rice even has its 15 minutes--plain or adulterated--with firm, distinct and separate grains. Palak paneer, a spinach slurry blended with planks of white cheese, is sublime. Not bad for a place with ornate banquet rooms set up in traditional festive Indian wedding garb around the corner from an immense air hockey table.

Few car hawkers are as passionate about wine as Van Roberts (Point West Volvo) and his Lola. The restaurant is his vino playground. Roberts is a diligent and tireless wine-taster and list-tweaker, and his roster shows it. Lola's selection of Italian wines rivals that of just about any Italian restaurant in Dallas, and his group of Alsatian wines (more than 30) is unheard of in these parts. German and Austrian bottles, too. Half-bottles and magnums round out size options, and 25 wines are offered by the glass. There is also a collection of Roberts' favorite bottles from around the world. But the best thing about Lola's wine list is the prices, and not just the generous list of "twentysomethings" in the $20-$29 range. Roberts keeps his markups low, which means you can get a bottle of Krug Grand Cuvee for $170 (hard to find on lists for less than $200) or a '97 Diamond Creek "Volcanic Hill" cab for $180. This puts that special-occasion sip within reach with wines that most people will never taste in their lifetimes.