The title Best Hamburger is not limited to the burger alone. It encompasses the atmosphere and the options as well as flavor. When we want a burger, chances are we want a drink, too. (Hey, we're going for the full-blown unhealthy beef and brew combo.) Enter the Landing, as we neighborhood dwellers are prone to call it, and they've got the atmosphere and the options for our dietary delinquency. It's dark, cool and no one's easily identifiable should our running partner happen to saunter by. Plus, there's a selection of cheeses (go with provolone) to heighten the caloric content of our edible sin. The taste is slightly charred, not too salty and fresh with all the veggies piled on. And the bun...the bun is sheer toasty goodness. Fries abound, and there's even a veggie burger for the meat-free. Order a beer and burger, hit one of the best jukeboxes in town and choose a well-worn seat for a real red-meat treat.

Often, big muffs are overrated. What you want is a muff that is just the right size. You ever try to eat a muff that was too big to fit in your mouth? Not fun. Quality, not quantity, is the way to go when searching out a tasty muff. Which is why our favorite muffuletta, when we're not wanting to stuff ourselves, is the authentic one found at Gulf Coast. Served with Cajun fries and (if you're smart) topped off with a $2 Stoli Bloody Mary, this bite of heaven takes us back to New Orleans' Central Grocery, the originator of the muff. And if you can't pay homage to the muff's home, then don't put one in your mouth.

Crescent City Cafe
Isn't Louisiana considered one of the fattest states? Judging by the Louisiana cooking replicated in the Crescent City Cafe's muffuletta, it's no wonder. For the uninitiated, the muffuletta is a delectable sandwich with unusual flavor from a combination of ham and cheese and olives on a toasted loaf of sesame-seed-topped bread. The cafe sells the quarter muffuletta. Or you can get a half muffuletta, which is filling enough that you can skip meals for the next several days. Throw us some beads. 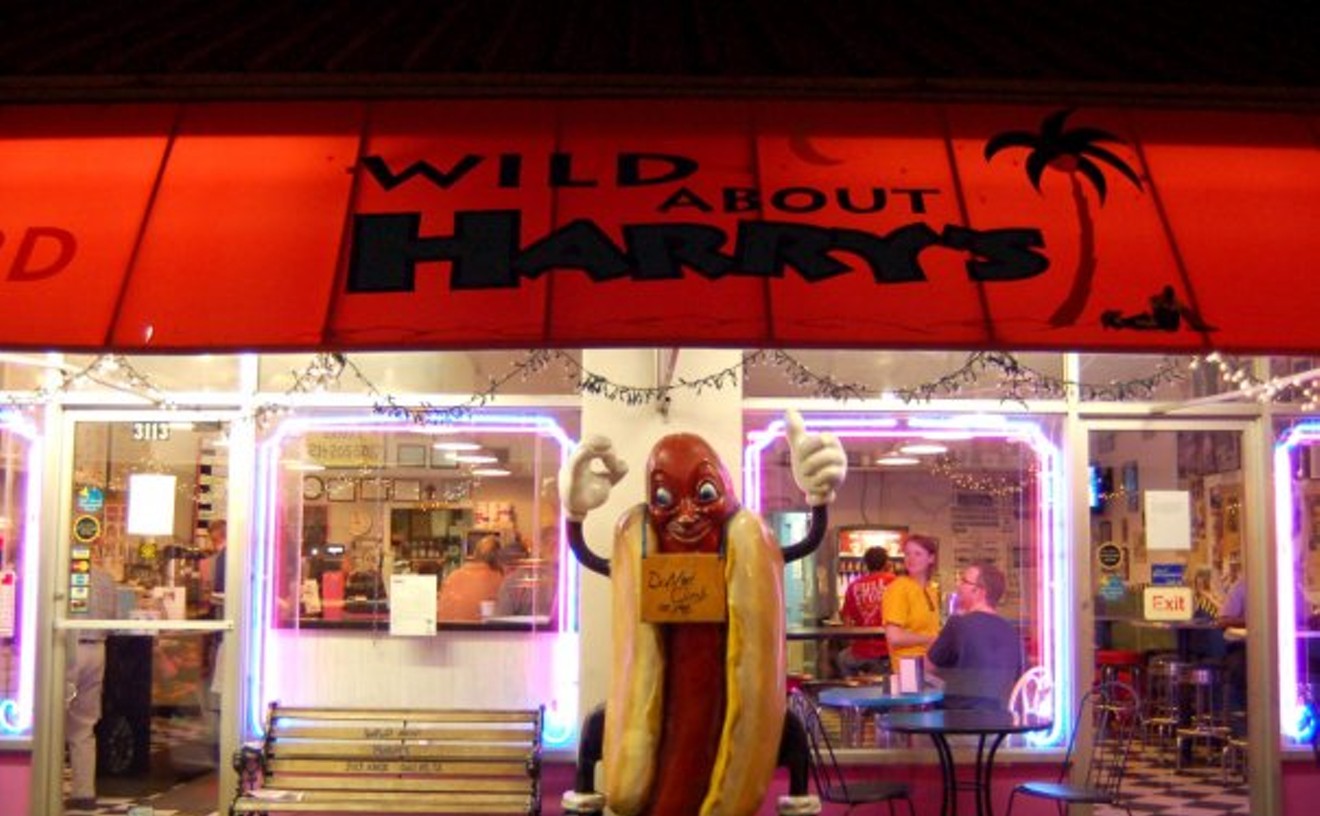 Harry's has had it going on since 1996. Truth be told, his mom had it before that, since it's her stellar recipe that makes possible the creamiest frozen custard ever to pass our lips. The shop makes custard daily, changing up flavors while keeping favorites like chocolate, strawberry, etc. It's probably safe to claim that if they've made it, we've tried it, and rarely have we been disappointed. Don't worry if a particular flavor doesn't appear on the day's list. Almost all flavors Harry's makes are available in pints and quarts. While in the shop, don't let a good dog down. Harry's is also famous for hot dogs (the best in the city), and there's nothing boring about them (the dog comes in various clothing from Texas chili to sauerkraut).

The qualities of perfect cheesecake are really oxymorons if you think about it. Each bite should be saturated with flavor but fluffy and rich, while also being light. The Xango has all those characteristics, plus a surprising one: It's wrapped in pastry dough and flash-fried. Sign us up. Understand, though, we're not supporters of all things fried. We don't dig the fried Twinkie, and frankly, a battered Snickers is way too much to deal with. The Xango, however, is so different from all the greasy, too-much-batter treats that are dunked in funnel cake mix. And while we do love a good funnel cake, in this instance, lighter is better. The pastry shell is crisp and thin, makes a nice crackle when attacked by a fork and, oddly enough, isn't greasy in the slightest. Topped only with cinnamon sugar, the Xango stands on its own (no unnecessary drizzle) and rewards the taste buds. 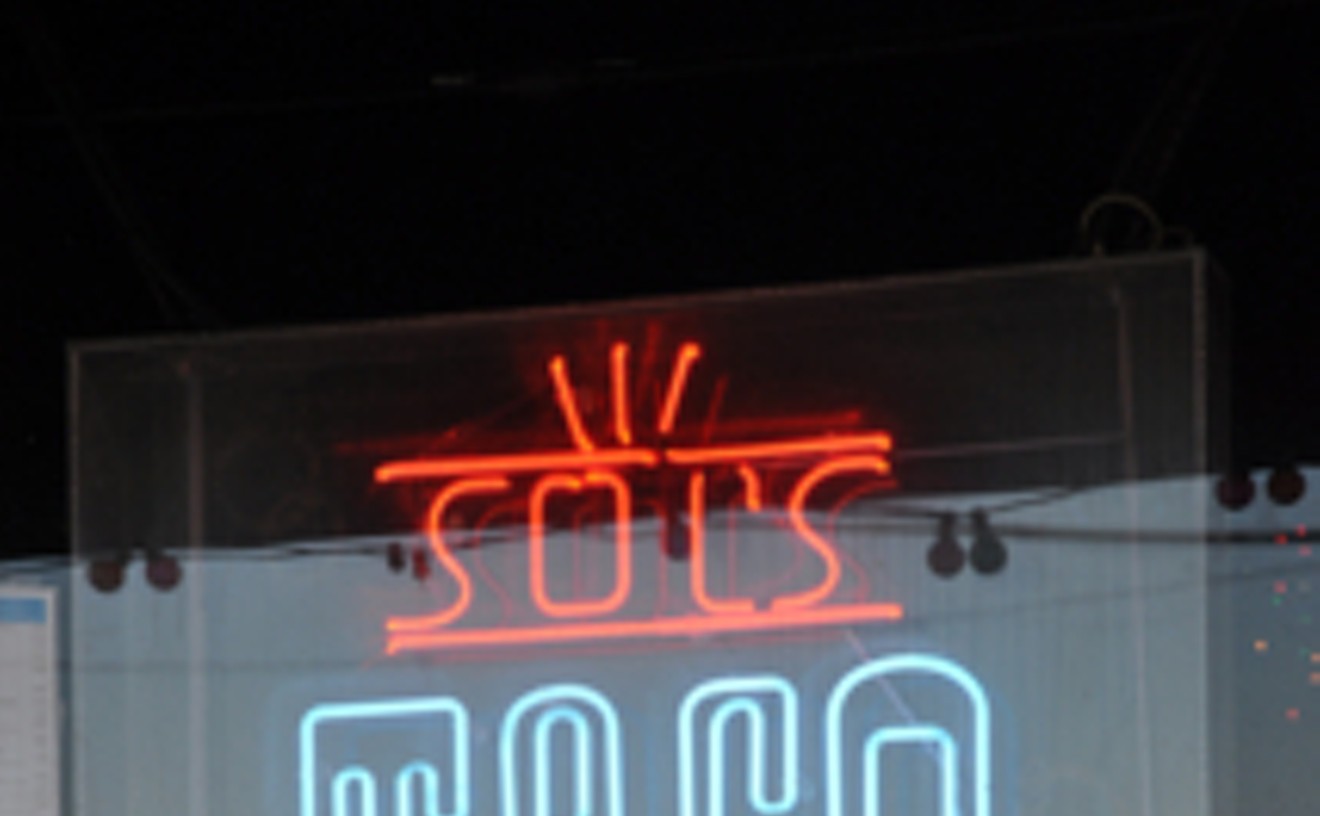 This is Texas, so it's understood that there are quite a few margaritas to be had out there. And before we went on this quest we were pretty accepting of whatever 'rita goodness was served to us. Then we walked into Sol's. To be honest, we weren't thinking Best of Dallas. We were just having some Mexican food with a friend and decided to imbibe. Our patient waiter discussed with us the merits of the top shelf and urged us to choose that over the basic version. A little suspicious of a possible up-sell, we went ahead. Bless that man! Sauza Conmemorativo and Gran Marnier provided an outstanding base for what our bartender concocted for us. It was light, not too tart, not too sweet, didn't burn the hair off our chest, and yet it sure as hell hit us about 10 minutes later. This top shelf schooled us in the finely prepared margarita. 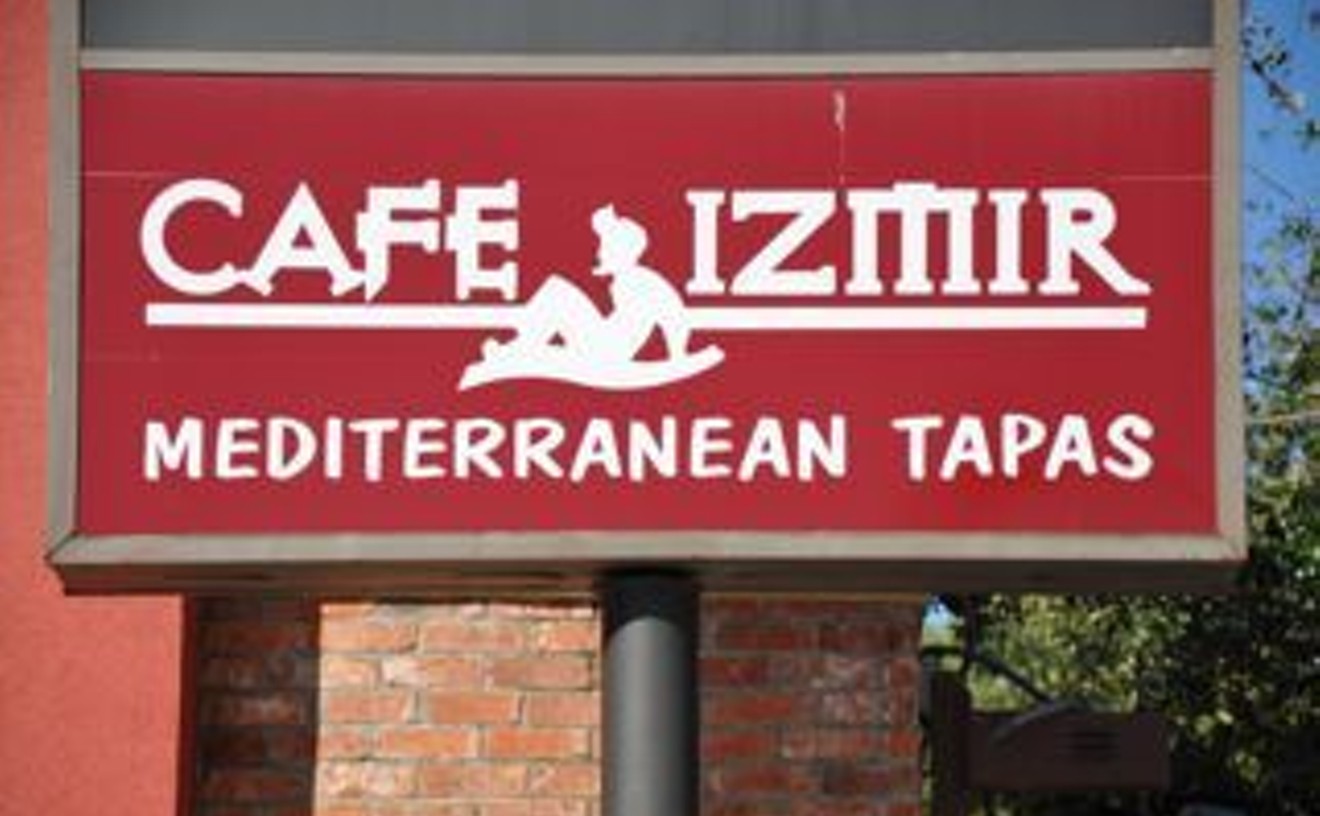 Part of the experience of the Izmir order is the personality of the husband-and-wife team (Mehdi and Faye Nazari, an uncle and aunt of the owners Beau and Ali) that usually answers the phone. Mehdi's got an amazingly accented voice that is welcoming and calming (for those of us who hate phoning in an order). And both he and Faye are fantastic at helping the undecided choose what to order. The chicken and arugula sandwich on marble rye bread is amazingly bold. Chicken schnitzel is a true specialty, and the cold mozzarella sandwich with basil and tomatoes is crisp, light and makes a perfect meal with the addition of a side Greek salad (the dressing, oh, the dressing). The Mediterranean fare is a top-notch delivery option, but plan to order before 9 p.m. As Mehdi always says, they'll have it there "in about 40 minutes, hopefully sooner." It's always sooner, and in the world of delivery, punctuality and ordering assistance along with spectacular food make Izmir Market and Deli truly the best. Don't forget to order a brownie; they're delicious and about as big as your face.

Best Place for General Tso to Chicken Out

It's Sunday evening, the lawn's mowed, laundry's done, the kitchen's clean and, frankly, why dirty it again? Pick up the phone and call the friendly man who remembers every customer (and we're convinced he's the super-nice delivery guy, too) and won't complain if you want a fountain drink instead of a canned one. While the Mongolian beef, fried rice and chicken lo mein are sure bets, there's a dish that's truly worth the caloric intake and financial splurge on takeout: General Tso's chicken. It's nothing short of delectable, with crispy bits surrounding tender chicken pieces in a sweet and spicy sauce (mind the demonic red peppers). There's nothing "general" about this chicken; it's so good we can't believe it arrives in Styrofoam. 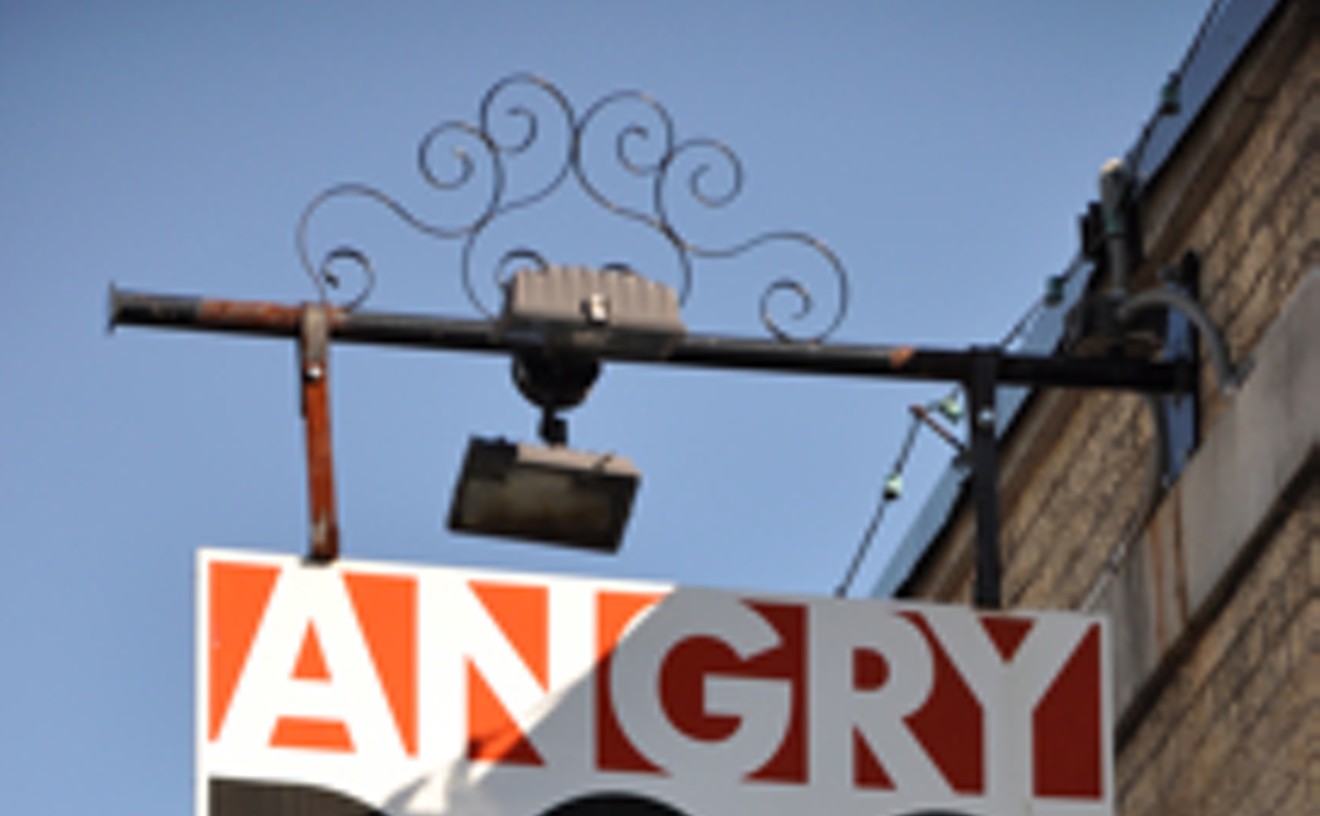 Dad says the best hangover cure is to take an aspirin before bed and another upon waking up, washed down with a Coca-Cola. That works for the headache and drunken-injury aches, but what about that pit inside screaming for sustenance? Enter the Angry Dog and eat away at the post-intox hunger with an Angry Dog cheeseburger, nachos or even The Natural if you're not real keen on the meat. This may sound like a bad thing, but the sodium content of a burger here is enough to force you into healthy hydration for the remainder of the day, and that's a good thing when the only liquid in your system is the kind others can smell emitting from the pores on your contaminated body. The waitstaff is helpful and deft at refilling drinks and maneuvering through the close tables and our burger-eating asses. Plus, if you subscribe to the "hair of the dog" system, the full bar can knock you out of hangover and into next week.

There's cinnamon roll French toast, French toast sticks, even stuffed French toast. All these things are great (usually "for a limited time") at some 24-hour breakfast joint, but the best French toast has no gimmick. It's thick, soaked instead of battered and thick, thick, thick. What better way to achieve such qualities than to use fresh challah (Jewish egg bread) instead of skinny little pieces of white bread? That's what the Bronx offers on its Sunday brunch menu, and we're sure Mom would be embarrassed to serve that skimpy Wonder Bread version after having a gander at this one. Two slices of thick, flavorful toast lie temptingly bordered by a pitcher of warm syrup, real whipped cream, strawberries and butter for use at the diner's discretion. One bite and the firm crusty edges give way to the tender heart of the challah, and Sunday morning magically fills with tasty bliss.

Raw beef in Texas is generally good for just one thing: grills. But what do you get when you slap raw beef with French rigor? One thing you don't get is freedom flanks. Another thing you don't get is modesty. Café C's menu, created by Frenchman and "C" owner Francois Fotre, boasts that its steak tartare is "simply the best." And its home of Little Elm, a mere mattress dimple in the stretch of bedroom communities hugging Lewisville Lake, is not a destination by any stretch. But 48 minutes of drive time seems a reasonable price for this mound of raw meat. It's not so much the rich meat--urged into sublime flavors with a spicy dressing of egg yolk, mustard, cayenne, chopped capers, paprika, red wine vinegar and a little lemon--that draws. It's the substitution of traditional toast points with house-made pommes frites (otherwise known as freedom fries). Why spread raw meat on toast when it's much easier and tastier to gouge a pinch of ground carnality with a fry tip?