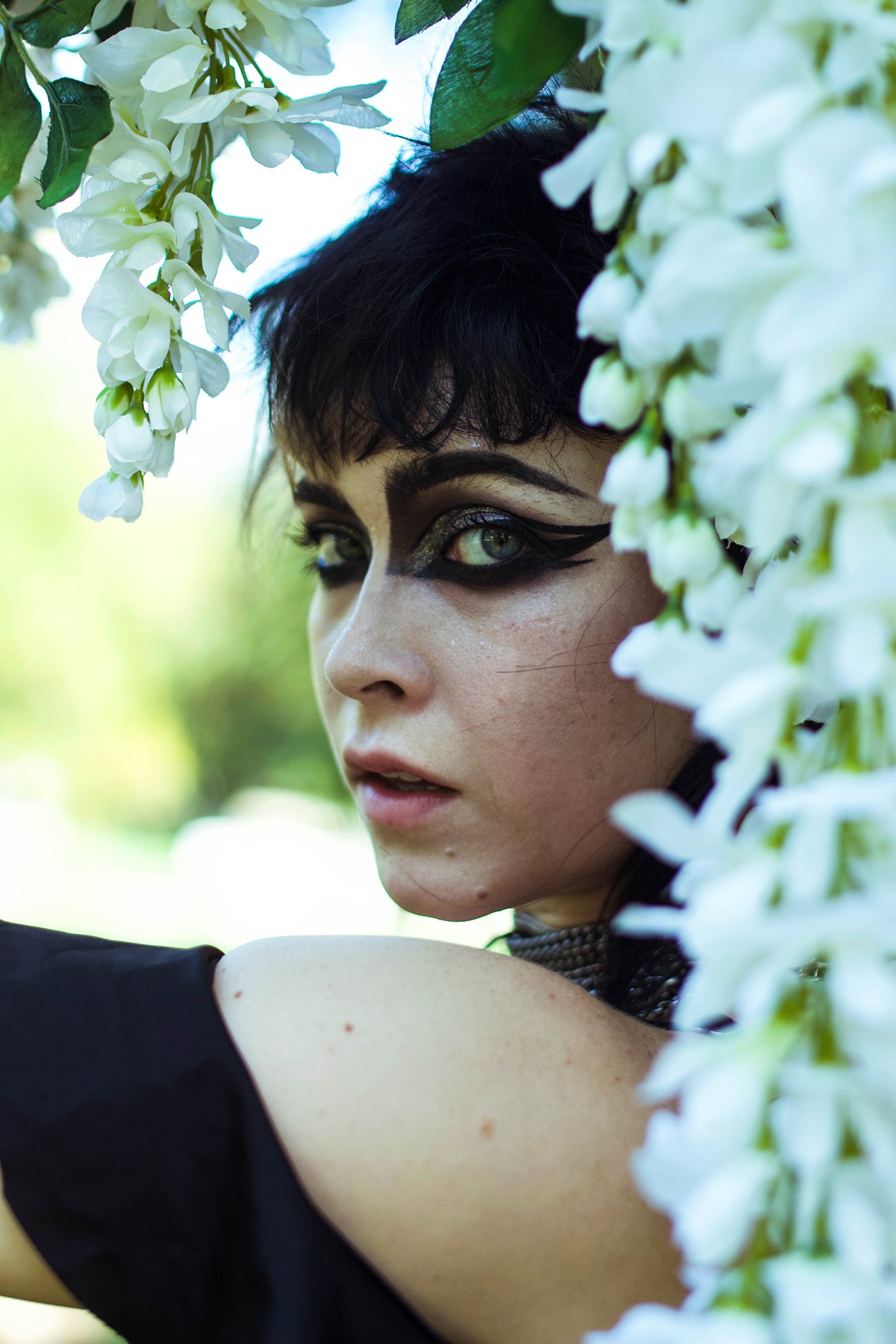 Leah Lane of Rosegarden Funeral Party Erin Devany/All Hallows Productions
Picture a dark, quiet street. Neighbors loiter here and there in the sleepy neighborhood as you stroll toward the house in  the middle of a Garland block with a blood-red porch light and a glow emanating from the windows. Enter the dim crimson and ebony coven to find all manner of meticulously curated knickknacks and bric-a-brac from across decades, and pour yourself a drink while you nod along to The Cure.

At the helm of the party, manning the turntables, stands Leah Lane, grinning and dancing, drinking red wine and trying to greet everyone without missing the next transition. It doesn’t work. She sprints back to the tables from hugging someone across the room only to miss it by a beat. She laughs it off, and the Goth times roll on and on.

Lane, the dark yet radiant hostess, is Rosegarden Funeral Party's bandleader. More than a gifted vocalist nominated for the second year in a row for a Dallas Observer Best Female Singer award, she is also a mesmerizing personality. Wherever she goes, Lane is head-to-toe in full garb as a rock 'n' roll queen. Her dramatic makeup and rebellious outfits evoke the visage of Siouxsie Sioux and, when coupled with her fervent stage presence, make her a photographer's dream. Though she is a studied musician and gifted songwriter, her true aspirations are to inspire unity and compassion. 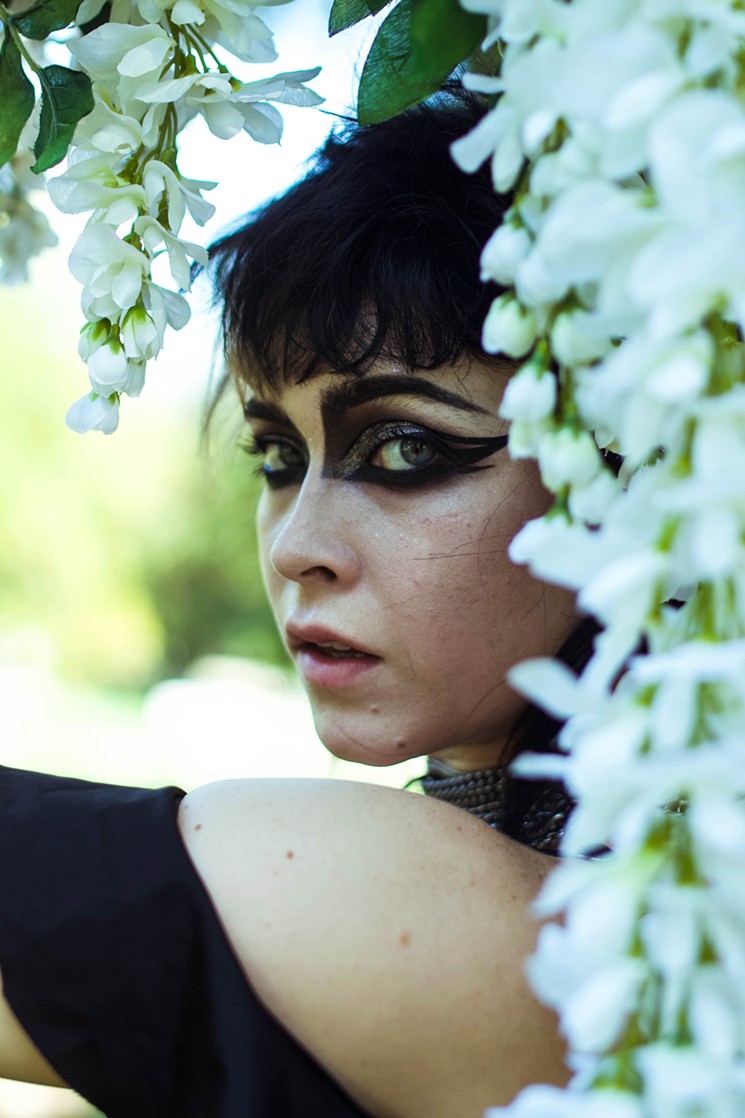 Leah Lane of Rosegarden Funeral Party
Erin Devany/All Hallows Productions
Venturing out into the band's backyard, between the French windows looking out on the porch and the peeling shed ensconced in thick ivy, one finds artists displaying their works and conversing with the Goths floating from house to yard and yard to house. It’s hot. The dressmaker, sweating in her corset, is sitting on the ground stitching a collar onto a top she made out of some bike shorts to wear instead. One of the vendors, artist Jet Smith, is selling paintings of Marilyn Manson, baby pigs in a jar and other taxidermy decorated so fancifully that the effect becomes comedic, like animal skulls trimmed with ribbon. They're the kind of works of art that fit right into Rosegarden's world. 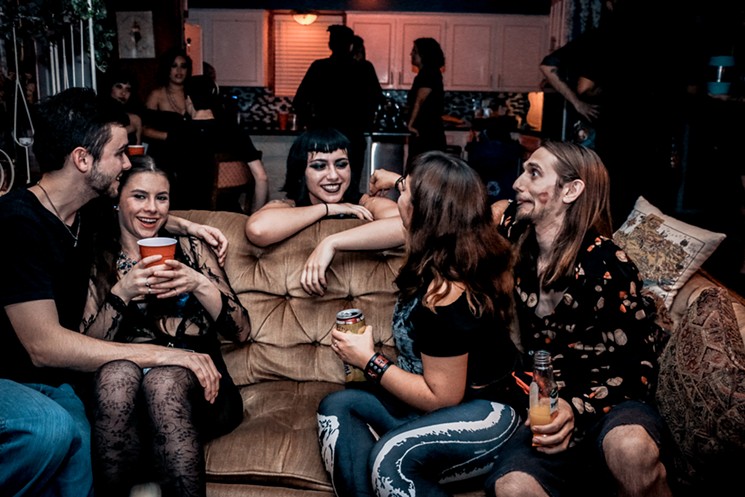 OBITUARY, the party, at the "funeral home"
Vera Velma Hernandez
Across from her, punk photographer Vera Velma Hernandez recounts stories of her many photographic conquests, from blood-spraying front men in Austin bars to risky escapades in abandoned orphanages and asylums, her black-and-white trophies laid out before her in a neat grid of shiny black frames and glass.

Another photographer, Erin Shea Devany, sits behind a plastic table kitty-corner to Velma. Her images conjure ghastly characters. Some with extra arms, others sans faces, all disturbing and beautiful.

Behind you, a group plants a folding chair in the middle of the yard, forms a circle and administers a haircut by phone light to a willing party.

This was the scene at the first of a dozen or so parties Rosegarden Funeral Party has planned this year. They called this one OBITUARY. It was a stunning tour de force of new wave, Gothic art and good vibes.

If you didn’t already know, this is Rosegarden Funeral Party’s last year in Dallas. The trio of post-punk Goth- rockers are gearing up to head west, their red and black hearts set on the City of Angels, but not before they have one last yearlong hurrah. It’s been an eventful one, to say the least.

Lane and the rest of the crew just signed a one-year lease on the five-bedroom house where they hosted OBITUARY. They’re calling it the Funeral Home. Once the lease is up, Rosegarden will pack its bags and move to Los Angeles.

Nearly three years after battling through the rocky breakup of Moon Waves and subsequent re-emergence as Rosegarden Funeral Party, the band has carved out a place in the heart of the Dallas Goth scene with its over-the-top stage presence, powerful music and dedication to its fans.

The band is just about ready to release its first studio album, MARTYR, teasing its release in an Instagram post announcing that the album they recorded with Dallas-based label Moon Sounds would debut before the end of November.

“MARTYR is the Rosegarden you know live," Lane says. "It’s really phenomenal that people in other states know lyrics to those songs, and they’re not even released. They know them from watching live YouTube videos of us.

“We’ve hit roadblock after roadblock trying to get it out to everyone, and now we’re literally just setting all of the roadblocks on fire. … We’re putting our faith in the record to do what it will do and what it is meant to do.”

On top of logistical roadblocks to releasing their music, Rosegarden is recovering from a tough split with longtime member Mikka Vanya Brightheart. Over the last four months or so, tensions between him and the band had been building. Recently, they boiled over, ending in a parting that has left the remaining members tired and sad. With so many changes approaching already, it’s a nerve-wracking time for the band, but Lane says they’ve found solace in the Funeral Home.

“I think the house is saving us,” says Lane (vocals, guitar, synth). “I think Dylan (Stamas, percussion), Wil (Farrier, bass) and I being together is saving us. We’re family. And I think that with the Funeral Home and the record coming out and moving forward with the changes we’ve made … the future for Rosegarden has never looked more promising.”

The band has spent the last few weeks moving into their new home, painting everything red and black and carefully arranging their antique odds and ends to create their dream home and the perfect place to host what may be Dallas’ only true Goth night.

“I felt that Dallas has been missing a traditional Goth night for a long time, and I wanted to start one,” Lane says.

To that end, the band will be opening their home once a month to host a Goth night, where people can come dance, mingle and share art with one another.

In a city and a region where alt-cultures are often trivialized or minimized, Rosegarden wants to celebrate and create a space for the Goth scene. In addition to a documentary being made by Devany — to be released at the end of Rosegarden’s time in Dallas — the band’s photographer and close friend, Velma, will be capturing each party through her lens, gathering the images and notes left in the guest book into a book to immortalize the year of the Funeral Home.

The goal of their goth nights, she says, is to leave as much of a mark of kindness and love as they can before bowing out of Texas.

And with the first of 12 under their collective studded belt, they feel confident they’re well on their way to doing just that.

Says Lane, “It’s only going to get bigger from here.”
KEEP THE DALLAS OBSERVER FREE... Since we started the Dallas Observer, it has been defined as the free, independent voice of Dallas, and we'd like to keep it that way. With local media under siege, it's more important than ever for us to rally support behind funding our local journalism. You can help by participating in our "I Support" program, allowing us to keep offering readers access to our incisive coverage of local news, food and culture with no paywalls.
Make a one-time donation today for as little as $1.