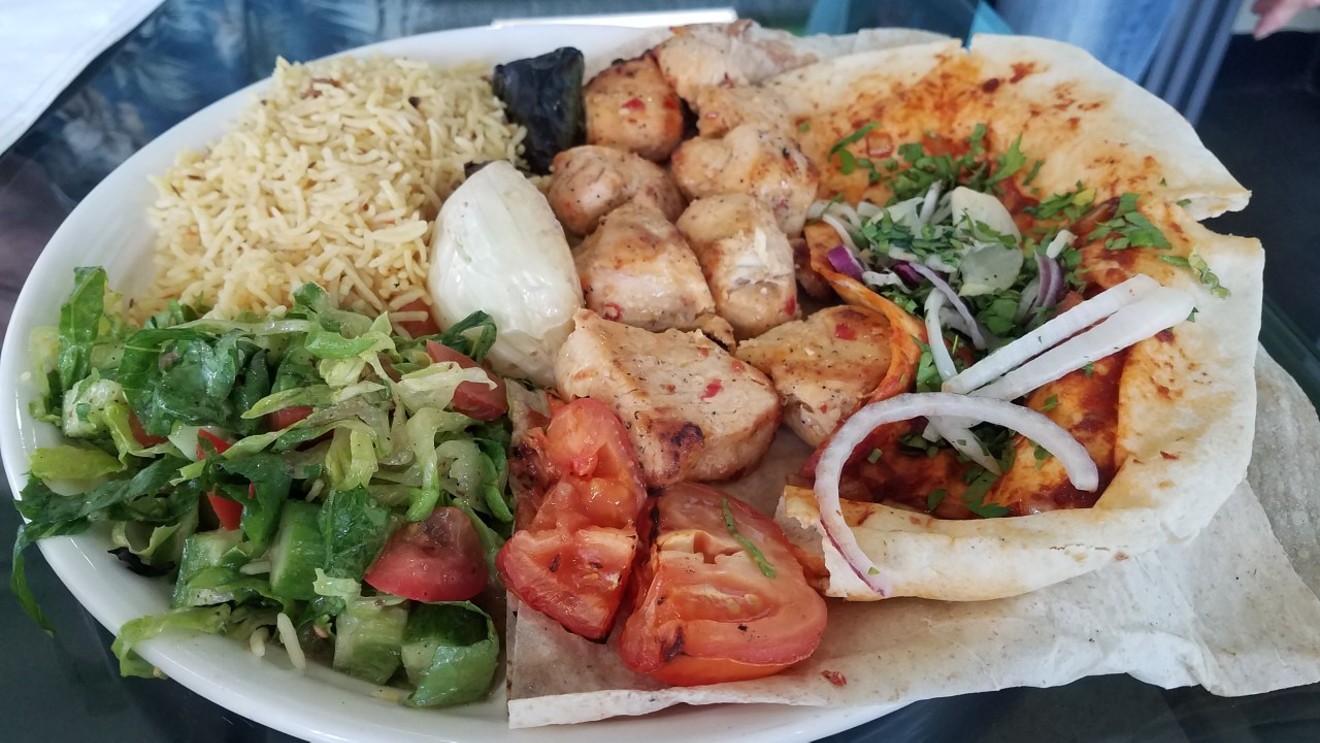 Chicken shish kabob Nick Reynolds
Arabica in Richardson opened its doors in May for an unofficial soft launch. That “soft” opening has become more of a stampede. The restaurant already has more than 200 Google reviews and is currently sporting a rating of 4.9 out of 5.0.

Waleed is the eldest of the Abo Alhaija children and was our server on a recent visit. He told us he arrived in Dallas with his brother Mohammed in 2008. A decade later their father, Khaled, mother, Souhad, and sister Farah joined them.

Another addition to the family would follow a few years later: this restaurant, Arabica.

“My father had a vision to establish something different than most of the other Arabic Mediterranean restaurants in the area by gathering different dishes from different countries in the Middle East,” Waleed says. “We wanted to attract all people from different cultures and backgrounds, which is what has happened in the first two months.”

The space is open and airy. Spits are in view, rotating chicken and beef shawarma. A rotisserie spins, loaded with chicken. They make all of their spices in-house here, none are prepackaged or store-bought. An eye-catching neon sign on the wall reads “Ἀla Rasi," Arabic for “anything for you." Waleed chatted with us as if we were guests in his own home while jotting down our order. 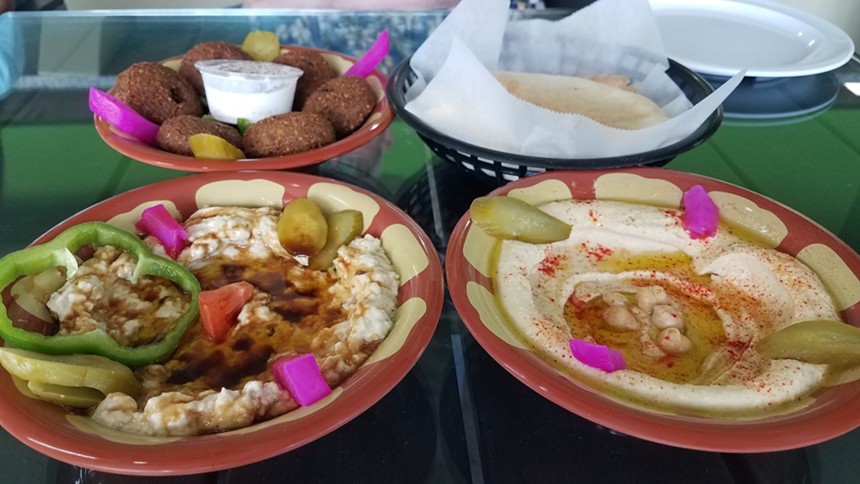 Clockwise from top left: falafel, fresh pita, hummus and mutabbal
Nick Reynolds
We started with the hummus, mutabbal (eggplant dip) and falafel, all reasonably priced at $4.99. Hummus, which is served with a house pita bread, was rich, creamy and smooth, while the mutabbal had notes of smoky eggplant with a hint of sweetness. The falafel was crunchy on the outside, soft on the inside and came with tahini sauce.

Mandi chicken over rice
Nick Reynolds
For our main course, we went with the mandi chicken on a fluffy bed of basmati rice. It's $14.99 for a half chicken and is easily shareable among two. The aromatic, biryani-esque mandi was vibrant in a hawaij seasoning (a blend of Yemeni spices) and garnished with small, golden fried onions that we couldn’t get enough of.

We also had the tender chicken shish kabob served over a nearly paper-thin pita bread that soaked up the sauce for a nice touch (see photo at top).

To cap the evening, we ordered a round of Arabic coffee, which served as a potent ending to a great meal.

Arabica, 1403 E Campbell Road, Suite 101, Richardson. Open 11 a.m. – 10 p.m. Monday – Thursday, 11 a.m. – midnight Friday, 12 p.m. - 12 a.m. Saturday
KEEP THE DALLAS OBSERVER FREE... Since we started the Dallas Observer, it has been defined as the free, independent voice of Dallas, and we'd like to keep it that way. With local media under siege, it's more important than ever for us to rally support behind funding our local journalism. You can help by participating in our "I Support" program, allowing us to keep offering readers access to our incisive coverage of local news, food and culture with no paywalls.
Make a one-time donation today for as little as $1.