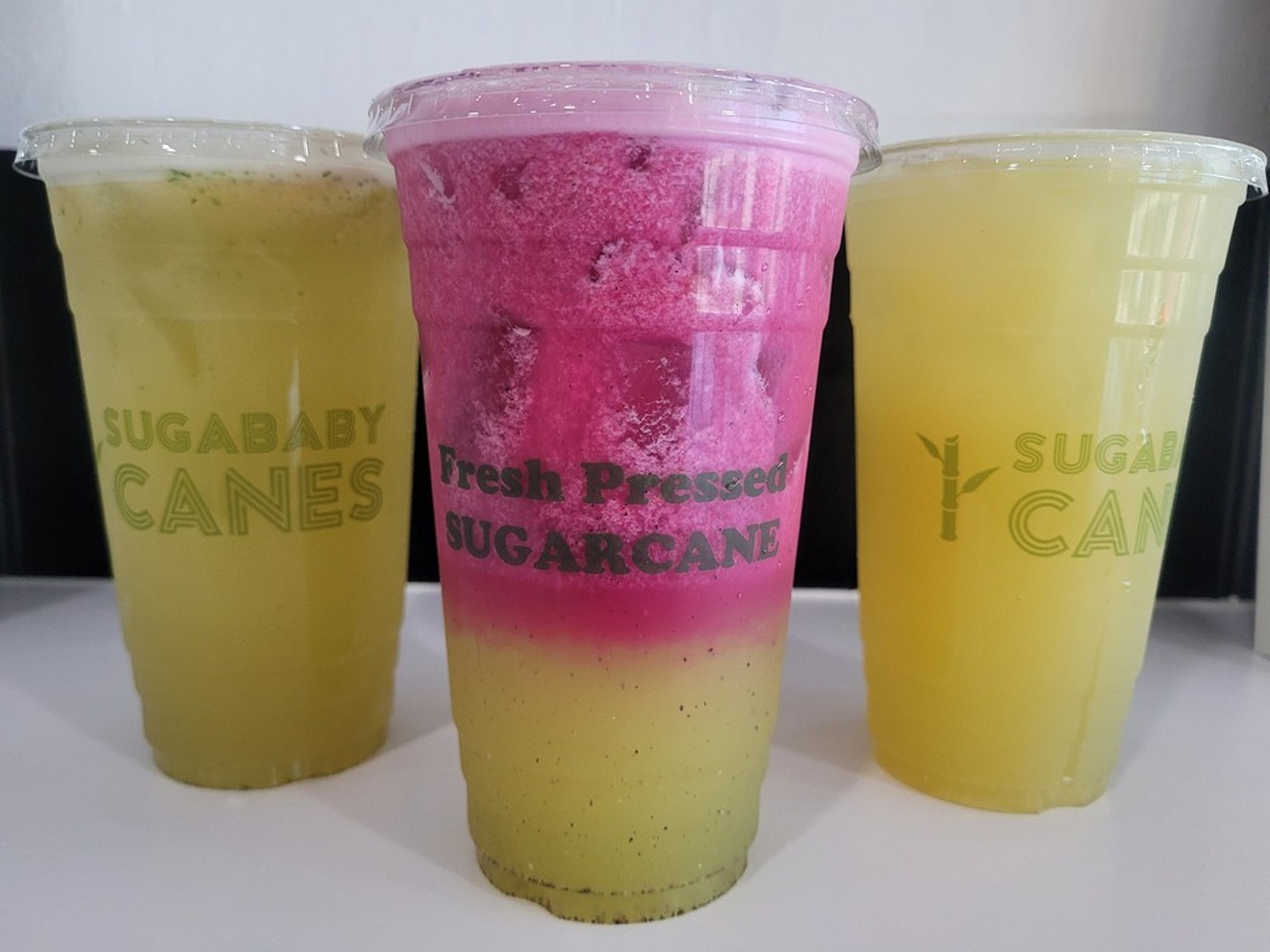 Some of the popular options include the mojito, dragon berry and ginger cane. Didi Paterno
Sweet drinks made from pure sugarcane are rising in popularity across the country. Cultures in sugarcane-growing countries such as Mexico, Brazil, India, Pakistan, Egypt, the Philippines and Vietnam, among others, have been drinking this refreshing and healthy beverage for years.

Drinks made with pure sugarcane are sold across a number of shops at Asian strip malls in North Texas, but none have offered it exclusively until Sugababy Canes in Rockwall opened its doors late last year.

After working as a mechanic for BMW for 16 years, Paul Truong wanted a change. His family packed their bags, moved from Los Angeles to Rockwall and opened Sugababy Canes. He drew inspiration from his own childhood and culture for this spot and seeks to create a standout business in an ocean of coffee shops and bubble tea places. 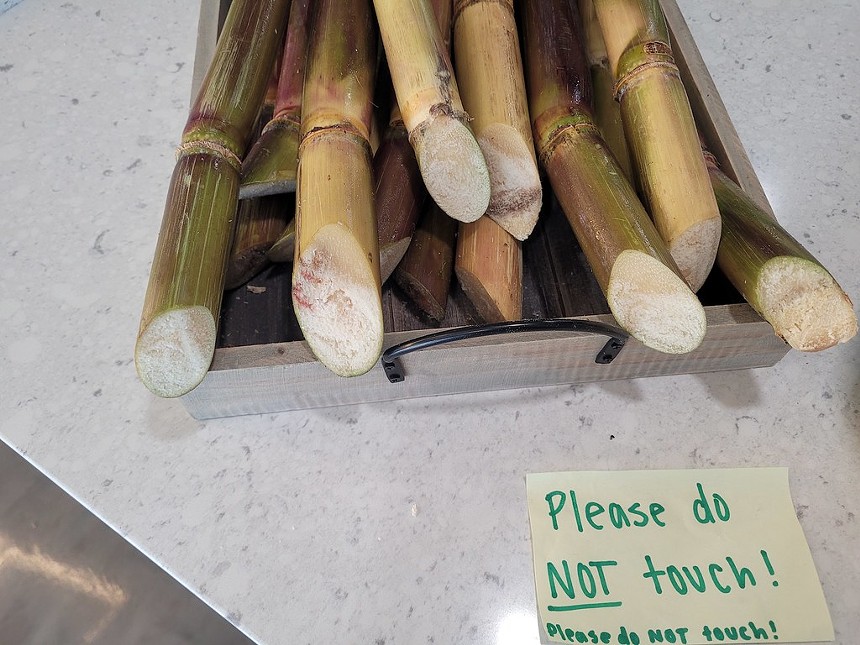 Didi Paterno
At his store just off Interstate 30 in Rockwall, a tray of sugar cane is displayed on the counter. Further out from the Asian hubs around Dallas, Truong says he's had to introduce his product to the local community; many have no knowledge about it prior to walking into his store. He's always happy to give out samples of pure sugarcane juice.

For his drinks, Truong starts with fresh, never frozen sugarcanes — green, red or a hybrid, wherein each gives a different nuance in sweetness and flavor — from Florida. On top of that, Truong prefers to painstakingly skin the sugarcanes before juicing. “It’s an extra step, but I do believe it is worth it,” he says, echoing a sign inside the store “Good things take time.”

Sugababy Canes doesn't use any syrups in its drinks. Truong buys fresh fruits and produce — selecting the best that he can access — and cuts them up to be blitzed with sugarcane juice. 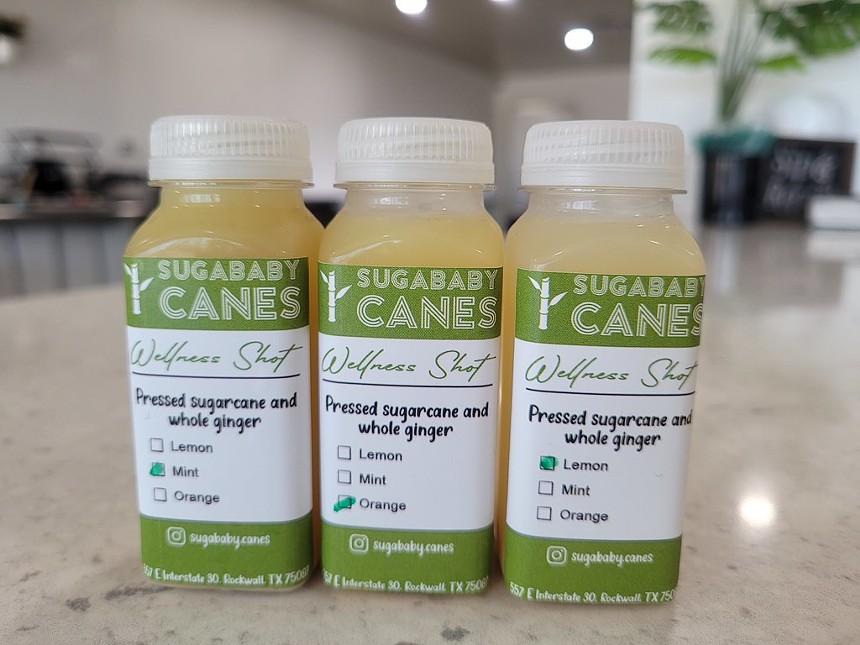 Ginger shots. (Shots! Shots! Shots!)
Didi Paterno
Customers can build their own drinks with sugarcane as the base then add coconut water or pennywort, a medicinal herb, or fruit. If you’d rather leave it to the experts, Sugababy specialties are the way to go. A tangy Sugababy mojito with orange, lime and mint is a popular choice. Dragon Berry, made with dragon fruit and strawberries, and Wild Berry made with a blend of blueberry and strawberry are also both popular.

If a kick of caffeine is what you need, go for one of their tea blends with either oolong, jasmine green or lychee black tea mixed with sugarcane juice.

If you’re still uncertain about any of those beverages, their ginger shots are a great gateway drink. This potent mix or whole ginger and lime, orange or mint, is mixed with sugarcane. 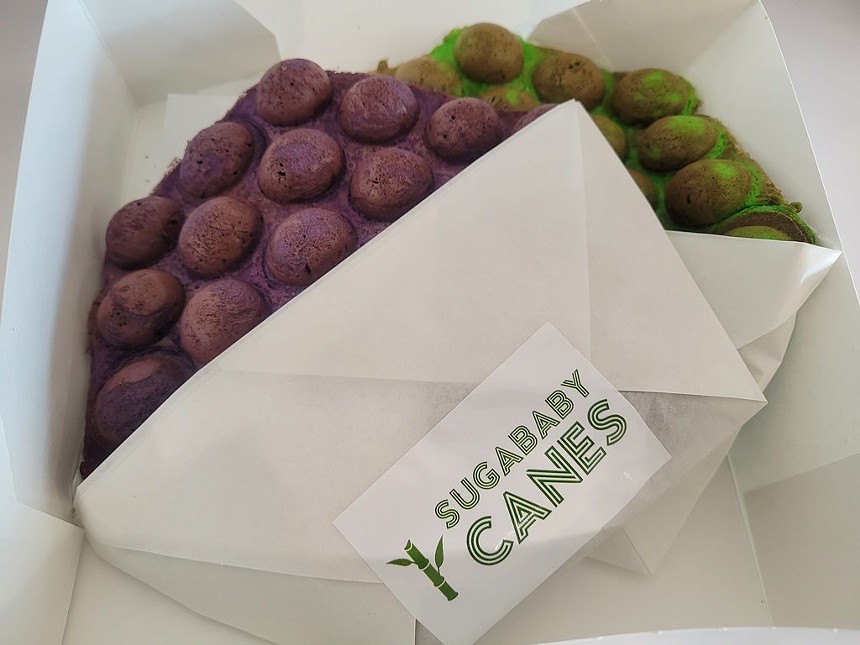 Sugababy Canes, 557 E, Interstate 30 (Rockwall), 11 a.m. to 7:00 p.m. Monday through Thursday, 11 a.m. to 8 p.m. Friday through Sunday
KEEP THE DALLAS OBSERVER FREE... Since we started the Dallas Observer, it has been defined as the free, independent voice of Dallas, and we'd like to keep it that way. With local media under siege, it's more important than ever for us to rally support behind funding our local journalism. You can help by participating in our "I Support" program, allowing us to keep offering readers access to our incisive coverage of local news, food and culture with no paywalls.
Make a one-time donation today for as little as $1.