What Exactly is "Local" Beer? Well, It's Complicated.

Lauren Drewes Daniels
D.G. Yuengling & Son is America's oldest craft brewery, having first poured frothy pints back in 1829 in Pottsville, Pennsylvania. Since that time they have remained a family business, passed down through generations, always father to son, until the fifth generation of all daughters who are now at the helm. Despite being the largest craft brewery by volume of sales in the United States, this brand has never been sold in Texas.

But that will all soon change. Last year the brewery formed The Yuengling Co., a joint venture with Molson Coors, and sometime this year will be brewed at the latter's Fort Worth facility and distributed throughout the state.

With a cornucopia of local breweries, one might feel a pang of Main Street guilt when imbibing a beer made in another city. But, this particular venture made us stop and think: What exactly is "local?" If it's local ingredients, then we’ll have water. If local means it employs local workers, then the net is wider.  So, if Yuengling is brewed here and helps pad paychecks of North Texans, then where does that leave us? Also, some of the first craft breweries in Dallas have been sold to larger companies, so what are we supposed drink?

Follow the Money (Maybe)
We first put the question to local brewer Matt Pennington, who has worked from Armadillo Ale Works, Deep Ellum Brewing Co., Oak Highlands and is now with Windmill Craftworks in The Colony. When asked specifically about Yuengling stimulating local job growth, he counters, "The teams that have already been in place in Fort Worth just get the opportunity to bring that tradition to Texas. I like to consider the brands that have their own establishments, created new jobs, and have given us the diverse beer culture that makes D-FW what it is today as my 'local' options."

We also asked Brian Brown, who runs the website Beer in Big D. (Actually, first we asked Micheal Peticolas of Peticolas Brewing for a professor-level beer drinker and he sent us to Brown.)

From the economic perspective, Brown says money spent at home stays at home.

“Local breweries create local jobs, and the employees working there circulate money earned back into the local economy,” Brown says. “It's here, though, where you find a dividing line as to what people see as a ‘local’ beer. In the cases of corporate ownership, not all of the money stays at home. Rather, it goes up the management ladder and into the hands of people based outside the state. The beer at those breweries may be locally brewed, but for many, it falls short of being truly ‘local.'”

This brings us to the nuanced intersection of local beer and out-of-town owners: Four Corners Brewing Co. was one of Dallas’ first craft breweries, opening in 2012.

“We got purchased by Constellations Brands [in 2018] and that earned some knocks against us,” says Steve Porcari, a founder of Four Corners. “Now for some reason, because we’re not owned by a Texas company, we’re not local to some, even though we’re in the same facility and we’re run by the same employees.”

Porcari then offers a significant point about economies of scale: He was able to give his workers raises and health insurance after being purchased by Constellation. Additionally, they were able to bring in new equipment and upgrade the brewing process. None of us would argue against more money or health insurance for those who provide us with local craft beer. 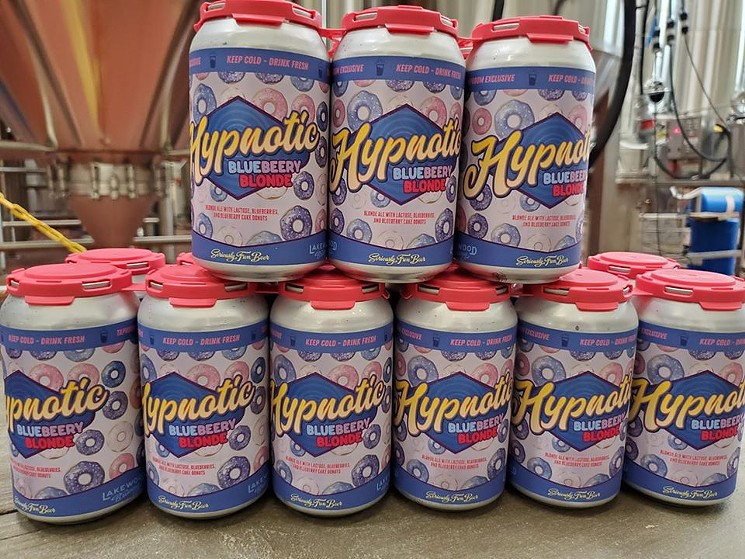 Lakewood Brewing partnered with local doughnut purveyor, Hypnotic, last year for a Homer Simpson-esque beer.
courtesy Lakewood Brewing Company
Location
Brown also says the definition of "local" is complicated. "For me, I think it's too simplistic to just say a local beer is one made by a local brewery. Local shouldn't only be a question of geography. Miller Lite was first brewed in Fort Worth, but does anybody actually consider it a local beer?“

Wade Wadlington, founder and owner of Division Brewing in Arlington, built his business with the help of his local community. Volunteers poured the first beers and it was a big day when his head brewer was able to quit his day job and work at the brewery full-time. He rebuffed outside investments early on to make sure no one else steered the ship.

“Local beer is made by your neighbors,” Wadlington says. “They live in your city and their kids go to schools in that city.”

Collaboration
Brown attributes community involvement as a big part of being local — supporting charities and creating social events. Collaborations with other companies are also crucial as is the support of local artists and musicians.

“Specialty ingredients, incidentally, are what tend to open up avenues to collaboration, something we see when brewers team up with local spice makers, chocolatiers and coffee roasters to identify products for use in the creation of new and unique beer recipes,” Brown says.

Corey Pond, the founder of The Common Table,  the first bar in Dallas to serve only craft beers on tap, thinks locally owned means a lot more than locally brewed; although locally brewed matters when it comes to freshness.

“Hops fade quickly, so local matters a lot on hoppy beers,” Pond says. “But you can get a local beer that’s old still. Local has a built-in advantage in the freshness game. Freshness is of more importance in craft beer versus non-craft, generally speaking, due to the types of ingredients. [There’s] always exceptions, but that’s a general idea.”

Tasting Local
Back in 2018, the Observer's former food editor, Beth Rankin, wrote a piece titled, “A Reader Asks: Has Blood & Honey Changed Since Revolver's Buyout?” She was referring to the Granbury brewery’s flagship beer, which was a game-changer locally. Single-handedly it turned a lot of Bud Light drinkers into craft beer connoisseurs.

A reader commented that he thought the beer tasted different after being sold. Rankin tracked down their head brewmaster, Grant Wood, and asked, "Is it different?" Wood explained that sometimes mother nature has a say in what beer will taste like. He said they'd only made a few tweaks to fix nature's interference, but also offered, to Pond's point, they can’t control freshness and storage conditions when it comes to distribution.

Herein lies a key difference; when a local brewery posts on social media that they just canned your favorite beer, you can literally drive to that brewery and grab a crowler or seven.

“So, in a nutshell, I would say ‘local’ beer starts with independent, locally owned breweries. Beyond that, it's a measure of how well you represent yourself and your community through the activities mentioned above,” Brown says.

But, then health insurance is nice too. Seems there are different paths to "local." It's complicated.
KEEP THE DALLAS OBSERVER FREE... Since we started the Dallas Observer, it has been defined as the free, independent voice of Dallas, and we'd like to keep it that way. With local media under siege, it's more important than ever for us to rally support behind funding our local journalism. You can help by participating in our "I Support" program, allowing us to keep offering readers access to our incisive coverage of local news, food and culture with no paywalls.
Make a one-time donation today for as little as $1.