13 Fun Breweries and Brewpubs to Visit in Dallas 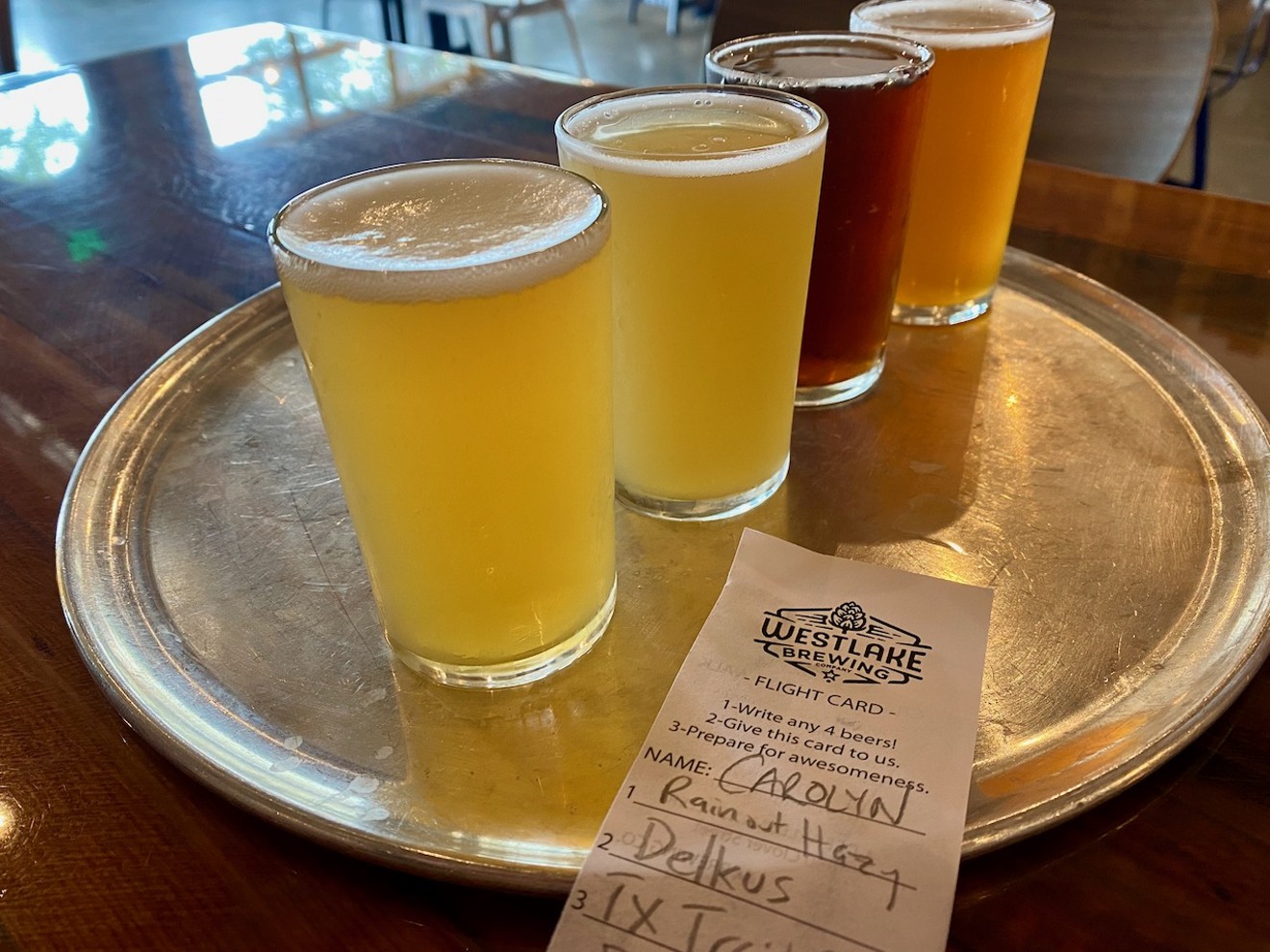 A flight at Westlake Brewing Lauren Drewes Daniels
The local beer scene in Dallas has grown over the past several years despite huge challenges in the last two. Brewers are turning out great products and expanding their entertainment as well.

While getting here wasn’t fun, to-go beer and the addition of food programs and partnerships have made breweries “things to do” places that are once again a fun way to spend a day. Check out these 12 Dallas breweries and brewpubs that make great hangout spots.

This long-anticipated spot opened this summer at Mustang Station bringing together brews from Cedar Creek Brewery in Seven Points and food from LUCK, a beer-centric restaurant that closed in Trinity Groves in 2020. There’s big energy at Mustang Station, and Cedar Creek Brewhouse is ready to harness it. Whether you stop by for lunch specials or brunch and football on the weekends, there’s food and drink that’s bound to satisfy.

Serving as host for the recent North Texas Craft Beer Chili Challenge and Grilla Fest, their events calendar shows no signs of slowing. December brings twelve beers of Christmas and a Homie Brew offering with a chance to brew your own beer and have it served on tap in the brewhouse. Stay up to date on all the latest activities when you follow their Facebook page.

A bright spot in the Medical District, Celestial Beerworks has been grabbing the attention of local beer enthusiasts with their sours, hazies, stouts and IPAs since they opened in 2018. With artwork in the brewery (and on the cans) that’s bound to catch your eye, founders Molly and Matt Reynolds have created a space that’s friendly and fun as well.

With food on demand from Maple Landing delivered through 2nd Kitchen, you can while away the hours any time without having to think about where to eat. Saturdays are exercise-focused with a rotating schedule of HIIT and Sip, Hip and Hops, Stretch and Sips and Pilates and Pours. Trivia nights and Complicated Discourse round table discussions offer unique opportunities to connect with others on another level. Follow Celestial’s Facebook page for updates on beer releases and upcoming events.

Deep Ellum Brewing has been through some changes over the years, but for many of us, Dallas Blonde and Blind Lemon still hit the spot. It’s even better when you drink it at the brewery, which has frequently become a music venue befitting the local neighborhood. The events tab on their Facebook page is loaded up with things to do from trivia nights to music bingo and Saturday brewery tours.

At Four Corners, you’ll find an indoor space with a quirky vibe in a historic building, murals mirroring Cristi Brinkman’s distinctive can art and an expansive patio with string lights. Any of those options is a fine place for a date night or a gathering with friends.

Yet regulars know how to make the most of their time at Four Corners, where the first weekend of the month is something special with a Viernesito Night Market on Friday night and La Cruda Hangover Brunch on Saturday. Other happenings include vintage meets, social rides, Geeks Who Drink trivia, and Loteria Live. The Four Corners Facebook page is the place to be to find out what’s happening and when.

There might not be a better brand representative for the “Made in Oak Cliff” tagline than Oak Cliff Brewing Company. Nestled inside the historic Tyler Station building the brewery and taproom overflow into a welcoming outdoor patio on the edge of the Bishop Arts District. They host paint nights (recently a Dallas Cowboy-themed painting), lotería and recently hosted a local market with food, vintage goods and DJ Sober spinning tunes.

It’s been a bit since Jacob and Lindsay Sloan moved their homebrewing hobby from their driveway to a little taproom in Lakewood. A move to a larger space was inevitable, but the road to their new space near Love Field was quite a comedy of errors.

Luckily, though, they’re settled in (since this summer) with remarkable food and an ever-changing weekly rotation of small-batch beers. That weekly rotation necessitates a Clean Slate Wednesday, and Pub Trivia Tuesdays are fun too. Visit the On Rotation website to check out their food and beer menus as well as a schedule of upcoming events.

Outfit Brewing can be a little hard to find. It’s worth the effort, though, for their mix of ales and laid-back outdoor space. Their social calendar includes bike (motorcycle) nights, car shows, Hopp’n Fridays and more. The Hopp’n Friday nights bring together beer, live music and food truck fun.

This is a terrific place to pop in during the holiday season since they’re an official drop-off location for The Texas Toy Run. Bring new unwrapped toy donations and $10 gift cards to big box stores for children being served at Metrocare Services and My Health My Resources of Tarrant County.

Peticolas nailed to-go beer with a drive-through in 2020 and it always was (and is again) a popular spot to bike to and pick up some brews to go. They’ve racked up awards year after year for their beers including a silver medal for their Scottish Ale (Great Scot!) in the 2021 United States Open Beer Championship.

Still, their social side shouldn’t be overlooked. Their Social Retro Video Game Night has Jackbox trivia, Mario Kart 64, some serious Rock Band karaoke and more. Monthly Running Club Social Run/Walk gatherings have food and beer stops along the route you can tackle at your own pace or run with the group.

Get to know both the beers and the social side at one of their open house tours the first Saturday of each month, or join them to celebrate their 10-year anniversary in January.

Whatever you want to drink, you’ll find it here with more than 15 Steam Theory brews on tap, wine, cocktails, whiskey and more. Nosh on a wide selection of appetizers, sandwiches and signature pizzas in an expansive indoor space or on the heated patio. The Monday through Friday happy hour from 4:30 to 6:30, aptly named Beer:30, is a great time to sample multiple dishes and brews, or you can order a beer and wing flight from the anytime menu.

Beer and trivia is a great combination, but if you’re not into team sports, you can opt out of their The Office trivia and grab a board game to play with friends.

If you’ve never been to a Texas Ale Project release party, you’ve been missing out. The (heated) beer garden and TAP room are the perfect backdrop for live music and games like cornhole as well as a comfortable hangout spot when there’s not a party going on.

The team here plays to a theme like no other with seasonal beers like the Cotton Candy Pilsner for State Fair of Texas season, Oaty McOatface stout in the fall and The Caucasian, a Russian stout for winter (because The Dude Abides.) Follow Texas Ale Project’s Instagram or Facebook page to keep up with the latest releases and fun events.

Plano’s first brewery picked a prime spot when they opened at The Boardwalk in Granite Park in 2018. It's got a West Coast vibe with Texas-brewed beer with indoor and outdoor spaces.

In addition to its own brand, Union Bear also has more than a dozen guest taps, about half of which are from Dallas area breweries. The beers offered are perfect for pairing with chef-driven food, which includes fish and chips, mesquite-grilled quail, Brewpub Udon and an extensive menu of snacks and shareables.

Vector Brewing has earned a reputation for its variety of brewed-on-premise beers, scratch-made pizzas and brunch. But a busy schedule of activities also makes it a great place to wind down (or wine down because they have wine) or get wound up with live music, drag shows and other events.

The patio is dog-friendly, and the whole place is kid-friendly until curfew at 8 p.m. Their weekly Tuesday night trivia from Monotone Trivia has coaster-throwing tie-breakers at host "Jorshy." It won Reader’s Choice for Best Trivia Night in the Observer’s Best of Dallas, but that’s just the start. Vector also hosts date nights, beer dinners, cider dinners and several unique events that repeat annually. Check their events calendar or Facebook page for all the latest.

The taproom at Westlake Brewing, along with a large outdoor patio, was designed to be a community affair.
Lauren Drewes Daniels
Westlake Brewing
2816 Commerce St.

Westlake is run by drinkers with a running problem. They host a social run that starts at the brewery on Wednesdays evenings at 6:30 p.m., followed by trivia (because sweaty trivia is the best trivia). On Saturday mornings they have free brewery yoga out on their spacious courtyard. If you need a snack after that run or downward dog, try their made-when-ordered Hugenormous soft pretzel.

This is a fun space with a strong local community vibe. They have several different areas to hang out with your own group or you can easily break beer with others. That pretzel though. Tuesdays at 7 p.m. they have music bingo. Be sure to follow their Facebook page for updates.
KEEP THE DALLAS OBSERVER FREE... Since we started the Dallas Observer, it has been defined as the free, independent voice of Dallas, and we'd like to keep it that way. With local media under siege, it's more important than ever for us to rally support behind funding our local journalism. You can help by participating in our "I Support" program, allowing us to keep offering readers access to our incisive coverage of local news, food and culture with no paywalls.
Make a one-time donation today for as little as $1.