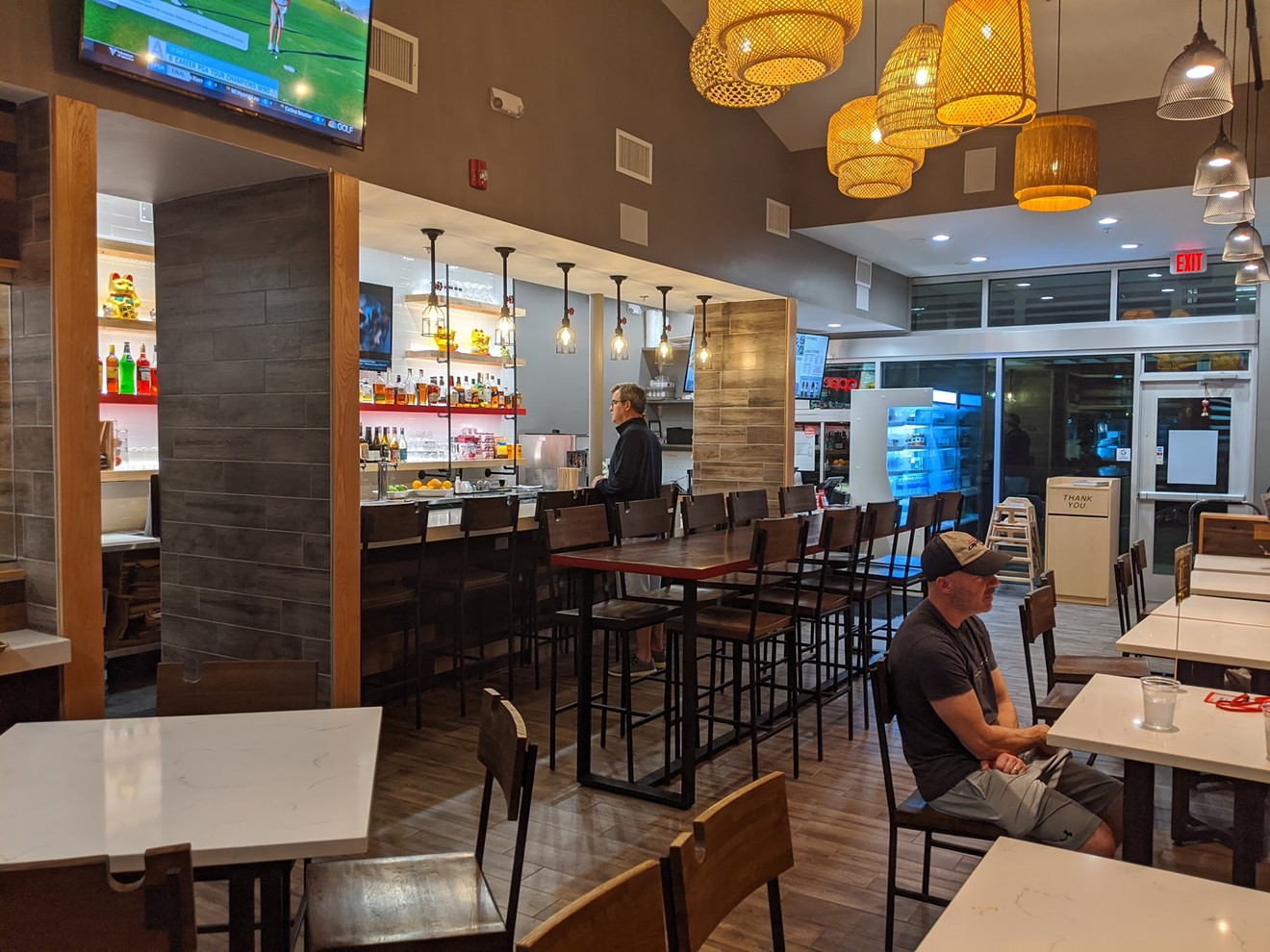 I swung by on a recent night for a casual first look at the two-month-old restaurant. We strolled past the walk-up window on the restaurant’s front — not open at the time, but a cool idea — and ordered at the counter instead.

Red Stix’s agreeably eclectic menu is based around skewers of binchotan-grilled proteins, like Thai chicken satay, fried tofu and Chinese barbecued pork. Order them by themselves, have the cooks slide a skewer into the center of a banh mi or get an order of pad Thai topped with one of the “stix.”

Alongside the portions centered around grilled skewers are a handful of appetizers and sides and a specialty main course that’s already becoming a word-of-mouth hit: the “damn damn” noodles, an ultra-spicy riff on Chinese dan dan noodles.

A banh mi sandwich with show-stealing side order of togarashi waffle fries.
Brian Reinhart
Our chicken satay banh mi was well-assembled ($7.45); I especially enjoyed the clutch of pickled veggies deep in the heart of the sandwich, right alongside a few slices of jalapeño. The filling helps distract from the bread itself, which collapses down to a crusty shell pretty quickly, and which on my visit was cut wonkily, causing some of the chicken to fall out.

Those “damn damn” noodles, though — they aren’t joking around. This is not spicy-for-people-who-can’t-handle-spicy food. This dish brings straight up for-real heat. Ground chicken, scallions, peanuts and a single baby bok choy cut in half are the only distractions from this eater-vs.-food battle with hot pepper and ramen noodles ($8.95).

There’s a sweet glaze hidden in the background of the noodles that makes them survivable, but twisting more noodles around your chopsticks will only bolster the long-term pain.

Every college group has a daredevil. This is what that daredevil should be ordering.

The "damn damn" noodles may not look ferocious, but take a few bites and get back to us.
Brian Reinhart
And speaking of college groups, Red Stix has a secret weapon to prepare it for battle against one of SMU’s favorite restaurants, a certain chicken-slinging fast food spot across the street. Buried deep in Immanivong’s list of side dishes is a killer order of waffle fries ($2.45).

The waffle fries are dusted in togarashi — the Japanese seasoning mix with sesame seeds and chile pepper flakes — and served alongside a cup of sweet-spicy Sriracha ketchup. It’s a no-brainer. Order it.

It’s early, but Red Stix feels like an agreeable addition to the SMU neighborhood. There’s a great casual vibe to the dining room, which has big pictures of food on the walls, a handful of beers on tap and, during my visit, a TV showing Keanu Reeves action movies. The staff are friendly and full of recommendations.

Maybe most importantly for a college-neighborhood restaurant, the menu is affordable and easy for a large group to navigate. This is a place where you can bring a vegetarian friend, an unadventurous kid who just wants grilled meat and waffle fries or a spice fiend who thinks they can tackle the “damn damn” noodles.

To find its natural home, Red Stix had to venture forth from the food hall. SMU’s hungry students are fortunate that it did.

Red Stix Asian Street Food, 6501 Hillcrest Ave., University Park.
KEEP THE DALLAS OBSERVER FREE... Since we started the Dallas Observer, it has been defined as the free, independent voice of Dallas, and we'd like to keep it that way. With local media under siege, it's more important than ever for us to rally support behind funding our local journalism. You can help by participating in our "I Support" program, allowing us to keep offering readers access to our incisive coverage of local news, food and culture with no paywalls.
Make a one-time donation today for as little as $1.