Will Dallas Diners Get Crabs This Year?

Where is my seafood tower? Chris Wolfgang
Where did seven billion crabs go? If you zoom all the way out on Google Earth, you might not be surprised that humans have lost track of (or murdered) hundreds of millions of small crustaceans on the bottom of the ocean floor, but for Dallas diners, our view is hyper-focused. Where's the meat?

For the first time in state history, the Alaska Department of Fish and Game (ADF&G) has canceled the winter snow crab season in the Bering Sea, which typically starts on Oct. 15 and runs for two to four weeks. All the snow crab we see in restaurants and at stores for the entire year is harvested in that window. The red king crab season is also closed for the second year in a row.

Ben Daly with the ADF&G told CNN that the snow crab population has shrunk from eight billion in 2018 to one billion in 2021. The cause of the decline is debated; climate change and migratory patterns lead the pack, but mostly the former.

"I asked my vendors, and I got five different stories from five different people," says Jon Alexis of TJ's Seafood Market in Dallas. "Nobody effing knows. The truth is that we don't know that much about these animals in the ocean."

Alexis adds that crab prices are still elevated, and crab supplies will be "challenging."

Local restaurants and stores seem confident about their supply of crab this year, but next year is uncertain.
Photo by shekina on Unsplash
Brian Wubbena, director of culinary for Truluck's, manages crab inventory for 11 restaurants from Washington, D.C., to La Jolla, California. He doesn't deal with snow crabs as much, but king crab is a big seller for the chain.

"We have it," Wubbena says of his king crab stock, "I started hoarding it to hedge my bets. We have a great partner who put it away for us. We have about 60,000 pounds."

That might seem like a lot, but for 11 restaurants, he expects it to last maybe through January, if they're lucky. He explains the company stores crabs in large frozen-storage facilities and flies or ships them to different locations as needed.

He says the price that dealers are charging per pound still makes king crab a hard sell.

"Pre-COVID it was selling for $79 to $85 a pound. I think our cost on that has doubled, so we raised it to $110 to $115. It feels offensive, feels like we're gouging customers, but there's a limited supply," Wubbena says.

But he says some people will still pay for it because there's just nothing else like it. 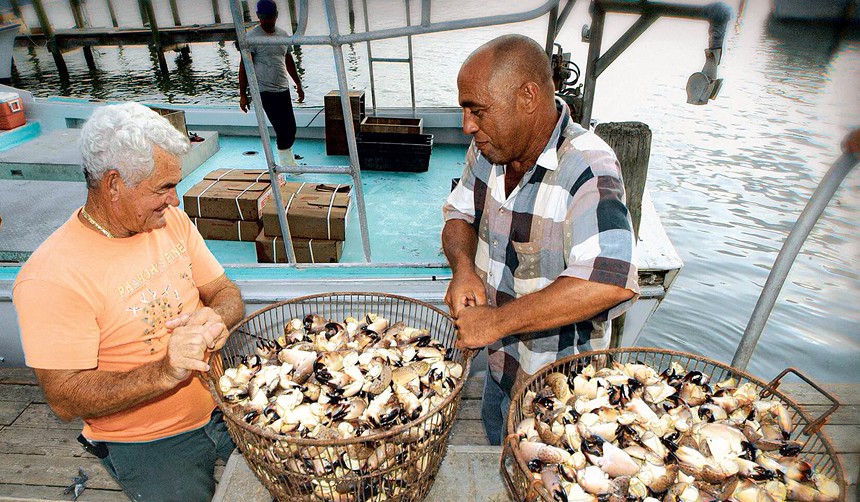 Truluck's will have an ample supply of Florida stone crab claws.
Truluck's
For now, diners can still get fresh Florida stone crab claws at Truluck's. For that variety, only one claw is harvested and the crab is released; the claw regenerates in 18 months. The restaurant serves 200,000 pounds of claws during the season, which runs from October through May.

"The real problem is next October," Wubbena says about the king crab stock. He points out that another big hit on the crab market is that the U.S. is no longer getting crabs from Russia following the country's invasion of Ukraine.

IntraFish reports about Russian crab harvesters that "significant volumes of crab catches are stocked up in the warehouses not able to reach markets," as they attempt to pivot their inventory to Asian markets.

A spokesperson for Central Market, Jackson Mabrie, says that the stores obtain products through direct sourcing and will have an "adequate supply of Alaskan crab throughout the holiday season." As for price, Mabrie says it fluctuates, and the market determines the price at the time of catch.

Deadline reported this week that Deadliest Catch, the docu-series that follows a fleet of fishing boats as they trap crustaceans on the floor of the Bering Sea, will still be filmed this year — the show's 19th season.

"The true people who are harmed in this are the families whose entire livelihoods are the crabbing industry," Alexis says.
KEEP THE DALLAS OBSERVER FREE... Since we started the Dallas Observer, it has been defined as the free, independent voice of Dallas, and we'd like to keep it that way. With local media under siege, it's more important than ever for us to rally support behind funding our local journalism. You can help by participating in our "I Support" program, allowing us to keep offering readers access to our incisive coverage of local news, food and culture with no paywalls.
Make a one-time donation today for as little as $1.