10 Best Concerts of the Week: The Crystal Method, Ishi, Paul Cauthen and More 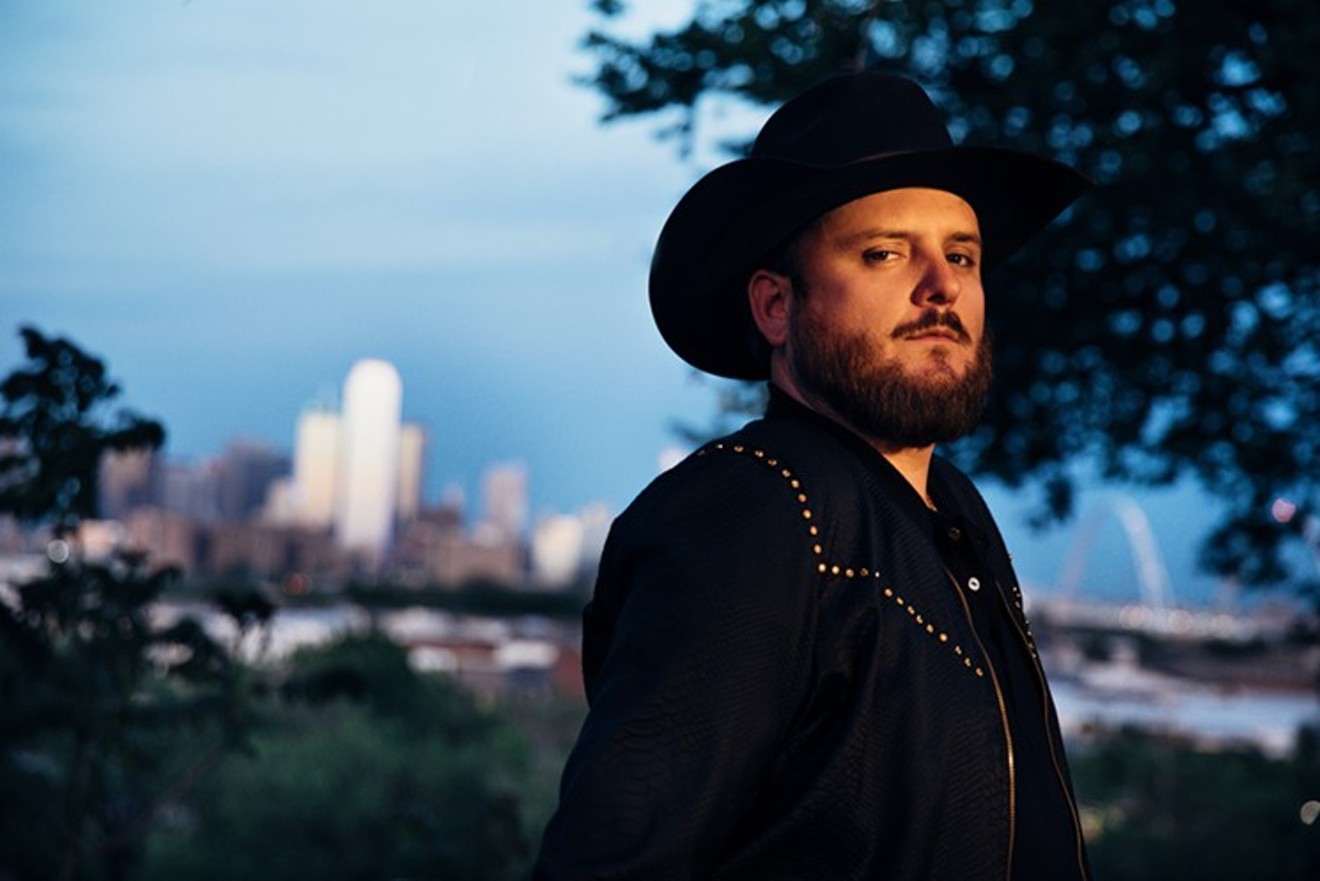 Paul Cauthen plays Sunday night at Tulips in Fort Worth. Anna Webber
We've got an eclectic mix of talent hitting the stages of North Texas this weekend. Thursday kicks us off with a night of rock at Gas Monkey Bar 'n' Grill while things get busy (child) with The Crystal Method over at It'll DO. Rap, punk and electro-funk come to Deep Ellum Friday night in the form of Rakim Al-Jabbaar, From Parts Unknown and Ishi as they take the stages of Trees, Three Links and Ruins, respectively. Brave Little Howl will also be keeping it mellow on Greenville Avenue that night at Sundown at Granada. Saturday, there's an opportunity for electronic music fans to catch a movie and see a show at The Texas Theatre. If that's not your scene, Aaron Watson will be bringing the good times over at Billy Bob's Texas. Cowpunk legends Hickoids will tear things up Sunday evening in Dallas while future country music legend Paul Cauthen gets down to business in Fort Worth. Do you ever wish you were four people in one? We especially do this weekend.
Rock's Not Dead Fest
7:30 p.m., Thursday, May 27, at Gas Monkey Bar 'n' Grill, 10261 Technology Blvd E, $12 at seetickets.us

While it may be a bit much to call a line-up with three acts a festival, Gas Monkey Bar 'n' Grill has a banger of a rock show planned for Thursday night. After the brand new band Josie kicks things off, Meach Pango plays their first show of the year in Dallas in support of their feel-good new single "Wander." Closing out the night is Vasco, a band that has been long active in the Dallas music scene, releasing five singles in the past year with their second full-length album due out later this year.
The Crystal Method
9 p.m., Thursday, May 27, at It'll DO Club, 4322 Elm St., $13 at eventbrite.com

Once a two-piece act that defined the club sound of the late '90s, The Crystal Method split in 2017 when Ken Jordan decided to retire from music. Since 2018, with the release of The Trip Home, founder Scott Kirkland has kept the beats going as a solo act. The Crystal Method's DJ set Thursday Night at It'll DO Club just outside of Deep Ellum will bring the same dark, big beat sound the group was known for when "Busy Child" and "(Cant You) Trip Like I Do" dominated the alt-rock airwaves.
Rakim Al-Jabbaar
7:30 p.m., Friday, May 28, at Trees, 2709 Elm St., Free at axs.com

Duncanville-born rapper Rakim Al-Jabbaar was literally born into hip-hop. The son of Big Al from the Dallas rap crew Nemesis (one of the first hip-hop acts from the area to blow up on the national scene in the late '80s and early '90s) and named after Rakim of the rap duo Eric B. & Rakim, Al-Jabbaar has spent years honing his craft to become one of the most respected wordsmiths in the local hip-hop community. The rapper's show Friday night at Trees will be supported by Nuwamba, Lamar A Dot Thomas, Kaution and more.
From Parts Unknown
8 p.m., Friday, May 28, at Three Links, 2704 Elm St., $15 at seetickets.us

From Parts Unknown is out to make 2021 their best year ever. The band released "Lucifer, You Got Some Splainin' to Do" this past February. The epic track draws inspiration from several of rock's subgenres and showcases the band's solid control of disparate elements that could just as easily unravel. The show Friday night also marks the return of It Hurts To Be Dead to the Deep Ellum stage. Three Links also welcomes Bullet Machine and Nonstarter for a show that is sure to kick the weekend off right.
Ishi
9 p.m., Friday, May 28, at Ruins, 2653 Commerce St., $15 at eventbrite.com

Doesn't it seem like it's been a while since you've heard anything out of Ishi? There's been little noise from what was once one of Dallas' most popular bands until December 2020, when the band started releasing singles again on their YouTube page in anticipation of their forthcoming LP Sweet Gold, which is due out sometime this year. Ishi will celebrate the release of their fifth single "Fly Away" with a show Friday night in The Limbo Room at Ruins in Deep Ellum.
Brave Little Howl
10 p.m., Friday, May 28, at Sundown at Granada, 3520 Greenville Ave., $15 at prekindle.com

Last year, Brave Little Howl quietly released a truly one-of-a-kind listening experience with the double album Live From Big Thicket. The record was released only on vinyl with just one digital track to promote an album that captures the dark, quiet night where the band filled White Rock Lake with their soothing indie-folk melodies and soulful lyrics. Friday night, the group returns to Sundown at Granada for an intimate performance in the space where they once had a weekly residency.
Sisters with Transistors + Dallas Ambient Music Nights (DAMN) Live Show
7 p.m., Saturday, May 29, at The Texas Theatre, 231 W. Jefferson Blvd., $17 at prekindle.com

Texas Theatre has for several years sought to bring together the worlds of indie film and local indie music, showing movies and hosting bands that fit the movie's theme for live concerts behind the screen. This Saturday, fans of electronic music will have the opportunity to see Sisters with Transistors, a film that documents the stories of the genre's founding mothers. Afterward, fans can catch Python Potions and M'Ress behind the screen with stunning visuals provided by Evan Henry and Jim Branstetter.
Aaron Watson
10 p.m., Saturday, May 29, at Billy Bob's Texas, 2520 Rodeo Plaza, $20 at axs.com

It's hard to believe that Texas country musician Aaron Watson has been around for over 20 years now, since the release of his first album in 1999. tI wasn't until the release of his 2015 album The Underdog, however, that this true country underdog found national acclaim. Since then, the singer's popularity has only gone up, and Watson was inducted into the Texas Cowboy Hall of Fame in 2020. Watson's latest album American Soul came out this past February, and he will play this Saturday night at Billy Bob's Texas in Fort Worth.
Hickoids
6 p.m., Sunday, May 30, at Three Links, 2704 Elm St., $20 at seetickets.us

Austin cowpunk legends Hickoids make their triumphant return to Dallas this weekend. Founded in the mid-1980s, the band took their name from co-founder Davy Jones' description of a homeless man wearing a beaten-up cowboy hat whom he found dumpster-diving outside of Jones' apartment. The band has gone through its ups and downs over the last several decades, most recently losing Jones to cancer in 2015. Never to be stopped, Hickoids will bring labelmates Loco Gringos and Joecephus & The George Jonestown Massacre with them this Sunday evening to Three Links.
Paul Cauthen
7 p.m., Sunday, May 30, at Tulips, 112 St. Louis Ave., $35 at prekindle.com

Paul Cauthen has one of the best voices in country music, and we don't just mean locally. Known for the same gritty baritone of his closest musical ancestor Waylon Jennings (whose "Luckenbach, Texas (Back to the Basics of Love)" Cauthen covered in 2017), the singer has garnered a growing national reputation for doing old school country ("Prayed for Rain") and being able to do it in a new school way ("Cocaine Country Dancing"). Cauthen plays Sunday night at Tulips in Fort Worth.
KEEP THE DALLAS OBSERVER FREE... Since we started the Dallas Observer, it has been defined as the free, independent voice of Dallas, and we'd like to keep it that way. With local media under siege, it's more important than ever for us to rally support behind funding our local journalism. You can help by participating in our "I Support" program, allowing us to keep offering readers access to our incisive coverage of local news, food and culture with no paywalls.
Make a one-time donation today for as little as $1.