Learn All About the Earthy-Tasting Spirit Sotol, Now Served in Dallas Bars Desert Door has been making sotol for a year and a half in Driftwood, Texas, aiming to bring the little-known spirit to the forefront for drinkers with a smooth, earthy new taste. A member of the tequila family, sotol is made from a desert plant native to the arid climates of West Texas, Mexico and parts of New Mexico.

Sotol can vary in taste depending on where it’s grown. Desert-grown sotols tend to have mineral, leather and earthy notes, while forest-grown ones tend to be pinier. If mezcal is the smoky cousin of tequila, then sotol is its earthy twin.

Desert Door’s sotol is made with Texas-grown sotol and has tasting notes of vanilla, cedar and cinnamon, with touches of dusty cherry, allspice and pine nuts. It’s balanced with a finish of oak and eucalyptus.

Desert Door just released an oak-aged, 100-proof version of its sotol. The new variation was aged in charred oak barrels for just under one year, and the first batch is hitting Dallas bars and restaurants.

“In addition to the herbaceous qualities of sotol, you will taste a touch of vanilla and oak from the char,” says Judson Kauffman, one of Desert Door's three founders.

“We work with ranchers to wild-harvest the crop to make our sotol." — Judson Kauffman


You can order sotol to sip or in a craft cocktail, from a Paloma to an oak-aged Old-Fashioned. Kauffman says the sotol jalapeño margarita or a bee’s knees are always a safe bet.

Sotol is also known as dessert spoon or Spanish sotol. It looks similar to all those low-maintenance plants that are a favorite of apartment landscapers, but the use of sotol dates back 13,000 years when Native Americans roamed the deserts before Christopher Columbus ever set sail.

Back then, sotol was used for woven baskets and weaponry, Kauffman says. Cave paintings in Seminole Canyon State Park show natives enjoying the boozy, psychedelic effects of sotol, fermented before distilling reached the continent. It’s said to be the oldest alcoholic drink in North America.

West Texas ranchers despise the plant, because it soaks up water from the nutrient-filled grasses and plants grazed by livestock.

“There are estimated to be 20 billion plants in Texas alone,” Kauffman says. “We work with ranchers to wild-harvest the crop to make our sotol. We can make four to six bottles from one plant.”

The outfit has incorporated environmental sustainability into its business model and repurposes about 90% of its waste. 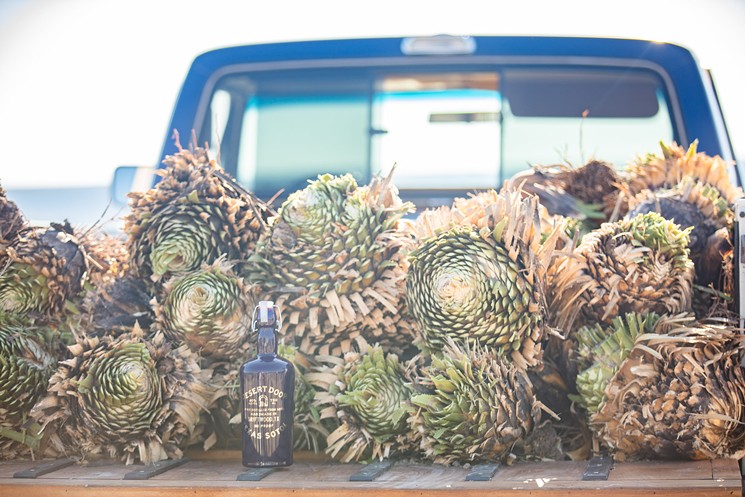 The abundant sotol plant is native to West Texas, though it's seldom used. Desert Door Texas Sotol is the first sotol distillery in North America.
courtesy Desert Door Texas Sotol
“We are almost a zero-waste facility,” Kauffman says. “Ranchers use the spent sotol to supplement livestock feed since it’s high in fiber, and we have many artisans in the area that are creating all sorts of great products.”

One artisan uses the spent sotol to make soap, he says. A baker uses it to make a sotol bread, while another makes caramel from the byproduct.

“This is a lost natural resource that grows abundantly all over the state. We want to see other companies come in and see what they can do with sotol,” Kauffman says. “You can make a lot of things with it, it’s very versatile. It's a natural resource in the state of Texas."

Desert Door is in a category of its own as the only sotol distiller in North America currently distributed across Texas, from the Panhandle to Padre and El Paso to Houston.

Sotol is great as an Old-Fashioned and also a Paloma.
courtesy Desert Door Texas Sotol
The company began when Judson Kauffman, Ryan Campbell and Brent Looby, all U.S. military veterans, took a business class at the University of Texas at Austin. The trio worked on a business proposal and landed on a distillery. Kauffman is a former eight-year Navy SEAL. Campbell was an intelligence officer in the Army for five years, and Looby served in the U.S. Marine Corps for 20 years as a jet pilot.

“We fell in love with the history and the liquor itself,” Kauffman says. “We want to bring sotol back and put it on the map where it belongs. Clearly, it belongs in Dallas.”

Fair point. Many of Dallas’ best bars began stocking it. You can find Desert Door sotol at places like Alamo Club and Parliament, Bolsa and Town Hearth. It’s at the Rattlesnake Bar at the Ritz, and Bourbon and Banter at the Statler.

“The restaurants and bars we gravitate to tend to value ingredients and products that are local and regional, and made by people who care about their craft,” Kauffman says. “Fortunately, that’s a lot more restaurants than it used to be.”
KEEP THE DALLAS OBSERVER FREE... Since we started the Dallas Observer, it has been defined as the free, independent voice of Dallas, and we'd like to keep it that way. With local media under siege, it's more important than ever for us to rally support behind funding our local journalism. You can help by participating in our "I Support" program, allowing us to keep offering readers access to our incisive coverage of local news, food and culture with no paywalls.
Make a one-time donation today for as little as $1.