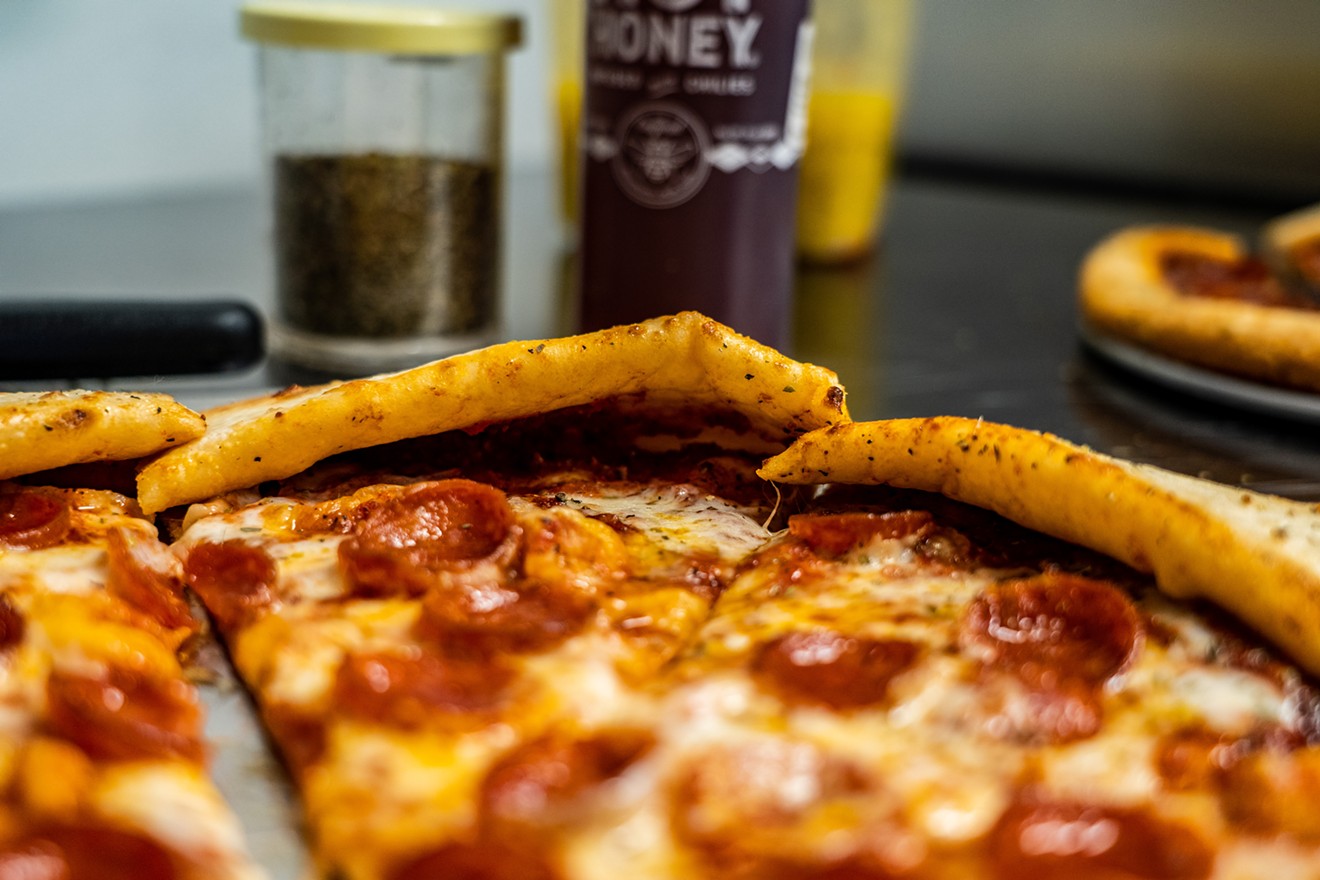 Upskirt used to be a pizza term. Not sure what to call this. Sean Welch
Thin crust, stuffed crust, garlic crust or cheesy crust. At Sauce'd it's just crust.

Many pizza joints have signature crusts, but only one can lay claim to the original Texas-style crust. Sauce'd Pizza and BYOB is a locally owned pizza place that is quickly making a name with its own unique crust and pizza. 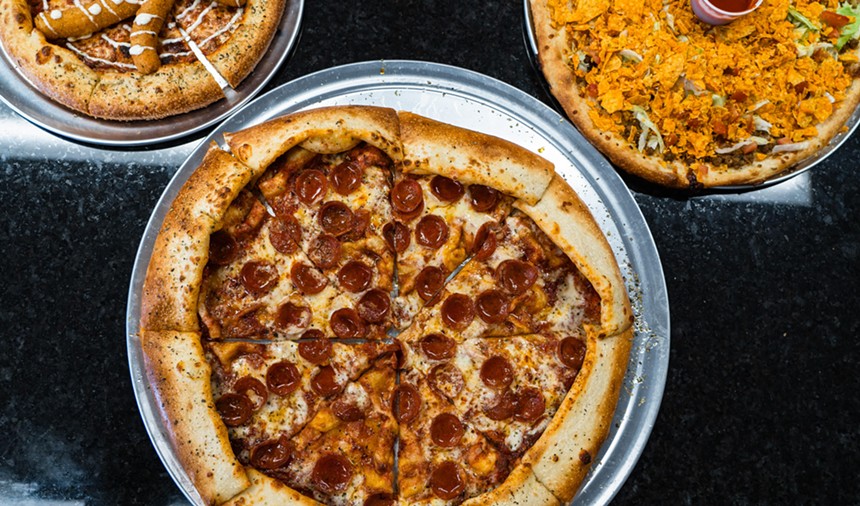 The Texican (top right), pepperoni (middle) and the Six Finger Cheese (top left).
Sean Welch
Chef and owner Conner Gildenblatt was born and raised right here in North Texas and says pizza has always been something his family has bonded over. From car rides with a warm box on his lap to candlelit pizzas in lieu of a birthday cake, Gildenblatt has always loved pizza.

In January 2019, his relationship with pizza transitioned from consumer to creator when he took a class on how to cook pies through YouTube University. Soon enough he found himself hosting pizza nights with friends, testing his skills. They opened their spot in Grapevine two years ago, just 10 months after learning the craft. And just a couple of weeks ago they opened a Dallas restaurant at Frankford and Midway Road.

After seeing slices of Sauce'd pizza making rounds on social media, we carved out some time to visit his family-run pizza joint in Grapevine. Before studying the menu, we couldn't help but notice the blackboard above the bartop riddled with jokes, quotes and the specialty menu items such as taco pizzas, mozzarella stick pizzas and their self-ascribed original Texas-style crust.

Immediately questions began running through our heads: What is a Texas-style crust and why have we not heard about it before?

Gildenblatt's intent was always New York-style pizza; he even traveled to the Big Apple when he was 21 with his dad to try it for himself. But his dad says he'd been working on this special style for 40 years. So one day while he was tossing dough his dad stepped in the kitchen and told him to just trust him.
click to enlarge 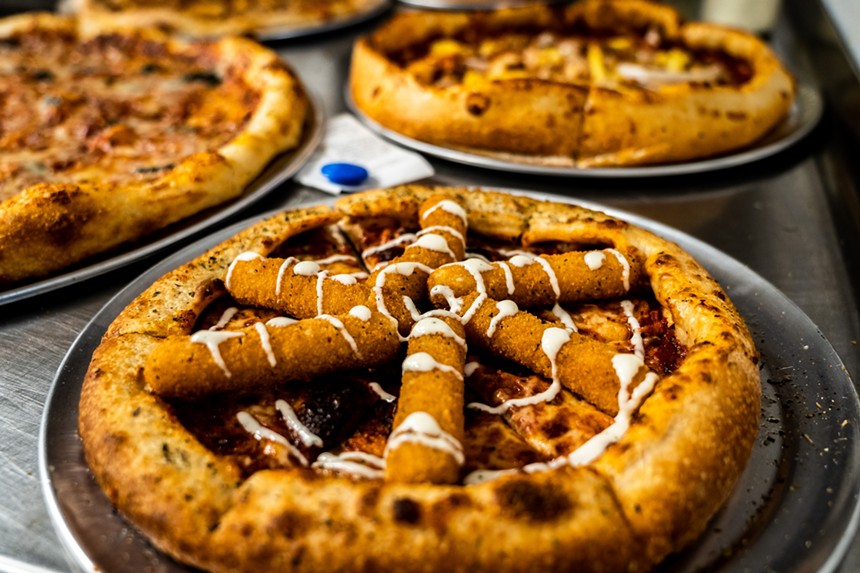 Yes, that's fried cheese sticks.
Sean Welch
After tossing and stretching the dough they placed it down and began to stretch the edges further. Then they spread the marinara in the middle and folded the edge of the dough back over itself. As Gildenblatt describes it, “it’s like putting a crispy garlic breadstick at the top of a slice of pizza”.

Customers can build their own pies at Sauce'd, or order one of the house specialties, like The Texican, which is made with seasoned beef, mozzarella, lettuce, tomato and Doritos ($13). A Honey Pep has Cup ‘n Crisp pepperoni and Mike’s Hot Honey along with mozzarella. There are also two Hawaiian-style pizzas and a white pizza with house-made alfredo sauce, ricotta, spinach and tomato.

Other menu highlights include beer-battered pickle spears served with honey mustard or Ranch. There's Philly cheesesteak and a big bowl of "s’ghetti."

As the name implies, Sauce'd is BYOB. They run a lunch special Monday through Friday: 2 New York slices with one topping each and a drink for $6.99.

Sauce'd Pizza and BYOB, 18110 Midway Road, Suite 101 (Dallas) or 110 North Main St. (Grapevine). Open 11 a.m. to 9 p.m. Monday - Thursday; 11 a.m. to 10 p.m. Friday and Saturday; 12 p.m. to 8 p.m. Sunday.
KEEP THE DALLAS OBSERVER FREE... Since we started the Dallas Observer, it has been defined as the free, independent voice of Dallas, and we'd like to keep it that way. With local media under siege, it's more important than ever for us to rally support behind funding our local journalism. You can help by participating in our "I Support" program, allowing us to keep offering readers access to our incisive coverage of local news, food and culture with no paywalls.
Make a one-time donation today for as little as $1.