Is This the Cheapest Topo Chico In North Texas? 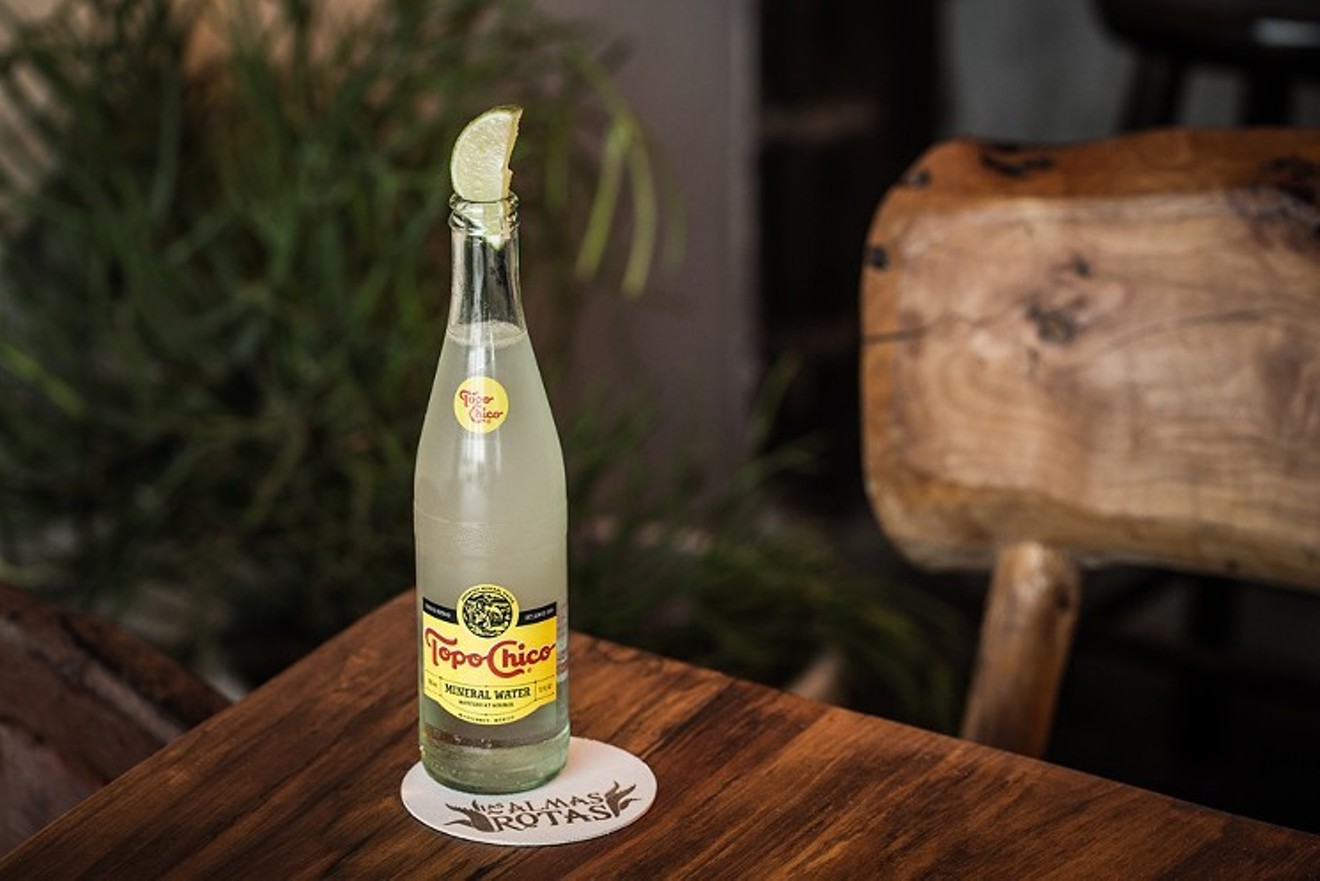 Las Almas Rotas serves the classic Texas Ranch Water, a cocktail made with Topo Chico, lime, and tequila or mezcal. Melissa Hennings
Summer in Texas can get expensive. Between the $300 electric bills and the cost of posting up at the FOE pool every weekend, heat-related expenses start to add up. One of our biggest summer expenditures: Topo Chico.

Sure, every Texan sips this popular Mexican sparkling mineral water year-round. But when the Texas heat settles in — all hot and heavy and relentless like a sweaty quilt you can't get out from under — there's nothing quite as refreshing as an ice-cold Topo Chico with a squeeze of lime. But when you're throwing back four or five a day (starting in the morning, of course, by dropping a shot of cold-brew concentrate into a glass of fizzy Topo), that adds up quick. 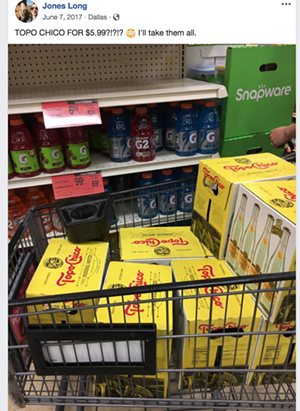 A purely Texas phenomenon? The Topo Chico price check is an increasingly common practice on social media during hot-weather months.
Screenshot via Facebook
This may explain the social media phenomenon of Topo price-checks. Much like when gas prices soar and consumers start sharing tips on deals, we've spotted more than a few posts alerting savvy shoppers to Topo deals.

"Attention Topo Chico shoppers: Whole Foods is selling 24-bottle Topo Chico pallet $5 cheaper than Costco," one friend posted on Facebook in May. Local bartender Jones Long posted a photo from Tom Thumb as she cleaned out its entire stock of $5.99 Topo 12-packs, much to the dismay of thirsty Facebook friends begging to know her source.

So what is the market price for Topo Chico? At stores like Target and Whole Foods, you'll find 12-packs selling at $9.99, approximately 83 cents per bottle. Walmart's website lists 12-packs at $7.42 — out of stock, of course. Sales aside, you'll sometimes find it for $7-$8, but even after Coca-Cola purchased Topo Chico recently, our Topo budget stayed relatively the same.

Until we found WinCo Foods.

There are many reasons to love this employee-owned grocery store, which has locations in Duncanville, Garland and Arlington and a new 24-hour store in Carrollton. A sort of Costco-classic grocery store hybrid, WinCo keeps prices low by selling most staples in bulk, making it easy to get exactly what you need — and for impressively cheap. Bulk pasta, coffee, cereal, spices and snacks aside, one reason keeps us going back: the price of Topo Chico. Heaven looks a lot like WinCo.
Beth Rankin
The highest price we've paid for a 12-pack at WinCo is $6.88. And when it's on sale, like right now at the Carrollton store, you can snag a dozen bottles for $6.63, bringing the price to 55 cents per bottle.

Sure, Topo isn't exactly the biggest line item on our budget, but during an unforgiving summer like this one, saving 30 cents a bottle feels pretty nice.

Now that we've broken out of the $10-per-12-pack habit, we're curious: Is there anywhere in DFW selling Topo 12-packs for cheaper than $6.63? We shared our secret Topo source — now we wanna hear yours.
KEEP THE DALLAS OBSERVER FREE... Since we started the Dallas Observer, it has been defined as the free, independent voice of Dallas, and we'd like to keep it that way. With local media under siege, it's more important than ever for us to rally support behind funding our local journalism. You can help by participating in our "I Support" program, allowing us to keep offering readers access to our incisive coverage of local news, food and culture with no paywalls.
Make a one-time donation today for as little as $1.