Breakfast Brothers use a proprietary spice on their wings. Alex Gonzalez
An Arlington favorite is moving closer to Dallas. Known for serving Southern-inspired breakfast all day, Breakfast Brothers will open its second location at The Shops at Red Bird next month.

Former nightclub owners Rickey Booker and Jonathan Biley-Smith opened the first Breakfast Brothers location last January, and while their flagship has only been open for a little more than a year, it’s already become a favorite among Arlington residents, as well as artists and athletes coming into town. Breakfast Brothers’ clientele includes Arlington Mayor Jim Ross, Dallas Cowboys cornerback Trevon Diggs and the Ying Yang Twins. 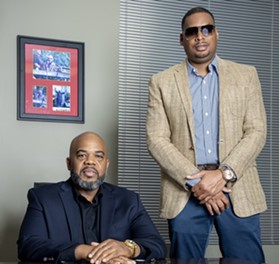 Booker and Briley-Smith first launched Breakfast Brothers out of a black trailer outside of their clubs, including former Bishop Arts hotspot The Pink Lounge.

“That trailer was a big staple to each one of the nightclubs we had, because we didn't have a kitchen,” Booker says. “Some people would line up at that trailer ‘til 2 or 3 in the morning.”

When COVID struck, the two began looking into other opportunities. They launched a food truck at the beginning of the pandemic, which immediately became popular. It was then Booker knew Breakfast Brothers would be successful as a brick-and-mortar.

“All those places, I noticed they closed around 2 [in the afternoon,]” Booker says. “Me, I like breakfast in the evenings, more or less than in the daytime. Also, you might have a couple of early meetings, when you can’t get breakfast until noon or 1 o'clock. By the time you get ready to go to some of these places, they’re already closed.”

So, Breakfast Brothers serves a full menu all day. Some items include their spiced up spin on classics, including their chicken and waffles, made with fluffy Belgian waffle, strawberries topped with caramel and powdered sugar and served with fried chicken wings or boneless chicken breast ($13). Go for the fried chicken wings. Flavored with Breakfast Brothers secret signature season, these wings set their chicken and waffles apart. 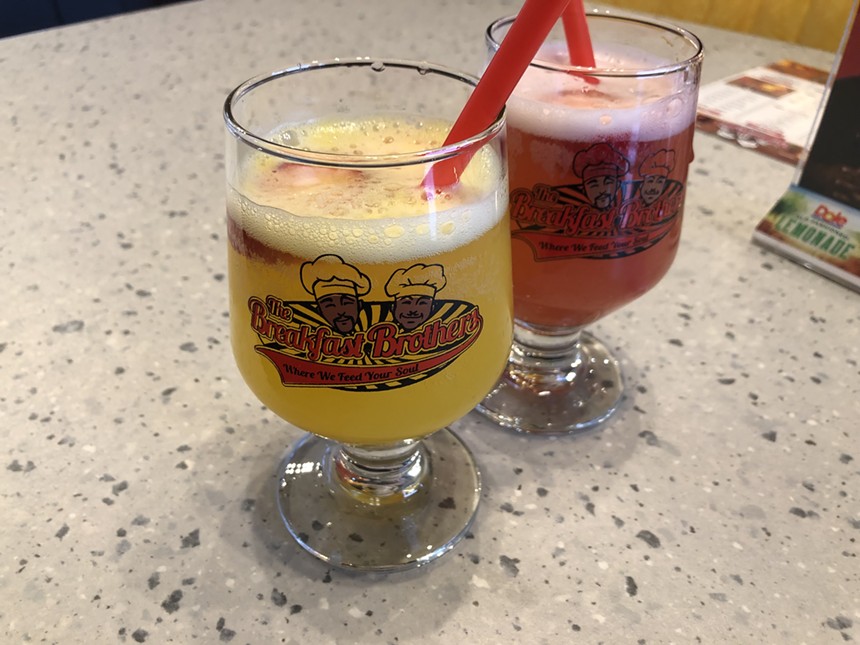 There are several different flavors of mimosas, including orange, cranberry and mango.
Alex Gonzalez
The salmon and grits, also flavored with the signature seasoning, is grilled to a savory perfection ($20) and it comes with a small serving of creamy, buttery grits.

Signature items include the grilled peanut butter and jelly sandwich ($7) and the red velvet waffle, a plate similar to the chicken and waffles but with a red velvet waffle ($13). Mimosas come in a variety of flavors, among them orange, cranberry, mango, pineapple and strawberry ($4 each).

“Sometimes people don't want breakfast food in the morning,” Booker says. “They want a cheeseburger or they want a dinner item in the morning, but they’ve gotta wait ‘till 11 o'clock for some steakhouse to open up. So I said, ‘I'm gonna just offer a breakfast, lunch and dinner all day.’” 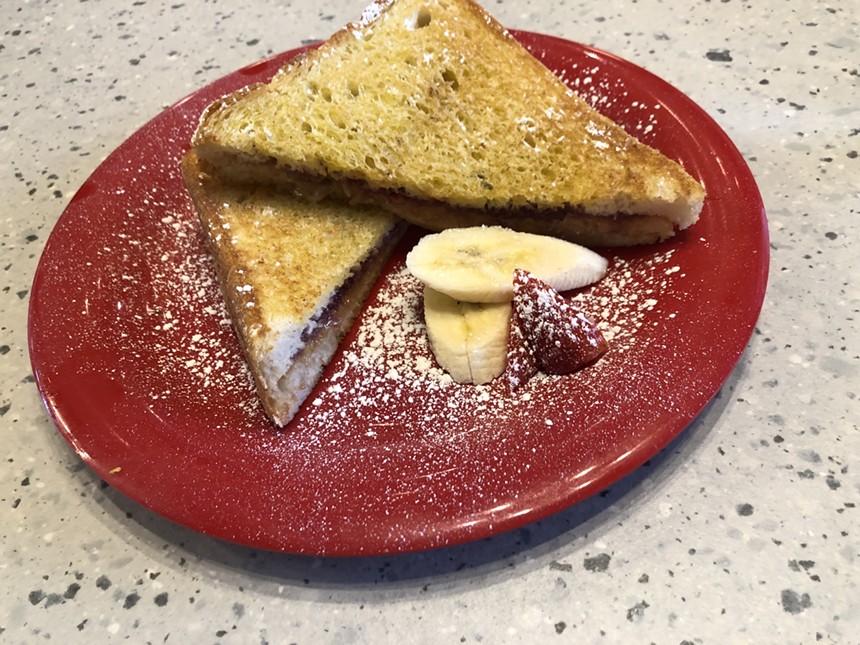 A grilled peanut butter and jelly sandwich is a highly underappreciated meal — for any time of the day.
Alex Gonzalez
The restaurant is designed to replicate a vintage car, with leather seats throughout. Hip-hop and R&B play throughout the space, allowing the restaurant to maintain an upbeat vibe.

Booker says this new location at The Shops at Red Bird is set to open in May and will have the same aesthetic, but will be double the size. The Shops at Red Bird, which celebrated its groundbreaking for redevelopment in 2019, has served as a predominately Black shopping center and neighborhood in Dallas for decades.

“Black businesses need to be in a lot more areas, in addition to predominantly Black areas,” Booker says. “... You may have a Southern breakfast at Cracker Barrel, but you can come to Breakfast Brothers and have an authentic, cultured Southern breakfast. We’ve got higher flavor and seasoned ingredients, which have a little bit more of an aftertaste. I just want people to come experience that difference in Southern taste.”

Opening a new spot amid industrywide staffing struggles after two years of a pandemic may seem daunting, but Booker says the key to combating the restaurant worker shortage and maintaining good overall morale is simple: pay employees a living wage.

“If you can afford it as a restaurant owner and as a business owner, in the days we're in now, just pay them,” Booker says. “They're structuring the experience and helping you to keep develop this vision. When I start paying individuals what they asked for, I started keeping employees and I started gaining more employees. It makes sense.”

Breakfast Brothers 130 E. Bardin Road, Arlington and 3704 W. Camp Wisdom Road #120 (Opening in May). Open 7 a.m. to 7 p.m. daily.
KEEP THE DALLAS OBSERVER FREE... Since we started the Dallas Observer, it has been defined as the free, independent voice of Dallas, and we'd like to keep it that way. With local media under siege, it's more important than ever for us to rally support behind funding our local journalism. You can help by participating in our "I Support" program, allowing us to keep offering readers access to our incisive coverage of local news, food and culture with no paywalls.
Make a one-time donation today for as little as $1.