Fancy yourself a comedian, eh? Well, put together a two-minute routine and try to woo the audience at the West End Comedy Theater's open mike every Wednesday at 8 p.m. The forum is open to singer/songwriters and performance artists as well, but we find the real test of humiliating the self comes with an amateur round of comedy. Not to worry--we doubt there's any produce thrown, but give it a shot and judge from your mates' reactions as you bound offstage to see if you were right when you said, "Dude, I could totally work this crowd." If right, you were a shining star. If you were wrong, at least you can add one of the most terrifying and exhilarating experiences to your entertainment résumé.

Best Role Model Who Doesn't Have Millions to Donate

Oh, you could hand over a collection of old sculptures to the city. The newspapers would lavish praise on you, and the 500 or so people in Texas who actually appreciate bits of cast-off construction material welded into odd shapes would consider you some sort of god. Working for broader goals--the eradication of AIDS, an end to poverty, that sort of thing--rarely nets personal glory. Rich folks typically fight these problems from a safe distance, with a checkbook. No matter how much they donate, however, few can match the efforts of radio personality Action Jaxon. He organized the city's largest AIDS testing drive, participated in 7 UP's Serving Up a Cure dinner three years in a row, hosted the AIDS Arms Life Walk four years in a row, serves as a board member for the AIDS Services of Dallas, rode in eight fund-raising bike rides and so on. In addition, he volunteers at various homeless shelters and spends one week a year living in a shelter as a way to raise awareness. Then there's his work with the Carter BloodCare Blood Drive, Boxing for Life, reading programs...the more people George W. forces into poverty, the harder this guy battles back.

It depends on who tells the story. Either Dallas Cowboys receiver Drew Pearson rudely shoved Nate Wright to the ground as Roger Staubach's desperation heave descended on that fateful day, one game before the Super Bowl, in 1975, or the hapless Viking simply fell victim to incidental contact. When Minnesota fans approach Pearson for an autograph, however, he lets them know precisely where he stands on the issue, signing the ball, paper or family heirloom thusly: "I did not push Nate Wright, he pushed me. Get over it. Hail Mary, 12/28/75."

We've started bragging that we used to be in the local band [DARYL]. With all the lineup changes in the last 15 months, no one would be the wiser, perhaps not even the actual members of [DARYL]. It was hard to keep track--we tried, but it was at a bar, on a napkin. You know how these things go. The starting lineup was Dylan Silvers on guitar and vocals, Jeff Parker on bass and vocals, Michael Lamm on drums and Dave Wilson on guitar, keyboards and backup vocals. Parker left; Silvers switched to bass. Justin Wood was added on guitar, along with Angie Comley on keyboards and vocals. Wilson left. Dave Christensen took over on bass, and Silvers went back to guitar. Christensen moved to guitar when Wood left, and Comley's replacements were dual keyboardists/vocalists Justen Andrews and Beau Wagener. At some point, former keyboardist Chad Ferman filled in, a saxophonist named David Hayes was added, and, we think, Santana did a riff or two (that guy plays with everyone). What we do know is that [DARYL] has kept the same lineup for a dozen shows now and sounds better than it has in more than a year. Gentlemen, keep your seats.

The D-FW theater scene needs a lesson on supply and demand. There is too much of what we don't want. Seriously, could anyone else stage Annie or Joseph and the Amazing Technicolor Dreamcoat this year? Was there a clearance sale at the costume warehouse? And then there's the matter of too little of what we do want, mainly Our Endeavors Theater Collective, whose schedule includes only Around the World With Blackbrows the Pirate, an original play to tour elementary schools this semester, and another play that has yet to be determined. Both will surely be worth trespassing at DISD or driving to Tyler for, though we won't object to a legal visitation at a theater near downtown. The 7-year-old, dozen-member ensemble founded by couple Scott Osborne and Patti Kirkpatrick is innovative, mesmerizing, compelling, fantastical and about a million other gushy adjectives we could string together, whether they're performing a rare and heady work by Stanislaw Ignacy Witkiewicz or pulling out the fishnets and garters for Extreme Acts, a burlesque, sideshow, comedy, musical, dance revue. 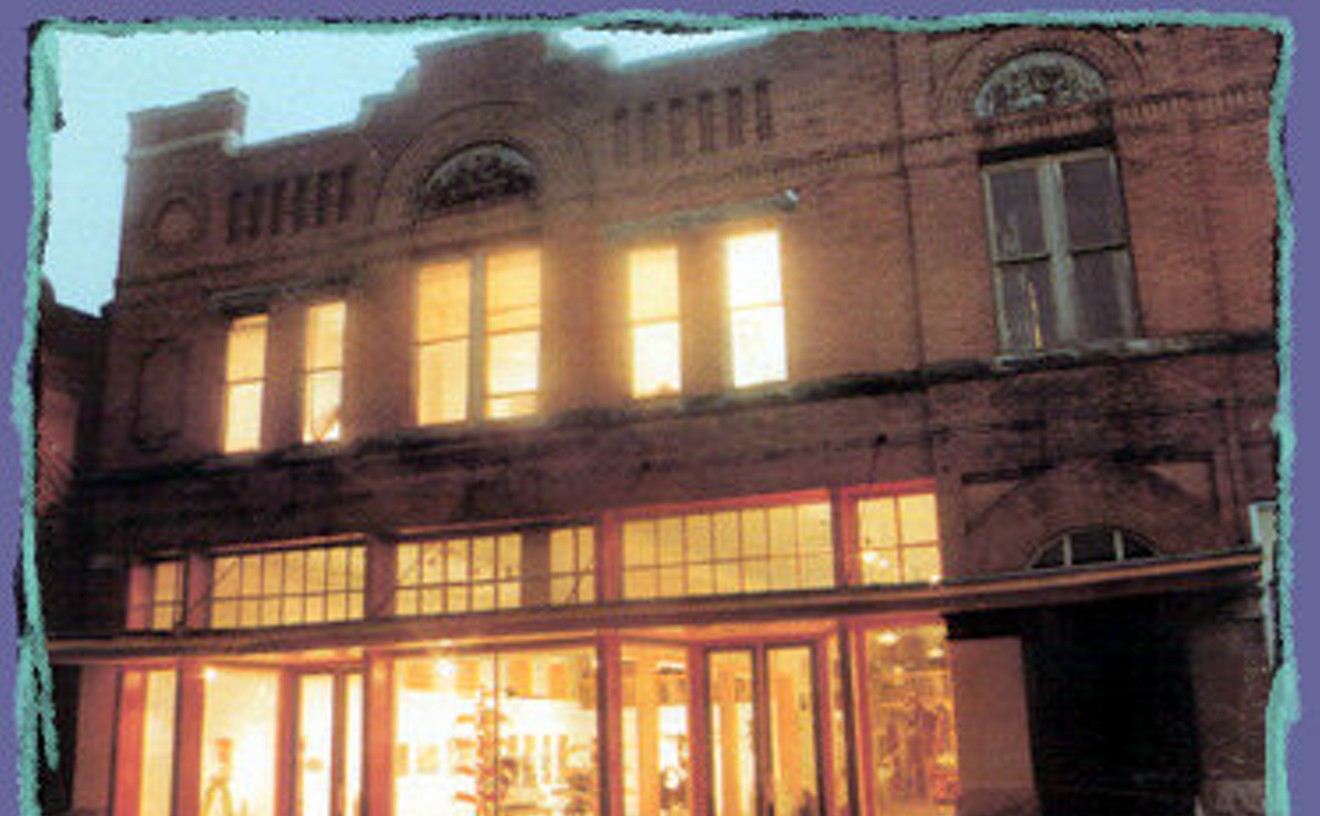 We can't expect you to drive 30-something miles south to Waxahachie to look at art when you won't even drive five blocks to go to a Dallas gallery. But, for a few hours on a weekend afternoon and a quarter-tank of gas, Waxahachie's Webb Gallery is an inexpensive road trip. And the art's so fun, we swear it won't even feel like you're getting cultured. Bruce and Julie Webb founded their gallery about 17 years ago out of their love for self-taught art, primitive arts and crafts and fraternal lodge pieces. And the stories behind the works are just as intriguing as the drawings, paintings and sculptures in the collection. These are artists whose lives revolved around minimum-wage jobs and families and were affected by mental and physical disabilities. They didn't dream of making it in New York or getting their first solo exhibits. They made art because they were driven to create and it made them happy. It'll make you happy, too, if you can find the time.

The world's divided into camps: Kerry vs. Bush, Roth vs. Hagar, Magnolia vs. Angelika. While the Angelika in Mockingbird Station has its up sides--more theaters, a restaurant in the lobby--the Magnolia still gets the nod as Dallas' best theater, and not just because you can smoke in the bar, though that doesn't hurt. The place is just a little cozier and more audience-friendly than the art-house megaplex up Central Expressway: You can buy DVDs in the lobby, get yourself a box of Aussie cookies Tim Tams before the movie and then go eat at Ferré or Paris Vendome or Taco Diner afterward, all eateries that far outshine the one in the Angelika's downstairs. And the Magnolia is run by film geeks, from boss man Tearlach Hutcheson (a film prof when he's not doing the books for Landmark these days) to managers to ticket-takers, all of whom are happy to argue the history of cinema with you before a screening of Fahrenheit 9/11 or Garden State or some other top-of-the-line indie showing at the theater. Parking sucks, though.

From The Range's Web site: "The Country Music Industry had alienated so many fans by the 'Great Garth Cloning Experiment of the '90s' that The Range seemed like a breath of fresh air. KHYI brought many listeners back to Country Radio." Couldn't have said it better--actually, we could have, but we can't argue with the point that country radio in this town sucks. In fact, all radio in this town sucks--save, oh, that station broadcasting jazz and static from the University of North Texas--and not just because most of it sounds like 1975. (Seriously, imagine listening to radio in the 1970s and finding only stuff from the 1940s; that's the state of our dial today, with its penchant for everything oldie and moldy.) The 7-year-old Range, with its homegrown jocks (including 41-year vet Allen Peck Sr.) broadcasting 50,000 watts from our own back yard, sounds like KNON without the amateurishness and Saturday-night KERA without the pledge-begging. The playlist is superb--from Townes Van Zandt to Willie Nelson, Johnny Cash to Loretta Lynn, Steve Earle to Dwight Yoakam--and we'll even forgive the occasional Pat Green, because at least he wasn't born and bred in a Clear Channel basement lab. There's even gospel on Sunday morning. Jesus, that's awesome.

There is an oasis from the musty-smelling air grates and urine-soaked corners of downtown. A place where the grass is always greener, the sunlight is diffused, the honking traffic is muffled and water runs clean and cigarette butt-free. Even ink pens are prohibited; sketch artists beware. Thanks to Raymond D. Nasher, this rectangle of downtown Dallas is neither downtownish nor Dallas-like with its 1.5-acre garden, an "outdoor museum" of contemporary sculpture complemented by foliage, walls, stairs, stones and fountains. The indoor gallery space is an extension of the garden with clear glass walls and cast aluminum sunscreens, allowing outdoor views and natural light to pour in. Even those who don't know Henry Moore from Sherwin-Williams or who think Alexander Calder is one of the guys from Queer Eye for the Straight Guy can take a relaxing stroll through the concrete and metal, meditating on the skyline and forgetting about the 9-to-5 world outside.

Best Use of Humidity 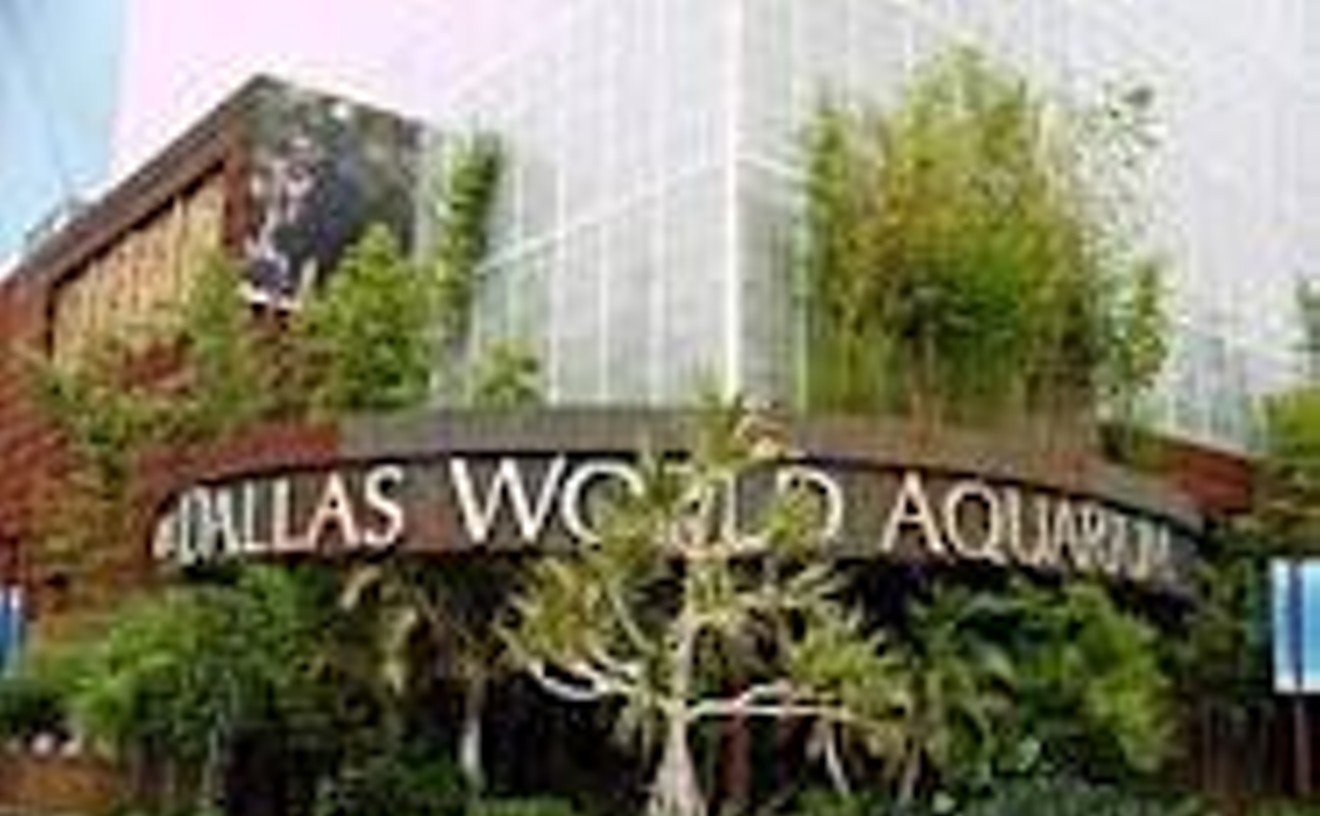 Humidity curls our hair and dots our brow with sweat. And there are only a few reasons worth enduring it: tiny howler monkeys with tiny hands and tiny ears; sleek, whiskered river otters; three-toed sloths and stoney, ancient-looking manatees. These and hundreds of other creatures inhabit the Orinoco--Secrets of the River rain forest exhibit at the Dallas World Aquarium, which re-creates a section of Venezuela's Orinoco River basin. There's more to this aquarium than fish, which, in our opinion, are nothing in comparison with the seven-level rain forest. Sorry, white-spotted bamboo shark and stingray. There are also penguins, but they're South African penguins, so look for them outside...where it's almost as humid and muggy.