The Most Exciting New Restaurants Opening This Fall in Dallas


Now that summer is largely behind us, things are picking up. There are more food festivals, more events and a batch of new restaurants preparing to open this fall. These are the forthcoming restaurants we've got our eyes on:

The Statler
The Statler Hotel downtown is in the midst of a massive renovation, and according to a press release, it will house five new food and drink venues, all run by Graham Dodds, who was recently tapped as the culinary director for the hotel and its many new concepts:

Matt McCallister (left) is joining the Malibu Poke team, led by TJ's Seafood owner Jon Alexis.
Courtesy of Kevin Marple/Malibu Poke
Malibu Poke
The DFW market is swimming in poke (sorry), the marinated raw seafood dish that's proliferated across North Texas at an unsustainable rate. There is one forthcoming poke spot that's caught our eye, though: Malibu Poke, a fast-casual spot that focuses on sustainable catch and high-tech ordering. Malibu Poke recently made the news with a surprising addition: FT33's Matt McCallister has signed on as the culinary director, which means these poke bowls could turn out to be substantially more interesting that Dallas' other poke offerings.

Internet Cafe 2 is the ironic, tongue-in-cheek coffee shop Oak Cliff didn't even know it needed.
Beth Rankin
Internet Cafe 2
Opening in October on a sleepy street in North Oak Cliff, Internet Cafe 2 is "part art piece, part performance art and part coffee shop," explains owner Megan Wilkes, who is also co-owner of Emporium Pies. Expect a side of irony with your espresso drinks, along with a few pastries and "so much internets."

Sachet opens Sept. 20 in the Shops of Highland Park.
Courtesy of Brad Murano/Sachet
Sachet
A striking new restaurant from the team behind Gemma, Sachet is bringing a stunning, light-filled, coastal Mediterranean restaurant to the Shops of Highland Park on Oak Lawn. Opening Sept. 20, Sachet promises "a fresh, light menu that’s inspired by the flavors of the Mediterranean coast, drawing from a broad array of countries such as Spain, France, Italy, Greece, Lebanon, Israel, Turkey, Tunisia, and Morocco," according to a press release.

Chef Bruno Davaillon's over-the-top French restaurant has spent an obscene amount of money on the buildout and high-dollar custom everything, right down to the napkins.
Courtesy of Bullion's Facebook page
Bullion
Chef Bruno Davaillon's lavish French restaurant, opening downtown this fall, has teamed up with Dallas Urban Farms. A custom hydroponic setup in Bullion's catering kitchen will allow Davaillon to grow "specialty heirloom vegetables, such as herbs and greens." While this has been the most-hyped restaurant opening of the year to date, we're wary. Owner Davaillon told the The Dallas Morning News: “I want a place where people can come two or three times a week.” In the same interview, he said meals will cost about $80 per person. With prices at Dallas restaurants continuing to trend upward, we're frequently concerned that those who can't afford $80 per person per meal will be left behind. Still, Bullion's hydroponic farm is forward-thinking, and we're curious to see how the restaurant comes together. 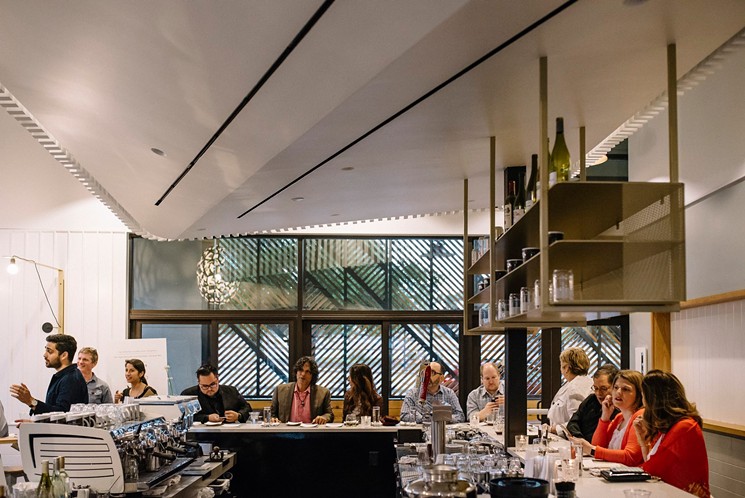 If Houndstooth's new location is half as gorgeous as its Sylvan Thirty spot, we're in for a treat.
Courtesy of Houndstooth Coffee's Facebook page
Houndstooth Coffee No. 3
Last week, Houndstooth Coffee announced that it'll soon be opening cafe No. 3 in Dallas, but this one has some fun twists: The new location will be next door to the new sustainable home supply store TreeHouse, which means it "will be powered by solar energy and employ renewable and sustainable building materials and practices," according to a press release. If the new cafe is anywhere near as gorgeous as the location in Sylvan Thirty, this solar-powered coffee shop will be a real stunner.