The Cosmopolitan at Shoals, the best new bar to open in Dallas this year. Melissa Hennings


This time last year, looking back on 2016's new bar offerings was a bit underwhelming. There were a couple of breakouts — one year in, Jettison is still one of the city's best cocktail spots — but otherwise, the Dallas bar and cocktail scene didn't get the shot in the arm it really needed. Then came 2017.

Much has changed this year, not just among bars but among the neighborhoods they call home. North Oak Cliff, particularly Bishop Arts, is still being torn to pieces by developers promising massive changes that no one who lives there asked for. In Uptown, nightlife establishments are defending their practices after the city suggested the scene has gotten out of hand, and it's an issue we'll hear a lot more about in 2018. Deep Ellum has continued its ludicrous explosion, bringing in questionable new concepts that feel grossly out of touch while also seeing a boom in stellar locally owned establishments that give us hope for this ever-changing area.

Multimillion-dollar rooftop patio bars, alcohol-slinging "amenities" built into luxury apartment complexes, developers courting bars as anchor tenants in massive, high-dollar projects — the neighborhood watering hole has, for better or worse, become so much more than what it used to be. With even more changes on the horizon in 2018, we looked back on 2017 and the new bars that helped move our city's nightlife culture forward.

You won't spot much of the technology used at Hide, but you will occasionally witness bartenders using machines like this one, which injects the gin and tonic with high-grade carbon dioxide to create carbonation.
Melissa Hennings
5. Hide
When we first heard about Hide — a Deep Ellum "cocktail laboratory" that uses centrifuges, lasers and roto-vaporizers to purify and intensify the taste of ingredients — we felt certain it would be too gimmicky to be worth a damn. We were wrong. After opening in early 2017, Hide continues to serve unpredictable cocktails with unfamiliar ingredients (cardamom tincture, milk-washed Darjeeling tea vodka, Champagne acid), but these tasty drinks rise above the gimmick. Hide is fun whether you're sipping a curiously blue-hued gin and tonic from a Champagne flute or going to town on the cheap happy hour burger.

Bourbon & Banter's cocktail menu is filled with fun, cheeky cocktails with curious presentations.
Beth Rankin
4. Bourbon & Banter
As part of the Statler's multimillion-dollar facelift, the downtown hotel added several new food and drink concepts, one of which is tucked away beneath the modern new lobby. To get to Bourbon & Banter, you'll head downstairs into a small wood-paneled room with only a shoe shine setup and a payphone. A host will inquire about your party before entering the phone booth and dialing in a code that opens up a previously hidden door leading into the small, dark speakeasy. This "swanky underground lounge" boasts a hefty bourbon selection and a cheeky menu of $15 cocktails that come garnished with everything from a bruleed exterior that requires cracking to a pink libation adorned with the word "FUCK" printed on wafer paper. Already a favorite among out-of-towners and those of us showing them around, this dark cocktail lounge quickly became one of our favorite date night (or girls' night) bars of 2017.

The Parlor on Commerce is as laid-back and straightforward as it gets, which is why we love this bar so much.
Alison McLean
3. The Parlor on Commerce
The Parlor on Commerce opened at the tail end of 2016, but this year, we kept coming back for the pub ambiance, excellent whiskey selection and mind-blowing patty melt. This Deep Ellum bar attained a status we thought was unattainable: the new dive bar. Designed with mismatched floor slats from an old gymnasium and a bar top pieced together from a demolished boxcar, the Parlor has an old-school vibe with fun touches like a vintage Playboy pinball machine. Why does this bar succeed where other new "dive bars" fall short? For one, it doesn't try so hard — it just is. When you walk into this bar, even for the first time, you feel like you've been here a thousand times, and the attentive, no-nonsense staff treats you accordingly. 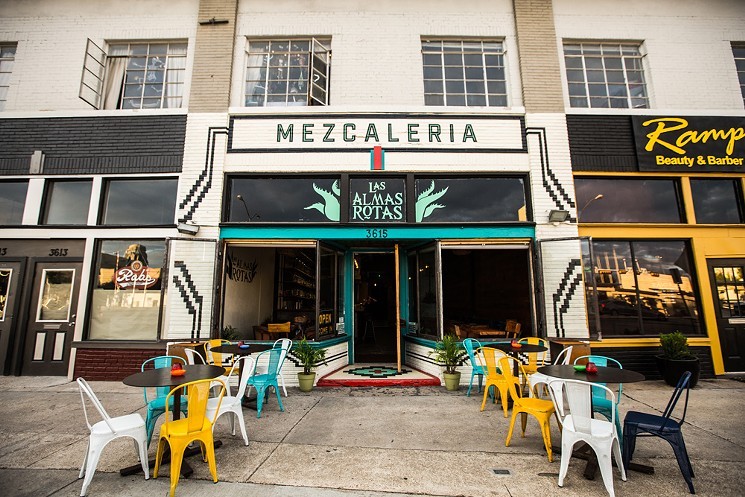 Las Almas Rotas brings a pop of color — and some killer mezcal — to Expo Park.
Melissa Hennings
2. Las Almas Rotas
One of the city's best new bars was a bit of a gamble: an Expo Park mezcaleria reverently dedicated to Mexican distillates. From the patio out front, you can watch the trains come and go from the Fair Park DART station, but inside, the world melts away as you settle into church pews upholstered in crushed blue velvet and a candlelit back bar that feels like a (respectful) religious shrine to this increasingly popular agave spirit. There are a few cocktails and a small list of Mexican beers, but Las Almas Rotas really shines when you delve into the extensive mezcal menu, sipping this smoky spirit straight. Don't know where to start? The staff will happily guide your mezcal (or sotol or tequila) journey. The small menu of stellar tacos and superb bar snacks only sweetens the deal.

Shoals' laid-back midcentury modern decor makes this new bar one of the coziest cocktail spots in Deep Ellum.
Melissa Hennings
1. Shoals
The best new bar in Dallas is an antidote to what many see as the Uptown-ification of Deep Ellum. The neighborhood has seen an influx of new bars and restaurants that feel inauthentic and out of touch with Deep Ellum's vibe, but Shoals is everything those new establishments are not — it's cozy, attentive, straightforward and thoughtful. An homage to Muscle Shoals, Alabama, the bar puts as much thought into its menu of $10 classic cocktails as it does the stellar collection of vinyl behind the bar. Owners invested in a high-end sound system so guests can feel every crackle and pop from vintage and new records by everyone from Wilson Pickett to A Tribe Called Quest. The laid-back midcentury modern decor makes the place feel endlessly welcoming, and the above-and-beyond service makes you want to stick around until last call. (The amazing bologna sandwich doesn't hurt, either.)