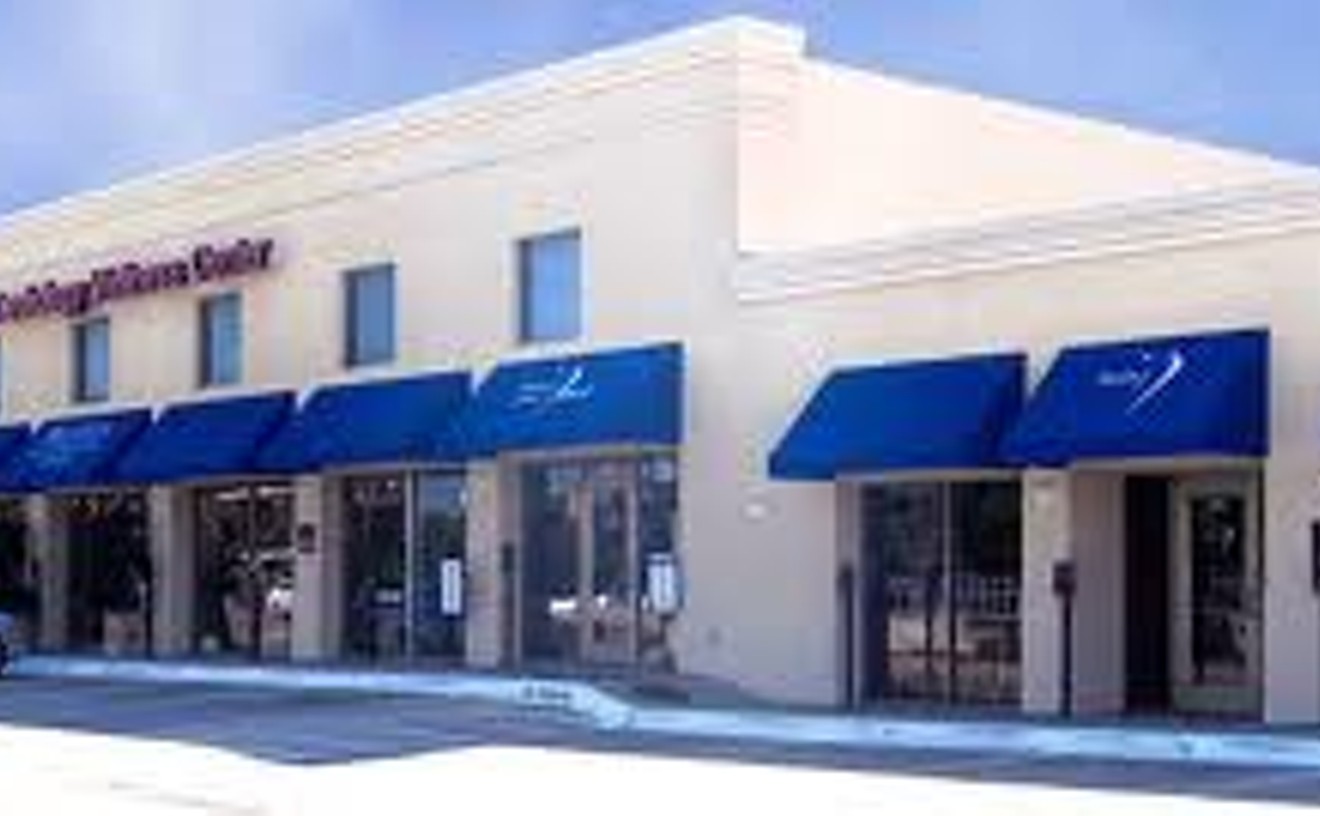 Buster Cooper can't stop dancing. Now in his mid-80s, the veteran tap master still teaches new generations of hoofers the intricacies of the art form he pioneered in Dallas more than 60 years ago. For half a century Cooper owned his own studio, and for 30 years he served as head of the dance department at Hockaday School. Patrick Swayze and Sandy Duncan are among his alumni and others have gone on to dance on Broadway in leading roles in A Chorus Line, 42nd Street and Cats. This summer the twinkly titan of tap took the stage in a special pre-show spectacular at the Dallas Summer Musicals' performance of The Drowsy Chaperone. His technique still is flawless, his crowd appeal greater than ever. Thanks, Buster, for giving your life to Dallas' dancers and never shuffling off to Buffalo.

Every Monday night "Mama" Amy Stevenson invites friends to sing on the tiny stage of this friendly Oak Lawn gay bar. She brings in new talent and some who've been around a while and just like to get up and sing. Opera singers, belters, budding Broadway divas—even a few comedians and jugglers—have shared the teensy stage at this weekly show. Among the regulars who stop in to perform are Cedric Neal, John Venable, Paul J. Williams, Ryan Roach and Gregory Lush. Want to get onstage? Just ask Stevenson. As the song from Chicago says, "When you're good to Mama...."

It's not just us. An informal poll of people close to the local television news biz confirms what we were going to say anyway: Channel 8 at 10 p.m.—well, pretty much Channel 8 all day long—towers above everything else in the market. They win on just about every score, especially the "deep bench" issues. Reporters Jim Douglas, Byron Harris, Gary Reaves, Brett Shipp, Brad Watson—they're the quality long-ball hitters who give WFAA its authority. But the newbies, Craig Civale, Chris Hawes and David Schechter, are examples of serious, effective journalists coming along fast. Station president and general manager Mike Devlin comes from the news side, which helps. We know this: Channel 8 has history in the market and with the market. People take it seriously. That's worth something when the product you're selling is the truth.

People of Deep Ellum, we want to believe in your cause. We all love live music, walkable neighborhoods, Blind Lemon Jefferson and independent businesses. We're always right there with you when you argue against West Village-style development and extol the merits of real culture. But then you start to go on and on about Edie Brickell and New Bohemians or Fever in the Funkhouse or some other band whose work has not aged particularly well and our eyes glaze over. And while we're on the subject, you might think about retiring the whole "Nirvana at Trees" story for a while too. Granted, it's a good one, but we've heard it so many times, it's starting to sound a lot like grandparents' nostalgia. Just sayin'.

Best Way to Extend Your Night Out 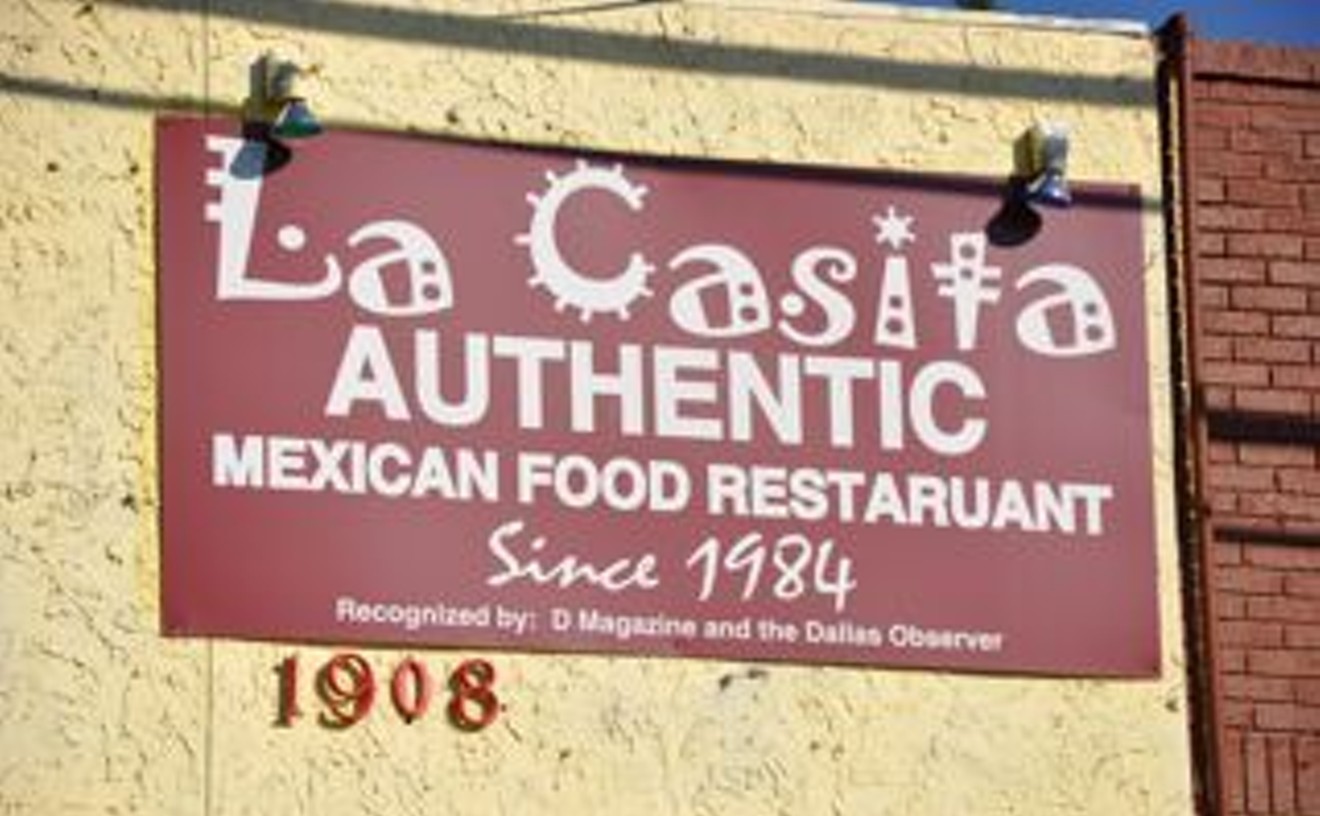 La Casita's kind of a hole in the wall. You'd miss it if you didn't know where it was (a few doors south of The Cavern), and you'll never eat there unless you're nocturnal like the people who run this deliciously authentic Mexican dive are: The restaurant's hours are a little ridiculous, opening at 8 p.m. and closing at 5 a.m. But the place has been open for 24 years and, over the course of that existence, it has built up quite the loyal base of regular late-night eaters. Plus, it's the only place I know of where you can get a tall, cold glass of apple juice after the bars have closed. If, um, you catch my drift.

Best Way to Have a Gay Day

How do the gays always seem to be the first to know...everything? Like how to keep abreast of local festivities. And where to get new breasts. For those savvy souls who insist on keeping up with all the timely tea, Gay List Daily is pouring the brew. Delivered directly to your e-mail inbox, Gay List Daily, created by Dallas PR pro Cooper Smith, is dedicated to making the trendy gay individual even more trendy and gay. Readers aren't always gay, and the content won't always be fey, but the commentary is always fabulous. Mary, it's free! 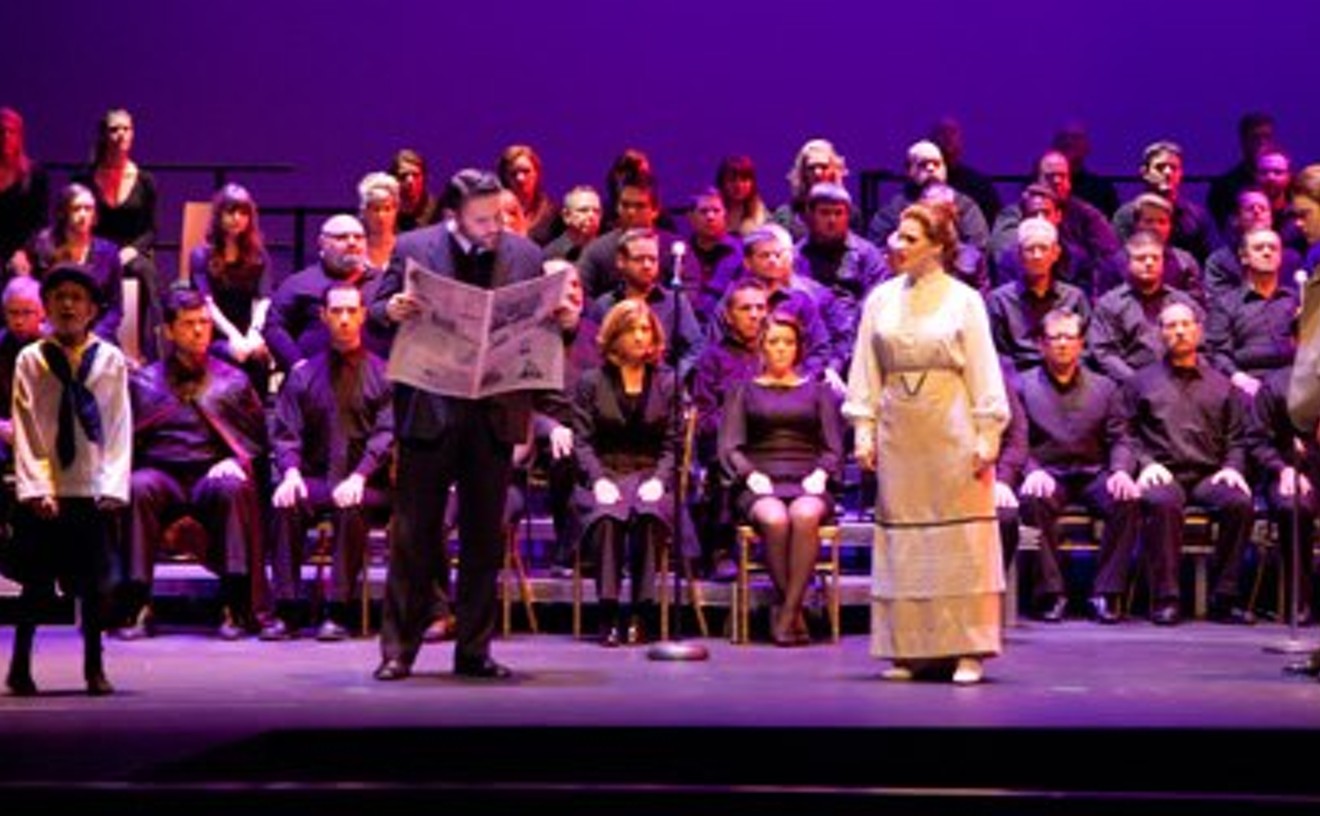 When he's older, Andrew Phifer would like to play Elwood P. Dowd, the delusional lead in the old comedy chestnut Harvey. For now he's content being cast as callow youth, such as in recent co-starring roles at Uptown Players (Bent) and Theatre Three (House and Garden). He's good at playing teenage boys hopelessly in love with boys and/or girls. "It does a soul good" to dive deeply into emotional waves, says the lanky 24-year-old, who grew up in Jacksonville, Texas, and graduated from Austin College. A future in dramaturgy or arts administration is a possibility, says Phifer, but for now he's happy to bounce from theater to theater. Best advice he ever got? "You're always auditioning," he says. "Your professionalism, or lack thereof, on one show can create a reputation." His rep so far? Good guy, great young actor. 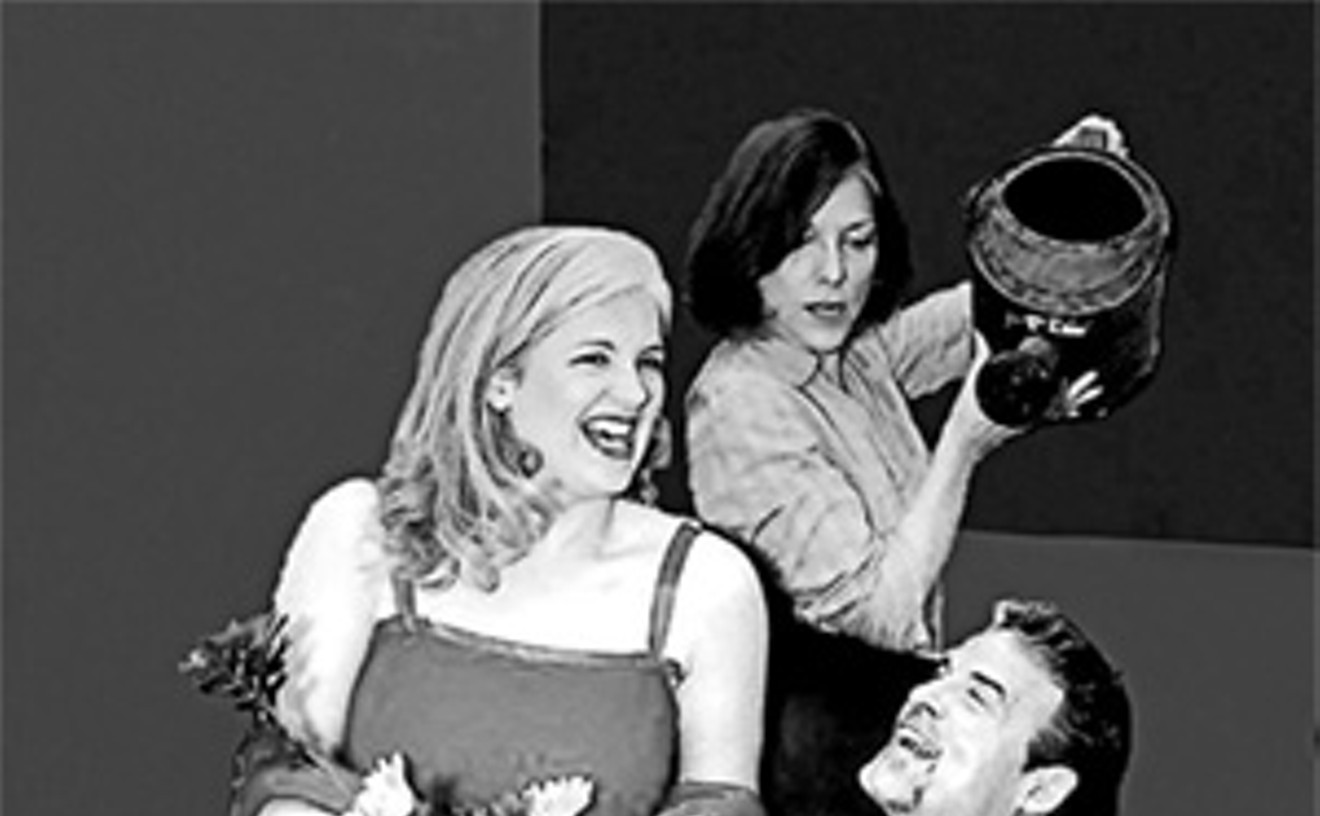 She's 27 and looks 17, something petite redhead Maxey Whitehead has used to great effect in performances at WaterTower, Theatre Three and Second Thought Theatre. The Addison native and graduate of Texas State University specializes in playing wayward kids, and no role was more troubled than Lissie, the runaway shacked up with her high school teacher in Steven Walters' gritty play Snake Eyes at the Mardi Gras Motel, performed at Second Thought. It was "just a blessing of a role," says Whitehead, who was absolutely riveting in the part. "I got to work with an incredible company of people, and I had never played a part like that before." Calling Dallas "a lovely place to work" as an actor, Whitehead hopes to move away from teenage roles and into ingénue parts. "I am an actor because I think the world today is starving for truth and bravery," Whitehead says. "I believe that's what people come to theater to see, and it is my goal every day to serve them with my nerve and imagination." That's worth applauding.

In 1958, with the new Kalita Humphreys Theater rising on the east bank of Turtle Creek, architect Frank Lloyd Wright made a prediction about his then-ultra-modern edifice: "One day this will mark the spot where Dallas once stood."

Audacious, perhaps, but an interesting observation about the often underappreciated significance of the performing arts in big-city history.

Half a century from now, Wright's poured-concrete marvel may be as dusty and forgotten as Margo Jones' once-revolutionary theater-in-the-round in Fair Park (still there, but seldom used since Jones' death in 1955). In 2009 the Dallas Theater Center company moves out of Kalita, where it has produced shows since 1959, and into the new $60 million Dee and Charles Wyly Theatre at the Dallas Center for Performing Arts downtown.

Dallas theater, it seems, always has reflected a tendency of status-seeking audiences and benefactors to equate great art with how impressive the building is around it, the shinier and newer the better.

By 2058, however, the Wyly, designed by international architecture star Rem Koolhaas, will be the same age as Wright's Kalitais now. And what arebeing touted now as the Wyly's whizbangtechnical gewgaws (computerized lighting!) and "cutting-edge" theatrical design features (hydraulic rows of seats!) could be as old-fashioned as gas footlights and trapdoors were when Wright planned Kalita Humphreys.

One thing's for certain, though: Whatever the year, whatever the venue, people will still gather to hear live actors and probably not wispy holograms speak lines from Medea, Hamlet, Our Town and A Christmas Carol. These are the "classics." Year after year, decade after decade, these plays never seem to go away (no matter how much some critics and theatergoers wish they would).

Live theater has lived on through the millennia with only the occasional blackout. In ancient Rome, the government shut down theaters, calling them centers of politically subversive thought. That ban lasted more than 1,700 years, well into the Christian era. The Renaissance stirred the arts back to life, and it's been the smell of the greasepaint and the roar of the crowd ever since.

Art can be a fragile thing. But even in the worst of modern times, American theater has flourished. After 9/11, large regional theaters such as Dallas Theater Center struggled to survive as corporate donations and individual ticket sales shrank. But actors need to act and playwrights didn't stop typing new plays. So in Dallas and around the country, new, small theater companies popped up, performing in community centers, public libraries, art galleries and other low-overhead acting spaces. In Dallas it's possible to see up to five new productions every week of the year, produced by more than 60 active theater companies on stages as large as the Music Hall at Fair Park and as tiny as the basement-level Theatre Too. From splashy Broadway musical road companies to tour de force one-man shows at the Festival of Independent Theatres, the range of talent currently treading local boards is impressive and encouraging.

That bodes well for the future of the arts here, say theater directors. "In 50 years, I'd love to have a theater community in Dallas not unlike Chicago's or Seattle's," says director René Moreno, who has staged shows at Contemporary Theatre, Theatre Three, Uptown Players and Dallas Theater Center. "I'd love for this to be a place where artists can come and put roots down and really grow and do great work. Maybe have several big Equity houses, not in competition with each other, but with different points of views and different goals. I would hope that by the time we get to 50 years from now, we have several organizations as big as Dallas Theater Center." (DTC is the second-largest League of Resident Theatres member company in Texas, behind Houston's Alley Theatre.)

Technological improvements aside—maybe someday someone will invent a microphone pack that doesn't short out on opening night—theater will always be about audiences sharing space with living, breathing actors.

"I hope it never stops being that," says director Cheryl Denson, who's worked in Dallas theater more than 30 years. "The excitement of theater has always been in human beings responding to each other without being manipulated by technology."

Moreno says he'd like to see theater production get simpler, less dependent on technology and special effects. "There's nothing like being in a theater with live actors onstage. It's a need people have in their community," he says. "Technology won't kill theater any more than movies killed theater. In the end what theater is about is storytelling. It goes back to people sitting around a campfire and someone telling a story that could perhaps change someone else's life. That's what it was, is and will always be." Elaine Liner