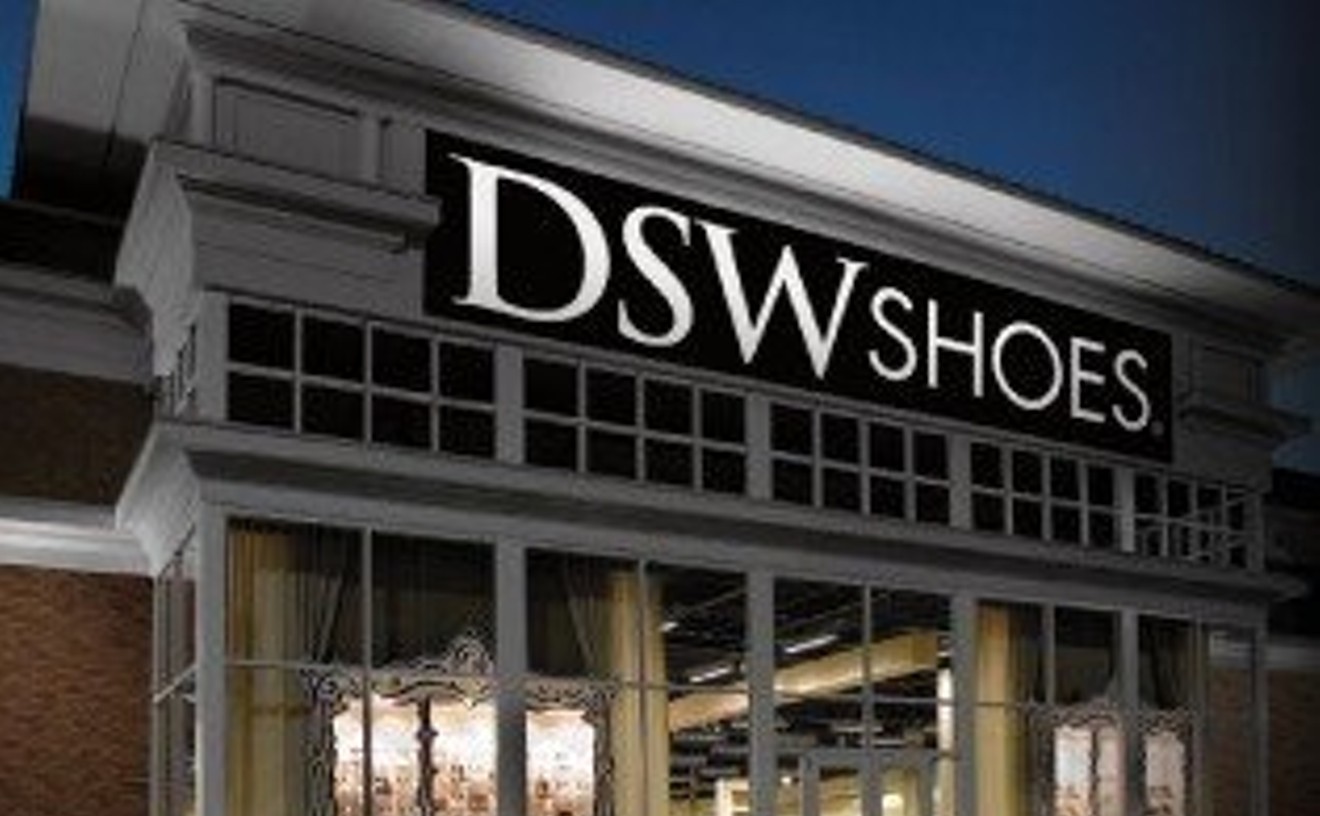 High-quality, low-priced kicks for well-heeled ladies (and not a few men) are the specialty at DSW. The store's spacious, self-serve selling floor is organized into row after row of shoes classified by type: stilettos, platforms, pumps, clogs, flats, wedges, boots and sandals. The shelves are low, perfect when you're perched on a stool and looking to grab the box with your size in it. If there's a style you've been searching for at the mall, or maybe you like a certain style your budget can't quite allow, you could find it here at a discount. From the high-end Carrie Bradshaw pumps to sleek leather boots to everyday sneaks, DSW rules for variety of style and sizes. And pay attention to the colored stickers that indicate further heavy markdowns, which happen often.

MARKET: It's a Small World

To seafarers sailing in deep water in the middle of the ocean, a tidal wave is virtually undetectable. A sudden shift of the earth undersea sends great pulses of energy across the water, and they pass unfelt under a ship's hull only to reveal their power at some distant point onshore.

Seismic shifts in science roll across time in similar fashion. Sloppy housekeeping in Alexander Fleming's laboratory led him to unearth penicillin in 1928—a chance discovery that decades later revolutionized medicine. Physicist Max Planck theorized about quanta of energy in 1900, not realizing that he was giving birth to a branch of physics that would lead us to modern chemistry, nuclear physics and iPods.

Somewhere, maybe today, the next wave of scientific discovery is quietly propagating. Will the next innovation to rock our world and marketplaces be spun from threads of carbon atoms woven into super-lightweight sheets of fibers stronger than steel and 1,000 times better at conducting electricity than copper? Fifty years from now will we be coddled by tippling robots whose artificial muscles are made of elastic metals that draw energy from alcohol? Will our electrical grid pull power from devices that convert waste heat from manufacturing processes?

If Dr. Ray Baughman and the team of researchers and students he directs at the Alan G. MacDiarmid NanoTech Institute at the University of Texas at Dallas have their way, the answer is yes to all of the above. In spare, fluorescent-lit labs on UTD's Richardson campus, Baughman and his fellow scientists from across the world are probing the very small world of nanotechnology, shoving about and rearranging materials at the molecular level to create "biomimetic" materials that imitate nature, to weave wonder fibers or to build new fuel cells to harvest energy, among other potential creations.

Maybe they should start by mining energy from Baughman himself. A frequent world traveler and tireless proselytizer for nanotech, Baughman's words skip like stones across a pond as he quickly shifts topics while leading a visitor through a quick-paced walk through the institute. Two themes ring clear through the rapid patter: America needs trained minds to undertake the institute's research, and Baughman wants those minds to be Texan—even if they are, like Baughman, adoptive Texans.

"Right now we're in crisis," he says. "Americans are not going into the sciences."

To compound the problem, security worries after 9/11 have put up barriers to immigration that are keeping some of the best-trained minds at home in places like India and China, which are challenging the United States for leadership in research.

"We're a nation of immigrants," Baughman says. "We've been fed bright people from all around the world, and that's not happening now."

Nevertheless, the institute draws students and researchers from Korea, Spain, Ukraine, Ireland, the Philippines and Brazil, among other places, and Baughman is particularly proud of its NanoExplorers program, which since its launch in 2002 has trained about 35 high school students, who took part in original research under the institute's guidance.

Originality and curiosity are hallmarks of young and innovative minds. Those who struggled through high school math and chemistry might consider science the worst sort of drudgery—especially if they never had a teacher like Baughman, who bubbles with the creative vigor that fuels science's "eureka!" moments. Shifting about his office, reaching among reams of paperwork for patent applications on the shelves, he pulls down a collection of toys and knickknacks: a vase made of sticks woven in a loose-hinged netlike pattern that expands laterally as it's stretched, which he picked up at a restaurant in Sicily; a Mexican bowl cut in a flexible spiral from a single piece of wood; a springy animal toy from Australia whose head turns as its body stretches.

To Baughman and the institute's students, the curios suggest ways of arranging molecular structures to create new types of materials and artificial muscles that replicate nature. Of course, motion requires energy, and finding new ways to capture, store and convert energy is high on the institute's list of priorities.

"Our programs are focused to what we believe are important needs. The energy crisis, of course, is paramount," says Baughman, who earned a doctorate from Harvard and worked in private industry for 31 years before making Texas his home seven years ago. He's since become an enthusiastic booster of the Lone Star State, persuading three of his four daughters to settle in the state by singing "Deep in the Heart of Texas" to them, he says.

Laudable goal, but it leads to some obvious questions: What will the next great innovative nanotech device be, and when can we buy it?

Baughman can't say, so we ask the next-best question: Does he feel that he's riding the edge of the next great wave of science?

Even then, he was right. Patrick Williams

They're scattered all over town, from far north to deep south, but a few months ago, the supermarket—with its wall of breads and pastries, its open grills sizzling spicy chickens, its rows of fruit juices beckoning in bright neon, its sides of beef and pork hanging in see-through freezers, its rich spread of inexpensive produce—opened at the northeast corner of Walnut Hill and Marsh lanes, where, many moons ago, once stood a Baskin-Robbins and Lantrip's Pharmacy. The neighbors were at first panicked about the addition; the ignorant spread fliers warning of increased crime, what with all those brown people congregating in a Northwest Dallas neighborhood where the immigrant is already the majority. But now, its aisles and taco counter (and, really, the barbacoa in adobo is to be savored) are a multiculti experience—and a far better trip than to the next-door Wendy's, no offense.

Best Place to Pack Up Your Life 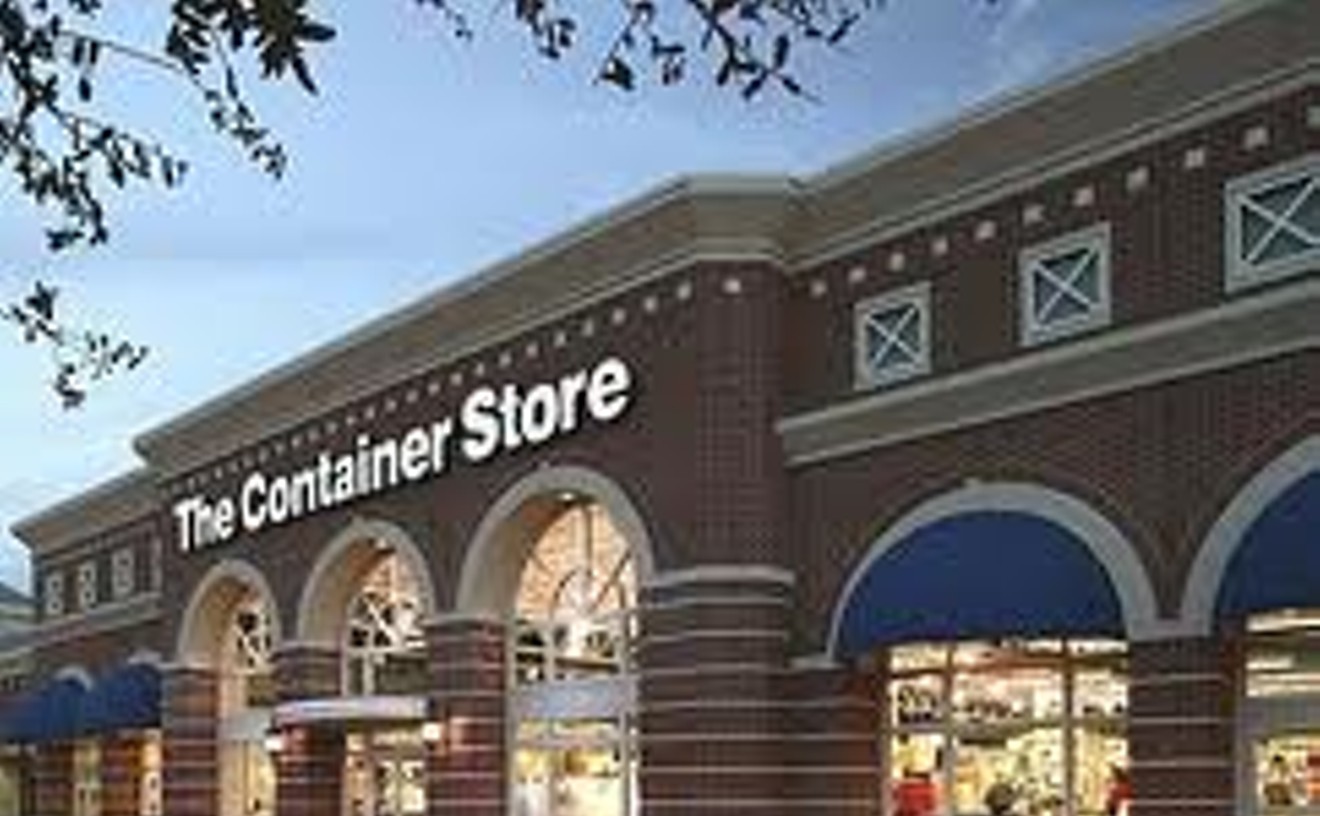 If you have to pack up all your belongings and move your ass in a hurry then you're gonna need boxes— and lots of 'em. Sure, you can always drop by a grocer or a liquor store and beg for free empties, but then you're gonna end up with a ragtag stack of random cardboard boxes that held everything from bottles of vodka to jars of baby food. But suppose you need to pack up hundreds of vinyl records or your collection of Star Trek memorabilia. Where can you go when your packing needs require the safe accommodation of items with incredibly specific or dreadfully unusual dimensions? It's easy. Just drop by The Container Store. Living up to their name, they stock boxes, tubs and crates of every width, length, height and depth. If you can't find the right container for the job, then it may be time to consider downsizing your collections. Yeah, we agree that the shop's fluorescent lighting and incredibly overeager employees can be a major turn-off, but it's worth it to know that when you unpack your prized LPs or William Shatner goodies everything will be safe, sound and pristine.

It's been more than 44 years since Joe Jansen, founder and owner of Goody Goody, bought the Goo Goo liquor store on Greenville Avenue, added a "dy" to the end of each word, and turned it into a multimillion-dollar business with 12 stores spread across the area. The secret to Jansen's and Goody Goody's success has been a continued focus on offering a kick-ass selection and prices. If you need it, they most likely have it in stock. If they don't, they'll get it for you. And all with some of the lowest prices in town because the company also wholesales booze to more than 600 area hotels and restaurants.