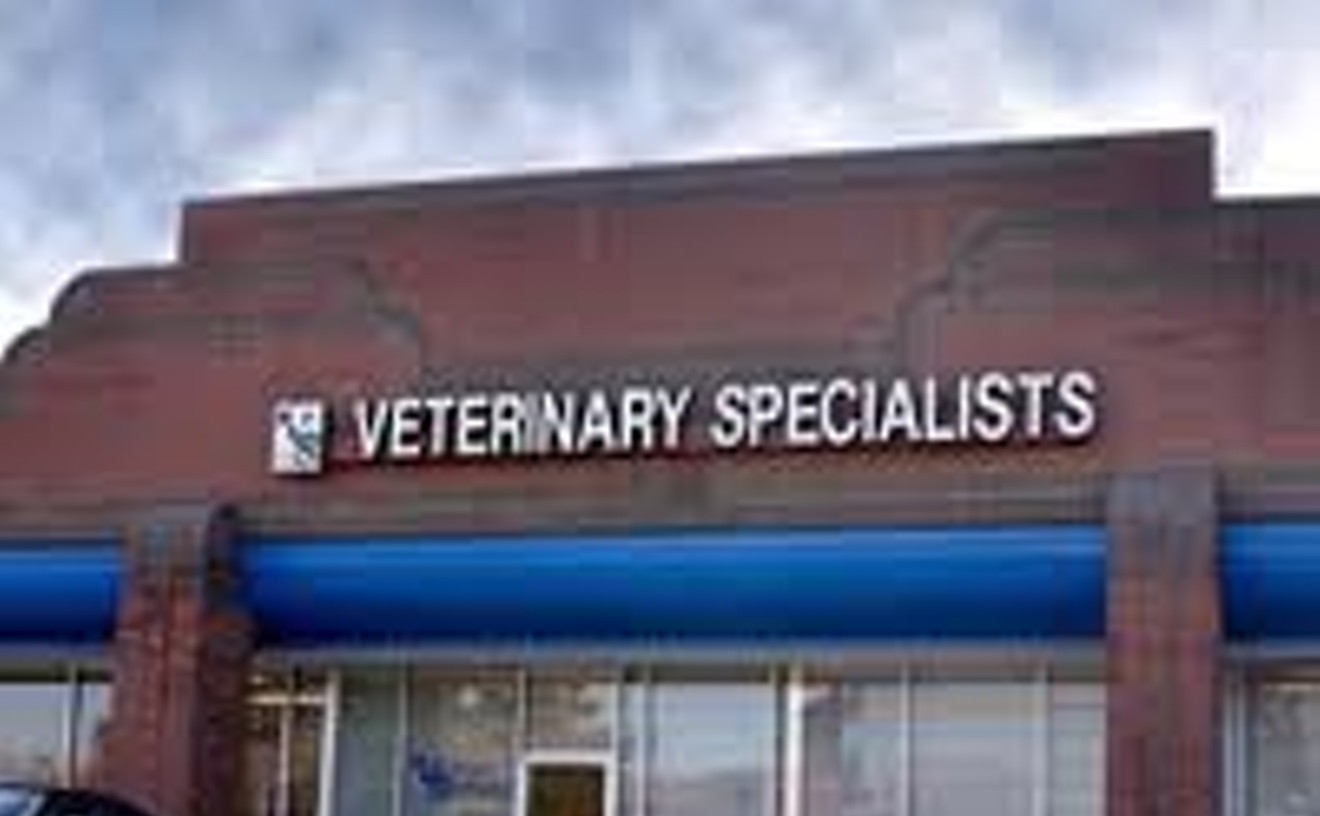 It's emotionally trying when a loved one is diagnosed with a potentially terminal illness. Some experts acknowledge that when that loved one is a furry innocent with four paws, it can be even tougher to deal with. It takes talent, skill and strength to treat our best four-legged friends, and a calming, reassuring disposition to deliver the diagnosis to pet owners. Dr. Richard Scroggin and his team of Veterinary Specialists of North Texas—Cheryl K. Harris, DVM; Philip L. Treuil, DVM, MS; and Sandra M. Axiak, DVM—are friendly but professional and go to the ends of modern technology to find the answers to kitty and doggie maladies, including various forms of cancer. Scroggin, in particular, is patient and caring in his examination of animals and in helping owners determine the best course of treatment. He nobly takes the "if it were my baby" approach when advising distressed humans and, thankfully, delivers information in laymen's terms. It's a gift to have the unconditional love of a pet, and with Scroggin and VSNT, we can give the kind and thorough treatment these sweet creatures deserve.

Best Place to Become a Fortuneteller

Depressed about this year's lack of new Harry Potter tomes? Get your fix of crystal balls, mystical creatures and divinations at The Silver Pyramid, a den of magical objects. The shelves are stocked with a variety of rocks and stones that hold special "energies," as well as crystal orbs, jewelry, quartz and "singing" bowls for meditation. Consult the pendulums, which respond to yes-or-no questions to provide guidance. But don't go to the Pyramid in a hurry. Owners Steve and Kathy Collins enjoy providing customers with detailed explanations of the products. Future cloudy? We predict you'll get some insight here (or at least have a good grin looking at all the stuff).

Best Place to Brew Up Something 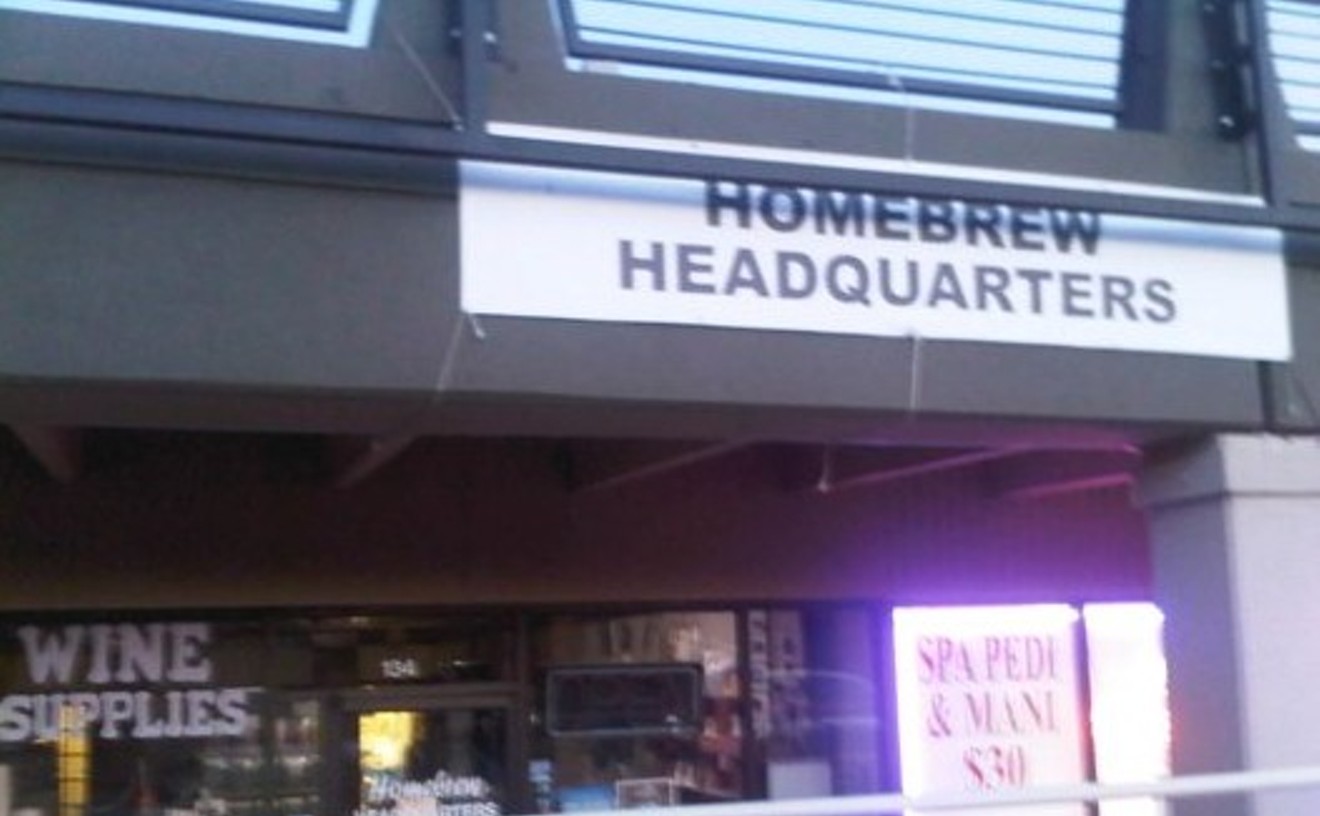 Wine has always been the ultimate enclave of snobbish foodies and wannabe gourmands. Other alcohols still haven't really caught up, though people are starting to discover that beer is more than just a fast route to cirrhosis of the liver. Microbreweries have sprung up around the country to meet the demands of beer connoisseurs. But for some, even a microbrewery isn't micro enough; if you want something done right, you've got to brew it yourself. And Homebrew Headquarters will be glad to help you do that. Don't be deceived by its strip-mall appearance: A couple hours in this place and they'll set you up with everything from carboys to malt to a recipe book of tasty brews. And don't be afraid to ask questions; these guys speak the language of lager...and stout and ale and pilsner and...

Best Place to Button Up

It's not like you need more than one try to guess who's going win best record store, but not every music junkie can reside within walking distance of Greenville Avenue. Living north of the dial, some of us need to find a dealer a bit closer to home to get our fix. Tucked in a strip mall just off Texas Highway 190 in Carrollton, CD Addict carries new and used records, CDs, videos, DVDs and posters. Oh, and buttons—cannot forget the buttons. Shoppers can flaunt their fondness for everything from a favorite indie band or glam icon to an '80s TV show or classic horror flick. With a rotating supply of nearly 1,500 different ones to choose from, expressing your self via pinback becomes a simple task. (Unless, of course, you have a hard time deciding which flair you can't live without.) Last year, the independently owned shop celebrated its fifth anniversary. Living up to its name, fully loaded fixtures of CDs line the length of the store, and the back wall houses the racks of vinyl LPs and 7-inches, of which they stock a fat selection of rare and hard-to-find indie, hardcore and punk releases. No music snobs either; you'll get the same treatment whether you walk up to the counter clutching Death Cab for Cutie buttons, Neutral Milk Hotel on vinyl or Justin Timberlake on CD. 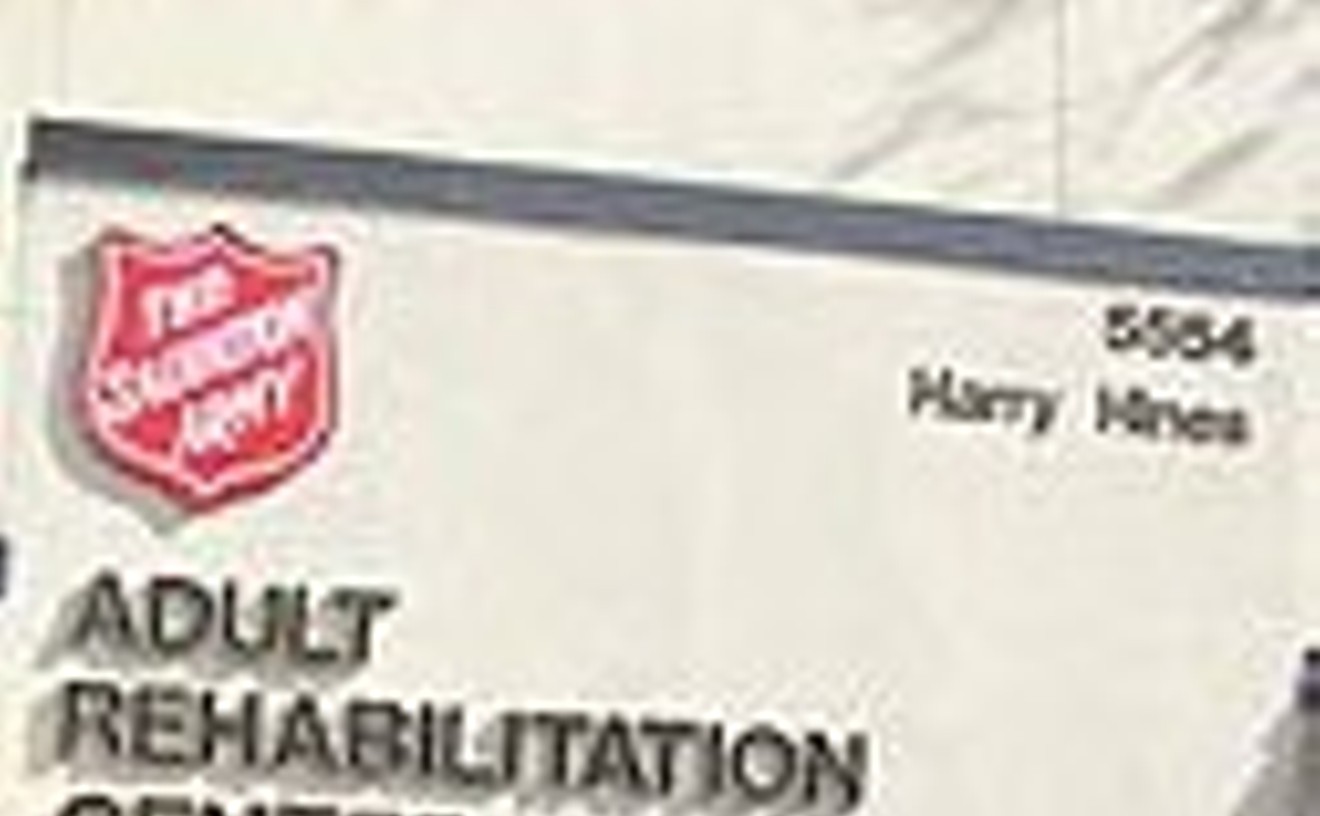 If you have Park Cities taste and a West Dallas budget, spend a Saturday walking the aisles of the Salvation Army Family Store (formerly called "thrift store") that splits the geographical and socio-economical difference between the two 'hoods. A mere 10 minutes from Highland Park, the store offers high-quality threads and furniture at jaw-dropping prices. The old concert T-shirt selection is pitiful; the men's shirt selection reveals a general preference for polo and golf over heavy metal. But Brooks Brothers suits for under $50 and huge leather couches for $200 more than make up for the lack of hipster garb. Check periodically, as you never know when a Parkie is going to send the hired help over with a Bentley-load of last season's fashions. 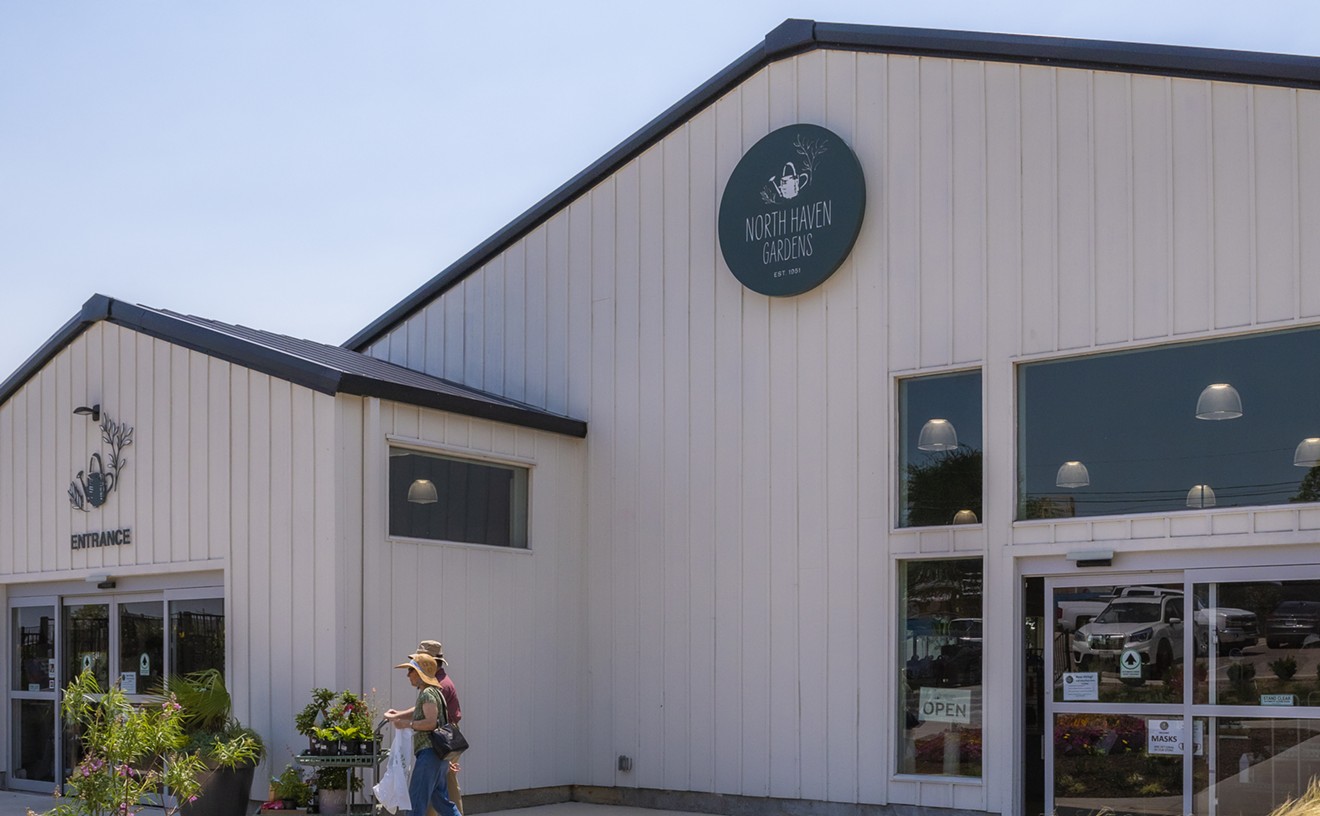 North Haven is a no-brainer when it comes to one-stop shopping for your entire garden and landscaping needs. It combines three things that everybody loves: affordable prices, great selection and a knowledgeable staff. From trees to shrubs, grasses to herbs, vines to roses and annuals to perennials, they've got it all. North Haven also has weekly specials, and if somehow they don't have what you need, they'll get it for you. No gardening question is too dumb or too detailed, as the staff is equipped to handle customers looking for basic knowledge or those seeking extensive information. It all adds up to a tremendous experience, which usually ends up with you at the checkout hours later with a cart full of plants.

Best Place to Get Chapped

It's the warehouse of fetish wear: Thousands of square feet of masks and hats, bondage bracelets and harnesses. From thumb cuffs to full-body suits, Leather Masters can whip you into the kinky outfit of your wildest desires. Nobody judges, nobody really cares which way you bend. Clean, well-stocked and well-staffed, this outlet for the outlandish can't be beat for brand-spanking-new spank fashion.

Best Place to Get Down (Dog) 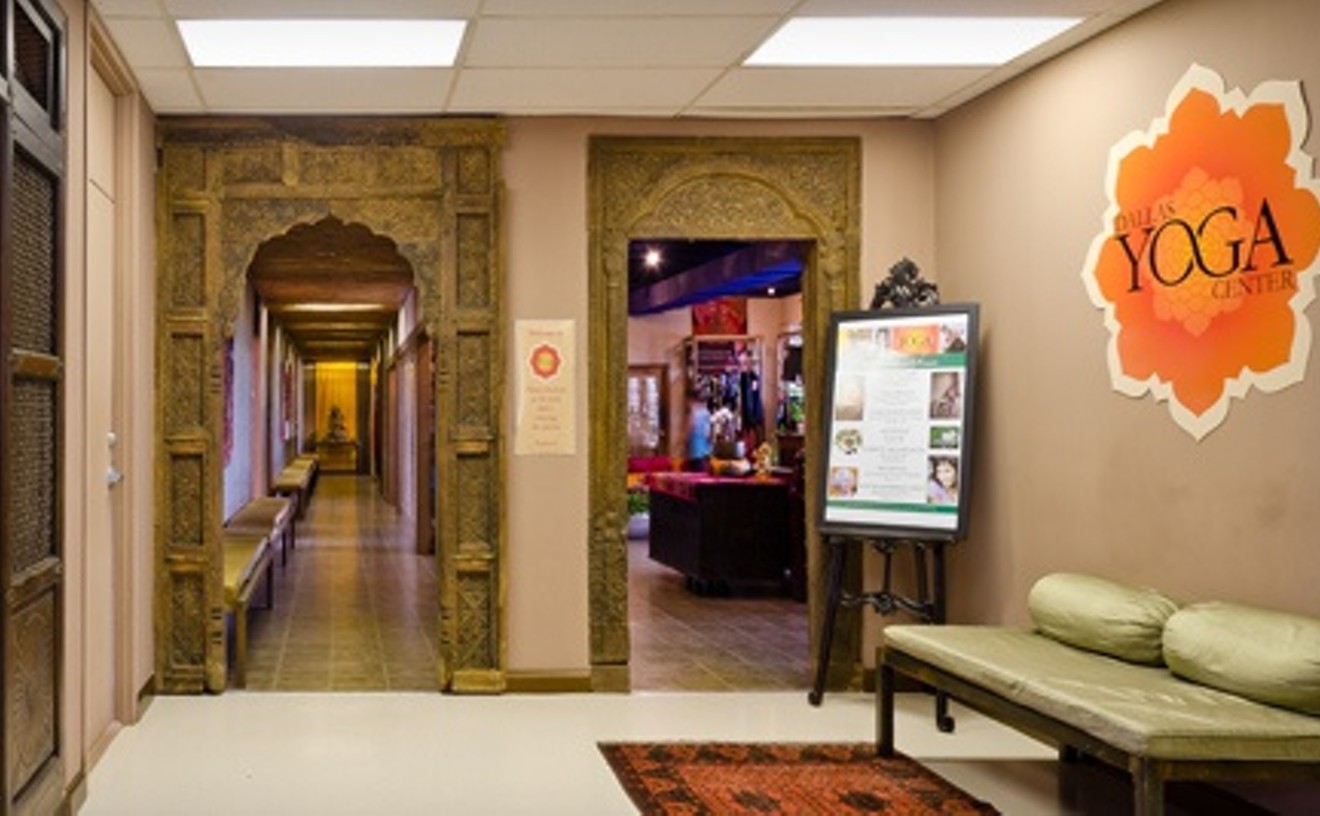 If you need an escape from rush hour traffic, piles of work at the office or the colicky kiddos at home, Dallas Yoga Center is an oasis of calm. Housed in a drab, '70s-style office building located by the Greater Dallas Council on Alcohol and Drug Abuse (hey, yoga can help with those probs too), this yoga spot is entered through a lobby filled with bronze Buddhas, meditation chimes and fashionable, movement-friendly garb for sale. The center offers a range of classes, including ashtanga, Iyengar and vinyasa styles of yoga, as well as special workshops and teacher training. Take a deep breath, get into the downward-facing dog position and feel your stresses eased. It's the healthiest way to get bent into shape.

Best Place to Get Your Deaf, Dumb and Dork On 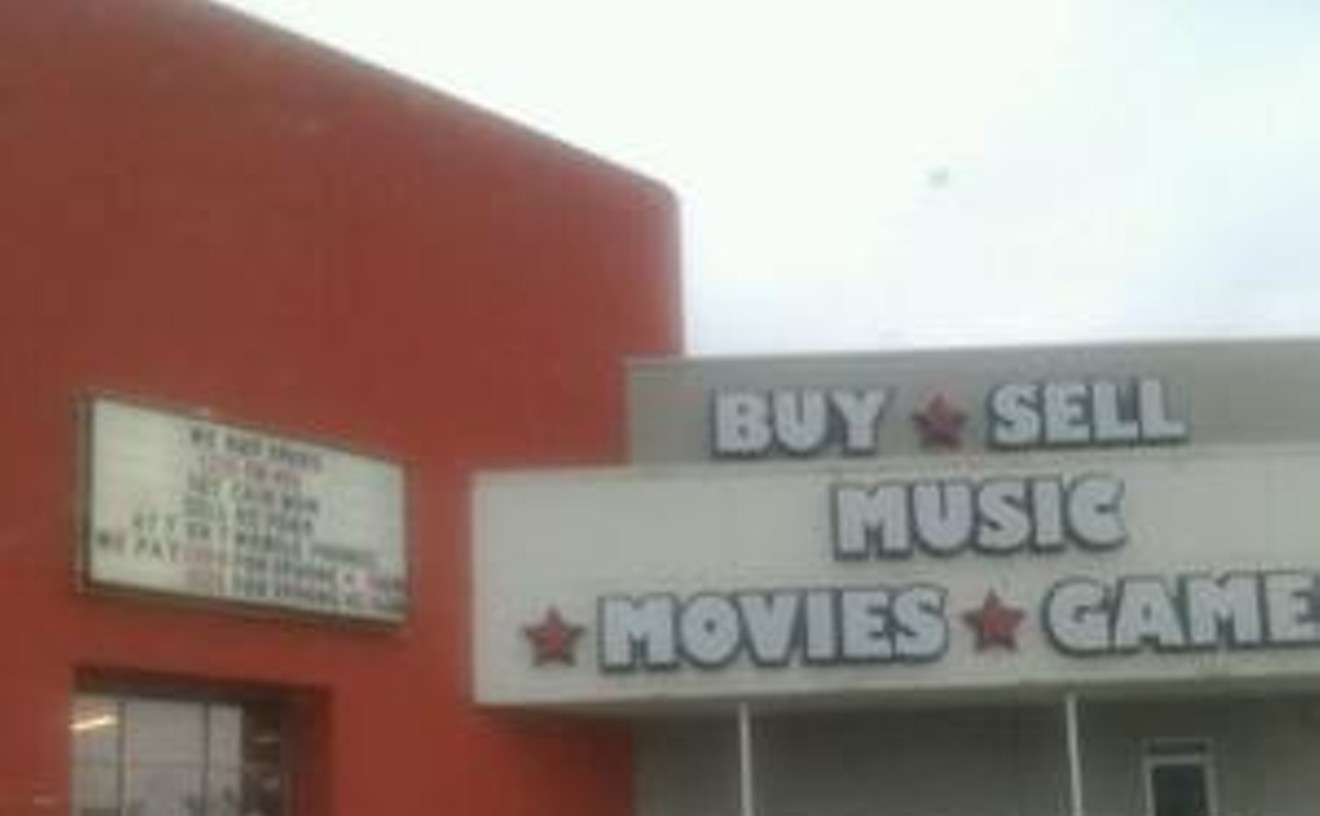 Not gonna lie: If you've never been, the idea sounds both sketchy and cheesy. Says the Web site, it's "the country's crunkest place to buy and sell new and used movies, music, videogames," where, so happens, they buy and sell used Wiis for $260 without pocketing a dime. Right, the Wii—still hard to find—retails for more than $300. But their salespeople are upfront about their Wii empire: They buy high and sell low in order to attract folks to the inventory of videogames, new and used, which are but one small piece of an enormous, glorious puzzle that, no kiddin', might just be the future of idiocracy in the best possible sense. Really, imagine: GameStop meets Tower Records meets Blockbuster meets Collectors Records meets CD World meets Apple Store meets Movie Trading Company meeting a former Michaels location also stockpiled with rock T-shirts, posters and, no kiddin', cheaply priced vinyl through which collectors sort through every weekend. Sorry if that's a bit rambling, but we spent a recent weekend in there, and the mind still reels just as the ears still ring from all the videogame demos and screening stations and classic rock coalescing into a single, impenetrable wall of noise.

Best Place to Go If You Insist on Feeding Your Animals 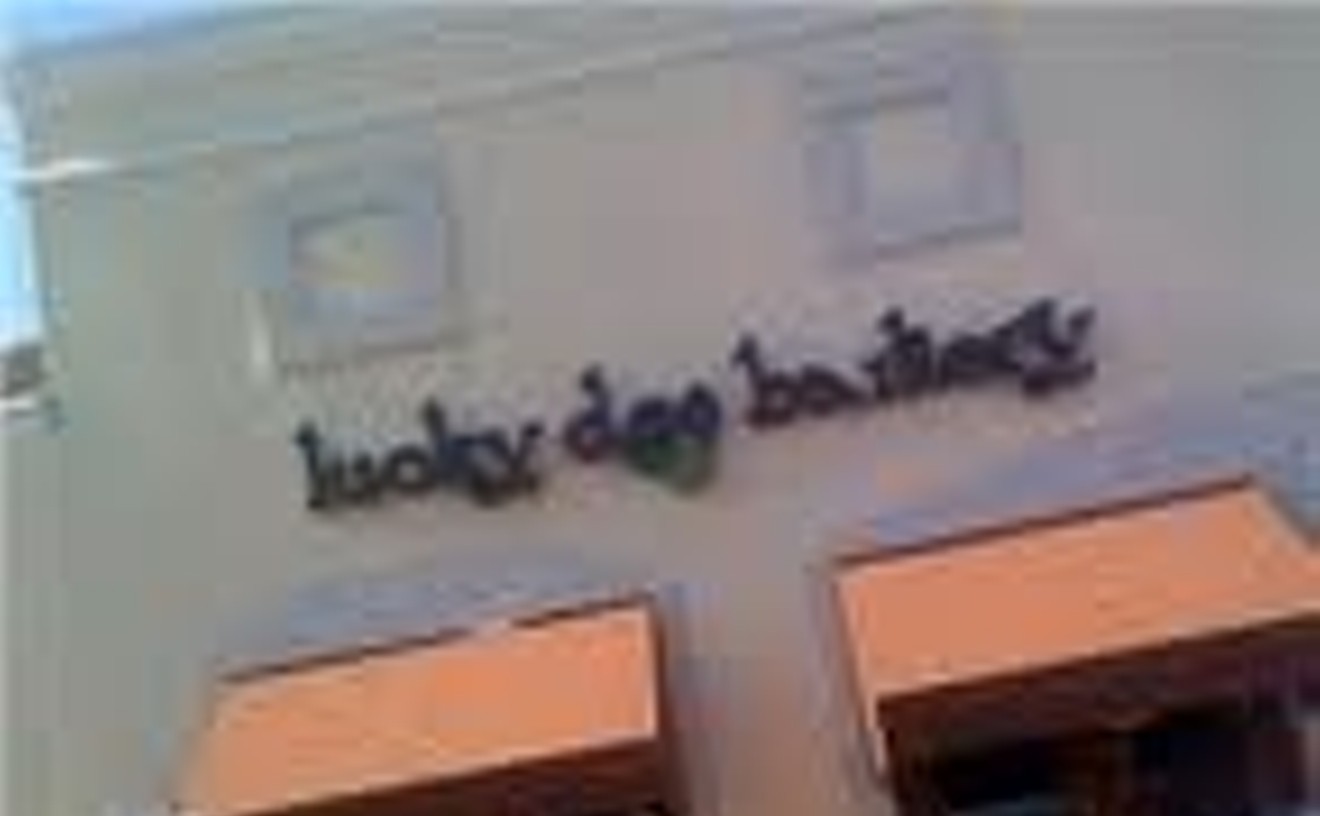 See, we don't want to tell you too much about our animals—four cats, let's say, and an aging yellow Lab once overcome by a stroke mid-stride. We don't treat 'em like we do the boy; ain't our children or nothin'. But, sure, they have special dietary needs—cats especially, little furry mess-makers. Vets never do right by our brood, even the best. So the other day we stumbled across The Lucky Dog Barkery, a lumberyard's worth of general store catering solely to cats and dogs and anything else that'd like to gnaw a tusk-sized rawhide or a flatted pig's snout that lands to the floor with a tinny thud. Owner Marsha Lindsey recommended changes to our cats' and dog's diets—steered from the vet's dry grains and toward a wetter, more organic diet. And, yeah, the gadgets are fun, but we come for the food in barrels and bags that make our animals like us just a little more than they loathe us.