Roots' duck-fat fried chicken has earned national attention. Alison McLean
If one were to pick a word that best describes the restaurant scene over the past year, whiplash would be a good choice. Last December, we were sliding into a bleak time with the COVID-19 pandemic. During the holidays we grappled with the desire to see family, eat out and meet friends at old haunts while potentially spreading the disease.

On Jan. 11 the number of Texans hospitalized by the pandemic peaked as restaurants wrangled with mask mandates and social distancing. It was a precarious game of staying in business while keeping staff and customers healthy.

But January also brought the rollout of vaccines. A massive drive-thru clinic in Denton was run with “Chick-fil-A efficiency,” a comparison we could all wrap our heads around. Just when it seemed like there might be a light at the end of the tunnel, we learned it was only Winter Storm Uri rolling our way. Restaurants were frozen out of what is traditionally one of the busiest days for restaurants, Valentine’s Day, quickly followed Fat Tuesday to boot. No power, no water — for certain no customers — then when the frigid cold left, pipes busted.

That week, Homewood’s chef Matt McCallister told his customers on Facebook that he was giving away chowder rather than tossing it, writing, “This week has been rough, hell the last 11 months have been rough.”

The big thaw truly started in March. Capacity restrictions were lifted at restaurants and bars. Our collective desire to slide into a familiar wooden booth for a margarita and bowl of queso — or anything — would no longer be quelled. Dining out could arguably be our most basic form of self-care.

We can measure that urge in drinks; the Texas state comptroller tracks liquor sales month to month. In February, mixed beverage receipts at Dallas restaurants and bars totaled $45.8 million; in March, that number jumped 61% to $73.7 million. May hit $85.4 million. That month, Texas logged an all-time record for booze sales. The delta variant surged in August and September, but in October, the latest dataset available, alcohol sales topped out at $94 million.

But unforeseen things have crept up. Factionalism over vaccines and mask mandates. Inflation on now hard-to-get goods like paper cups and to-go containers due to snarls in global logistics. Chicken wings are so expensive some restaurants have pondered changing their menus. Plus there’s a shortage of labor in the service industry, which was a problem before the pandemic, making it difficult for some restaurants to run at full throttle.

Just last week, Resident Taqueria canceled breakfast service because they can’t staff it. A bidding war of sorts has broken out for pastry chefs and cooks. Dishwashers are making a base salary unheard of in 2019: $10 per hour according to ZipRecruiter, $12.60 based on InDeed.com.

But you can’t keep a good gumbo down. Chefs and restaurateurs were anxious to get back to work. For all its ups and downs, 2021 brought a flurry of new restaurants from an assorted gang of heavy-hitters in the kitchen.

Among them was Tiffany Derry, the former Top Chef contestant and long-adored local chef, who in June opened Roots Southern Table, her homage to the food she grew up eating. She’d spent years searching for the right location and refining the concept.

“My partner Tom Foley and I know there is never a perfect time to start a new business, but I must agree that opening a restaurant this past summer amidst the continuing challenges of the pandemic was certainly not a perfect time,” Derry says. But they adjusted to the pandemic conditions with careful planning that included creating an open-air dining design and installing an air oxidizer to battle the virus. 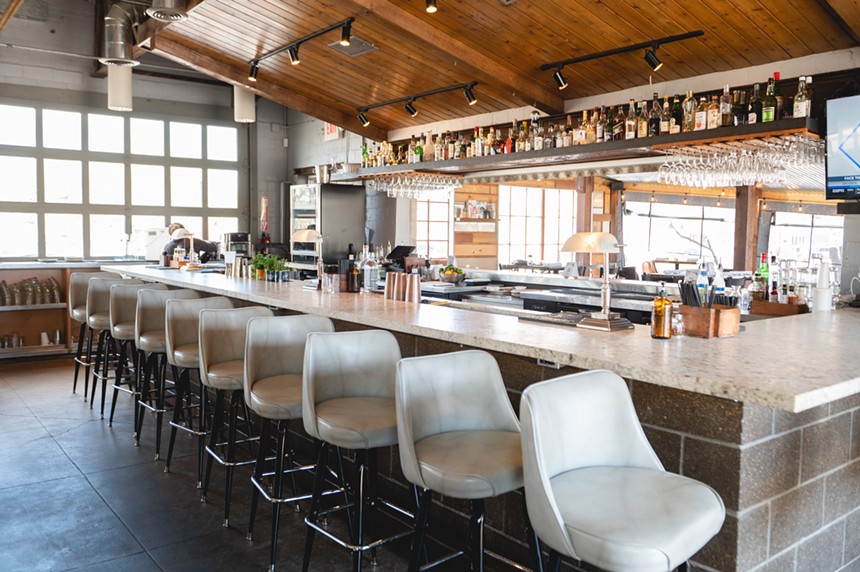 Encina opened in what was formerly Bolsa.
Alison McLean
Derry says she thinks the pandemic and the long lockdowns fueled a growing a need for us to come together. And she nailed it with a restaurant that’s an ode to Southern hospitality. In just a few months’ time, Roots has garnered national recognition from The New York Times as one of the top 50 restaurants in the country. And it came in at No. 19 on Esquire’s top new restaurants in the nation.

Roots wasn’t the only big opening this year. One sunny hot day in June, James Beard Award-winning chefs Tyson Cole and pitmaster Aaron Franklin stood around a parking lot near their soon-to-open restaurant in East Dallas, Loro. They chatted with foodies, passed out samples of bavette, whetting the appetites for their highly anticipated opening.

Entire communities of restaurants blossomed: Chef Junior Borges opened Meridian in The Village, flanked by a bevy of more casual eateries. AT&T Discovery District in downtown opened a high-end food hall with more than a dozen locally-owned stalls. There’s The Harwood District and Grandscape in The Colony. Both Flower Mound and Lewisville have restaurants on a riverwalk now.

Local restaurateur Nick Badovinus is instilling life into the newly branded East Quarter of downtown with his spot National Anthem, in an old building that once held the Observer’s offices. Deep Ellum is bustling with trendy spots, like Hattie B’s Hot Chicken and the UK-import Electric Shuffle. Oh, and should we even speak of all the hot chicken sandwiches that roosted in Dallas in the past year? It’s one after another after another.

Alas, along with the wave of new places, we lost some iconic spaces in Dallas this year too: Cosmic Café, Wild About Harry’s and Luna’s Tortillas y Hacienda all closed this year after decades of business. Great American Hero, the bright sandwich shop on Lemmon Avenue for the past 47 years, will close at the end of December. We also lost one of the first to arrive on the local craft brewing scene, BrainDead Brewing, as well as Anvil Pub in Deep Ellum. Trinity Hall pulled an Irish goodbye this year too.

All this is to say, while it’s a hard time for restaurants in Dallas, it’s also wonderful. A cornucopia of cultures, flavors and experiences are at our ravenous little fingertips. Which is what we hope this annual list of Top 100 restaurants is a guide to. 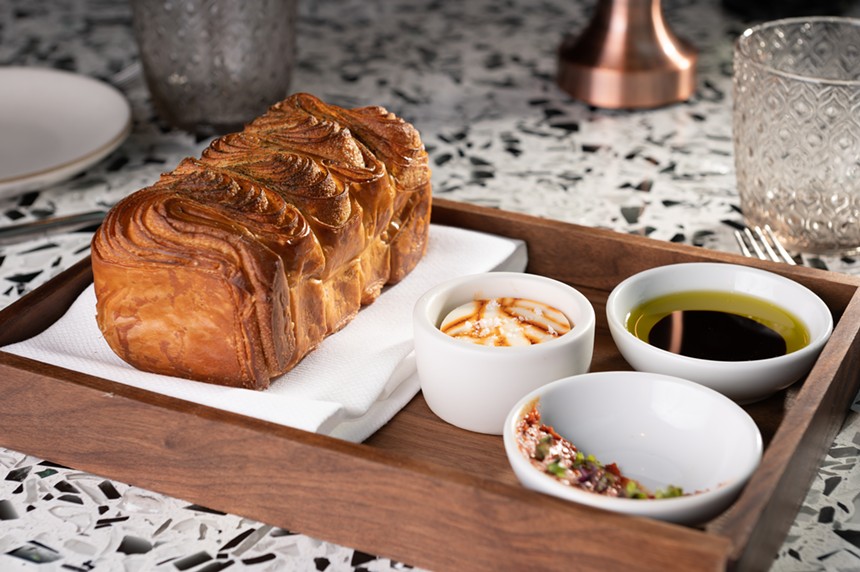 Daily bread and house-marbled butter at Meridian.
Alison McLean
We have 12 new spots this year — new to the list, not necessarily new to North Texas, although new to both in some cases — and you can find the full list, searchable by neighborhood and type on Top 100 Restaurants section. The new list has been updated, with some fine places falling off for no other reason than we found others our food writers like better. You will certainly disagree with some of our choices, but that’s cool: Friendly debates about which restaurant is better is part of the fun of eating out.

While there are some shiny new places, there’s also plenty of decades-old mom and pop kitchens, but for now, welcome these 12 additions to the fold, listed below and linked to the list in alphabetical order.

(Taylor Adams and Chris Wolfgang contributed to this story.)
KEEP THE DALLAS OBSERVER FREE... Since we started the Dallas Observer, it has been defined as the free, independent voice of Dallas, and we'd like to keep it that way. With local media under siege, it's more important than ever for us to rally support behind funding our local journalism. You can help by participating in our "I Support" program, allowing us to keep offering readers access to our incisive coverage of local news, food and culture with no paywalls.
Make a one-time donation today for as little as $1.