Remember just a few years back when the DMA was a completely different animal? Since the arrival of director Maxwell Anderson and tech guru Robert Stein, it feels like someone has opened up the windows. Let a little air in. Even did the neighborly thing and invited you over to hang out and slyly poke around their digs. The Dallas Museum of Art has taken massive strides, expanding its conservation department, boosting visitor engagement with its Friends program, improving information culling and tech connectivity, and making a grand offering of free admission. It's the ultimate public gift, and it's changing the cultural current of how Dallas perceives the art-viewing experience. Free admission allows art to integrate into our daily lives, rather than be a luxury or a special outing. Now you can pop into the DMA to see that thing your friend posted about without stressing over the cost of the visit or amount of time allotted to make it a worthwhile mission. And when you're there, you can't help but notice a change in the tone of the space. Everyone just seems happier, from staff to visitors. It's a valuable gift to our community and deserves eternal praise. Good work there, DMA.

Ken Price at the Nasher

What you could not understand until seeing Price's work, assembled and justly arranged as it was here, is the sum and scale of the items he created. When he began his career in the '50s, Price worked intimately, with a focus on jug-like vessels and petite cups. The life that would eventually spring from those — the grandly bending, sensual tubes, eggs and geometric links that bridge them all — grew larger in scale but remained focused on connectivity and human interaction. From a distance, the collection resembled primordial creatures on a psychedelic planet. Up close, they looked like life incubated from a beautifully vibrant petri dish. Were it not for the Nasher's commitment to funding and curating shows of this magnitude, Dallas would never have had the privilege to experience this stunning retrospective. Perhaps more important, the exhibition was so cunningly arranged that it left us feeling elated, joyful and appreciative of Price's lifelong drive toward innovation.

When Deep Ellum's newish property management company, Deep Ellum 42, a group that's gained local support by pledging to retain the initial points of interest in old, vacated neighborhood haunts, met Apophenia Underground, the area's newest guerrilla art collective, something amazing happened. Jeff Gibbons and Justin Ginsberg — the humans behind the secretive art group — pitched an unlikely plan: They asked Deep Ellum 42 if they could use those empty buildings, many of which had no electricity, as short-lived art spaces. Not only did Deep Ellum 42 agree, they handed them the keys to an unleased city. Since that first show in February the neighborhood has turned into a cutting-edge, ephemeral scavenger hunt. On select night windows are simply lit up with GIF or video art, heavily curated group shows and solo works by local favorites. It's a game-changer for a time when emerging talent has risen to the surface, demanding the same attention as the more traditional gallery-repped circuit. Plus, it has made finding art a thrill while using the city's existing infrastructure. And by plopping it all in an area of heavy foot traffic, it has encouraged passersby to have unexpected interactions with beauty, merging the gallery scene, innovation and public art together.

From Ari Richter's The Skin I Live In, which utilized body cast-offs from humans and animals for sculptural purposes, to That Mortal Coil, the group show examining body beautiful through a jagged, kaleidoscopic group show, we've learned CentralTrak is content to be unpredictable, at times alarming and always informative. Isn't that precisely what you want from art? Moreover, isn't that what you'd hope would rise out of a "go do it" art incubator like CentralTrak? Of course it is. Still not convinced? They've had gallery shows for dogs, feminist porn night, time travel and hosted a pop-up art video game arcade. Were that not enough, CentralTrak's monthly "Next Topic" speaker series and panel discussions keep the important conversations whirling about, stirring ideas about both the art on display and the issues facing artists working in Dallas, right now. 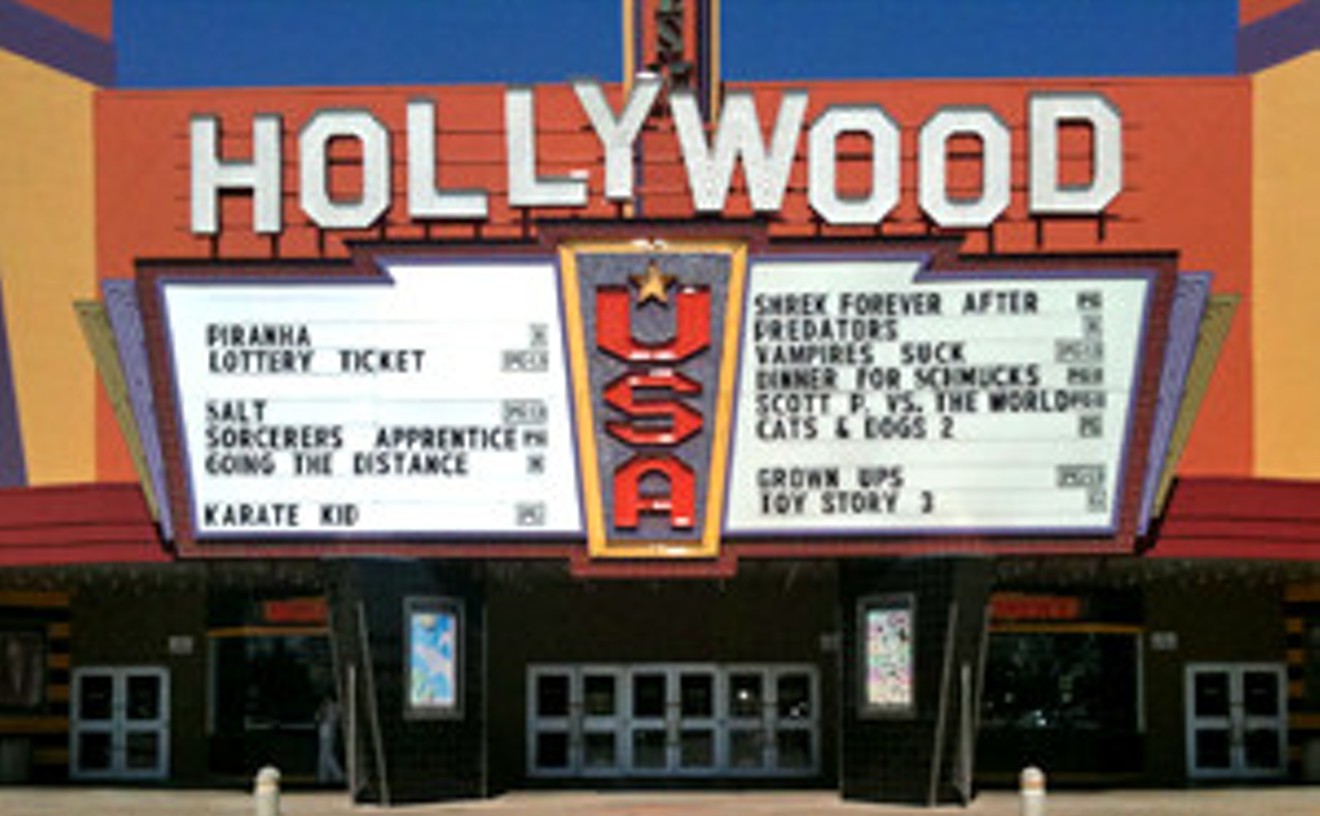 This one's not really a first-date idea. It's more an outing with your significant other when it's raining, you're broke and if you stay at home one more second you'll stab each other's eyes out with the silverware. Prevent blindness by making the trek over to Cinemark Hollywood USA, where you'll pay $1 to see everything you were slightly too lazy to catch when it was in regular theaters. While you're there, enjoy the dusty arcade games, the equally dusty photos of old-timey film stars and a terrifying, dizzying decorating theme best described as "Circus in Hell." Seriously, don't take a first date here.

When SMU contracted Dutch artist Joost Vrouenraets to choreograph a new version of Rite of Spring for the piece's centennial celebration, we thought, "Huh, that's ballsy for a private Methodist university." When we went to dress rehearsals and saw that the dancer was using the piece's anarchic legacy to push through subversive theories about social media's influence on a new generation, with the aid of schoolgirl uniforms and a sexually aggressive marionette, well, that's when we realized something much bigger was brewing. The end result had potential to start its own spectacular riot, as young writhing dancers clutched themselves and each other, trapping their frustrations inside custom-built rolling greenhouses. It ran both at SMU and as the showcase closer for the Meadows' annual fund-raising performance at the Winspear, and while we're still unclear how the powers that be let it get that big, we're thankful that it did.

State of the Arts: Art and Technology

Remember when Wolf Blitzer's hologram beamed in to cover the 2008 presidential election? You pulled out your flip phone, called your best friend and were like, "Whoa"? Well, what a difference a few years make. Technology has advanced so exponentially that it has affected the arts in ways that ethics and law haven't been able to predict. KERA's Art and Technology panel brought together Nancy Hairston, an artist and brilliant mind in 3-D printing; UTD's Dr. Roger F. Malina, a man who's doing big work blending hard science with new media; and Robert Stein, the DMA's deputy director and force behind many of its recently applauded innovations. It was, hands-down, the most fascinating conversation on the arts held in Dallas last year and it addressed issues that we hadn't realized were becoming problems. It also brought to surface the new limitless direction that art is pointed in and the potential it has with a fresh generation of emerging talent. If you missed it, listen to the recording on the DMA's website. It's 81 minutes well spent.

Hey guys, remember SZOAS? No? Well, that's all right. The local artist representation company was extremely short-lived, but its time here didn't go unnoticed. While it was operational, SZOAS introduced two gems from their talent roster who should have paired up ages ago. Clay Stinnett and Nevada Hill are both Southern, unconventional and a little loose with the rules. Using Clay Stinnett's freaky salute to our charred corn dog king, a painting of Big Tex on fire, Hill added his own oozy layers of psychedelic design. Equal parts celebratory and demonic, the limited-run screen-printing and corresponding T-shirts morphed into a deliciously perverse union. The only way it could have been better is if the pair had battered and deep-fried the thing.

Tuesdays at the Modern 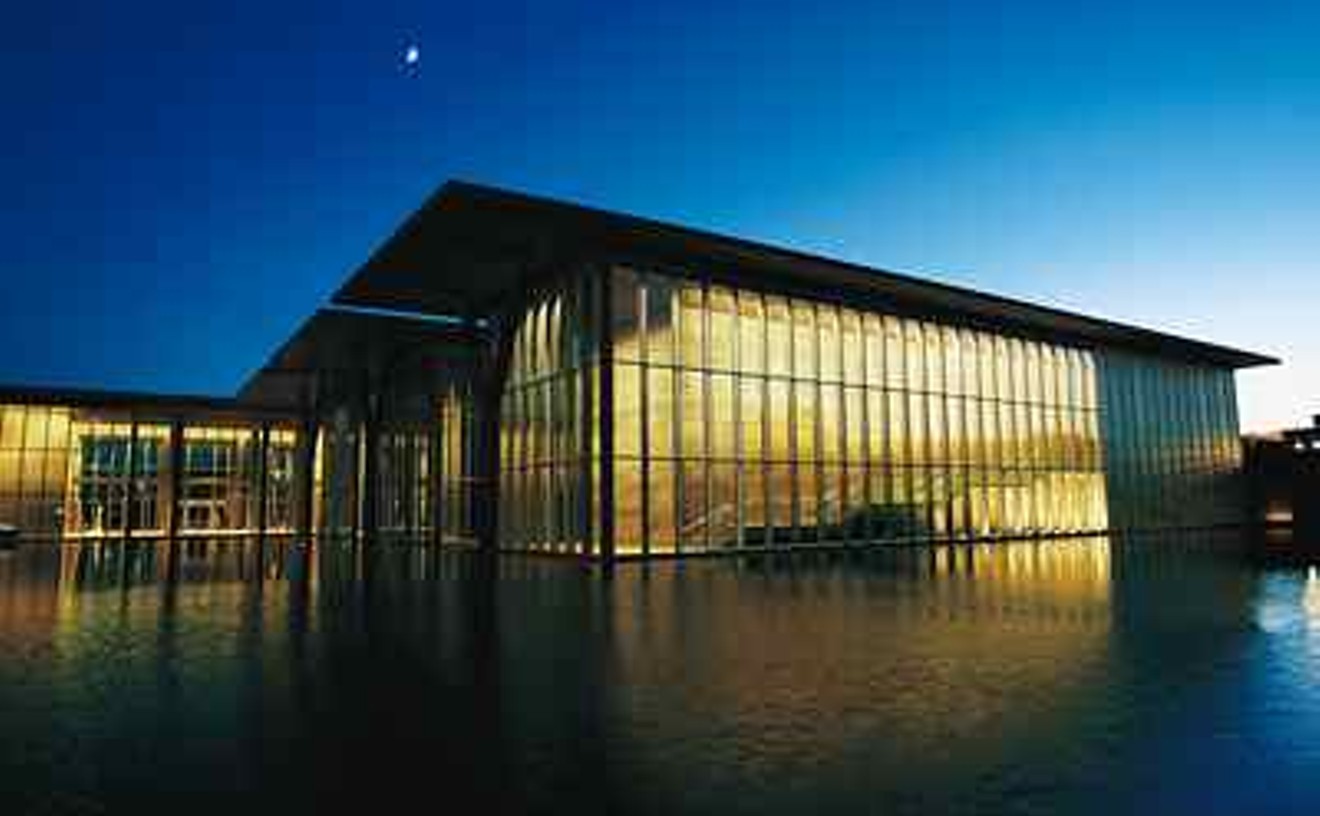 We're fortunate to have such a robust lineup of artists and curators speaking in our local museums, but last year's run of Tuesdays at the Modern raised that conversation up a step. In honor of its 10th anniversary acquisitions, the culture hub brought in the biggest names in contemporary art for these intimate, free events. We took a Dallas-to-Fort Worth arts pilgrimage to hear experimental guru Bruce Nauman discuss his story and process. We trucked over to Cowtown again to hear the humble and humorous Jenny Holtzer rap about her public art legacy and did it again for cult icons Trenton Doyle Hancock and Barry McGee. It was like ART21 exploded to materialize in three dimensional space. It was the arts equivalent of seeing rock stars eating in public. It was a nerdebration. It was that good.

While Jaap van Zweden has things handled over at the big-market symphony, taking our musicians around the world to garner international acclaim, there was still a gap in the more experimental small-orchestra sector. Enter scene: Dallas Chamber Symphony. Conductor Richard McKay led the group through its inaugural 2012-13 season at the Dallas Performance Hall, and we sat thrilled, listening as they blended both new and old. There was a youthfulness brought to these offerings, merging more standard, popular works like Beethoven's Symphony No. 7, Mozart's "Overture to the Marriage of Figaro" and selections by Schumann and Brahms with live scores to two silent films and solo piano performances. This type of creative energy is what Dallas needs if it wants to court a new generation of classical music fans. And by the look of DCS's upcoming season, which has not one but two nods to Buster Keaton in the lineup, Dallas Chamber Symphony is just the right group to do it.