OK, we'll forgive you if you spent about a week thinking Cowboys quarterback Tony Romo's All-American romance with local pop princess Jessica Simpson was adorably appropriate. After all, why wouldn't America's hot-and-ditzy princess want in on a little career Romomentum? But after the infamous pink jersey loss and the disappointments that followed, was there anyone in town besides bloggers hard-up for material who really wanted to see the couple last? Honestly, we're glad to see Romo's taken to an Entourage-like, Afflicton-attired existence. Sure, he's douche-y and less likable now, but when it comes to Cowboys football, we don't mind a little bros philosophy.

They say a lawyer who represents himself has a fool for a client, but that hasn't stopped Dallas attorney Gary Vodicka from waging thermonuclear war against Southern Methodist University over the last four years, alleging the school committed fraud as it went about amassing units in his condo complex, the University Gardens, only to tear them down to make room for the Bush Library. Vodicka became a genuine pain in the docket to SMU, humiliating the school, wearing down a whole team of its lawyers in a case that spans 25 thickly stuffed court jackets. Although he turned down a settlement offer of $1 million for his demolished condo unit, he finally settled the case in July for an undisclosed amount. Vodicka also managed to convince State District Judge Martin Hoffman to allow him to depose former President George W. Bush himself. The ruling didn't stand on appeal, but the fact that Vodicka got as far as he did was as amazing as it was unprecedented.

Glamourpuss: The Enchanting World of Kitty Wigs by Julie Jackson with Jill Johnson

Julie Jackson is a genius. Recession be damned, she nailed her ideal demographic and tapped into that ever-purchasing, wacky world of cat lovers with her company Kitty Wigs. And although the tiny, incredibly flattering and fashionable wigs instantly caused quite a stir when the company launched, over the last couple of years, the public began wanting even more. Along with her boy-cat Boone, Kitty Wigs photographer Jill Johnson, and 25 other feline models and their owners, the Kitty Wigs creator has turned fashion into published art with the creation of Glamourpuss: The Enchanting World of Kitty Wigs. The tome features 60 photos featuring all manner of tiny wigs and their whiskered wearers. While it took around two months for Jackson and Johnson to shoot and gather all the photos for the book (featuring recognizable locales such as Lee Harvey's), it's safe to say the page-flipping pleasure will last much longer. 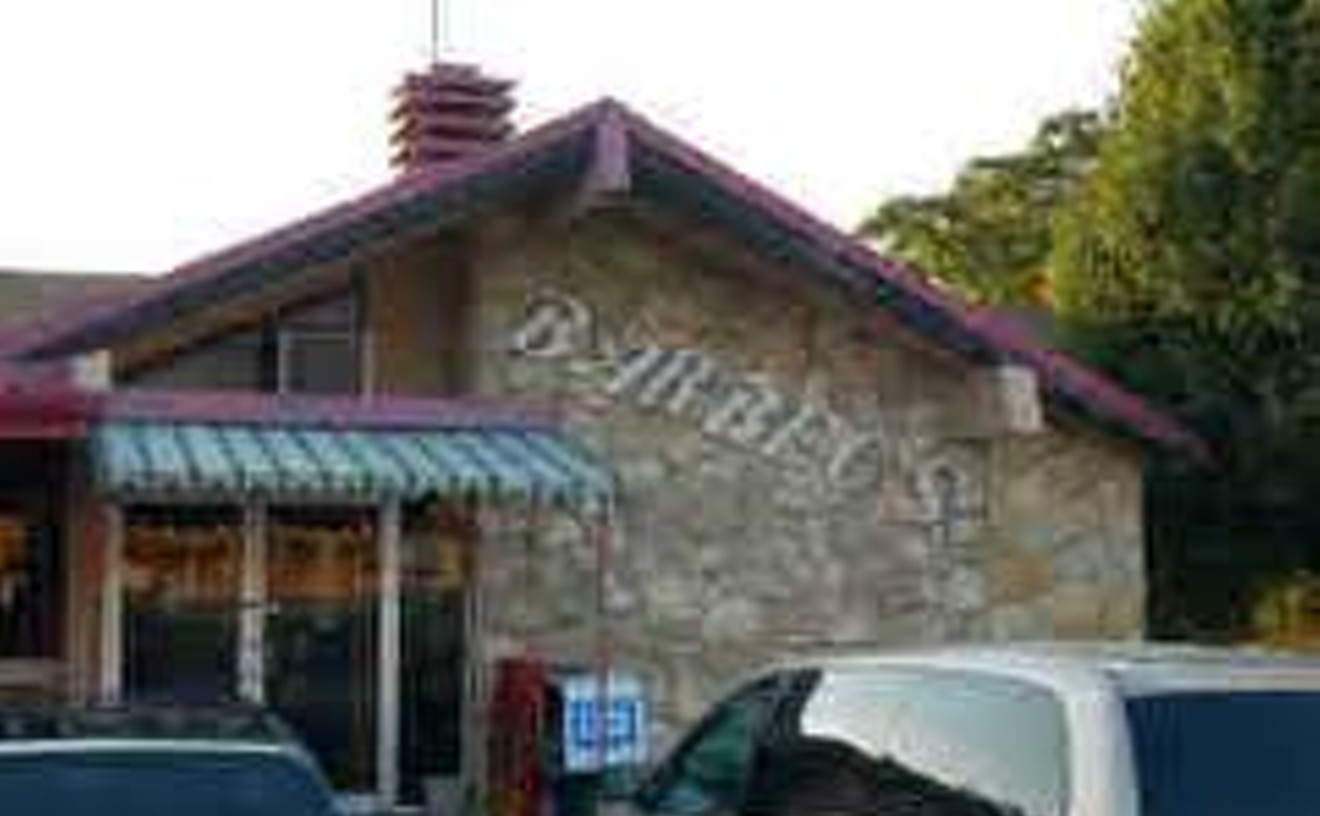 It's no secret that a greasy breakfast complete with Barbec's legendary beer biscuits is one of the best hangover cures in Dallas. If you find yourself treating your date to one of their famous breakfasts (lucky you), don't forget to stop by the free zoo that is Boutique Pet Shop, where the cuddly guinea pigs, flashy saltwater fish and adorable love birds will help melt the heart of that special someone. Then head home and do as the rabbits do.

All right, Mr. or Ms. Readerpants, wherever you may be, we already hear you groaning and going on about how predictable we are, choosing Angela Hunt again as Dallas' best city council member, playing favorites. This is the third time we've done it since 2007. Well, you know, that's the predicament we're in. They don't call these awards the "OKs of Dallas." This is the Best of, and she is the best. Look at it this way. Try going through the rest of the city council by elimination. Let's see what all the cliques are: You've got your crooks, your socialites, your suck-ups, your sleepyheads. So, yeah, who would you pick? Vonciel Hill is smart, but she tends to linger too much in the shadow of the mayor. We've got hopes for new members Delia Jasso and Ann Margolin, but you can't buy groceries with hope. The thing about Hunt is that she's money in the bank. As Hunt begins her third two-year term on the council, we see her adding a whole lot of seasoning and steel to an already well-formed character as the smart maverick. She isn't a member of a clique, but she gets along well with those who are. She knows when to hold 'em, as she has on the Trinity River, but she knows the even harder thing—when to fold 'em, as she did on approval of the bonds for the new convention hotel. She'd make a great mayor. She's probably too smart to go for it, which is our loss. But we'll make a deal with you. If she ever does become the mayor of Dallas, we'll make a sincere effort to find somebody else who deserves Best Sitting Mayor of Dallas more than she does.

This scripted Web series launched in early August, but even at its onset, it was clear that the folks behind the serial shorts were on to something kinda special. Self-produced by Richard Neal and his staff at Zeus Comics (4411 Lemmon Ave., Suite 105), the series promises a look at the comic book world "from the other side of the counter." And that's just what it offers: a Clerks-like (but better acted), sexually charged paean to geekdom that references names and topics only recognizable by the nerdiest of collectors. But even amongst the insider chatter, the series scores laughs by focusing on the neuroses and awkward compulsions of the store's employees. The Variants is pretty entertaining stuff—so much so that you pretty much forget that you're watching what essentially amounts to a nine-minute commercial for the store.

As the title character in Matt Lyle's silent film homage The Boxer, Jeff Swearingen, 31, showed off physical comedy finesse inspired by Keaton, Chaplin and maybe a bit of PeeWee Herman. He teamed with Lyle again to play Blork, the Franken-Romeo in the silly-romantic Hello Human Female. A veteran of several improv groups, the actor got his start at The Dallas Hub and has worked with theaters all over North Texas. Next he'll play an alcoholic magician in Audacity Stage's Milky Way Cabaret in November. And look for him as Ebenezer Scrooge (his favorite character) at Plano Community Theatre. When did he realize he was funny? "When I was about 6, a group of adults were talking about how funny Bill Cosby was, and my older brother walked up and informed them that nobody was funnier than I was," Swearingen says. "I learned comedy by making my brothers laugh." When Swearingen is on a stage, everybody laughs.

Since her local theater debut in Dallas Children's Theater's Charlotte's Web in 2005, this UT-Austin grad has been popping up in comic roles on both sides of the Trinity. Shivers, 29, was a stitch as the lady cop in Circle Stage's hit Unnecessary Farce and made Ochre House audiences roar as Timmy in Matt Lyle's Hello Human Female. Inspired by Carol Burnett and Lucille Ball, Shivers says she dreams of playing frazzled maid Dotty Otley in the ultimate farce, Noises Off. Shivers' secret of comedy success? "Just be fearless. If you're playing it safe, it won't be as funny as it can be. Don't be afraid to look like an idiot." 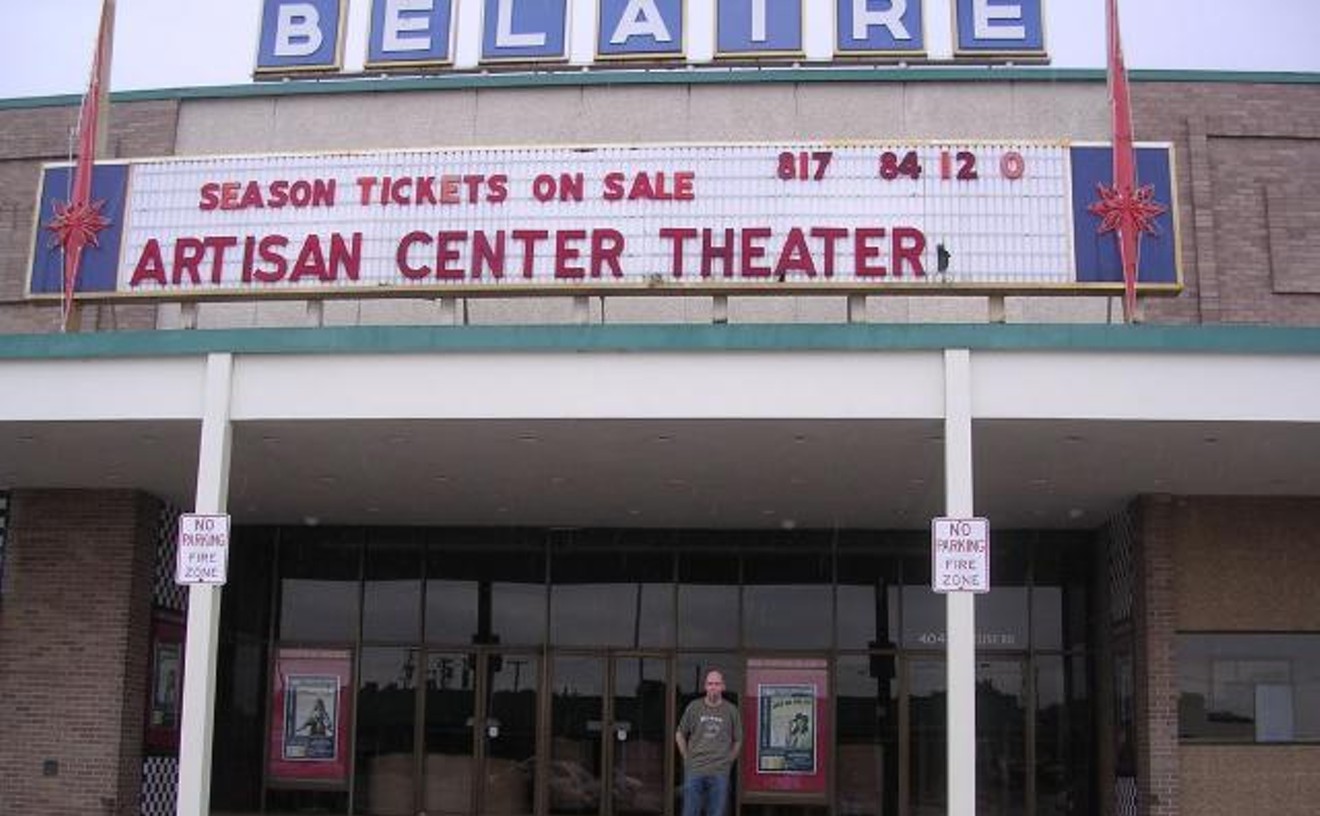 Proprietor Richard Blair has created a community theater beloved by its surrounding community. There's never a weekend dark at this 150-seat, in-the-round playhouse tucked beside an old movie theater in a Hurst shopping center. Double- and sometimes triple-casting roles, Artisan gives amateur actors lots of work in shows like My Fair Lady, Grease, Nunsense and other family-friendly titles. The house is always full (tickets are only $12), and the atmosphere is casual (snacking is allowed and encouraged). The recent hiring of Broadway veteran John Wilkerson as full-time artistic director is a good sign that Artisan's already popular shows might be getting more professional polish.

If you find yourself in the unfortunate position of being charged with a petty crime and without sufficient funds to pay your debt to society, you'd be damn lucky if you landed in the courtroom of Teresa Tolle. A former nun, Tolle wears her compassion on her robe and is willing to buck the district attorney's standard plea recommendations for fines, and even the length of probationary periods, in order to accommodate financial hardship. Needless to say, she is adored by the criminal bar, though prosecutors may worry that her standard of proof is different from theirs. But in a job in which seeing humanity's masses daily offer lame excuses for conduct that ranges from the cruel to the idiotic to the benign, she manages to care. And that says something.